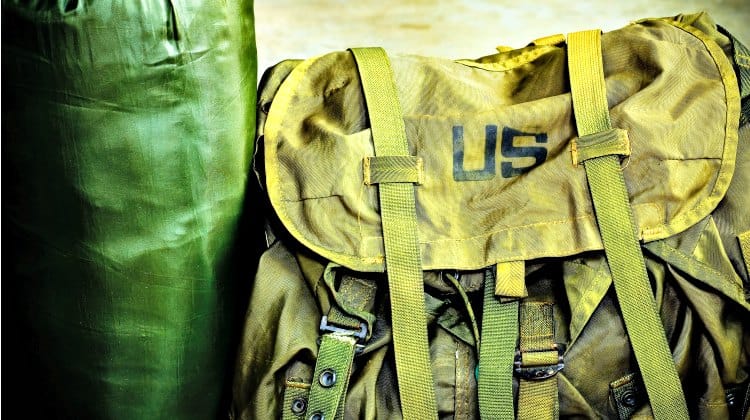 ALICE packs were originally designed for use by the United States Army, adopted in 1973 as a lighter alternative to the previous standard-issue backpack.

Since it was so widely used (and continues to be used, in small capacities) by the military and is available for much cheaper than most packs that were designed specifically for backpacking, many people who already own an ALICE pack or who are hoping to save a few bucks consider using them for backpacking.

But, is an ALICE pack good for backpacking? The short answer is not particularly. ALICE packs tend to be much heavier than, say, an equally sized Osprey or Arc’teryx backpack which are designed with long-distance hiking and comfort in mind. ALICE packs are also bulkier and more cumbersome to carry, and just generally uncomfortable for extended wear.

If you are considering a day hike or a short overnight trip, an ALICE pack will suffice for carrying your camping gear, but for anything longer and especially for a thru-hike, you’ll want to invest in a comfortable lightweight backpacking pack.

What Does ALICE Stand For in ALICE Pack?

The pack system could be used in conjunction with the belt and suspenders in order to carry even more gear.

The essential design of ALICE packs is one large compartment with three smaller compartments on the exterior. The ability to attach other accouterments on the belt, shoulder straps, and gear loops of the pack itself means these packs are somewhat modular and can be reconfigured for different purposes and pack weights.

Although originally designed to include a small, medium, and large size option, only the medium and large ALICE packs were deemed necessary by the military after testing. However, there have since been non-military-affiliated small ALICE packs created.

As I mentioned, non-military-affiliated size small ALICE packs exist and are sold by retailers like armysurplusworld.com. This small size pack measures 13 x 16 x 7 inches, and is not designed to be used with a frame. However, since there was never an official small ALICE pack, there are several different types and sizes available.

For this particular example of the small pack, it has a capacity of about 1,400 cubic inches or approximately 24 liters.

This is a basic version of an ALICE pack, with the classic design of one large main compartment and three smaller exterior pouches. The small packs have non-removable adjustable shoulder straps and do not include a waist belt.

Due to the small size of this pack, it would not be appropriate for backpacking, unless you pack extremely light. It would be best suited for a day hike or for casual use.

Medium ALICE packs can be used with or without a frame, and it is recommended to carry up to 50 pounds of gear. The dimensions of the main compartment are 19 x 11.5 x 9.5 inches and the three additional pouches each measure 5 x 2.5 x 9 inches, which brings the total capacity to approximately 40 liters, or 2,412 cubic inches.

You can purchase brand new medium-sized ALICE packs that are made in the U.S., although since they are discontinued military items and are no longer in production, supplies may be limited.

These packs come with the aluminum pack frame as well as an extra-wide kidney pad and padded shoulder straps to make carrying heavy loads more comfortable.

Medium ALICE packs are more feasible for backpacking, especially when used with the aluminum frame. However, keep in mind that most modern backpacking packs are designed in such a way that they can forgo heavy metal frames and still manage loads and weight distribution well, while also being more comfortable.

The large size of ALICE packs must be used with a frame and it can hold more than 100 pounds of gear. However, if you are carrying 100 pounds of gear while backpacking, you will probably become tired extremely quickly and may need to reevaluate your gear.

The large size of ALICE pack measures 22 x 6 x 14 inches for the main pouch and has six external pouches in all, which total to about 3,800 cubic inches or approximately 62 liters. It has three external utility pouches plus three mag pouches which, obviously, for backpacking could be used to carry things other than ammunition.

While these packs are extremely rugged and withstand quite heavy loads and abuse, they are easy to overload to such an extent that it can be difficult to lift the pack.

Pros and Cons of ALICE Packs for Backpacking

Also read: What Size Backpack is Good for Backpacking?

Other Military Packs That Can Be Used For Backpacking

The military has since replaced nearly all ALICE packs with two generations of MOLLE packs and the even newer ILBE and FILBE packs. These packs have been significantly improved in terms of comfort and weight when compared to the ALICE packs, as I’ll briefly outline here:

MOLLE packs are currently on their second iteration and are widely used still by the U.S. Army and several other NATO armed forces. They were introduced in 1997 and have been revamped in order to be effectively used with other ever-changing components of military gear like body armor and so forth.

These packs are overall less bulky and more comfortable and customizable than ALICE packs, although they might still be overkill for a backpacking expedition.

ILBE packs were designed for the U.S. Marine Corps by Arc’teryx (a high-end outdoor outfitter that specializes in recreational backpacking pack design) as a part of the LEAF (Law Enforcement and Armed Forces) program. This pack also uses the PALS system to attach modular equipment pouches.

These packs were eventually redesigned to accommodate the latest Marine Corps body armor systems, which led to the introduction of FILBE (Family of Improved Load Bearing Equipment) packs. FILBE packs are perhaps the most well-suited for recreational backpacking since they employ modern technology to make them relatively comfortable and more ergonomically designed for long-distance hiking.

However, they are still heavier than a recreational pack and are overbuilt for a backpacking expedition.

While ALICE packs are certainly rugged and capable of carrying all the gear necessary for long backpacking trips, they are uncomfortable, unnecessarily heavy, and employ outdated 50-year-old materials and technology.

In my opinion, it’s telling that the Marine Corps opted to have Arc’teryx design their more recent packs, because Arc’teryx is quite invested in creating comfortable, extremely lightweight, and very functional recreational packs, which undoubtedly can be modified to serve the military’s purposes.

While you may be able to save some money by purchasing a military pack rather than a recreational pack, it’s not worth it. Plus, retailers like REI sell backpacking packs at quite reasonable prices and offer several sales and discounts throughout the year which lower prices even further. They also offer lifetime warranties — something you definitely won’t get from the military.

Up Next In Backpacking Gear:

Are MREs Good For Backpacking?