Backpacking cots can be a nice way to add a bit of extra luxury and comfort to your camping setup. They let you elevate your sleeping system up off the ground, which can provide better airflow in the summer and insulation from the ground in the winter.

But are backpacking cots actually worth it? Couldn’t you just use a sleeping pad instead?

Backpacking cots can be worth it, but it really depends on your personal camping style. If you’re an ultralight hiker or someone who wants to keep weight and bulk at a minimum in their pack, a backpacking cot probably isn’t a good choice. For comfort-focused trekkers, on the other hand, the advantages of cots for backpacking are tough to deny.

There’s a lot of debate in the camping community over whether backpacking cots are worth the extra money and weight. In this article, we’ll take a closer look at the pros and cons of these nifty pieces of gear and explore whether or not using a cot while backpacking is that much better than a sleeping pad.

When a Backpacking Cot is Worth It

Backpacking cots can definitely be worth it if you’re the type of camper that prioritizes comfort above all else.

Some backpackers love to use a cot while in the mountains because they provide a mix of comfort and convenience. Since cots elevate you up off the ground, they make it easier for you to pitch your tent on a wide range of different surfaces without increasing your risk of popping your sleeping pad or getting a bad night’s sleep.

The raised nature of backpacking cots also serves a dual function of providing comfortable airflow under your sleeping bag during the summer months and a bit of insulation from the cold ground in the winter.

But backpacking cots do come with their downsides. 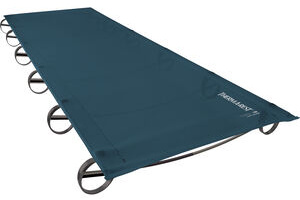 In particular, the average backpacking cot tends to be heavier and bulkier than an inflatable sleeping pad. Most people find that they need to use a sleeping pad on top of their cot during the shoulder season and winter for warmth anyway, which only adds more weight to their packs.

The other downside to cots is that they can be quite expensive. Sure, there are a lot of very expensive high-end inflatable sleeping pads out there. But if you want a backpacking cot that weighs less than about 3 lbs but is also reasonably durable, you should be prepared to fork over a sizable chunk of change.

So the take-home message here is ultimately that, yes, a backpacking cot can be worth it, but it really depends on what you value in your gear on a camping trip.

Can You Take a Cot Backpacking?

You can definitely take a cot backpacking. However, many cots that are made for car camping are much too heavy and bulky to carry on your back. Some of these car camping cots are made from steel and they can weigh upward of 70 lbs, so they’re not practical for backcountry adventures.

If you want to take a cot backpacking, you’ll need to invest in a lightweight and highly compact model like the Helinox Lite Cot or the Therm-a-Rest Mesh Cot. Otherwise, you may struggle to carry your cot in the mountains.

Is Sleeping on a Cot Better Than the Ground?

Sleeping on a cot has a lot of advantages over sleeping on the ground, but it’s not necessarily any better for you.

Some of the main advantages of sleeping on a cot include:

That said, there are some notable drawbacks to sleeping on a cot, too. In particular, some people find that cots can be a bit creaky and noisy especially as they get worn out.

Plus, unless you put a mattress or sleeping pad on top of your cot, the cot surface won’t actually provide that much padding. This can take some getting used to, especially for people who sleep on plush mattresses at home.

Do You Need a Mattress for a Camp Cot?

You don’t need to use a mattress on a camp cot, but doing so is highly recommended. Many people find that camp cots aren’t as well padded as they’d expect, which can make sleeping a bit uncomfortable.

If you’re used to sleeping on a soft mattress at home, then layering an air mattress or an inflatable sleeping pad on top of your cot can greatly increase your comfort at night. The downside is that your mattress can slide around on the surface of your cot at night, which can be annoying. So it’s worth testing your cot out both with and without your mattress to see which option you like best.

Cots for Backpacking: The Final Verdict

Backpacking cots have long been some of the most underappreciated pieces of gear in the outdoor industry. While cots are fairly popular in the car camping world, backpackers frequently overlook them in favor of lighter and more packable options like inflatable sleeping pads.

However, backpacking cots do have their place in the mountains, and they can be worth it for backpackers who want to be as comfortable as possible at night. If you’re willing to invest the money into a lightweight setup, it is possible to get a backpacking cot that won’t weigh you down too much on the trail.

Ultimately, whether or not you want to use a backpacking cot is a decision that only you can make for yourself. It’s up to you to decide if you’re willing to sacrifice some weight savings in the name of comfort or if you want to stick to your tried-and-tested sleeping pad. See you in the mountains!

Up Next In Backpacking:

Can You Sleep in 30 Degree Weather?

What Meats can you Take Backpacking? (8 Tasty Options)

What is a Good Pace for Backpacking? (terrain, pack weight, experience)