Of all the critters you might encounter during your hiking and camping adventures, few invoke as much worry and fear as snakes. Depending on where you live, venomous snakes may be a major concern during any trip into the great outdoors.

But the question remains: Are snakes a problem when camping?

Snakes typically aren’t a problem for campers. Snakes aren’t particularly attracted to human food and they are usually scared of people. As a result, they don’t usually seek out opportunities to slither around campsites.

That said, even though snakes aren’t normally a problem when camping, anyone heading outside should know what to do if they come across one of these critters during an outing. In this article, we’ll take a closer look at some of the most common questions that people have about snakes so you can be better prepared for all your future adventures.

Snakes and Camping in North America

As a general rule, snakes aren’t a major concern for most campers in North America.

Sure, if you’re going camping somewhere like Australia or anywhere else that happens to have a large number of highly venomous snake species, you should definitely have snake safety on your radar whenever you head outside. But for most people in the US, Canada, and other places where venomous snake species aren’t all that common, these slithery reptiles usually aren’t a big issue.

The reality is that snakes aren’t as attracted to human food as bears, raccoons, and rodents are. They also tend to be quite shy around humans, so it’s unlikely that a snake would specifically seek out your campsite when they could be out hunting for prey.

Of course, if you happen to set up camp where a snake makes its den, it’s possible that a snake might crawl around your tent at night. Many snakes are also attracted to rodents (one of their main food sources), so they may be attracted to heavily impacted areas that have lively rodent populations.

But, in general, snakes shouldn’t be at the top of your list of concerns during a camping trip. Most snakes want nothing to do with us humans and taking a few basic safety precautions can limit your likelihood of a negative snake interaction in the mountains.

For example, watching your step when walking around can help you avoid any snakes that might be hanging around your campsite. You can also wear close-toed shoes and long pants whenever walking through rocky areas and forests to provide yourself with some extra protection should you accidentally startle a snake.

If you are especially nervous about a potential bite, consider gaiters over your pants and closed toe hiking boots.

In the event that you do encounter a snake, stay calm and don’t pick it up. Keep your distance from the snake and back away slowly to avoid startling it. If you get bitten by a snake, seek out medical attention immediately. 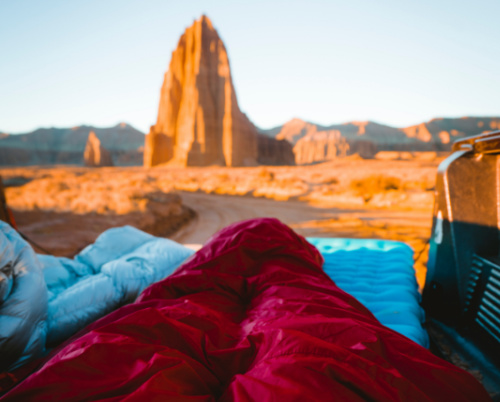 Yes, theoretically, a snake can enter a camping tent if there’s a hole in the tent that’s large enough for the snake to slither through. But if you’re keeping your tent in good condition and making repairs to rips and tears as needed, there shouldn’t be any holes in your tent that are large enough to fit a snake.

Additionally, snakes are normally very shy around people, so it’s unlikely that one would choose to go into your tent on purpose. If snake encounters are something you’re particularly concerned about, you can reduce the chances of having one of these critters in your tent by inspecting your shelter for large holes each night before you head to bed.

Can Snakes Bite Through Tents?

Technically speaking, most adult snakes can bite through tents. However, the chances of this happening aren’t very high.

It’s also worth pointing out that most of the people who get bitten by snakes receive their injuries because they attempted to pick up or hold a wild snake. While people do sometimes get bitten by snakes after accidentally startling them, these sorts of incidents aren’t all that common.

Furthermore, snakes rarely ever seek out opportunities to bite humans without being provoked. So, while it’s technically possible for an adult snake to bite through the thin fabric of most tents, it’s very unlikely that this will happen—even if you’re camping in an area with a lot of snakes.

Do Snakes Crawl Into Sleeping Bags?

No, snakes don’t normally crawl into sleeping bags, especially if your sleeping bag is tucked away and zipped up inside your tent. However, it is possible to find snakes in your sleeping bag as some snakes will seek out the shade and protection that your tent provides on a very hot day.

But having snakes in your sleeping bag isn’t particularly common, so it’s not something to lose sleep over before your next camping trip.

Should You be Worried About Snakes While Camping?

Snakes, like all wildlife, are a concern whenever you spend time outside. However, snakes aren’t as big of an issue during camping trips as many people might otherwise suspect.

It is possible to get bitten by a snake when camping, but these types of injuries aren’t very common in North America. Most snakes don’t want anything to do with humans and they’ll normally steer clear of you if they sense your presence.

That said, some basic snake awareness can go a long way toward keeping your distance from these critters when in snake territory.

Consider wearing close-toed shoes and long pants whenever you hike in areas with known venomous snake populations. Be cautious whenever trekking through boulders and forested areas as these are great places for snakes to hide.

If you see a snake, maintain your distance to avoid provoking it, and if you get bitten, seek out medical attention as soon as possible. Above all, stay aware of your surroundings at all times while camping to reduce your chances of accidentally startling a snake during your adventures.

How Do You Bear Proof A Tent?