If you’re shopping for a new pair of hiking boots, at some point, you’ll come across the term ‘Gortex.’

The world of hiking footwear is full of lingo and jargon, which can make it tricky to figure out what you’re actually buying. So the question remains:

What does Gortex mean in boots?

Gortex, or more properly, Gore-Tex (GTX) is a type of waterproof-breathable material that is used in a wide range of outdoor clothing from rain jackets to hiking boots. It’s one of the most famous waterproof fabrics out there, and getting boots with a Gore-Tex liner is a popular choice among hikers.

Of all the many different fabrics that are used in the outdoor industry, though, few evoke as many questions as Gore-Tex. In this article, we’ll take a closer look at what Gore-Tex is, how it works, and if it actually makes your boots waterproof in the mountains.

Gore-Tex is a brand name for a type of waterproof and breathable fabric membrane. It’s the flagship product of W.L. Gore & Associates, Inc., and it was developed in the late 1960s.

Gore revolutionized the world of outdoor gear manufacturing using a novel material called ePTFE (expanded polytetrafluoroethylene). The company eventually developed its own proprietary fabric out of this material that it now calls Gore-Tex.

Nowadays, you can find Gore-Tex in pretty much any outdoor-related clothing item where breathability and waterproofing are key. This includes rain jackets, rain pants, hats, gloves, and, of course, hiking boots.

It’s worth noting that there are now many other similar waterproof-breathable membranes out there, like eVent, BDry, and Pertex Shield. All of these fabrics are similar to Gore-Tex but they have their own unique construction so they’re not exactly the same.

The quick answer to this question is yes and no. But of course, this isn’t really a useful answer in its own right. That’s why it’s important that you understand how Gore-Tex works before we can dive into whether or not Gore-Tex boots are really waterproof.

Gore-Tex is made with a type of material called an ePTFE (expanded polytetrafluoroethylene). This ePTFE is, as its name suggests, a type of PTFE that’s been expanded. In the expansion process, this PTFE material develops microscopic pores (9 billion per square inch, to be exact) that are 20,000 times smaller than your average water droplet.

The fact that these pores are so much smaller than a water droplet is important because that’s what stops water from soaking through Gore-Tex fabric. In other words, these pores are ironically what makes the fabric waterproof.

But what makes Gore-Tex special is that these pores are just large enough to allow water vapor molecules to escape. In fact, each of these pores is 700 times bigger than a molecule of water vapor. As a result, Gore-Tex keeps rain out while also letting your sweat escape as you hike.

However, the technology behind Gore-Tex is just one part of whether or not your boots are waterproof. 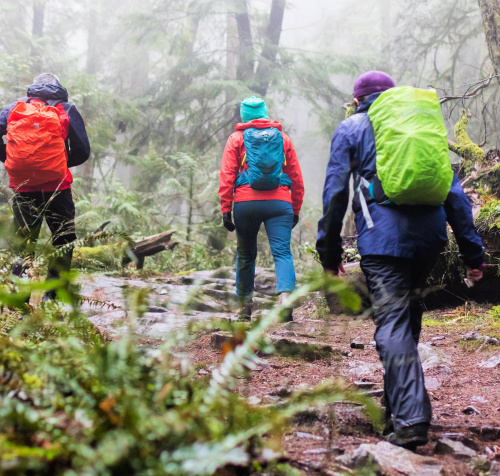 The reality is that even brand-new waterproof boots with a Gore-Tex liner will fail to keep you dry when placed in unrealistic situations. For example, if you’re wearing Gore-Tex hiking boots but cross a river that’s up to your waist, your Gore-Tex won’t keep your feet dry because the water will rush in from the top of the boot.

It’s also important to keep in mind that Gore-Tex can feel like it doesn’t work, even when it’s actually performing just as it was intended. There are two main situations where this happens: when you’re sweating a lot on a rainy day and when you’re using old or dirty gear.

If you’re sweating a lot as you hike on a rainy day, it can feel as though your Gore-Tex boots aren’t keeping you dry even when they are. That’s because your feet will get all wet from, well, your sweat, but your brain will equate that wetness with the rain. Although Gore-Tex is breathable, it’s not a miracle worker, and there are some situations where you’ll sweat so much that the Gore-Tex doesn’t perform as planned. Alas.

Conversely, if you’re using a dirty or older garment that’s made with Gore-Tex, it may feel as though the Gore-Tex isn’t working. That’s because you may have dirt and oil clogging up the pores of your jacket or boots’ Gore-Tex liner. This stops the Gore-Tex from breathing well, which can also drench you in sweat. Yuck.

A good wash according to Gore’s guidelines and reapplication of a durable water repellent can do wonders for your gear (check Gore-Tex’s guide to how this works for specific advice). But in some situations, you may just need to get a new piece of gear.

So the moral of the story here is that Gore-Tex boots do actually work, but they have their limitations—just like any other piece of gear.

What Are The Disadvantages of Gore-Tex?

While Gore-Tex is a popular feature in many pieces of outdoor gear, it does have its drawbacks. Some of the main disadvantages of Gore-Tex include:

When brands use Gore-Tex fabric, they have to license its use and the Gore-Tex logo from Gore. This isn’t cheap, which is why buying gear made with the fabric tends to be quite expensive.

This disadvantage is actually shared by most waterproof-breathable fabrics, not just Gore-Tex. But anyone buying Gore-Tex gear should recognize that you have to take steps to maintain it in good working condition. That includes keeping it relatively clean and reapplying a DWR (durable water repellent) as needed.

There are also some people who aren’t huge fans of Gore-Tex for environmental reasons as the production of any synthetic fabric usually requires a substantial amount of chemicals, water, and fossil fuels. However, to the company’s credit, this problem isn’t unique to Gore-Tex, and Gore is trying to take steps to be more sustainable.

Is Gore-Tex Worth It in Boots?

Gore-Tex is a popular and time-tested fabric that’s found in some of the world’s best hiking boots. The performance of the fabric itself is backed by a lot of scientific research, testing, and development, and there are plenty of people who wouldn’t go outside without Gore-Tex boots on their feet.

Of course, there are downsides to Gore-Tex, including its cost and high maintenance requirements, so it’s not right for everyone. Gore-Tex also has its limitations, like every other piece of gear. But if you’re interested in waterproof boots and are okay with paying a bit extra for your equipment, Gore-Tex is worth considering.

Up Next In Hiking Boots:

How to Get the Smell Out of Hiking Boots

Can I Wear Hiking Boots in Snow?

Are Timberland Boots Good for Hiking?