Have you ever been on a hike, heard someone refer to a “cairn” on the trail, and been a little confused as to what they meant? You’re not alone. The world of hiking is full of confusing jargon, and the term ‘rock cairn’ is just one more piece of terminology that every budding adventurer ought to know.

So, what is a rock cairn, you might ask?

A rock cairn is a pile, mound, or stack of rocks. Nowadays, you’ll typically see them on hiking trails, where they’re used to mark the correct trekking route. Humans have used cairns for years for a number of purposes, including as navigational aids and ceremonial reasons.

Interestingly enough, these seemingly innocent rock cairns are among the most controversial structures that you’ll find on hiking trails. That’s because, while some cairns are officially maintained by park rangers and land managers, others are informally crafted by hikers and could accidentally lead other trekkers astray.

In this article, we’ll do a deep dive into everything you need to know about rock cairns so you can be a more knowledgeable hiker on the trail.

Definition of a Rock Cairn

A rock cairn is a pile or stack of rocks. They’re most commonly found along the sides of hiking trails, but you’ll sometimes see them at rocky beaches or at historic sites.

In a hiking context, rock cairns serve an important purpose: they help mark the path so that you can stay on the trail, even if the conditions worsen and it’s difficult to see the route ahead. They’re particularly common in areas without many trees as they serve as a good substitute for trail blazes, which are commonly carved or painted onto tree bark.

On well-maintained trails, such as those in national parks, large rock cairns are often maintained by park rangers. These cairns tend to be very large because they’re designed to be highly visible from far away.

But, not all cairns are authorized by land managers, and many are built by hikers and other passersby for fun. In these situations, relying on a rock cairn can actually lead you away from the correct path. As a result, you never want to rely solely on cairns for route finding. Always bring a map, compass, and GPS device that you know how to use as backup navigation aids.

We should also point out that not all rock cairns are built for navigational purposes. Humans have been building cairns for thousands of years. Most of the time, these cairns were built for ceremonial reasons, such as to mark a burial ground.

Even today you’ll find cairns that are built for non-hiking purposes, such as to mark a border between two towns. Cairns were pretty popular among land surveyors in recent centuries, too. So if you find a cairn that’s randomly placed in a field or on the side of a road, it may have been built by land surveyors.

Why Are Stacked Rocks Called Karens?

Stacked rocks actually aren’t called Karens — they’re called cairns. The use of the term ‘Karen’ to refer to a pile of stacked rocks is an eggcorn, or an incorrect phrase that’s created by people mishearing and mispronouncing a term, in this case ‘cairn.’

The real name for a pile of stacked rocks is a ‘cairn’ which comes from the Scottish Gaelic word càrn. The plural form of the word càrn is càirn, and that’s the ultimate source of the English word that we use today.

It’s not entirely clear why speakers of Scottish Gaelic decided to call piles of rocks càirn. But the word càrn appears in many Scottish mountain names (e.g., Cairn Gorm, Cairn Toul, and Càrn Mòr Dearg). In modern Scottish Gaelic, càrn can be translated as ‘heap of stones’ or ‘to pile up and accumulate,’ which would explain both the meaning behind these place names and our English word ‘cairn.’ 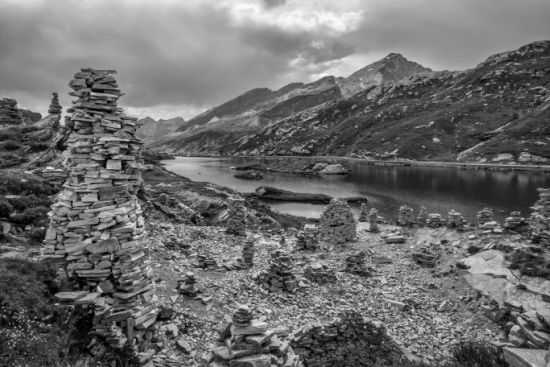 Why Should You Not Stack Rocks?

Although cairns can be a very useful navigation aid in the mountains, they are also highly controversial.

Officially authorized cairns, such as the large rock piles found in some national parks, are great tools for hikers and most people don’t argue over whether or not they should exist. The issue with cairns, therefore, comes when we talk about “unofficial” cairns that hikers make for fun during their travels.

Many land managers and hiking organizations tell people not to stack rocks for one of a handful of reasons, including:

Therefore, while it can be fun to stack rocks, it’s generally best not to while you’re on the trail. It’s also a good idea to avoid adding rocks to any professionally made cairns. While large official cairns may look very sturdy, they can collapse if you tamper with them by adding or removing stones.

In other words, if you come across an official cairn on the trail, admire it from afar—your fellow hikers will thank you later!

Cairns: To Build or Not To Build

Cairns are amazing navigation tools when used properly. If a cairn is built and maintained by land managers, you can typically rely on them to lead you down the correct path (but always have a physical map or digital app like CalTopo, compass, and GPS available, too). However, issues arise when hikers build their own unofficial cairns for fun as these can confuse others on the trail.

At the end of the day, being a responsible hiker means admiring and appreciating cairns without tampering with them. Out of respect for the environment and other hikers, it’s also best to avoid stacking rocks in the mountains. That way, we can all minimize our impact on the trails that we love so we can continue to enjoy them for generations to come.

What should you NOT wear while hiking? (10 Common Clothing Mistakes)

Are Xero Shoes Good for Backpacking?