If you are a novice RVer, there are many things you should start learning, including the basic systems that help your RV run, what they are and how they work. One of those important systems is LP gas that is used to run many different items in your RV.

So, what exactly is LP Gas in an RV?

The LP gas in an RV is propane, stored in a liquefied form in special purpose tanks. It is the fuel for appliances in your RV such as the refrigerator, propane stove and water heater. When there are no electrical hook ups available, these appliances are built to run off LP gas.

So, let’s get into the details and some other things you should know about LPG in an RV.

Definition of LP Gas in an RV

LP gas, LPG, liquid petroleum gas, or propane gas; is the fuel for various appliances in an RV. It is called LP gas because it is produced by distilling petroleum, or crude oil, and then compressed until it turns into a liquid.

In this form, quite a lot of it can be stored in a tank, compared to the gaseous form.

It is one of the most economical sources of thermal energy, and because of the very high temperature of burning, it is also very clean. This second reason is why it is very often used for cooking.

There are two types of tanks for LP gas that you can find on RVs:

DOT tanks are the type that is regulated and standardized by the Department of Transportation, hence the DOT in the name. They are actually the same type of tanks you might be using for your outdoor gas range or propane barbecue. 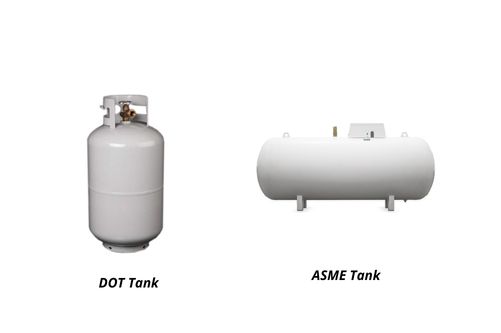 ASME tanks are type standardized by the American Society of Mechanical Engineers. These tanks are almost always permanently installed in a vehicle, such as motorhomes, and have a different shape than DOT cylinders.

It is very important that you know that there are two types of tanks because depending on which one you have the exact layout of the gas system is different. But most importantly, the fittings and some other parts of the system are not interchangeable.

How a LP Gas System Functions

It is not uncommon for people to not understand how gas systems function, and wonder how comes that liquid gas doesn’t gush from their ranges. While propane in your RV is stored in a liquid form, it doesn’t reach “consumers”, appliances that use it, in liquid form.

The gas does flow as a high-pressure liquid from tanks. But then it reaches the regulator, a device inside of which it can expand and turn into gas. From there it flows as a low-pressure gas through the gas lines and where it is needed.

LP Gas System on a Motorhome

On motorhomes, the most common are ASME tanks, and they are much bigger than DOT cylinders. The gas system is made of a tank, regulator, and gas hoses that supply appliances.

Optionally, between tank and regulator, you can find a T-fitting, for connecting an outside grill or range.

Because that T-fitting is before the regulator, such an outside appliance must have its own regulator.

On travel and 5th wheel trailers, you will almost always find a DOT tank-supplied gas system. These systems have a very similar layout to motorhome systems.

Some larger RV trailers can have two propane tanks, and they are always the DOT type. These layouts instead of one have two pigtail hoses connecting both tanks to a single regulator.

This way the LPG from both tanks is consumed at the same rate. And also used for supplying all appliances on the same line.

While you might presume that propane ranges are powered by LP gas in RVs, they are not the only ones. Besides them there are also:

Furnaces in RVs are used for heating, and they are the simplest type there is the forced air system. They are consisting of an enclosed gas burner with air ducts around it.

A fan is drawing the cold air from the surroundings, and pushes it over the heat exchange and thus heating it. Then this air exits through the wents and heats the interior of your RV.

The RV can have ranges with most often two burners. But, models with 3 burners are not very rare. Also, larger motorhomes and 5th wheel trailers can come equipped even with residential units.

Gas water heaters function similarly to the units you can find in many homes. A gas burner is enclosed under the water holding tank, but these are much smaller units, so they often do not have a heat exchanger surrounded by water.

While it is counter intuitive, heat from burning propane can be used for cooling a fridge. These fridges use a mixture of water, ammonia, and hydrogen, and the first step in the cooling process is to heat this mixture so that ammonia boils and separates from water.

As a gas, it enters the condenser where it turns into liquid.

As a liquid, it combines with hydrogen in the cooling elements of the fridge. As it soaks up the heat from the interior, it turns into gas as it warms up. Then it goes to the absorber where it turns again into liquid, and the process starts again.

This type of refrigeration is much more economical than electricity.

When it comes to RVs, there are many things that first-time owners should learn. Things about various systems in their recreational vehicles, and how they work. One such thing is what is LP gas in an RV?

LP gas in RV is propane, and it is the same gas that you can find in the propane cylinders you probably use for a gas barbecue. This gas is used for heating, cooking, and heating water, but also for powering refrigerators.