Professional rock climber Alex Honnold is one of the main reasons that I have lived on the road in a converted school bus for over a year. After he free soloed El Capitan in June of 2017, my boyfriend Aaron and I got sucked into a YouTube wormhole of Alex climbing various insanely difficult routes, and eventually a video tour of his van conversion popped up.

Enthralled, we watched as he pointed out features inside the van that allowed him to live in the vehicle, which in turn allowed him to spend the majority of his time rock climbing.“That’s so small,” we said. “We could never live in something so tiny. He can’t even stand up in there.” But then, the next video on autoplay was a tour of someone’s 40-foot school bus that they had converted into a beautiful mobile tiny home.

We Made The Decision To Purchase A Bus Or Van

For a few days, we pondered the feasibility of upending our lives by purchasing a bus or a van and traveling the country. We watched countless videos, made budget calculations, and researched things like reclassifying vehicles as RVs and how to get such a vehicle insured.

We had both been out of college for a few years at this point, both owned cars, had full-time jobs, lived in an expensive but cute cottage in a millennial-dominated neighborhood of Seattle, and had plenty of friends with whom we regularly partied.

However, this wasn’t what we had imagined for ourselves for the next 40 years. Working 40 hours a week to pay for a house that we never got to enjoy because we were always at work and cars that we only ever drove to work wasn’t our idea of success or fulfillment.

The timing couldn’t have been more opportune – we didn’t have student loans, a mortgage, kids, or careers that we were devoted to. We decided to go for it.

The Search For A School Bus Is On – Budget $5k

The most important parameters for us while searching for a vehicle were budget and size. We decided that with our current financial situation, we didn’t want to spend more than $5,000 on the vehicle itself, so that we would still have money left over to do the actual conversion.

And, after making a list of must-haves in the bus (a bathroom, permanent queen-size bed, a couch, etc.), we came to the conclusion that a short bus would be the perfect vehicle for us.

They are easier to drive and obviously more maneuverable than 40-footers, while still being tall enough that we could stand up inside, and large enough to accomodate all our desired elements.

We began our search by scouring the internet, trawling through sites like Craigslist and government auction sites like Public Surplus. We bid on a few buses on auction sites, but of course we were bidding on the newest, most desirable buses, so they got bid up well out of our budget. We found one bus that looked perfect and hadn’t been bid sky high, but it was in Arizona.

After debating the feasibility of buying the bus sight unseen and taking time off work to drive it back to Washington, we decided that was too much of a reach and decided to keep looking.

Then we found a promising bus on Craigslist that was at a dealership on Aurora (quite possibly the seediest street in Seattle). This was the first bus we took for a test drive, and we tried to overlook the black smoke billowing from the tailpipe as the slick sales guy assured us that this was totally normal for diesel engines.

The bus clunked decrepitly as it shifted gears, and after telling the seller that we would think about it, we returned home dejected as we admitted to ourselves that this wouldn’t be our future bus home.

Finally Found THE ONE

Aaron worked Tuesdays through Fridays, so he spent several Mondays driving up and down the west coast of Washington checking out and test driving buses. One Monday in August, he headed up north to the Bellingham area to check out two buses, and one of them ended up being The One.

He sent me a video tour of the bus and detected no glaring issues when he test drove this particular bus, and the Craigslist seller seemed trustworthy.

We conferred that night and agreed that this was by far the best candidate we had seen yet, so we emailed the seller with an offer of $5,000 to counter his listing for $6,000. After some haggling, we settled on $5,250 and told the man that we would be back the following evening to make the purchase.

Withdrawing Obscene Amounts of Cash To Make the Purchase

The next day on our lunch breaks, Aaron and I went to our respective banks to withdraw obscene (to us) amounts of cash. The rest of the workday passed in a haze, and I raced home at 7 pm to pick up Aaron so we could begin the two-hour drive up to Bellingham.

As we pulled up to the seller’s house, a spritely 50-something man emerged wearing khaki shorts and an unbuttoned Hawaiian shirt flapping over his bare leathery chest.

After some good-natured grousing about the late hour and our haggling over the price, he showed us the bus, pointing out that he had already removed the necessary school features (flashing lights, stop sign, front gate, etc.) to allow us to drive the bus legally. He caressed the hood tenderly and warned us to baby the engine and take it slow up hills. 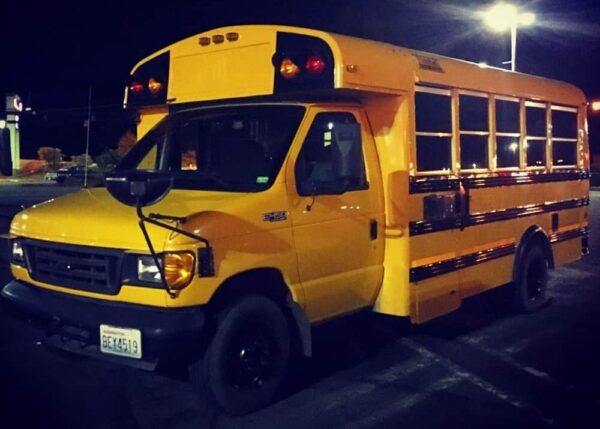 Even though it was the middle of the night we had to stop to take photos.

Evidently the seller had purchased this bus from the Mount Baker school district, planning to do exactly what we were going to do, but then decided he needed a bigger bus to house his outdoor toys.

Despite knowing next to nothing about engines (particularly diesel ones), I was comforted by the fact that this guy, who had a garage that was bigger than his house and full of various vehicles, had deemed this bus a suitable candidate for conversion.

After I agreed with Aaron that this was the bus for us, we headed inside to take care of the sale paperwork. The seller whipped out a counterfeit banknote detection pen as we handed over the massive pile of cash.

His efficiency and care with the sale reassured me somewhat about the fact that we were purchasing a vehicle/our future home from someone we didn’t know at all, and that he could easily be swindling us and/or misleading us about the quality of the bus. We signed the necessary sale papers, taking pictures of all the documents as an extra level of security. The seller handed over the keys and wished us luck.

“Oh my god,” I hissed to Aaron as we walked out to the yard. “We just BOUGHT A SCHOOL BUS!”

We took a few pictures and furiously texted our families and friends, before Aaron took the wheel of the bus and fired it up. The diesel engine rumbled to life and growled sexily as it idled. I hollered to Aaron to call me if anything weird happened and raced back to my Subaru so we could start the long drive to Aaron’s parents’ home south of Seattle, where we would be storing and converting the bus.

As I watched the bus ahead of me on the drive, I vacillated between uncontrollable excitement and the “oh shit” feeling you get before the roller coaster drops over the precipice. There was no turning back now.

The bus whizzed along I-5 with surprising speed, easily maintaining a brisk 65 mph. We stopped in a Safeway parking lot so I could take a turn driving the bus. It has a Ford E-450 van front, so sitting in the driver’s seat felt like any other car, until I looked in the comically oversized side mirrors and saw the giant metal box behind me.

I gingerly pressed the gas pedal and the engine growled disproportionately to the 5-mph crawl I achieved. Gaining confidence, I eased over some speed bumps and made a few turns.

By this time, it was after midnight, so after my brief drive around the parking lot, we dropped off the bus at Aaron’s parents’ and drove the 30 minutes back to our house in Seattle. We discussed names for the bus on that drive home and settled on Stu. When we arrived home, we took celebratory shots of Fireball and our @stu.the.bus Instagram page was born. 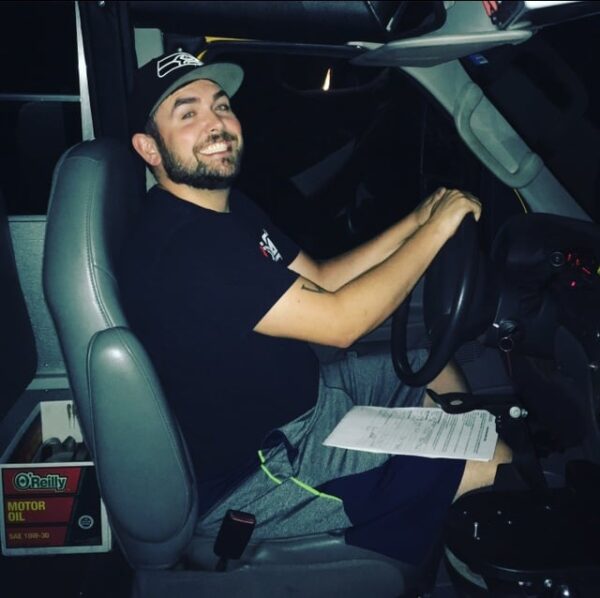 Aaron takes the wheel of the bus immediately after we signed the papers!

Finalizing The Paperwork And Miscellaneous Fees

Thanks to my inordinately long 90-minute lunch breaks, I was able to take our sale paperwork to the DMV the following day.

I paid the sales tax (taking the total cost to about $6,000) and explained to the agent that we would not be driving it for several months while we converted it to an RV, so she allowed me to pay the sales tax without registering the bus, and instructed me to come back when the bus was done to reclassify it as an RV and take care of the registration.

This turned out to be a ridiculously easy process in Washington, requiring no inspection or even pictures of the completed conversion – only an official weight slip which we obtained at a nearby gravel quarry. After we had completed the conversion but before the addition of the deck and solar panels and without all of our stuff inside, Stu weighed in at a hefty 10,000 pounds.

We changed the color on the paperwork to green since we had painted the bus, and reclassified it when we registered it. $20 for the weight slip and $200 for the registration and we were legally all set to hit the road!

How Much Does a Bus Conversion Cost?

How Much Does It Cost To Live and Travel in a Bus?

We love your bus! We are in the process of converting a short schoolie ourselves and we love the color of your bus! Would you mind telling me how you guys painted it and what color you choose? Thank you! Love the blog ☺️