As the technology becomes more lightweight and affordable than ever, an increasing number of vanlifers are opting to power their vans via solar. The amount of solar that you require depends on both your climate and energy use, varying greatly depending on your van set up.

For example, someone running just their lighting and water system off of the panels are going to need much less power than someone with a fridge, electric oven, or wide screen television.

Contrary to common belief, the solar panels are not the most important part of a solar power system. Much more important is the ability that you have to store the power which the panels create, so investing in decent batteries is an essential element of any solar power system.

Considering the massive variation between different people’s needs, the best way to work out your personal requirements is to do a power audit.

So, how much solar do you need for van life? Van life will require anything from a flexible 50 watt solar panel to charge a mobile phone on up to a very large, roof-fixed, 450 watts of solar panels to run an air conditioner, fridge and television. It all depends on your specific setup and needs.

Read on to find out more about my personal power set up, and hear from a wide range of different owners about how much solar they installed in their builds…

When converting a Peugeot Boxer transit van (featured image top of article) into our full time-home, my partner and I knew that we would need to be able to draw enough power year-round, even in the long rainy weeks of winter. With that mind we installed a 400-watt solar panel which takes up nearly the whole roof and fed it into two gel 110 amp batteries.

Unless it’s an emergency, you shouldn’t let gel batteries fall below 50% as this dramatically effects their efficiency. Lithium batteries are much more efficient and can be used to their full capacity, but they were well out of our price range.

In a flurry of creativity, Florian designed an iron structure which he cut and welded in his Mom’s workshop. This allows us to fully tilt out solar panel to a 90-degree angle, making sure we catch the full capacity of the sun’s rays throughout the day and helps us charge our batteries even in the darker months of the year.

We also installed a battery manager which keeps track of how much power is in the batteries and makes sure the system does not get overloaded on a hot summer day. Our set up provides us enough power to charge our devices, run our lighting system and simple water pump which draws the water from the tank up to the taps.

Our cooking system is powered by gas and our Propex heating and cooling system also runs off gas. Although, it does draw a small amount of electrical power in order to work.

We decided not to have an electric fridge or oven because they draw too much power and opted to watch the occasional film on our laptops instead of installing a television. Although a fridge would be useful, we only have 5 square meters of living space, so we decided the combination of space and energy it would take up could not be justified.

So far, it hasn’t caused us a problem though it does of course limit our ability to store fresh food. In winter we can leave vegetables for a couple of days in the cool cupboards and in summer we have to cook most fresh food the day that we buy it.

If this would be inconvenient to you, but you don’t want to put too much pressure on your power system, you can look into getting a fridge that’s run by gas, or a high quality cool-box that you can top up with ice every few days.

Sometimes I resent the fact that our whole roof is taken up by the solar panels, especially in the summer months when I would love nothing more than a kayak to paddle around the rivers in. However, we don’t have enough living space to store the solar panels inside, having already crammed the tiny van with snow boards, long boards and, more recently, a guitar.

What’s more, the solar panels give us the self-sufficiency to comfortably camp anywhere we like, without having to pay for a campsite hook up or drive long distances to maintain the charge of a traditional leisure battery.

Nate (@explorist.life) teaches people how to build their own campers via his YouTube channel. He has tons of useful advice to help you install a solar system in your DIY campervan. He emphasizes the importance of doing a power audit before deciding how much solar to invest in.

“You NEED to know how much power you use on a daily basis to determine the size of solar system you’ll need to power your camper.”

In a nutshell, it involves gathering together all the different appliances that you want to power, from your laptops to your fridge to your electric toothbrush, and entering how much power they draw into a spreadsheet he has created for you. Only by doing this, will you have the answer to how much solar you will really need.

“Sure, you can buy a random solar kit and go for it, but more often than not, that tends to lead to disappointment in the performance of the system.”

Nate created a detailed step-by-step guide to support you in doing your own power audit, which you can read here. 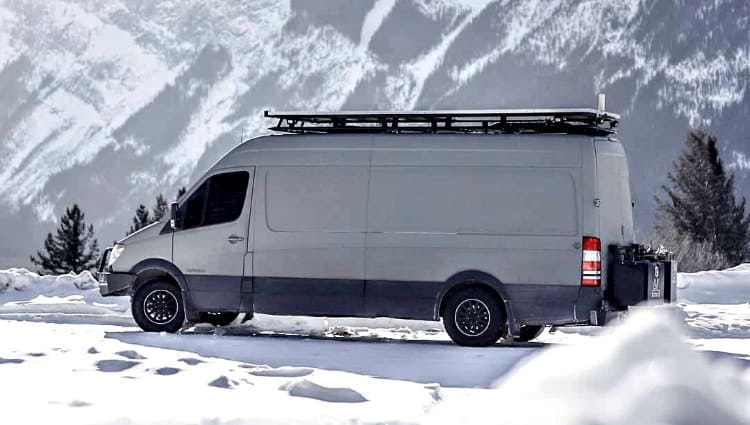 “It really is different for everybody. After figuring out your draw add 10% and multiply it by two because you will always forget at least one electrical item and you should not drain gel batteries beyond 50%. Determine your charging system by the size of your battery bank, not by the solar panels.”

Howie (@howiemayer) is travelling in a self-converted Promaster 2019 campervan. He has a solar panel of 400 watts which charges a single lithium battery and has been travelling in the sunny climates of Utah and Colorado. Working remotely, it’s really important that Howie can keep his appliances charged year-round, so if another battery is ever needed it can be added to the system at a later date.

“I decided on 400 watts because of the price and if I ever wanted to expand my battery system, I could still easily charge them. Also, the 400-watt panel doesn’t take up too much roof space so it doesn’t take up all the roof storage!” 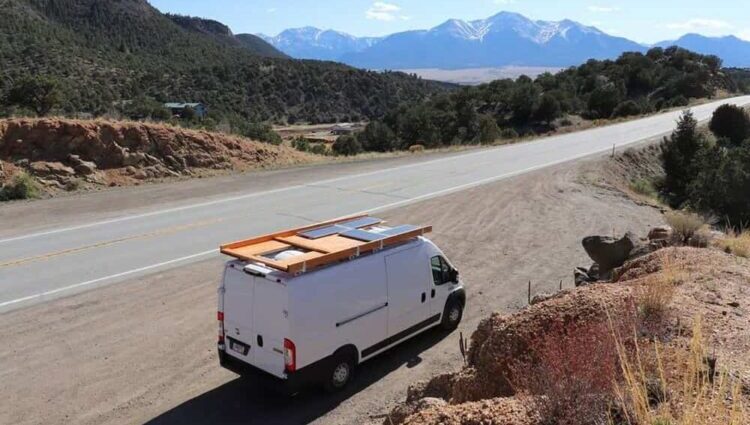 Pete (@whitevanfamily)  lives in his converted sprinter full time with his wife and children. They manage perfectly well with just a 50 watt solar power on the roof, and an additional 100 watt folding solar panel that they set up once they’ve made camp.

“Having a folding as well as a mounted panel means we can park in the shade on hot days and still have the panels in direct sunlight all day! It also works really well on the dashboard, so we can still set it up if we are somewhere less private without causing the locals any offence.” 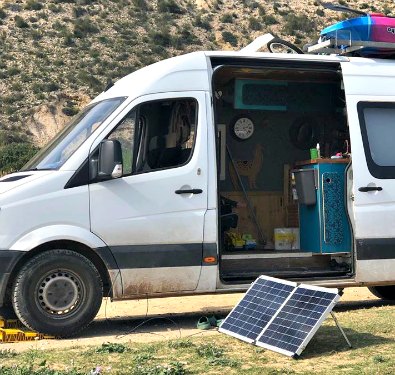 Stewart (@auggiesgreatadventure)  installed a 350 watt solar panel on the roof of his 2019 Mercedes Sprinter, and feels the size is perfect for his needs.

“We did a lot of research into what people with similar ideas were using as well as what size we could fit on the van. We were thinking 400 watt but then we found that 350 watt panels fit our van a lot better. We decided to install a battery to battery charger as a backup which is also reassuring.” 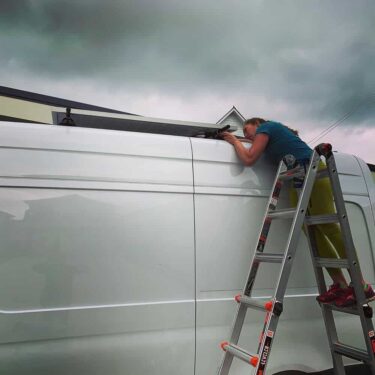 What do I Need for Vanlife? 25 Essentials for Life on the Road

Matt (@EnjoyTheJourney.Today)  is a digital nomad and video producer. He recently installed an additional 2 solar panels to his power set up and a brand new 200 amp hour lithium battery. (You know, those awesomely efficient batteries that I could only afford to dream of). His power set up allows him to produce and share Good Vibes from the road,  a live talk show he created specifically for the Vanlife community.

“Like many vanlifers, I have struggled with power using lead acid batteries that don’t last more than 2 years. This new upgrade should last me 10 years+!” 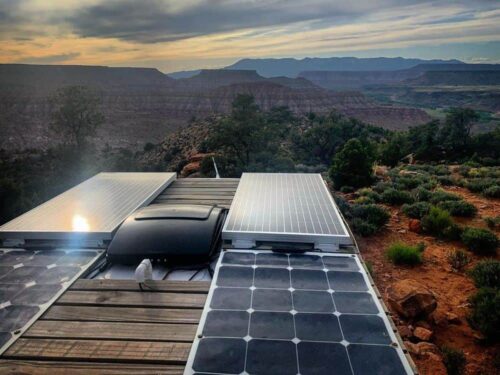 “We travelled over 55k miles in that time, so we were never in the same location for very long. We had no issues in the Pacific North West or Alaska, despite all the rain and gloom we encountered.”

They found that a 300 watt solar panel and 100 amp hour gel battery met all of their needs whilst living in the van and never had any issues with the power use whilst running a fridge full time, a fan, lighting, propane monitor and charging mobile phones. They write about their adventures at The Vanimals Blog. 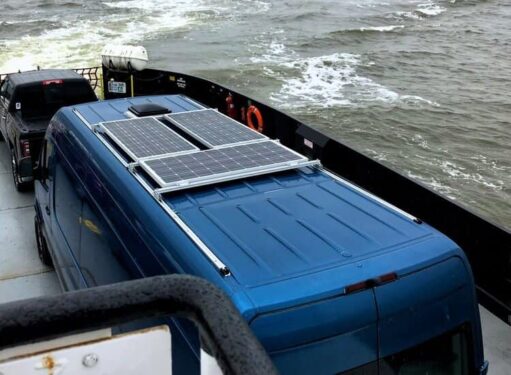 Ceri and Will (@tothemountainsnback) have been travelling in their self-converted Sprinter van since last year. Working remotely, they decided to invest in a 500 watt panel to provide a completely reliable power source.

They also have a smart home system that allows them to control lighting, ventilation, music, device power and a projector from their phones or by using their voice activated our echo dot. They didn’t want to have any gas in the van, so use solar power for all of their cooking needs as well.

“As we travel in the winter as well solar power alone is not always enough for our energy consumption so we also charge our battery as we drive.”

You can read up about their adventures and learn more about earning a remote income at their successful blog. 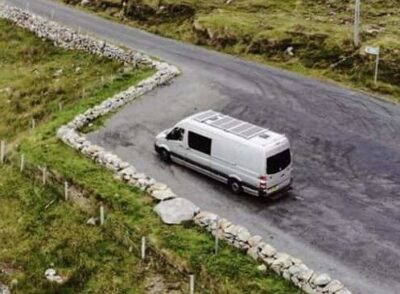 Amy (@amymetall)  on the other hand, has chosen to keep things more simple.

“I have just 150w panel and one 110ah battery, even on the cheap eco-worthy solar controllers. I do fine all summer, winter just means I cant charge my laptop and maybe ration the lights and go for candles (real Hygge!) I do have a small and simple set up though, I think it just depends on your personal electronics use.” 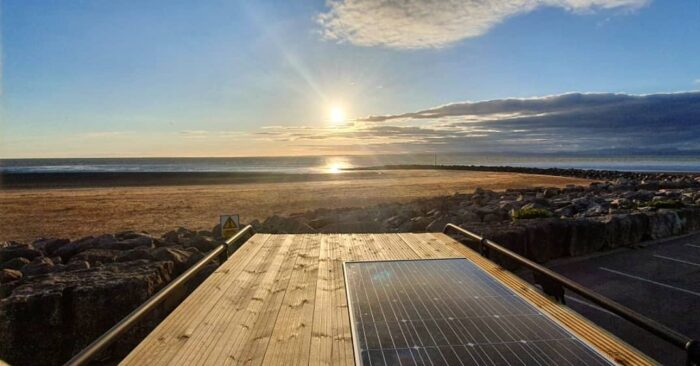 The best way to work out how much power you will need is to do a power audit. This does take some prior time and planning but is the only way to be sure that you can provide enough power to meet all of your needs.

Remember, it is more important to ensure that you have a decent battery system to store power than try to get the biggest solar panels in the world. Don’t forget that solar panels are just one small part of the whole power system, and that gel batteries are kept in best condition by never dropping below more than 50% of their power store. If you can afford a lithium battery, it is worth it in the long run!

Which Sprinter Van is Best for Conversion?

Saving for Vanlife (How Much You’ll Need)

How do you Insulate a Van Conversion? (7 Best Materials + Our Experience)

What is the Best Small Campervan?