Knowing what various standard devices in your RV do, allows you to understand the capabilities of your recreational vehicle. One such thing is knowing what an inverter does on an RV.

So, what exactly does an inverter do on an RV?

The inverter draws DC current (12 volt) from the house batteries. It then transforms the DC current into alternating current (120 volt) power which is needed for powering the air conditioning and other large appliances that require this type of current.

But, there are more things you should know about these devices. How do they do it, what are the different ratings and their meanings, and much more? Let’s get to it.

How an Inverter Works on an RV

In the simplest terms, it takes the direct current produced by the batteries and converts it into alternating current that can be used by various devices. It steps up the 12V power to 120V that these devices use. They are first and foremost the AC devices, AC as in air conditioner. But also refrigerators and many other appliances fall into this category.

Your RV can have batteries in which electricity is stored, but all batteries are direct current, so some device needs to convert it so that it can be used when you are dry camping. In other words, when you don’t have available the shore power or home outlet. Besides an inverter, an RV will also have a converter, a device that serves the opposite function of converting alternating into direct current and thus charging house batteries.

The Physics of an RV Inverter

It works by obeying the laws of physics. The easiest way to understand how an inverter works is to think about the electrical power as an electrical signal. So, the inverter does two things, steps up the voltage, from 12V to 120V, and changes the type of current from direct to alternating current.

Stepping up the voltage works on the principle of transformers, where such one device can change either amps or volt values anyway as long as their product remains the same.

So, the inverter’s transformer will draw 10A at 12V from the battery to produce 1A at 120V. It’s like connecting a wider hose to a narrower one. The velocity of the water will drop down (amps), but the flow rate will remain the same (amps time voltage). If you think of DC power as a flat line signal and AC as the sine wave signal, the only limit is that the value of the second signal has to be equal to the first one.

As the alternate current signal goes up and down between -120V and +120V, these peaks and valleys cancel each other. But, it will always have one extra valley.

As we said above, inverters take the flat-looking direct current signal and create an alternating signal of peaks and valleys. 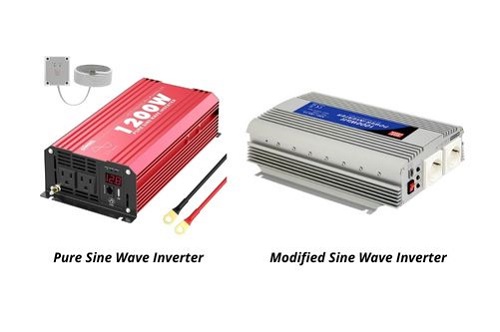 And everything works because that new signal has an odd number of peaks and valleys, with the last one making these two signals mathematically equal. But the exact shape of these peaks and valleys splits inverters into two types:

In pure sine wave inverters, this signal is smooth, and it has the same shape as the signal from your home outlets. These are the best inverters, most stable, and most efficient. But, it is not easy to make the signal be this way, so they are also the more expensive ones.

In the second type (modified sine wave), the signal is made of a series of discrete values, it looks like steps looked from the side. This is much easier to accomplish, and the electrical components needed for this are more affordable, which makes the inverters of this type more affordable too. And also less efficient, as there are higher power losses.

There are three inverter power  ratings that you should be aware of when buying a new or replacement inverter:

Continuous rating is the power level that an inverter can output, well, continuously. Range of several hours and more. No matter how long the inverter is working, it will be able to provide up to this wattage as much is needed, without any drops.

The limited time power rating is the amount of power an inverter can provide over relatively short periods of time, around 20-30 minutes. These are situations when there is some heavy and unexpected load. It’s a type of safety margin.

Surge rating is the maximum power an inverter can provide for a few seconds, such as in situations when all ACs attached to it are started.

Note: Inverters are usually advertised by their continuous power, but some smaller manufacturers try to attract buyers by showing these other two ratings, which are higher. So caution is advised.

What are house batteries in an RV?

What size generator do I need for my RV?

Should the RV inverter be left on?

No, the inverter should not be left on when it is not in use. One thing to keep in mind is that there are certain inefficiencies in all inverters.

To produce 120V at 1A, the inverter will draw slightly more than 10A from the battery, and when it is not under load, it will actually draw that extra trickle current. If left on for too long, it will drain the battery and you could end up with no power when you need it. Because of this, it makes more sense to turn off the inverter when it is not needed.

From where does the inverter draw power?

Recreational vehicles have the so-called house batteries, they are the deep cycle type that provides all the electricity to the RV when the campground power connection is not available. You should know that trailers have only these batteries, but motorhomes also have chassis or starter batteries, which are regular car batteries. These two have different roles in a motorhome.

The chassis battery is used only for starting the motorhome’s engine, while powering appliances, the house battery will be utilized.

Not understanding what some device does on your RV can lead you to not being aware of its presence. This is why you should know what an inverter is on an RV. It is a device that converts the 12V direct current from RV’s house batteries into 120V alternating current, which can be used for powering air conditioners and other devices in an RV that need it.

What is the Best Class-B RV for the Money?