These days, there are so many different kinds of trail running shoes out there that it can be difficult to figure out which one is right for you. Add in all of the new technology that’s on the market today and the search for a new pair of kicks can seem impossible before you even get started.

One of the most common questions people have when buying trail running shoes, in particular, however, concerns the topic of “drop.” Coming up, we’ll walk you through the basics of “shoe drop,” explain what it is, and how it affects your running. Plus, we’ll give you some information on the difference between high, low, and zero drop shoes so you can go out into the world of running with a bit more knowledge.

So, what does drop mean in shoes? Simply put, “shoe drop” is a measure of the difference in height between the heel of a shoe and the toe of the shoe. Also known as “heel-to-toe drop,” HTT, or a shoe’s offset, shoe drop is expressed in millimeters and is a feature of nearly every piece of footwear – with a few notable exceptions.

If that sounds a bit confusing, we understand. To help you better grasp the concept of “shoe drop,” we’ve put together a guide on everything you need to know about shoe drop when shopping for new trail runners.

Here are our answers to all of your top questions about shoe drop:

How do you measure shoe drop?

As we’ve mentioned, shoe drop is expressed in millimeters. How do you measure shoe drop? Well, basically, all you need to do is measure the difference between the height of the heel of a shoe and the height at the front of the foot. Generally speaking, this is something that a shoe company will do for you and advertise on their website, so you don’t need to go shoe shopping with a ruler in hand.

How has shoe drop changed over time?

Traditionally, running shoes didn’t actually have any heel-to-toe drop. In fact, about 50 years ago, all running shoes were perfectly flat. However, during the running and jogging boom of the 1970s, shoe companies started altering their designs to better cater to the needs of a more diverse customer base.

As more people got into running, especially people who are naturally less athletic, or at least less accustomed to running, shoe companies wanted to make their products more comfortable. The answer? Additional cushioning underfoot.

Plus, shoe companies started adding even more cushioning under the heel, which helps reduce strain on both the calf muscle and the Achilles tendon. From that point forward, running shoes had a standard heel drop of about 10 to 12 millimeters.

Since the introduction of shoe drop, however, things have changed. With the release and popularity of the book Born to Run about a decade ago, the barefoot running and minimalist shoe movement got its start.

Advocates of the barefoot and minimalist trends claim that returning to no or low drop shoes can help people run with a more natural stride, which encourages better foot and ankle motion as well as a more even distribution of the impact forces of running.

While the minimalist running movement is not nearly as popular as it was before, shoe companies have more or less turned the 8 to 10 millimeter drop into the industry standard as it seems to work best for a broader range of customers and runners. 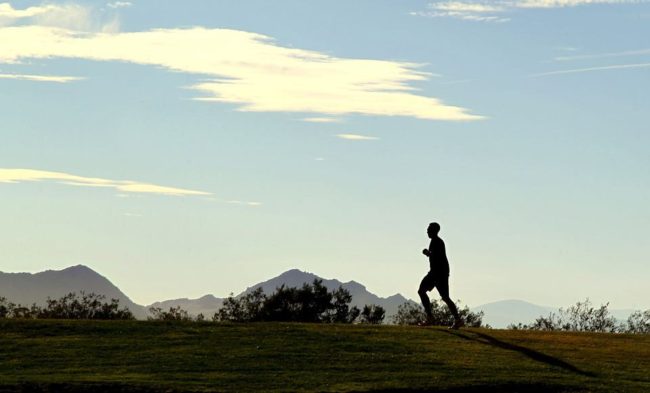 How does shoe drop affect a runner?

If you’re wondering why anyone ever really bothered with shoe drop to begin with, it turns out that it all happened to make running more comfortable for the average person. The idea is that shoe drop adds more cushion in the heel and reduces stress on one’s calves.

However, there is really no scientific evidence to back up this claim. Indeed, a 2016 study published in the American Journal of Sports Medicine demonstrated that there was no significant change in injury rates based solely on the heel drop of one’s shoes.

But, many physical therapists, physicians, and running experts suggest that people with particularly tight calves and people with really forceful heel strikes in their stride could benefit from the extra padding in a 10 to 12 millimeter drop shoe. Others who have had Achilles tendon issues may also benefit from the reduced stress that a high drop shoe can provide.

Generally speaking, these experts agree that a higher drop shoe relieves stress on the lower parts of the leg (think: foot, ankle, Achilles, and calf) while a lower drop shoe is easier on the knees and hips. So, its really all about what’s best for your needs. If you’re not sure what’s best for you, consult a running coach or physical therapist for advice.

What is considered a HIGH heel to toe drop?

Running shoes with a “high” heel to toe drop usually have a drop in the 10-12 millimeter range. As we’ve mentioned, these are often recommended for people who tend to heel strike or for people who generally suffer from lower leg pain and injuries due to running.

It turns out that high heel to toe drop shoes are becoming less and less common, thanks to Born to Run, a lack of real scientific evidence supporting their use, and changes in consumer taste. But, if you like high drop trail running shoes, they certainly do exist.

One of the more popular high drop trail runners out there is the Salomon Speedcross. The new Speedcross 5 features a 10mm drop, which, while not extreme, is pretty sizeable. The Asics Gel-Venture is another common trail runner that hits the 10 millimeter drop mark.

These days, you’re more likely to see a trail runner with a 6-8 millimeter drop. While these aren’t technically “high” drop shoes, they’re sort of a middle ground in between high and low drop shoes, so they tend to be quite popular for people who favor versatility in their shoes.

What is considered a LOW drop shoe?

A low drop shoe has a heel to toe drop of about 2-4 millimeters. These shoes have become popular among people who don’t want all that stress on their knees and who tend to be more mid-foot strikers, but also aren’t keen on a zero drop shoe. Low drop shoes offer many of the benefits of a zero drop shoe with some extra padding, so they’re a good compromise.

It’s really hard to say that any one kind of heel drop is “better” than the other. In reality, it’s all down to personal preference and what you like to wear when you run. As studies have shown, there’s really not much of a significant difference in injury rates between low and high drop shoes, but if you tend to have lots of knee and hip pain, low drop shoes might help.

Our advice? Choose what feels best to you or consult a professional for specialized help.

What is a ZERO drop shoe?

As the name suggests, a zero drop shoe is a running shoe that has, well, zero drop. This means that there’s absolutely no difference between the height of the heel and the height of the forefoot. This kind of shoe became popular after the Born to Run book release and has spurred a whole generation of “minimalist” runners.

Should I switch to zero drop shoes?

It’s difficult to make any blanket statements recommending zero drop shoes to everyone. While they are certainly great for some people, they can cause lots of unnecessary pain for others.

As we’ve mentioned, low drop shoes are easier on the hips and knees but put more stress on your lower leg. So, if you’re someone with chronic Achilles, calf, or ankle issues, a zero drop shoe can be a negative influence on your running and even cause injury.

If you’re considering switching to zero drop shoes, it might be worth a try. Just remember to start slowly and don’t just buy a pair of minimalist shoes before heading out on a 50 mile trail run. Experts suggest changing shoes slowly, decreasing or increasing by a 2 millimeter drop with each successive pair of shoes until you find what feels best to you.

Ultimately, the best trail running shoe for you is the one that fits and feels the best when you’re cruising down hill or charging up a steep grade. It’s impossible to say that there’s one best shoe out there for everyone as each individual’s body and needs are different. So, if you’re looking to try out a new kind of trail running shoes, just remember to start slowly and enjoy the run!

Up Next In Running Shoes:

What Is A Rock Plate In Trail Running Shoes?