The hiking world is full of lingo and jargon that can be confusing to even the most seasoned of trekkers. Take the term “NoBo thru hiker” for example. What does that even mean?

The terms NoBo and SoBo are used pretty regularly in the thru-hiking world, but they’re not as obvious as they might seem to people who don’t normally complete long-distance treks. In this article, we’ll take a closer look at what these terms actually mean and how they’re used in the thru-hiking community.

A NoBo, or northbound, thru-hiker is anyone who chooses to hike a long-distance trail from south to north. These trekkers are walking toward the north, which is how they get their name.

The term NoBo is most commonly applied to someone on one of the triple crown long-distance trails in the US, like the Appalachian Trail (AT), Pacific Crest Trail (PCT), or Continental Divide Trail (CDT).

But it could technically be used for hikers on any long-distance trail that runs roughly north to south, like the Long Trail in Vermont or the famous Kungsleden in Sweden. It wouldn’t really make sense, however, to use the term NoBo for a hiker on an east-to-west trail like the Camino de Santiago in Spain.

In the US, NoBo thru-hiking is fairly common. This is mostly because NoBo hikers can start their trek earlier in the spring or summer than they would be able to if they were hiking southward due to the milder conditions that we see in the southern US during these times of the year.

For example, many NoBo hikers on the Appalachian Trail start their hike in either March or April, when the weather is fairly mild in Georgia and North Carolina (though there’s still technically a risk of snow in the mountains). Starting from the northern end of the AT at this time would be really challenging as most of Maine and New Hampshire are still covered in snow until at least mid-April.

What Is a SoBo Thru Hiker? 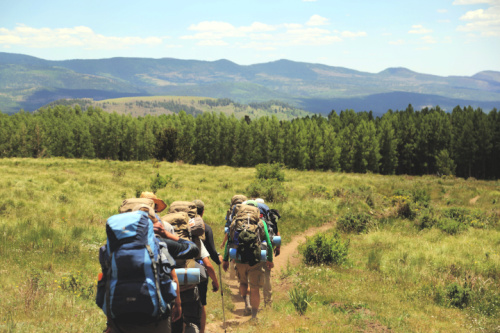 A SoBo, or southbound, thru-hiker is anyone that hikes a long-distance trail from north to south. As is the case with NoBo hikers, SoBo hikers get their name because they’re hiking toward the southern terminus of their chosen trail.

When compared to NoBo thru-hiking, SoBo trekking isn’t nearly as common, especially in the US. This is due to a number of reasons, but it mostly comes down to the weather.

Since most of the major long-distance trails in the US, like the AT, PCT, and CDT, have their northern terminuses near the Canadian border, the weather is usually pretty cold and snowy during the early spring. This poses a challenge and a hazard to SoBo hikers who would need to start their trek in the spring in order to get to the southern terminus of their trail by the end of the summer.

It’s also worth noting that many of the logistics systems in place to support thru-hikers on major long-distance trails aren’t really designed for SoBo attempts.

One very clear example of this is on the PCT because it’s actually illegal to enter the US from Canada while on the trail. As a result, SoBo thru-hikers need to start their hike from Harts Pass in Washington, hike the 30 mi (48 km) north to the actual terminus in British Columbia’s Manning Provincial Park, and then turn back south to “start” their hike. Talk about a headache!

Is it Better to Hike the Appalachian Trail North or South?

Both northbound and southbound hikes on the Appalachian Trail have their advantages. But the vast majority of people choose to hike the AT starting from the trail’s southern terminus in Georgia.

In fact, the Appalachian Trail Conservancy itself only recommends southbound hikes for people who already have a lot of experience hiking on the AT in Maine and New Hampshire during the snowy winter and spring months.

There are a number of key advantages to a northbound AT hike, including:

Also read: How Long Does it Take to Walk the Appalachian Trail?

Of course, a SoBo AT hike is likely to bring more solitude on the trail and it means less competition for good campsites and shelters. But very few people are ever successful with a SoBo hike on AT, so it’s not something that even the most experienced of hikers should jump into without careful consideration.

Only you can decide which way you want to hike on the AT, though the vast majority of thru-hikers on the trail opt to walk northbound.

NoBo vs SoBo Thru-Hiking: Which is Better?

There are advantages to both NoBo and SoBo hiking on long-distance trails. A NoBo hike usually brings nicer weather and easier logistics, but SoBo hiking often provides more on-trail solitude.

However, SoBo hiking on long-distance trails in the US is usually very challenging. As a result, it is only suitable for highly experienced thru-hikers who are comfortable with backpacking in inclement weather.

Up Next In Backpacking: