Planning a thru-hike can be part of the excitement of the trip. Researching trails and vistas or reading stories from hikers past. When you’re considering hiking the Appalachian Trail end to end, you may be wondering how long it will take you. There are a lot of factors involved in overall hiking time, and it will vary from hiker to hiker.

So, how long does it take to walk the Appalachian Trail? A complete thru-hike of the Appalachian Trail typically takes hikers anywhere from five to seven months. Speed records of the trail have been set in just over 41 days. Time will be determined on endurance, average hiking speed, and miles traveled each day.

The Appalachian Trail stretches 2,168 miles from the state of Georgia to Maine. Crossing state lines many times and hiking over numerous mountain tops, you can see why it takes most hikers months to complete this trail.

Many of the hikers you may encounter on the trail are just hiking sections; they’re not thru-hikers. There are an estimated 3 million visitors that hike parts of the AT each year, yet only about 20,000 thru-hikers have completed the trail since 1936.

The first few steps in a successful thru-hike experience are getting to know the trail and getting to know yourself as a hiker. Throughout this article, we will present you with some valuable tools as you begin your AT journey and layout some remarkable trail history along the way.

Average Miles Per Day to Complete the AT

One of the significant battles that a thru-hiker will encounter is knowing how far they can hike each day. This can be a vital aspect, as many hikers have set up drop points and only carry enough food to get them from one drop point to another.

When many hikers start, they will average around 8-10 miles per day. Then, as their strength and stamina build during their journey, they will begin to push 12-16 miles per day. Depending on the ability of the hiker, some will go up to 20-25 miles near the end of their trail days.

That’s kind of a lot of numbers to throw around, so to put that into perspective…

If you were to hike 10 miles per day for the entire length of the trail, it would take you about 217 days or approximately seven months.

That being said, it only takes most people 4 to 5 months to hike the trail. That means they’re averaging around 15 miles per day.

You’ll also want to keep in mind that different legs of the trail are more difficult than others. There are also sections with scarcity in water, so your pack may weigh more. All of these factors will impact the distance you can cover in a given day. Still, you can usually determine an estimate before you depart based on past hiking experiences and your physical condition.

Fastest Known Times to Complete the AT

Speed hiking on the trail has become somewhat of an ultramarathon runner phenomenon. There have been many speed records set and many attempts made, but to date, the fastest known time on the trail is 41 days 7 hours and 39 minutes.

Trail speed attempts can be broken down into two categories: supported and unsupported. That means some speedsters use a support team while others choose to be self-supported, much like that of a thru-hiker.

The top 4 fastest supported times on the trail are as follows:

The top 4 unsupported times on the trail are as follows:

What is the Hardest Part of the AT?

Many hikers, especially those not from the Eastern part of the United States, imagine the AT is a flat, easy trail. That is very far from the truth. Thru-hikers will gain and lose a total of 464,464 ft or 89 miles.

It isn’t the fact that the mountains are huge on the trail, but that there are no switchbacks. When you’re going over a mountain on the AT, you can expect to be taking a straight shot at it. That gives you miles and miles of steep, rocky terrain to climb up and wander down.

The most difficult parts of the trail tend to be in the northern portion. That is where the trails become much rockier and harder to navigate. The specific part of the trail that should be called the hardest is hard to pinpoint. All hikers will face their own hardest section of the trail, but we can narrow down some of the most challenging terrain portions that are commonly reported as being the hardest parts of the AT.

The White Mountains of New Hampshire:

This section will be just over 100 miles long. Mount Washington will be your highest point at 6,289 ft. Reportedly tricky due to elevation gain per each mile, intense weather, regulations for camping, rocky trails, and steep terrain.

The Bigelow Range and Southern Maine:

The total expanse of the Southern Maine section, including the Bigelow Range, will be just over 100 miles. The highest point will be North Crocker Mountain at 4,228 ft. This section is seen as one of the most difficult due to exceedingly eroded trail areas, imaginably difficult to travel terrain, and crossing the Mahoosuc Notch (AKA the slowest mile on the AT).

Some hikers will report that this mountain isn’t necessarily the hardest on the trail, but it is the most sustained climb. You will be ascending for about 5 miles. The highest point of the mountain is 5,268 ft. The terrain will be steep, rocky, sustained, and will involve some stream crossings.

Now, these three that we list are not the only difficult portions of the trail. There are many more challenging sections and sometimes even larger mountains to climb. However, these parts of the trail tend to be the most strenuous, rocky, repetitive, and steep. Not to mention depending on the time of year, water may be scarce on these legs.

No matter if you are traveling northbound or southbound, the passes you make over these mountains and these states will be days you remember. 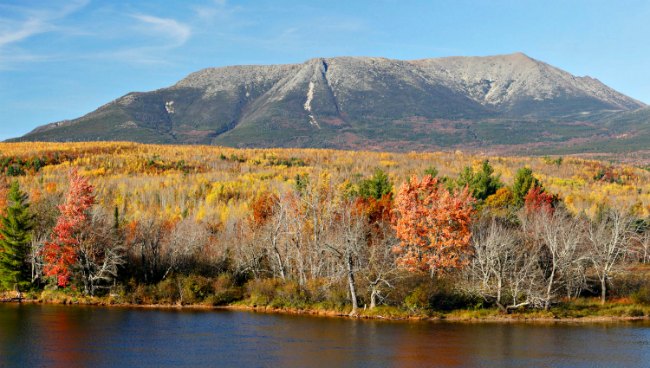 Where is the Halfway Point of the AT?

The Appalachian Trail Conservancy has reported that at least 99% of the original trail has been rebuilt or relocated since 1937. With the trail changing so often, that means the halfway point moves too. You will cross many halfway markers as you make your way through Pennsylvania.

Still, many hikers see Harper’s Ferry of West Virginia as their psychological halfway marker. Mileage wise, this will be past halfway, but as a hiker, it can be significant for one location to signify you’re halfway there.

Another common psychological halfway point for many hikers is Pine Grove Furnace in Pennsylvania.

As the location of halfway moves, those that upkeep the trail will relocate a marker as well. This can help hikers to have a physical reminder as they pass a sign telling them they are indeed halfway.

Hiking just the Virginia section of the AT

Since the entire Appalachian Trail is so long, many choose to complete it over the years by doing something called section hiking. This allows hikers to hike the entirety of the trail without having to do it in one push.

Most section hikers may not take on a full state at one time, but for others, it can be a rewarding getaway. As a thru-hiker, it can also be daunting to cross 14 states. So, estimating how long it takes to pass through some of the states can put your mind at ease and give you a frame of reference as you hike.

The Appalachian Trail will span 554 miles across the state of Virginia. That means that more of the AT passes through Virginia than any other state. It generally takes hikers at least a full month or more to cross the entire state. If you are averaging 15 miles per day, it will take you at least 36 days to complete just the Virginia section.

The speed at which it takes to cross Virginia will once again depend on your hiking speed and average mileage per day. Luckily, Virginia’s terrain is not going to be the most difficult on the AT. There will be portions that are harder than others, as well as some high elevation crossings.

When you’re choosing to start your thru-hiking journey, you will first want to determine if you plan to travel north or southbound on the trail. Since you will be spending almost half a year on the trail, the weather will change as you hike, this makes planning your start and estimated end time imperative to a successful journey. 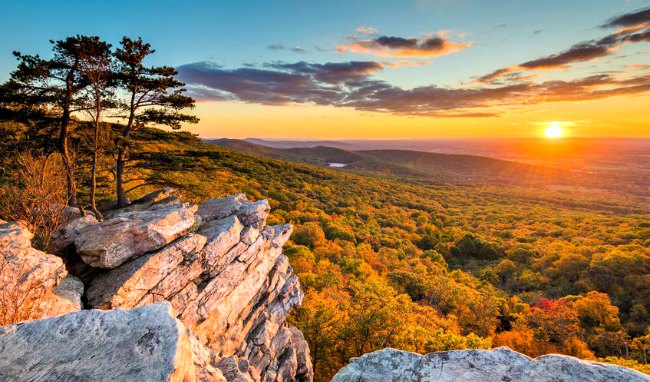 Annapolis Rocks, along the Appalachian Trail.

As a northbound hiker, it is usually best to start your hike in March or at the very latest, the first half of April. If you are a hiker of average speed, that will put you on pace to finish the trail in Maine by September.

Consider starting on a weekday, versus a weekend, as the trails will be less crowded. There are also a few dates to avoid as hundreds of hikers start their thru-hike on:

One these days upwards of 100 thru-hikers may start their journey. This can lead to overcrowding at campsites, trampled vegetation, sanitation issues, and degraded trail quality. Not to mention, you’re likely looking for a bit of solitude on your journey, and with 100 other hikers by your side, you won’t have that.

If you’re planning to tackle the AT heading South, you will need to be determined and in excellent physical condition. The northern parts of the trail are more complicated, and the weather is less forgiving.

Keep in mind that the window for starting a southbound thru-hike is much narrower than if you are heading north. The Katahdin trail does not open until the last week of May or early June.

It is recommended that you start the trail no earlier than June 1st if you are starting in Maine. The usual start time for the fairest conditions on the entire trail is anytime in June or as late as mid-July. This would put your end date somewhere in December. So, you’ll need to be prepared for possible winter conditions in the southern mountain ranges.

While fewer thru-hikers choose to start heading southbound, the northern parts of the trail are extremely popular section hiking and day hiking destinations. This will mean that your solitude on the trail will be limited.

Up Next in Thru-Hiking:

The 10 Longest Hiking Trails in the World

PCT Vs the AT – Which is harder?

Is the PCT Dangerous?