Dispersed camping is an umbrella term for camping in areas without designated facilities. It’s primarily used in US national forests, but you’ll hear other land management agencies use it, too. The idea is that dispersed camping involves spending the night outside at a camping site of your choosing where there are no designated amenities like toilets and fire pits.

If you like getting away from the crowds during your outdoor adventures, dispersed camping can be a great option, so long as you have the right gear for your outing. In this article, we’ll take a closer look at the wide world of dispersed camping so you can be more knowledgeable before your next trip outside.

Dispersed camping is a term that’s used to describe camping in areas away from developed campsites. It’s primarily used by the US Forest Service to refer to camping that’s permitted outside designated areas.

You may also hear it referred to as ‘wild camping’ or ‘primitive camping’ in some areas. However, as each land manager has their own definitions for these terms, it’s important that you verify what is and isn’t allowed in your chosen camping area before your next trip.

Note that some national forests and other areas of public land have areas where dispersed camping is not allowed. This includes in the vicinity of developed campgrounds and recreation areas and in other ecologically sensitive locations.

Dispersed camping also often isn’t allowed within about 100 to 200 feet (30 m to 61 ft) of a road, trail, or body of water. But you should contact the land manager in your adventure area to determine what the specific rules are for that region.

What is Stealth Camping?

Stealth camping is the act of camping in an area without others knowing that you’re actually camping.

It’s particularly popular in urban areas among people with camper vans that might otherwise just look like a van parked out on the street at night. But some people go stealth camping in non-urban areas, including on the side of remote mountain roads, so there’s no location requirement for an activity to be classified as “stealth camping.” 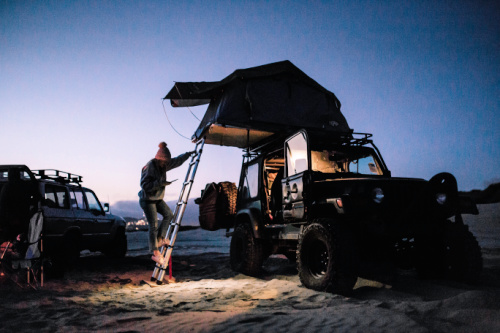 Is Wild Camping Legal in the USA?

Wild camping is legal in certain parts of the US, but it really depends on where you are and who owns the area where you’re looking to go camping.

As a general rule, wild camping is not legal on private land in the US unless the landowner specifically allows campers on their property. This is different from in places like Scotland, Finland, and Norway where there is a protected right to roam that gives campers access to most areas of private land (within reason).

The legality of wild camping on public land in the US will depend greatly on where you are and who manages that land.

In US National Forests and on Bureau of Land Management (BLM) land, wild camping is typically referred to as ‘dispersed camping.’ BLM and Forest Service land is usually pretty open to wild camping, though there may be some restrictions in place in popular or ecologically sensitive areas. Contact a forest ranger in your camping location if you want more specific rules on what’s allowed in a given area.

National parks and state parks have their own unique rules for wild camping (sometimes called primitive camping). Many national and state parks allow backpacking of some sort, but not all of them let you choose your own dispersed campsite for the evening.

In very popular areas of national and state parks, you may need to reserve a specific campsite if you want to head into the backcountry. But the website for your chosen park will usually have plenty of information available about what kinds of camping are allowed in their area.

Can You Sleep in a Van Anywhere?

The short answer is no, you can’t sleep anywhere you want in a camper van, especially in the US. Every state, county, city, town, and municipality has its own rules about people sleeping in vehicles, and, in many cases, sleeping in a van isn’t allowed on public streets.

Now, a landowner may allow you to sleep in your van on their private property, but that’s a different issue altogether. But many jurisdictions consider sleeping in your van on the street or in a parking lot to be trespassing or against city ordinances unless you otherwise have permission to do so.

To be clear, many people do sleep in their vans in urban areas where doing so isn’t technically allowed. But sleeping in a van when it’s not permitted can lead to fines and other penalties, so if you choose to do so, it’s at your own risk.

Related: Where can I Find Free Campsites? (Anywhere in the U.S.)

Dispersed camping is an awesome option for people who have the gear and skills necessary to be self-sufficient while outside.

Many adventurers love to go dispersed camping because it provides them with a free or low-cost way to spend the night in the mountains away from other people. While dispersed camping is often more work than staying in a campground because you have fewer available amenities, it can be a nice choice if you want to get away from the crowds.

Just remember that the rules regarding dispersed camping can vary a lot from place to place. If you’re ever in doubt as to whether dispersed camping is allowed in your area, contact a local land manager for more detailed guidance.

What does Cowboy Camping Mean in Backpacking?

What is the Difference Between Camping and Glamping?

What Does Pull-Through Mean in Camping? (RV FAQs)