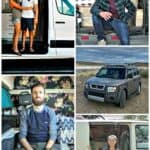 The freedom of vanlife can be incredible, but being awakened at 2am by someone checking if you’re sleeping in your van takes a bit of the magic out of the experience. To help counter this, many vanlifers chose to build a stealthy van that blends in to city streets or mountain scapes.

Stealth van camping is when a converted camper van has few outside modifications, giving passerbys no clear identifcation that someone may live inside. Often, stealth camper vans have a cab partition, blackout windows, and minimal solar panels or roof vents.

We’ve found a few stealth camper vans who shared their experience of why they chose a stealth camper, their favorite sneaky modifications, and their tips and tricks for going unseen.

While we’ve gathered our favorite stealth van campers on the web, we also interviewed one who built out his van himself. Following are their favorite elements of their stealth van, and their recommendations if you’re considering one as well.

Kensie West and Joey decided to share their love of van life with those unable to build a van themselves. Their first client build uses a 2018 Ford Transit as the ultimate luxury van for one while remaining stealthy. The Transit is a little taller than the well-known Sprinters, although you sacrifice a bit of length with the Ford. For a solo traveler, though, it works out great.

To maximize the stealth factor, they included a partition wall with a locking door separating the body from the cab. This eliminates anyone peering in from the front and keeps valuables sealed away. In addition, they opted against adding any side windows in the back and added a skylight instead.

With three different skylight positions, a bug screen, and a blackout option, it provides plenty of natural light without sacrificing the stealth factor.

Another big desire for them keeping fill points to a minimum on the outside of the van. Water or gas intakes practically announce that someone is camping inside. Instead, the water fill hose is tucked under the bed to be filled when the back doors are open. While you add a step to filling your water tank, it keeps your van from sticking out.

Lastly, the low profile solar panels are barely noticeable from the side. By mounting them as close to the van as possible and limiting your solar needs, you can easily keep them mostly tucked away from view.

All in all, Kensie and Joey emphasize that everyone lives different lives and has different needs. One person’s dream stealth van may look a lot different than yours. Choosing what your wants and needs are ahead of time will save a lot of headaches and last-minute decisions during your van build.

To check out what Kensie is up to now, you can check out her Youtube Channel or her company website, Superstition Customs.

Meet DualEx, the man who converted a 2002 GMC Savanna Van to an urban stealth camper. Nicely outfit for one, his van has a slide-out bed that converts to a couch during the day. His setup includes a TV, and every moving part has been well-secured to not move.

DualEx wanted a stealth build for his urban camping environment. By foregoing large solar panels, awnings, and other obvious van life accessories, he can cruise around town without anyone wondering who might be inside. But, just in case someone does get curious, he included many secret compartments inside using false floors and such in cabinets for keeping valuables safe.

He focused on making things easy to use, like opting for a battery-powered faucet rather than a hand pump. He included an oven in his build too, making sure to not miss out on any of the comforts of home.

His 100W solar panel is very low profile and goes unnoticed on most days by passersby. To help limit people glancing in, he blocked out the back windows and used a blackout curtain to create a partition. Using magnets to hold the curtain in place, no bit of light gets through.

DualEx also recommends anyone building a stealth van doesn’t upgrade the front cabin too much, or it will be clear that it’s more than just a regular van inside!

The one upgrade in the cab he included was a backup camera. While he wired it into his rear light wire so it only comes on when he is in reverse, you could choose to wire it into a more consistent source and have it double as a security cam.

To see everything that DualEx used in his van build, as well as tips and tricks for how he built it, check out his blog, Stealth Dweller.

Vanessa and Her Stealth Cargo Van

Vanessa tucked her whole life into a Ford Econoline. The stealthy exterior barely nods to the fact she lives inside, with the low-profile solar panels and roof vent. Other than those small accessories, her van blends in with the rest of the Vancouver cityscape.

Vanessa chose a stealthy set up so that she could park on city streets without being noticed. She often parks outside of her job or friends houses’ without needing to give a second thought. In addition, she loves having all of her belongings with her – all the time. As an artist and musician, she is always ready if creativity strikes.

One of her favorite gadgets for going stealth is her WiFi extender. The small box mounted on her roof allows her to steal WiFi from a distance if she already has the password. So, she can easily borrow a friend’s or coffee shops’ internet from inside her van if she parked relatively close.

Vanessa also uses removable Astroturf on her roof for relaxing and as a carpet in her van. It adds spunk and is incredibly easy to shake out and spray off to clean.

Vanessa recommends that anyone considering a stealth van life weighs everything they put inside. You want to go minimalist, and every item needs a reason to be inside the van and make you happy. Then, not only will you be saving money on rent and random purchases, but you will have a greater appreciation for all your possessions.

To learn more about Vanessa and her van life journey, check out her blog.

Tyler lives in Vancouver in his converted Ford E-350 work van. This incredibly tall van is camouflaged by appearing to be a contractor vehicle. Tyler keeps his thick OSHA manual binder on the dash with two high-vis vests hanging on the seats. After adding four cones around the van, no one bothers him with his ultimate disguise.

Tyler chose to minimize his electricity pull and was able to forgo additional batteries and the need for solar. Instead, he has a large Pelican cooler that keeps his food cold for seven to ten days when packed with ice. His gravity-fed water tank minimizes electricity, although he can pressurize a water tank with a bike pump or 12-volt tire compressor if needed.

The van lighting is limited to 3 2W light bulbs from Goal Zero that run directly off the van’s battery. With a USB converter, he can charge his cell phone and other gadgets without trouble using the van’s battery as long as he drives the van every few days.

Lastly, the privacy partition separating the living space from the cab is crucial to a stealthy van. If you’re thinking about trying out the stealth van life, Tyler says to just jump in. You’ll find a way to make it work and reap the rewards.

Lazaro of Ztribe about His Stealth Camping Honda Element

Normal car on the outside – fully functional stealth camper on the inside. (photo: @ztribe)

Why did you decide to do a stealth build vs a more traditional setup?

“My work requires extensive travel, working ten plus hours a day. Moving locations often, sometimes every day. Many times I am in urban areas and don’t want to spend time looking for a safe ‘legal’ space to camp, so stealth mode was a no brainer. I get off work and I’m already home. Nobody is the wiser that I have claimed a parking space and made it my home.”

What are some pros and cons of this type of build?

“The major con of this build is space. The larger the van, the more obvious the chance it has been converted and someone’s camping there; especially in these times when conversions are so popular.

The pro’s are obvious… the build is not obvious! I can park on a dim city street and I’m just another car, yet I can post up next to a lake in the forest, open everything up, and enjoy the benefits of a full-on larger camper!”

What advice do you have for anyone considering going “stealth”?

“Advice? Keep it simple. I knew my needs and built around that. I still have power, a hot shower, and fridge/freezer; but from the outside none of this is obvious. A large solar array, satellite dish, awning, even stickers advertising this lifestyle all throw red flags. I think most authorities just turn a blind eye… but I’d rather not take that chance while having a few cold drinks after work.”

“I don’t have a blog. Best bet is to find me on Instagram @Ztribe. I think most of my conversion is represented there.”

How do you make a stealth van?

What sets a stealth van apart from a normal camper van is its lack of accessories or stickers outside and its heightened privacy. With this, you will need to store anything you need, including bikes, surfboards, or other equipment, within your van. So, plan accordingly. Most stealth vans have a large garage underneath the bed to accommodate the things other camper vans often put on their roof.

In addition, stealth vans need good privacy curtains and a partition. This keeps your van life paraphernalia from being obvious when people peek in your windows. Lastly, solar panels and electricity needs should be kept to a minimum. By opting for electricity-free appliance options and fewer lights, you can minimize – or even skip – solar panels all together. They are one of the clearest signs of van life.

Here’s a few more tips and tricks for stealth camping:

By following these few steps, your van can be a stealth van with just a few tweaks.

What van is the best for stealth camping?

The best vans for stealth camping are minivans, low-roof cargo vans, box trucks, or a non-Sprinter van, such as a Ford Transit or Ram Promaster. These are popular for other non-vanlife uses and are much easier to disguise, although the build and standing room may pose a few difficulties.

Sprinters, VW buses, and school buses are notorious for being campers vans so stay away from those if you want to be truly sneaky.

What Vans Can You Stand Up In? (Conversion FAQs)

How can I get Internet if I Live in a Van?