One of the most daunting leaps for prospective van dwellers is deciding upon the best camper van to move into. Before I settled on my beloved camper van (known more warmly as Penny), I was overwhelmed with options. Although I wanted my new home to be safe and reliable, I was also working with the budget of a 19 year old wanna-be-writer-but-actually-just-a-waitress.

In other words, those pretty Sprinter and Promaster vans –  off the table.

I scoured Craigslist for months, and found that most of the used vans seemed to fall into two extreme categories: way out of my budget, or missing both a transmission and three wheels. However, over time, a pattern began to materialize. Of the vans that fell somewhere in the sweet spot of lower mileage and a price range under $15,000, roughly ninety percent seemed to be Fords.

However, despite my own personal bias, there are various objective factors that fuel my opinion of the superiority of this camper van. Let’s break down some more specifics regarding buying new versus used, as well as some other factors to consider before investing in any camper van.

Let me be clear. It does not matter how adept you are with vehicles or how well you take care of your van. You will run into mechanical issues. Every single person I encountered who was also living in their van expressed a similar sentiment. Living in your van puts strains on it that normal commuter vehicles do not experience.

Buying a new van will likely prolong the gravity of mechanical issues you will have to deal with. However, it depends on your personal adeptness with vehicles. If you feel comfortable handling most mechanical issues without having to take your van to a shop, buying a fairly used van and purchasing parts along the way might be more economical than buying new to begin with.

Regardless, plan on investing several thousand dollars into your van post conversion. Some van lifers I have met have been luckier than others, but the vast majority of us invested more into unpredictable errors than any of us expected, regardless of whether or not their van was bought new or used.

Another major benefit to buying a Ford camper van is the ease of serviceability. Various Ford parts are available nationwide, and in my personal experience, there is a greater chance at Ford literacy amongst mechanics and individuals than other, more niche makes. Again, this might not be as big a deal for those who are willing to delve into the mechanics of their own vehicle.

Even so, buying and locating unexpected parts for a Ford is much more feasible than some other camper vans, and might help get you on the road faster than having to hunt down international parts. Another benefit to the 1998 Ford American Way is the year. Some older vans have parts that are no longer manufactured.

However, I never had any problems replacing different parts of Penny, largely in part to her relative youth.

If buying new is the route you want to take, I recommend you look at the Winnebago Solis. Although the price tag is still over $100k you’ll get the comfort of a trusted brand and any warranty options included. In this case it is appropriate to say that “affordability” is relative.

Most Higher end class B camper vans can easily surpass the $150K price point – so, this makes the Solis look like a steal.

Another option if you want the peace of mind of a new vehicle is to go the kit conversion route. Buy a new van of your choice and then buy a conversion kit from a company like Wayfarer Vans. This way you can get the best of both worlds – reliability and no six figure price tag.

How to find an affordable USED camper van

Aside from the Ford American Way, the Ford E350’s are another popular choice for affordable camper vans. They are more prolific than the American Ways, and have the same benefits of popularity (hence easy serviceability), endurance, and affordability.

Here are two resources for locating a used van suited for your lifestyle:

On the other hand, buying from a dealership helps you avoid any deceit that was hidden under the guise of Craigslist. From personal experience having bought directly from the owner, the true past of Penny was not revealed to me. Had she been sold through a dealership, I probably would have been told a cleaner version of the truth.

In addition, there was various add-ons (tools, etc.) that the seller promised to me the following week once he acquired them from another location. Though unsurprising, but still disappointing, those promised goods never materialized after the post-purchase ghosting.

I found my 1998 Ford American Way on Craigslist in Phoenix, Arizona. It took various searching and sifting, but Penny eventually appeared in the Craigslist search. With only 40,000 miles, listed for roughly $14,000, she was in great shape, and her resale value also appeared to be reasonably high.

Another appealing aspect to Penny was that she was already mostly converted, and in good shape mechanically. Overall, I put around $1,500 into her conversion and mechanical check ups. 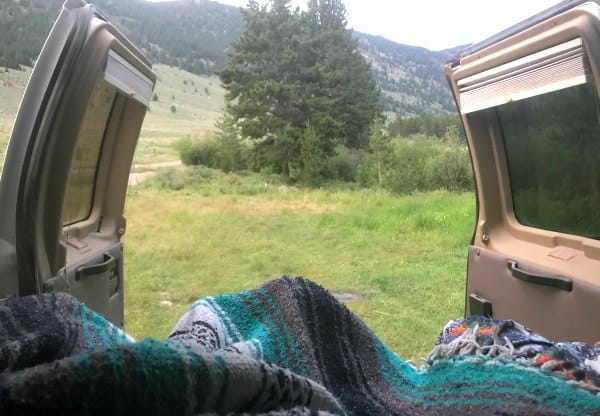 I bought Penny with cash directly from the owner. Although she was in great shape, there were some truths withheld from the seller up front. After doing my own research, it appeared Penny had not been owned by two previous owners (as advertised), but roughly seven.

This revelation generated some suspicion as to the other stated features of the van. Regardless, her mileage and odometer were concrete, as was the well-taken care of shape she was in.

Despite Penny’s youth, I still ran into various mechanical issues along the way. I invested around 600 dollars into on-the-road mechanics, which ranged from a broken battery isolator to a transmission failure.

Then came Abingdon, Virginia. Penny was completely totaled in an accident. In that moment, I thought I had seen both my car and my home entirely destroyed. Lesson learned: car insurance is fantastic. The total out of pocket charges hovered around $100, despite two weeks of repair during which I slept on a friend’s couch.

And still, after all the tough love I gave Penny on the road, I was able to resell her for roughly $13,500, due mostly in part to her low mileage and converted interior.

Do camper vans hold their value?

As unsatisfying of an answer this is, it depends. As a general rule, yes. However, the journey you take your camper van on will affect this greatly. Did you get in a car accident? Were there any recurring mechanical issues? How many miles do you put on your van?

How long have you had your van, and what year was it when you bought it? All of these factors could change the answer. But in most cases, if you treat your van well, it will hold its value even after a significant amount of time.

How do you buy a used camper van?

There are various routes people take in order to purchase their camper van. The first step is scrolling through various boards such as Craigslist and RVTrader. On these sites, you can begin to get a general sense of vehicles you might prefer, which models are in your price range, and general availability.

From there, you can go about conducting a more specified searches for specific camper vans. It is then up to you whether you are comfortable going the route of for sale by owner, or if you would prefer to go through a used car dealership.

Either way, make sure to go see the camper van in person, do a test drive, and conduct your own background check on the vehicle (especially if for sale by owner), in order to ensure that everything is as legitimate as it is claimed to be.

It is easy to feel overwhelmed when beginning the process of purchasing your van, especially with such a plethora of options now available. Mitigate this stress by creating hard boundaries that your van has to fall into. This is completely personal, but might include factors such as price, height, length, mileage, etc. Sticking to these parameters helps to narrow your scope.

From there, it is best to choose whether you will buy new or used. If new, then hopping to various dealerships around your city is the best option. If you decide to buy used, then take advantage of resources like Craigslist, RVTrader, and even Facebook. There are ways to publicize your interest in buying a van, which is often reciprocated through the grapevine by others trying to sell theirs.

“Adventure awaits, and your van is simply a vehicle to transport you there.”

Up Next In Van Life:

Is It Safe To Campervan In New Zealand?

Why Camper Vans are Always White