Depending on the context, mountain lions (also referred to as cougars) are scary. Their behavior can run the spectrum from benign to truly dangerous, and they live all over the country. Opportunist hunters, they are smart and strong enough to catch prey as large as adult humans. There have been several news stories of close calls recently in the Pacific Northwest and even a recent fatality in Oregon.

If you see a cougar while hiking: Keep your cool and be as intimidating as possible by presenting yourself as large, loud and threatening. This is typically enough to detour the animal. It’s also very important to stand your ground and never turn your back.

However, if the situations becomes more extreme and contact is eminent, it will be time to defend yourself and fight for your life. We’ll go into the specifics below…

I recently had a close call with a mountain lion…

Last summer, while riding the Great Divide Mountain Bike Route, I was camped out 80 miles north of Butte, MT. Diligent with our bear hangs and clean camp, our isolated high-country camp was beautiful, serene and quiet.

We were 30 miles from pavement and probably our nearest neighbors for the night. Night had fallen and I had already taken my contacts out. My friend Sam pulled me over to him: “dude I see eyes in that bush”. 30 feet away, sure enough, there was a pair of greenish-yellow twinkling orbs a few feet above the ground.

“They stood stock still for maybe five minutes, as we sat silently. After a relaxed blink, they began to move to our left, orbiting us slowly. They traveled through the bush, unwavering. As they exited the foliage, we saw that they were attached to an adult cougar, sunk low on its shoulders, staring us down.”

We immediately grabbed bear spray and knives, trying not to cause too much chaos. Keeping lights on it and yelling, we watched it walk in a neat, 30 foot semi-circle around us, just outside the light of our headlamps. Yelling and standing on a stump, we did our best to keep it in sight and not look small.

Every time it emerged from the bushes, it looked aggressive, ready to attack. Eventually, it just lost interest and walked away, breaking its stare with us it had held for fifteen minutes. It had showed no inclination towards the bag of food hanging from a tree 100 yards away. It had clearly been interested in us.

Falling asleep with our bear spray beside us, we wondered if it would be back. We had watched it walk straight away to the very edge of our headlamps’ light, and it had been almost totally silent the whole time. It did not come to bother us again.

We obviously got lucky in our encounter. If the cougar was hungry enough, there would have been little we could do to scare it away, and less to repulse it. The outdoor media world is full of stories of hikers fighting off mountain lions with pocket knives, and those stories usually end with a dead combatant on one side or the other.

Mountain lions are fierce and should be given a wide boundary. Should you encounter one, there are some steps you can take to mitigate the chances of a nasty encounter, however.

When and where are you most likely to encounter a mountain lion?

Mountain lions, like most hunters, prefer any time but the daylight, hunting primarily between dust and dawn. Stalkers by nature, their strategy generally centers around following and pouncing on prey, lunging for the spinal cord to ensure a quick kill.

Their biggest common prey is deer, though in recent years, cougars have occasionally attacked human recreationalists in their territory. Cougars are strictly carnivores though, so your leftover vegetables won’t attract one. Meat, however, might.

Cougars live in a variety of habitats, but they particularly enjoy terrain with dense undergrowth to hide in. They can survive a variety of temperature and moisture ranges, happy from the desert to the sub-alpine mountains. They are becoming more common on the fringes of urban areas, but are generally easily scared off by people.

Mountain lions survive at low population densities and are very territorial, so we thankfully do not have to deal with hordes of lions running around together!

One fun fact about mountain lions is that they actually cannot roar like other big cats, but instead make a range of noises similar to house cats: purrs, growls and hisses. While they are certainly quieter than the biggest of big cats, it doesn’t diminish their abilities as hunters! 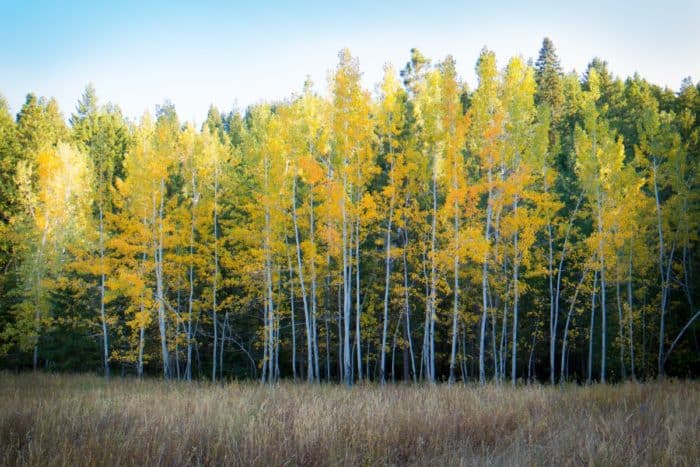 A mountain lion hides perfectly in grassy alpine environments like this. It’s very rare to see them, but they have definitely seen you.

How do you scare away a cougar?

By and large, cougars are very skittish towards people, vastly preferring to remain in the shadow, and often in the next valley! As my story demonstrates, however, not every mountain lion is the same. The same rules apply to mountain lions as other big predator threats in the wild: be big, be loud, and don’t back down.

Aggressive cougars are sizing you up for a meal, so the best you can do is communicate that you are too dangerous to be worth eating. Certainly don’t try to run away, as adults can reach speeds of up to 50 mph.

One tactic that I’ve found helpful is having light. Especially at night, when an encounter is most likely, a bright headlamp or two right in the cougar’s eyes can help convince it that it won’t be sneaking up behind anyone. The proverbial fire to scare away predators isn’t as effective, as the light isn’t directed.

There are still many shadows for them to disappear into. I also found that the occasional throwing of objects helped to deter a violent encounter. I don’t throw to hit the cougar, but rather to scare it away. All that and a lot of noise helped us look much more threatening than we were.

It of course goes without saying that turning your back for any length of time is a rather bad idea.

How do you defend yourself against a cougar?

Should a cougar launch to attack you, the most important thing you can know is how it will attack you. It will lunge for your spine, trying to immediately break your back. Protecting your back, and keeping the animal in front of you, is vital to survival. From there, I always carry bear spray in zones I think I might encounter a big cat. No one likes pepper spray.

There are stories of hikers surviving attacks and killing cougars with pocket knives, It certainly isn’t the ideal tool, but it’s better than nothing. Adult cougars can run up to 180 pounds, and while you may go to the gym pretty regularly, you weren’t made for killing like a mountain lion.

The more tools you can bring to bear, the better. A nearby rock can be helpful if nothing else is available. Once you engage with it, as I mentioned, do not run, as the mountain lion will be presented with its favorite target (your backside).

Can you use pepper spray on mountain lions?

As noted, you can pepper spray mountain lions. Pepper spray, when used against bears, is often a great way to help convince the bear that attacking you is a bad idea. With mountain lions, the spray helps give you an advantage in a fight. Save it for when the cat charges.

It is critically important to know how pepper spray (ideally the large, ‘bear spray’ variety) works before you are stuck trying to figure out the cap while eyes blink in the bushes. Buy an extra can and practice. It is meant to be used one-handed and has a very finite range, especially depending on the wind direction.

There are many stories of bear attacks where the victims accidentally sprayed themselves as the bears charged. The longer you can hold off spraying your single charge, the more effective it will be. Make sure you know where the spray comes out and whether the can is expired (they do expire).

Once the can has been used, the residue is often an attractant for any number of creatures (including bears and cougars), so be sure to wash everything it comes in contact with.

Are mountain lions afraid of dogs?

Cougars are not afraid of dogs. Unless your dog is colossal, it probably looks like any number of prey items for the mountain lion. If you are in a zone with lots of noted mountain lion activity, keep your dog on leash, as they can often ‘fetch’ lions much as they do bears.

Even the biggest dogs are going to be hard-pressed to defeat an adult cougar, but a dog barking (on leash) while you try to scare away a stalking lion wouldn’t hurt at all.

The vast majority of mountain lions are totally non-threatening to humans. They prey on deer and smaller animals, but by and large, not people. You likely won’t even know there are cougars in the area, as they are so skittish.

However, if you do see a mountain lion, the situation is likely serious. Be sure to keep your cool and be intimidating. Follow the rules for predator encounters, staying large, loud and threatening. If a cougar is stalking you, it is likely desperate and won’t be shaken off like most other large animals.

The more you can make it feel seen and watched, the better control you will have over the situation. And carry bear spray (real bear spray) if there have been recent cougar encounters in your area. You never can be too prepared.

What To Do If You See A Coyote While Running?

What Are The 10 Essentials for Day Hiking?