Class B motorhomes are a great choice for people who want something streamlined and small. They’re easier to handle than larger motorhomes, but they still offer plenty of comforts while on the road. However, they seem to cost more than other classes of motorhomes.

So, why are Class-B motorhomes so expensive?

The short answer: Class-B motorhomes are so expensive because they cost more to make per square foot than larger models, and they are very labor-intensive to build. Also, Supply does not meet the extremely high demand, which means people are forced to pay more for them than they may actually be worth.

In the rest of this article, I will explain in detail why Class B motorhomes are so expensive compared to other classes. I’ve broken this down into five main factors, so you can decide if the cost is worth it to you.

The top 6 reasons Class-B motorhomes are so expensive:

The main factor that people will point to regarding why Class B motorhomes cost so much more than other motorhome classes is their production costs.

This is for a few reasons. A Class B camper is, essentially, a remodeled van. That means the space available to work during production is reduced compared to larger models.

In fact, while a larger van is essentially two structures attached together, a vehicle and a living area, the Class B is all one unit. It’s essentially a van that has had its seating or storage area converted into a living space.

However, just because there’s less room inside a camper doesn’t mean consumers are willing to give up certain amenities like having a bathroom or a kitchen area.

This means everything needs to be specially designed to fit a smaller area. Companies can’t just use products built for motorhomes in general because they’ll likely be too large for the Class B’s interior.

Since everything used when building a Class B needs to be customized and special-ordered, that adds extra cost in itself.

However, the materials needed to build Class B camper vans are also more expensive. Since these campers are considered vehicles, the materials used in their production have to pass vehicle standards. They also have to be able to fit in a small space, which limits options and adds extra costs.

Since Class B’s dimensions are smaller than typical camper’s, they also require more skill in their assembly. Specialized workers need to be employed who are able to work in small spaces without sacrificing quality workmanship.

Another factor that explains why Class B motorhomes are so expensive is their fuel efficiency.

Since these campers are smaller, they’re also lighter and are able to go further with a tank of gas than a larger model.

It might seem counter-intuitive for a fuel-efficient vehicle to cost more because more and more people are being encouraged to purchase vehicles with better gas consumption.

However, since having a camper that gets better miles per gallon means there is less need to stop at service stations, you’ll save money in the long run. Essentially, you’re paying more upfront in part for something that will end up saving you money in the end.

If an even more fuel-efficient version of this camper were to end up on the market, it’s likely the price of current models might go down while the cost of those would sky-rocket.

Paying more for convenience isn’t a new concept in any market. People pay for cleaning services and for pre-made food, as well as things that are simpler or more comfortable to use and more. The same goes for vehicles and campers.

Many would-be motorhome owners forgo purchasing one because the idea of driving such a large vehicle is daunting. It can be difficult to maneuver such a large machine in parking lots or down streets.

That’s where the Class B model comes in.

Since they’re modified vans, the idea of driving them is much less intimidating compared to a large motorhome that would be similar to driving a bus. While a van is still larger than the average car, it takes less time to adjust to them. This use, however, doesn’t come for free.

People who want the convenience of having a camper van that’s easier to drive than a larger model will have to be willing to pay for that extra perk that comes with a Class B van.

With more people interested in traveling and downsizing, it’s no surprise that the Class B motorhome model has become so popular. After all, why go through the trouble of converting a van into something you can travel and live out of when the Class B manufacturers have done that work for you?

However, this popularity comes at a cost. These models’ supply and demand relationship doesn’t match up because there is a higher demand for these campers than there campers readily on the market. Some manufacturers are reporting massive backlogs and cannot keep up with the demand.

Since it takes so much extra work to make these models, not as many are built. There are fewer of them available at any given time, and replenishing stock isn’t as quick as models that are easier and faster to make.

Until the popularity of Class B dies down, companies will be able to charge more for them comparatively speaking because they know people will be willing to pay the extra cost.

A final reason why Class B motorhomes cost so much is that they don’t diminish in value the way other vehicles do.

Typically, once a motorhome or other type of car leaves the lot, barring some exceptions, it starts to decrease in value. The person who bought that vehicle will never be able to resell it at a similar cost.

The exceptions to this rule are:

A Class B motorhome is a versatile camper that is fuel-efficient, easy to drive, and currently seeing a huge spike in popularity.

All of those factors mean that this model will manage to maintain its value much better than other models on the market. A Class B owner will likely be able to resell their camper for a similar if not equal or greater value than what they purchased it at.

That makes these campers an investment that could be considered less risky than older models should an owner decide to sell theirs.  Companies know this, and they know the resale market might lower the number of new model sales.

They also know that, since people are willing to pay large amounts of money for a used model, they can keep prices for the new motorhomes high because people will be willing to pay it. 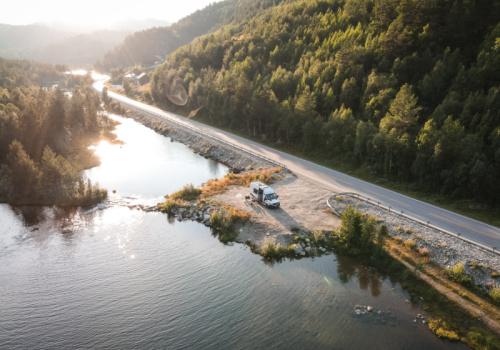 6. Cost Comparison to Other Models

It’s important to note one thing that causes Class B motorhomes to cost so much. While this article compares Class B models to other types of motorhomes as far as general cost, that doesn’t mean that Class B campers literally cost more money than larger models.

As far as the numbers are concerned, larger campers still have a higher total cost than a Class B.

Instead, we’re referencing the proportion comparison of a camper’s size and cost. So, don’t expect to be able to use your camper budget on a large model when you initially wanted one of these smaller versions.

Class B motorhomes are having their moment of popularity. The appeal of being a digital nomad and traveling the world in a camper van is an appealing one when you want to get away from the city. However, if you’re interested in purchasing a Class B van, be sure to budget for the hefty cost of having what is, essentially, a modified van.

What are the Smallest Class C RVs?

What is the Best Class-B RV for the Money?

What Is the Smallest Class B RV?