When you’re out and about in the great outdoors, you’ll need to eat to stay fueled and energized on your adventure. For many of us, cooking outdoors is a bit of a hassle and can be a messy, time-intensive affair.

Thankfully, there are plenty of quick and easy ways to get a nutritious meal in the backcountry. When planning for a camping trip, many people wonder if MREs are a good food option for backpacking.

MREs or “meal, ready to eat” are a staple of the military diet while on missions and have become more popular among outdoor enthusiasts for their camping trips. But, are they really the best option for your adventure?

Coming up, we’ll answer all of your MRE-related questions, giving you all of the need-to-know information about MREs before you head to the mountains. Lets get to it!

So, are MREs good for backpacking? Simply put, MREs are good for backpacking, but they’re not the only option. These “meals in a bag” make getting enough calories on a backpacking trip a no-brainer, but we wouldn’t say that they’re your best choice. In fact, there are plenty of better options that are lighter, cheaper, and way tastier than MREs.

MREs are often seen as a good option for backpacking trips because they are a self-contained meal that is quick and simple to eat. They have a lot of calories (which is good for active backpackers) and take minimal effort to prepare. In fact, you can eat them right out of the bag.

Unforunately, that’s more or less where an MRE’s advantages stop.

While MREs do make mealtime simple in the backcountry, they come with a whole host of disadvatages, including:

What exactly is an MRE?

Okay, okay now you understand the advantages and disadvantages of using MREs while backpacking, but what is an MRE?  Simply put, an MRE is a “meal, ready to eat.”

They were originally designed for use as rations by military troops on deployment and are desgined to be a completely self-contained meal with all of the calories and nutrients you’d find in a well-rounded civilian meal.

MREs come in a durable box with a number of different food and drink items. In general, an MRE contains:

The standard MRE is supposed to provide around 1250 calories (13% protein, 36% fat, 51% carbs) as well as 1/3 of the Military’s recommended daily allowance of the essential vitamins and minerals. A soldier, sailor, marine or airman’s daily ration of food would contain three MREs on while deployed or on a field training exercise. 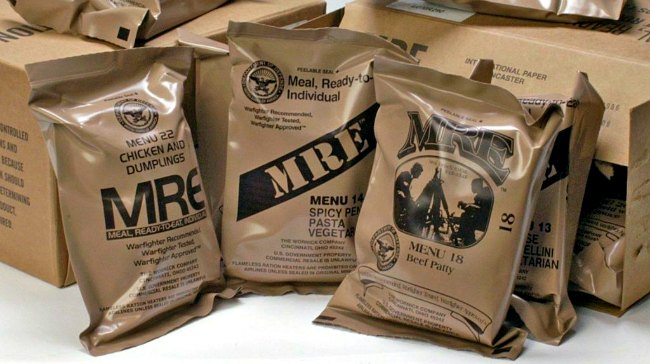 How to eat an MRE

As the name suggests, an MRE is ready to eat, right out of the bag. You don’t actually have to heat up the entree or side dish to be able to eat it, but it is a nice touch that can add some flavor. As far as the beverages go, they do taste better when you add water. Besides adding water and heating up the entree, you can eat the contents of an MRE right out of the bag.

Where civilians can buy MREs

It turns out that the US Government actually doesn’t allow MRE manufacturers to sell military MREs to civilians. However, this doesn’t mean that you can’t get MREs, it just means that it takes a bit more effort than going to the grocery store. Here are some ways to get MREs:

MREs are sold at a premium

If you start shopping around for MREs for your next trip, you’ll probably notice that they’re pretty darn expensive. For the most part, the high cost of an MRE is due to the fact that the government doesn’t technically allow them to be sold to civilians, so all military MREs on the market today are surplus that’s sold at a premimum.

Plus, MREs are packed full of a variety of different accessories, such as spoons, matches, and plenty of extra packaging, that make the item’s shipping weight and cost much higher. Oh, and some things, like the included flameless heater, are expensive to buy.

How many MREs should you eat in a day?

An MRE is designed to be a single meal – either breakfast, lunch, or dinner. Thus, an individual should budget to eat three MREs a day, which is what military personnel are rationed while deployed.

Of course, if you’re using them for backpacking, you can choose to have a simpler trail lunch and save the MREs for breakfast and dinner, so you don’t have to eat three a day. Just remember that one MRE is a single meal with upwards of 1250 calories, so plan accordingly.

Military MREs are specifically designed to provide troops with plenty of calories while in combat. They are not designed as part of a well-rounded healthy diet.

Modern MREs are made with a whole host of preservatives and way more sodium than you need, so they’re not exactly a healthy food choice. While we wouldn’t say they’re the worst thing for you to eat, they’re certainly not the best.

But, if you’re only looking to eat them for a few days, you’ll probably be just fine. They’re just not really recommended for long term consumption, even if you are burning a lot of calories.

All military MREs are designed specifically to last for three years when stored at 80 degrees Fahrenheit. As you might imagine, though, their shelf life changes based on their storage temperature, with higher temperatures decreasing their lifespan. 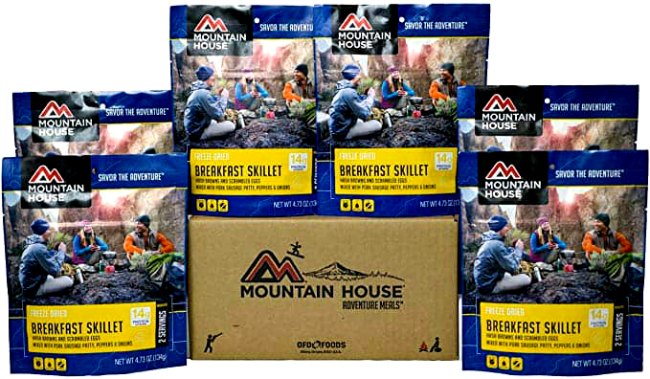 If you’re not sure that an MRE is the right option for your next backpacking trip, you’ll be happy to know that there are plenty of alternatives out there. Perhaps the most popular MRE alternative for backpacking is the freeze dried meal, which was made popular by the company Mountain House.

Unlike an MRE, a freeze dried meal is not ready to eat right out of the packaging. Instead, you’ll have to add boiling water to the freeze dried meal bag and wait a few minutes for the water to do its job – pretty easy stuff. From there, you can sit back, relax, and enjoy your meal.

Our advice? Well, if we had to choose, we’d probably opt for a freeze dried meal over an MRE for a backpacking trip. But, either can be a good option, depending on your needs. Happy camping!

Up Next In Backpacking Food: