One of the most common questions we get from people who are considering converting a skoolie is “Where do you park it?” We are often asked if we stay in RV parks or campgrounds, and whether skoolies are allowed at these types of establishments.

While we ourselves have never stayed in an RV park for reasons I’ll get into later in this article, I spoke with some of our skoolie friends about their experiences staying (or attempting to stay) in RV parks.

So, are skoolies allowed in RV parks? You’ll have to approach each RV park on a case-by-case basis. Some RV parks will allow a skoolie in with no questions, others will require that you pass an inspection, and some do not allow skoolies at all. It’s always a good idea to call ahead and/or check the park’s website to see if they have any restrictions.

Reasons Why an RV Park Would Prohibit Skoolies:

The primary concern for RV parks is that since most skoolies are DIY conversions, their electrical systems might not be built to safely handle being plugged in to standard hookups. If you haven’t built fuses and other safety elements into your skoolie electrical system, there is the potential for a fire hazard.

In this case, parks will often require that you have some sort of certificate saying that your electrical system has been inspected by a professional and deemed safe, or you will have to submit to an on-site inspection by a park employee before being admitted.

Many parks also have appearance- and age-based admittance rules along the lines of only taking manufactured RVs that are less than ten years old. Understandably, they want to prevent hunks of junk from sullying their image, but this hard and fast rule that excludes even the most beautiful and pristine DIY camper can seem a bit biased.

Some cite insurance reasons, but it’s also effectively a way to keep poor people out of their parks, since new RVs are incredibly expensive. However, most RV parks are privately owned so the owner can implement whatever rules they choose.

3. Skoolies have a legacy reputation from the 60s

Private RV parks have the luxury of choosing their clientele, and the more exclusive it is, the more money they can charge. Some park managers associate skoolie owners with hippies, drug users, Burning Man goers, and other similar characteristics that might fluster the feathers of their preferred clientele, which is usually retirees and wealthy weekend warriors.

Despite the fact that this is not accurate for the majority of skoolie owners, the misconception remains.

Why I Never Stay in RV Parks in My Skoolie 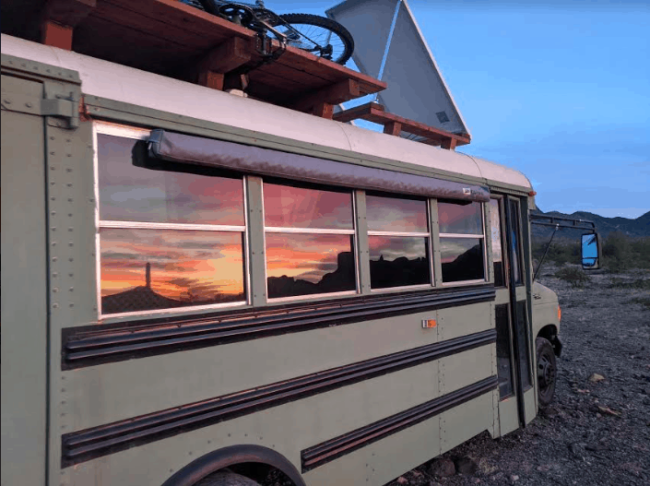 We wouldn’t trade sunset views like these for concrete pads.

Frankly, my boyfriend and I could never justify staying in an RV park. At $30 to $100 per night, it is far outside of our desired nightly budget (which is $0), and we honestly don’t need the amenities.

Our skoolie is designed, as most are, to be fully off-grid capable. We have solar panels and a battery bank that power our refrigerator, water pump, lights, and charging ports, a 20-gallon freshwater tank plus 10 gallons in reserve which combined can last us two weeks if we are frugal with water, and a composting toilet which means we have no black water tank that would need to be emptied at a dump station.

We fill up our water tanks at free fill stations or buy water for a few cents per gallon at grocery stores. At night, we park our bus anywhere that is free, and have not paid for parking in nearly two years. This means that we stay on BLM or other public lands, in parking lots, on the streets, at free campgrounds, or anywhere else where it is not expressly prohibited to park overnight.

If we desperately need showers, we look for rec centers or gyms that offer free trial periods.

How To Shower When You Live In a Van

What Exactly Is A Skoolie?

So, since we can meet all of our needs in other ways, we simply have no reason or desire to stay at expensive (and honestly, usually boring-looking) RV parks. Additionally, we don’t even have the proper connections to hook up at RV parks. We did not build in a charging port on the side of the bus or a way to connect to water or sewer hookups, so it would be pointless to pay for such access.

Plus, we just don’t want to deal with the hassle of explaining our skoolie to skeptical park owners.

However, I understand that some skoolie owners do build in hook up ports on their buses and have money in their budget to occasionally or even always stay at RV parks, or that things like bad weather or other unforeseen circumstances arise, which make staying at an RV park the best or only choice available to skoolie owners.

With that in mind, I asked some friends and fellow members of the skoolie community about their experiences with staying (or attempting to stay) in RV parks. 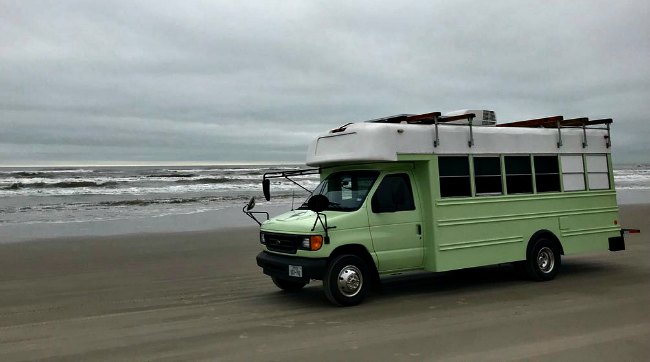 Trae (@theoffroadcamper) shared with me his experience staying at an RV park in Port Aransas, Texas. After checking the park’s website and finding nothing prohibiting skoolies or DIY campers, he and his family arrived at the park, only to be told that they needed to go to an RV company and have their systems inspected and certified.

Since that wasn’t possible in the moment, Trae’s bus was subjected to an inspection by the campground technician before they were allowed in, despite the fact that he did not even need electrical or sewage hookups. Trae was told by the park management that his bus could be a liability if it was not wired or plumbed correctly and he hooked up to their utilities.

Although the park eventually let Trae in since he wasn’t going to use any hookups, he told me that if they had not been so remote or if there were other options nearby as far as places to stay, they would have left based on how poorly the park management handled the situation and how rudely they spoke to Trae and his family.

Regarding the incident, Trae said:

“We understand that there are policies and safety concerns that need to be upheld and protected against, but that information wasn’t posted anywhere on their website or at check-in. If that was their policy, just communicate it in a clear, professional, and respectful way. This wasn’t handled that way… It came across as whoever was working the desk could make whatever call/decision they wanted based on their perception of something other than a ‘professionally built’ RV/camper.”

However, Trae also reported that he and his family stayed at a KOA (also a private campground) in San Antonio, and the park staff there was very kind and did not require an inspection at all. 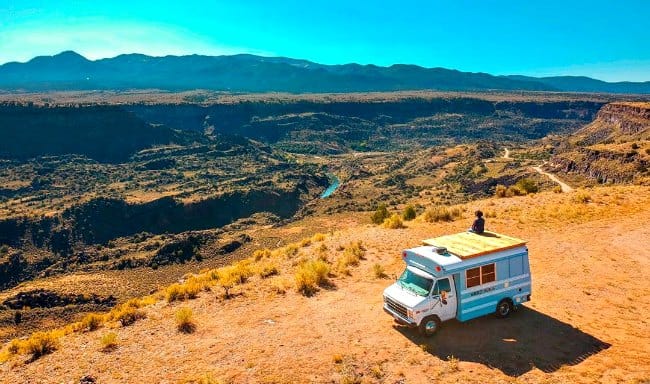 Parker (@birdthebus) shared that he stayed at an RV park for a week when it snowed heavily in New Mexico in October. He said that park staff was initially hesitant to allow him to stay and use the hookups, but that once he showed them his beautifully done RV fuse and breaker panel, they allowed him in with no problem.

The staff was pleasant and welcoming, and only wanted to be sure that his skoolie would not cause a fire.

However, when he has called other RV parks to see if he could stay there, he has been asked for the make and model and been told that the park in question does not take custom vehicles. He has even been denied the use of a dump station, despite only having a three-gallon cassette toilet.

It just goes to show that while some RV parks can be super welcoming and accommodating, others might not even trust you to properly empty a cassette toilet, just because you live in a custom or DIY vehicle. 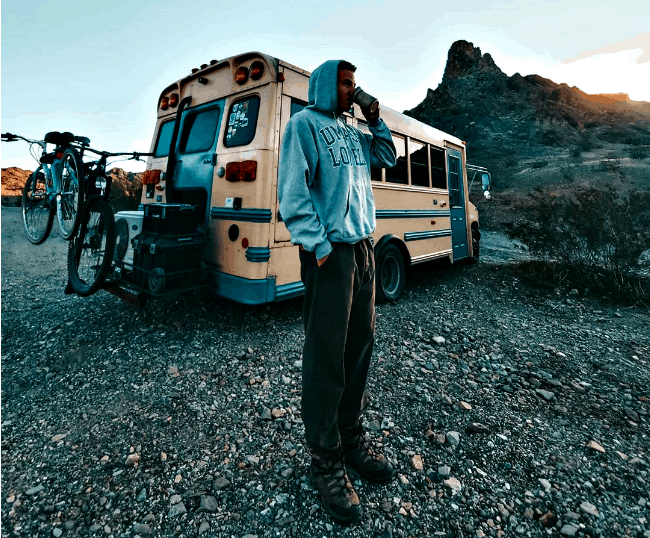 Dan (@minigoesbig) reported that he and his girlfriend have been denied from two or three parks, but usually over the phone instead of when they show up at the park, so they have been able to fairly easily make alternate arrangements.

However, once when they were traveling in Oregon, they booked a spot at an RV park over the phone, telling the staff member simply that their vehicle was an RV, since it is in fact registered and insured as one. When they arrived at the park, they were told that only manufactured RVs less than ten years old were allowed and they were turned away.

They called around to other parks in the area and found that most of them had the same restrictions. 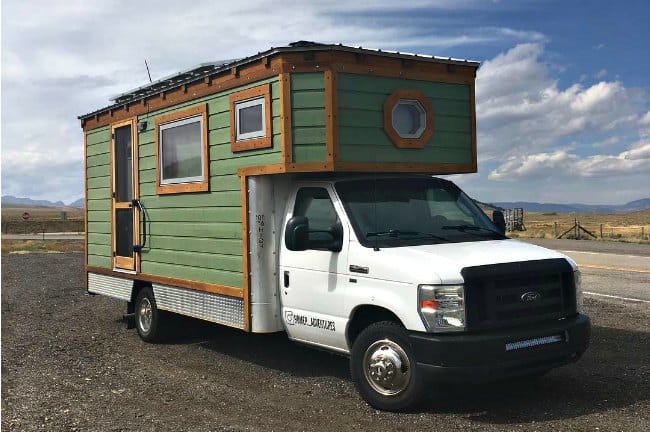 Scott (@homer_adventures) had a very unique camper (which he has since sold), that straddled the lines between skoolie, tiny home, truck, and RV. After being turned away over the phone a few times when he accurately described his vehicle while stressing that he did not need hookups, Scott took to providing only the bare minimum information: he had a 25-foot motorhome that was manufactured by Ford.

Using this tactic, he was able to secure reservations and was not turned away from any more RV parks, although many expressed hesitation at having an “uncertified” RV in their campground.

Scott’s story shows that it’s not only skoolies but all creative and DIY campers that can be subject to discrimination or outright denial by RV parks. However, with a barebones description and some reassurances, it is possible to find parks that will accept such vehicles.

While many parks do have restrictions and inspection requirements, there are certainly RV parks and campgrounds that will allow you to stay in a skoolie. Let’s take a look at some options.

How To Find a Skoolie Friendly RV Park

RV Parks vs. Campgrounds – What To Expect

RV parks are generally privately run, so they have the final say no matter what on who gets to stay at their park. There are also private campgrounds, but they are generally more lax with their regulations, and will allow you to stay at a non-hookup site with your skoolie which will be cheaper and not present the potential hassle of inspections.

RV parks usually have all kinds of amenities like pools, shower buildings, clubhouses, game rooms, mini golf, etc., and while some campgrounds do have extras like this, it’s less common. RV parks are generally going to be more expensive and have more rules than private campgrounds as well.

If you stay in a public campground, like a state or national park, you will not be turned away for the year or make of your RV. These aren’t as exclusive and are generally a bit cheaper per night.

Looking for free options? Check out this article where I detail exactly how we find free camping.

Do Disneyworld and Disneyland allow skoolies? Yes, but it’s a good idea to call them before you arrive to check exactly where skoolies are allowed to park and camp.

Do state parks allow skoolies? Generally yes! If they allow RVs, chances are they will allow skoolies as well. Be sure to check length limits and access road conditions before you arrive though.

Up Next In Skoolies:

School Bus Interior Height – What You Need To Know

How To Get Insurance On a Skoolie | 3 Owners’ Stories