But how is scrambling different from climbing?

The main difference between scrambling and climbing has to do with how technically difficult or demanding the activity is. For something to be counted as “climbing” it typically requires a minimum level of technical climbing ability and, in most cases, protective climbing equipment like a rope, harness, and helmet. Scrambling also requires moving up steep slopes, but the movement involved isn’t usually as technically difficult.

Like all things in the vertical world, there’s some gray area between what constitutes scrambling and what’s considered “real climbing.” In this article, we’re going to take a closer look at some of those similarities and differences so you have a better idea of what these terms mean.

Scrambling and climbing are two activities that people do in the mountains. They’re normally considered separate activities from regular hiking, which is when you walk along trails and only occasionally need to use your hands to pull yourself up over an obstacle.

The issue with scrambling and climbing is that it can be difficult to draw the line between the two activities. In other words, how do you define what’s scrambling and what’s actually climbing?

Many people would argue that scrambling is any form of moving over rocks and other similar terrain that doesn’t require any technical climbing ability.

The word “technical” here is a bit confusing, but it basically has to do with the difficulty of the movements required while making your way uphill. In other words, you don’t necessarily need to use specialized equipment and movements to be able to complete a scramble, but you would require that experience, technique, and equipment for a climb.

Most scrambles are on lower-angle terrain than true rock climbs. They may also not involve as much exposure, or likelihood of a serious fall, as a proper rock climbing route, though this really depends on the scrambling route in question. Some scrambling routes are really just slightly easier rock climbs, so it’s important to do your research to ensure that you know what you’re signing up for.

Contrary to popular belief, however, scrambling is not a “less dangerous” form of climbing.

There are very real dangers and hazards associated with scrambling that are amplified by the fact that scrambling often doesn’t involve the use of protective equipment like ropes and harnesses. A supposedly “easy” scramble can also turn into a very difficult outing if the weather turns sour or if the conditions on the route aren’t as good as you had expected.

Therefore, scrambling is not suitable for new hikers or anyone who has a fear of heights. It’s always best to learn proper scrambling techniques from an experienced guide or climbing instructor before setting out on your own.

What Does It Mean to Scramble When Hiking?

If you open a hiking guidebook and see a note that there’s some scrambling involved in a hiking route, you may be wondering what that actually means.

Scrambling is effectively a form of non-technical climbing. It sits in a bit of an awkward middle ground between hiking and climbing without fitting nicely into either category.

While scrambling, you’ll likely need to use your hands and feet to steady yourself and to pull your body up over steep terrain way more than you would on a regular hiking route. Depending on the scrambling route in question, you may not need to use any protective equipment like you would with rock climbing. But there is still a chance that you could fall and sustain a serious or fatal injury on many scrambling routes.

As a result, scrambling shouldn’t be seen as simply a more difficult version of hiking or an easier form of climbing—it’s a unique blend of both activities that requires its own techniques and skills to accomplish safely. Learning how to scramble under the tutelage of an experienced guide or instructor is imperative before trying it out on your own. 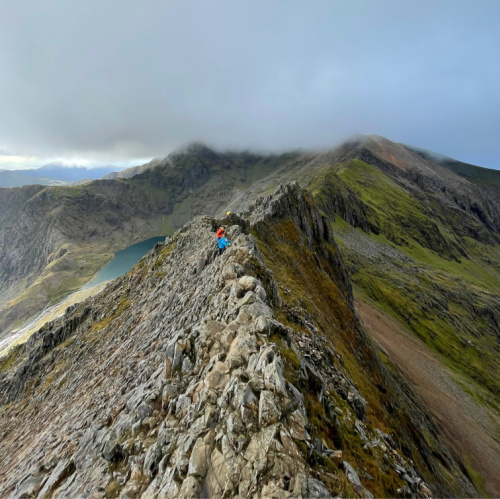 There is no such thing as a truly safe activity in the mountains (or anywhere else for that matter) because every activity comes with some level of risk. Scrambling is no exception to this rule.

While it is true that most scrambles are less difficult than true rock climbs from a technical perspective, this doesn’t mean that they’re any safer. In fact, scrambling is just as—if not more—dangerous than rock climbing because many people who go scrambling do so without the protective equipment that we see on climbing routes.

Many scrambling routes also have a high degree of “exposure,” which is a term that we use in climbing and hiking to describe large drops that pose a high risk to your safety. Falling on a scrambling route that has a high degree of exposure can be fatal, especially given the fact that most scramblers aren’t using ropes, harnesses, and other protective climbing equipment like they would be if they were climbing.

Some very famous scrambling routes, like the knife-edge Crib Goch on Snowdon in Wales, have hundreds of feet of exposure on either side of their narrow path. Taking a fall on a route like this is likely to be fatal or it will lead to some serious and life-threatening injuries.

Even if a scrambling route isn’t particularly challenging in fair weather or even if it doesn’t have a lot of exposure, it can still be really dangerous. Getting caught on a scrambling route in rain, snow, fog, wind, or any other form of bad weather can make it much more difficult to navigate. Slipping on the wrong section of an otherwise “easy” scrambling because of wet rocks can also lead to some serious injuries.

Now, the point of this section isn’t to scare you into thinking that scrambling isn’t something that anyone should ever do. Rather, the idea is that anyone who wants to go scrambling needs to fully understand that it isn’t a “safer” alternative to rock climbing or a more “exciting” version of hiking.

If you go scrambling, you need to be willing to accept the risks involved with the pursuit. As always, it’s best to get expert, in-person instruction on how to scramble before you venture out on your first trip.

Scrambling: An Alternative to Rock Climbing?

Scrambling is a unique way to experience the mountains, but it’s definitely not for everyone. While it’s easy to draw comparisons between scrambling and climbing, they are different pursuits that require their own skills and techniques.

Remember that scrambling isn’t a good option for everyone and it’s not something people should do all willy-nilly. If you want to scramble, you should understand the risks involved, get qualified instruction in scrambling best practices, choose routes that are well within your comfort zone, and be willing to turn back if the conditions won’t cooperate. Remember that the mountains will be there another day.

What is the Easiest Adirondack High Peak to Hike?

What Do Stacked Rocks On A Trail Mean?

How to Climb Glacier Peak Mountain In Washington