Avid hikers, campers, cyclists and rock climbers all rely on trails and paths to keep them heading in the right direction. Those who are tech-savvy use GPS gadgets or their phone’s GPS to help them track their whereabouts.

Having mentioned this, have you ever wonder how our ancestors managed not to get lost in the wilderness or desert? Turns out, they used a very natural way of marking the path. They used rocks and stacked them into a pile to give them bearing and direction during their travels.

So, what do stacked rocks on a trail mean? Stacked rocks, more commonly known as Cairns, placed along the trail signify that you are on the right track. It is a marker guiding you to the correct path or trail in cases where navigation becomes difficult and the trail may be easily lost.

When you see stacked rocks on a trail, this means that you are going the right way and that the path you chose will lead you to your destination. However, it has become harder and harder to determine which rock piles are legitimate Cairns and which ones are made by other hikers just for fun.

The difficulty does not signify that you should stop using Cairns to navigate, it only means that you must not rely solely on Cairns to keep you on the trail.

What are Stacked Rocks or Cairns?

Wikipedia defines stacked rocks or cairns as “a man-made pile or stack of rocks”. The term cairn is derived from the Scottish Gaelic word càrn which translates into “heap of stone” in English. Cairns have been used during the ancient times much in the same that we use them today. However, modern cairns have not gained as good of feedback from many people due to the disruption it causes in nature.

Furthermore, the piles of rock you see at present sometimes denote a different meaning other than being a path marker for hikers. These modern-day rock piles have caused quite a controversy in many states.

Trail Cairn Vs. Stone Stacking: The Difference Between The Two

A news article published by the High Country News, written by Robyn Martin, talked about Cairns and the modern day rock stacking phenomenon that is sweeping the world. She said that these modern day man-made rock piles “are invading wilderness areas everywhere in the West.” She also wrote that “At best, they are pointless, at worst, a form of litter.”

One of the former park rangers in Arches National Park located in Utah mentioned that one of his unofficial jobs is to knock down Cairns that are unnecessary along the trail. He also said that Cairns constructed in the wrong place, even if the intentions behind them are good can possibly lead others astray or it is just plain unnecessary.

He also separated Cairns from stone stacking, mentioning that the two are not the same.

Historically, cairns were intended to mark specific places and junctures in a trail to keep travelers from straying too far. They were also used to mark where a cache of supplies like food and water were located.

It was their very own form of GPS that helped them get back to their starting points or final destinations after a long journey. There are ancient/historical cairns that still remain today. Very few remain and those that do could be considered as national landmarks.

Some modern-day stone stackers, on the other hand, use them to mark vortexes – areas where energies are in complete harmony and balance. These rock piles are also known as medicine wheels and were first seen in Sedona, Arizona. They were built under the false idea of it being a Native American practice.

Another reason why people today stack stones are for a spiritual purpose. Supposedly, native cultures have also used stone stacks to honor deities and remember the dead. A Buddhist writer defined cairns as a form of worship and a way to commune with the forces of nature to ask for balance in life. It may probably be the reason why there are a group of people who believe that stones are a vehicle for prayers.

Unfortunately, places, where more than one or two Cairns are constructed, have gained the wrong kind of popularity. Apparently, many consider this as a travesty to the real purpose of building a Cairn. These rock piles are sprouting like mushrooms in national parks and other areas. Subsequently, it can also be terrible for the environment when rocks are removed and stacked unnecessarily.

In Coconino National Forest, a ranger explained that moving rocks in the forest disrupts the natural habitat of some species that are endemic to the area. 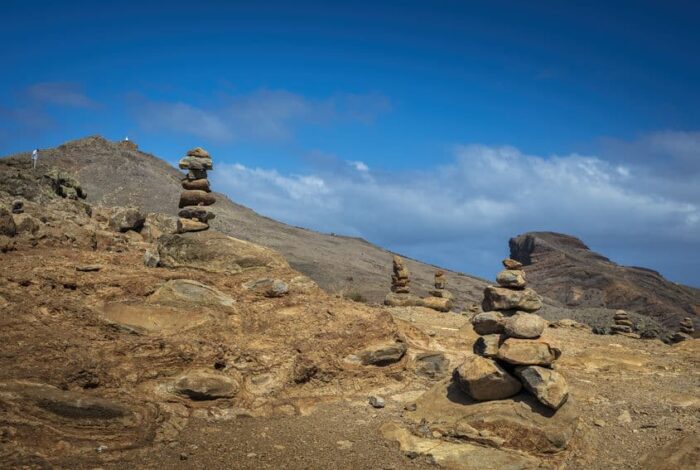 Reasons Why You Shouldn’t Build Cairns

One blogger we discovered during our research wrote an article on why you shouldn’t build stacks of rocks at all. She mentioned that rock Cairns are meant to be used for navigation, safety and the purpose of marking paths and trails without disturbing the natural environment too much. She further clarified that Cairns are not meant for aesthetic purposes, competition, or to build a seat during picnics.

In Aruba, the government is asking tourists to refrain from building Cairns. It is argued that it is unnatural and unnecessary in the environment. In addition, a view of hundreds of rock piles is considered to be an eye-sore and not attractive. It also violates the Leave-No-Trace principle that hikers and backpackers follow.

Another concern is that instead of helping out other hikers, the unnecessary building of cairns can lead others astray. Keep in mind that the real purpose of stacked rocks or Cairn on a trail is to point hikers and backpackers in the right direction. If more than one is placed or if an unnecessary one is created, it can confuse others who are using the rock piles as guide and markers.

It is recommended to end this practice that many consider being invasive and unnatural. Park managers and other conservationists suggest refraining from stacking rocks no matter what the purpose is and to leave the construction of Cairns to park rangers.

The History of Trail Cairns

Our forefathers and their forefathers have used cairns to mark paths and trails to prevent them from getting lost. In fact, the same still applies to some modern-day cairns. The ancients have devised this way of marking their trails because of the many challenges they encountered in the wild.

A good example is when they hunted during heavy rainfall, finding their way back would be very tricky due to a decrease in visibility. Cairns were erected to guide them and lead them to the right path. Cairns are mostly a foot tall but some are quite large and considered as megalithic constructions. The taller ones are built so that it can still be seen even from a great distance and even if it got buried in snow. The shorter ones are the ones that are made to mark paths and lead through regions without far horizons.

Our ancestors also used cairns to mark the burial spot of a fallen comrade. They also erected cairns that are used for burial and other ritual ceremonies. Hunters also built cairns as a defensive shield during hunting.

Who can build Cairns? Cairns can be built by anyone. However, in the case of making one out in the wild during one of your hiking trips, it is best that you refrain from it. Let the rangers and other park employees do this job because they are the ones that navigate the area day in and day out. But if your purpose is for personal use, like in your garden, then you can build them or ask your landscaping guy to do it for you.

What do Cairns symbolize for our wellness? Cairns symbolize, balance, peace, patience, simplicity, spirituality, and prayer depending on the person who constructs the Cairn. Schools have used the practice of building Cairns inside the classroom so that their students can reflect on themselves and realize what their priorities in life are, a form of meditation tool.

Is rock balancing the same as Cairn? No, it is not. The definition of rock balancing suggests that it is more of a hobby rather than an ancient practice. It is considered as an art where rocks are stacked one on top of the other in a balanced fashion without using any outside interventions such as glue, wires, and supports.

To simplify everything, stacked rocks on a trail are man-made stone piles called Cairns and their primary purpose is to mark junctures, paths, and trails for a more straightforward visual cue. There is a long history regarding stacked rocks and it is a rich history where a number of other uses for Cairns can be learned.

However, the modern day man has made the practice of building Cairns into an activity that many don’t approve of. Countless articles and blogs appeal to the public to stop making Cairns because it is unnatural and unattractive. Many think that modern-day Cairns are a New Age form of graffiti. Government and National Park officials have made statements asking tourists, hikers, and backpackers to refrain from building Cairns.

How Much Does It Cost to Hike the Continental Divide Trail?

Can You Hike 20 Miles a Day? (Backpacking FAQs)

Very informative, especially in the recommendations for restraint against building cairns in the wilderness! Good thoughts and guidelines thank you!