The iKamper is a top of the range rooftop tent, produced in South Korea and sold to campers all over the world. The company was founded by CEO Soon Park, a South Korean engineer, professional guitar player, and absolute adventure junkie!

He spent 2 years driving and camping all around the US with his wife and children. After an incredible 58,000-mile road trip, used a combination of engineering skills and outdoor passion to create a high-quality roof tent to get more families into the great outdoors.

Living in a self-converted van, I have 24-hour access to some amazing outdoor location. Nonetheless, I know a rooftop tent and 4×4 could let me reach a whole new world of terrain. I am often tempted to trade for a rooftop tent

As awesome as the tent (and its designer) appears to be, it comes with a serious price tag. Thinking it couldn’t possibly be worth the money, I interviewed 5 iKamper owners.

So, is the iKamper worth the money? The resounding answer from all 5 owners we interviewed is “YES!” The iKamper is absolutely worth the money. Especially for “power users” who are looking to camp every opportunity they can. This roof top tent gives them the freedom to get away at a moments notice and do it in comfort.

Here is what they had to say. We cover the pros, cons and ultimate verdict…

Why did you choose to buy an iKamper?

Igor (@4runner_4life) has paired his iKamper with a Toyota 4runner. He chose to buy the iKamper because he prefers rooftop camping to sleeping on the ground.

“I’m not a fan of sleeping on the ground. In a dry summer, it can be dusty. If it’s raining – water can flow under the tent.”

What’s more, he finds the iKamper really quick and easy to set up. He can get everything ready in less than 2 minutes! 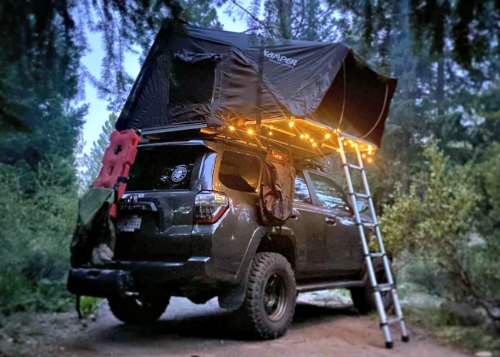 Ben (@ben_out_co) agrees with Igor about the setup time. He chose it because of the rapid set up, as well as the hardshell and king size mattress!

Ryan (@Offgridding2)  chose the iKamper as a way to support his wellbeing.

“As a military veteran, I seek therapy from the wilderness as an escape. Being outdoors allows me to re-center myself. The iKamper certainly gets me comfortable while being in that environment.”

Fred and Amanda (@Burnt_trekky) are exploring the Oregon coast in their Crosstrek and iKamper. (The awesome featured image up top is theirs!)

They chose to go for the iKamper because they wanted to find a high-quality hard-shell roof tent for their adventures.

“We decided to go for the iKamper mini. Since it’s smaller than most hard-shell tents, it was a perfect fit for us. It has the Aerodynamics of a hard shell and all the space of a soft-shell tent.”

Nick (@quikexpedition) was looking for a top-quality rooftop tent. He chose the iKamper because of its reputation and because it was a perfect fit for his truck bed. 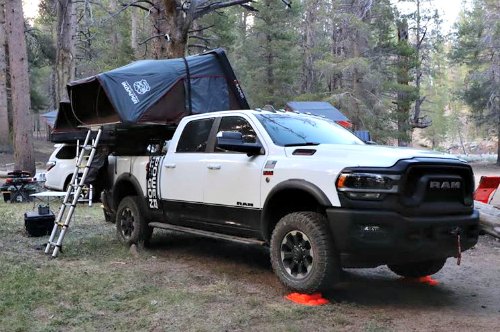 What are your favorite things about the iKamper?

Igor’s favorite thing about the iKamper is the comfort level! His quality of sleep is much better now that his family has the iKamper, and he said the rooftop tent gives him and his family a much better sense of safety and privacy. Especially in bear country.

What’s more, being raised off the ground can make weather conditions much more bearable, both in the dry season and the rainy times.

“In a hot California climate, it’s better to sleep above the ground because during the day the ground accumulates so much heat so it works like a heater at night.”

Ben particularly loves the easy setup and pack down and says that the overall quality has been outstanding. He loves the fact that he can get an additional living space with the Annex add on. 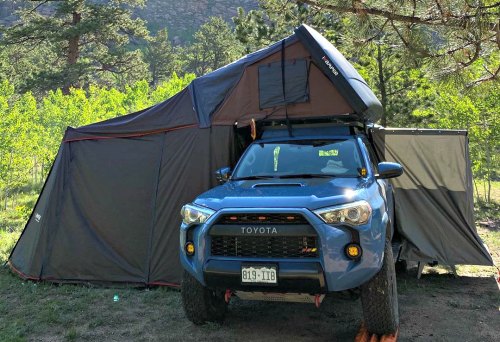 Ryan comes at the iKamper from more of a lifestyle perspective. Getting out in the iKamper gives him a priceless sense of freedom.

“The iKamper allows me to feel free of boundaries in such a limiting society. The inspiration of its designer, Soon Park, is one which I fully support and am glad to invest in.”

He highly rates the quality too.

Fred and Amanda told me that the iKamper fits perfectly on their Crosstrek, and doesn’t reduce their gas mileage as much due to its low profile.

They love how easy it is to set up and put away, giving them more time and energy to focus on one another, as well as the gorgeous landscapes that they are exploring. They appreciate all the little details too!

“The quilted world map is such a nice bonus; it speaks to the quality of the tent.”

Nick’s favorite thing is the ease of set up and take down. He agrees with Fred and Amanda about the aerodynamics of the hard-shell cover too!

What could be improved about the iKamper?

Igor couldn’t fault the design or quality of the iKamper itself. However, he thinks they could make some improvements to their customer support to keep the tent in top shape over time.

“I’ve had my tent for more than 2 years! It is a first-generation, so some parts are already worn out. iKamper should add the canvas to the website as an available product. Currently, if you need to replace the canvas, you have to place a custom order with customer support.”

Ben would like to have more storage options inside the tent, as well as better options for running power and lights. He would also love the hard shell to be more symmetrical so you could have more flexibility when it comes to mounting.

Ryan agrees that some LED lighting would improve the experience.

He plans to add solar panels to the top of the hard-shell in the future, to offer additional power when he is off-grid. He also thinks that the iKamper would be improved by having a condensation mat below the mattress as standard. 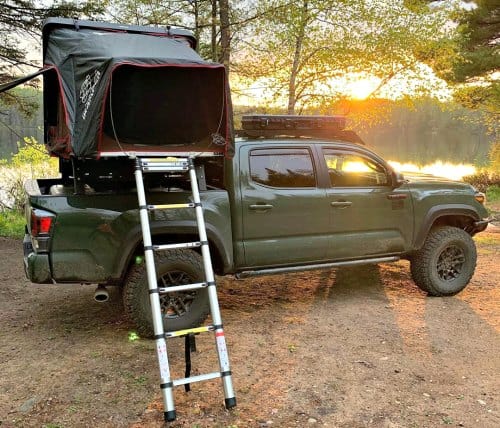 Fred and Amanda agree with Ryan when it comes to the condensation mat.

“It isn’t a deal-breaker, but you will find condensation under the mattress when you wake up. If there was a condensation mat, that would make it better. To be fair, every tent has condensation so it is not too bad, you just have to make sure you air it out.”

Nick didn’t have any serious condensation problems, but he did think that the pack down process could be improved.

“I’d love to see an innovative way to manage the straps used for closing the Skycamp, rather than just wod them up and stuff them inside before fully closing.”

Do you feel your iKamper was worth the money you spent?

Igor thinks it was worth every cent.

“It’s a sort of investment. It gives me the feeling of owning an RV but with serious off-road capabilities.”

He goes camping with his family of 4, and the memories he has built with his children are priceless. 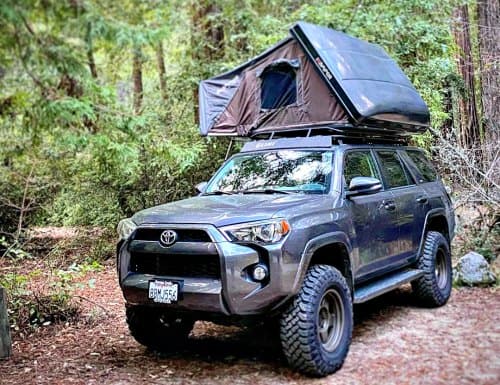 “You can see and feel the quality during every trip and good night’s sleep!”

He thinks the quality and design of this roof top tent are the best on the market. It’s not just the tent itself he rates, but all the added features from locks, to ladder, to mattress. However, he points out that there are some cheaper versions for people working to a tighter budget.

“Hills Off-road Gear has this in their version of the iKamper mini at a lesser cost. H.O.G. also includes a vestibule, and interior lighting so if you want to save some money and don’t mind supporting a company that sort of copied iKamper’s design then that is a great alternative to iKamper. Rhino Adventure Gear offers a kit for the iKamper hard shell.”

Fred and Amanda would definitely buy an iKamper again.

“We are a family that camps often (every week), so for us, it’s definitely worth every penny.” 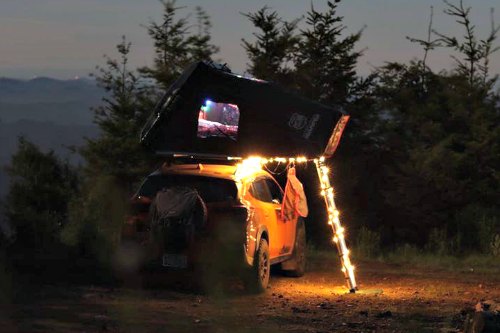 Nick is yet another happy camper.

“My old rooftop rent was a game-changer from a ground tent but was still not the easiest to takedown. I’d show people pictures of it because didn’t want to go through the process of opening and closing it. In the short time that I’ve had the Skycamp, I’ve probably opened and closed it more times just showing people than I ever did my previous tent, just because it’s so easy.”

The latest iKamper model is the Skycamp 2.0

There are a few different models of IKamper to consider. These include the iKamper mini, the X-cover, and the 2 or 4-person version of the Skycamp.

It came out in 2019, and is a new and improved version of their original Skycamp model. The tent now takes only 60 seconds to set up, and they made the sleeping pad 50% thicker for an even comfier night’s sleep.

Features of the iKamper Skycamp 2.0 include:

How much does the iKamper actually cost?

The price of the iKamper depends on the model you chose to go for, but it is going to set you back over $3,000 as a minimum!

Although the brand is certainly high end, the owners I spoke to all said it was worth the price. What’s more, iKamper has partnered with a financing company, Bread, to make longer-term payment options possible.

You can find out more about this on the iKamper website.

I reached out to many different IKamper owners, but I genuinely couldn’t find a single one of them with major complaints!

The iKamper is a really wonderful, really expensive rooftop tent. If you can afford it, then I do not hesitate to recommend it to you. However, the cost of technology should never interfere with our ability to get out into the great outdoors. If you can’t afford the iKamper, rest assured that there are plenty of other decent quality options that can get you into nature for a less intimidating price.

Up Next In Roof Top Tents:

What is the Largest Roof Top Tent?

How do you Make a Roof Top Tent? (9 Clever DIY Builds)