If you are looking for a 14er to climb in Colorado, Longs Peak is most likely near the top of your list. With the top question in your mind being – How difficult is the Longs Peak climb?

To quickly answer – The risk factors that make Longs Peak hard to climb are often incorrectly perceived. The worst danger lies not in the exposure, length, or weather. Rather, it is human error that is the greatest risk one faces on Longs: overpopulation, under-preparedness, and overconfidence are the real problems that one needs to look out for when climbing the mountain, in both themselves and other people.

Longs Peak is so quintessential to Colorado that it is the image etched into the Colorado quarter, meant to symbolize everything that the state represents. I am sure that when the artist decided to depict Longs on the quarter, they were imagining that Longs represents the beauty of our Centennial State and the adventurous spirit of its residents.

However, for many people, when they hear the name “Longs Peak”, they immediately think of death and disaster. Why has Longs come to represent danger for so many people, and is that sentiment justified?

In order to find out, we must explore the perceived risk of climbing Longs versus the actual risks that one faces when up on the mountain.

What do I mean by this? Well, whenever one embarks on an outdoor expedition, whether it be a simple day hike or a two week rafting trip through the Grand Canyon, there will always be aspects of the trip that one perceives to be the most dangerous, but actually aren’t very dangerous at all. Let’s use rock climbing as an example.

The first time someone steps into a harness and is tied to a rope that is meant to support their life, their heart rate will most likely rise because they are experiencing the fear of falling. They naturally don’t trust the gear, because they have never used something like it before.

However, despite how scared they may be of their rope breaking and their body plummeting to the ground, the likelihood that their gear will fail them and they will actually fall is extremely low. Like, almost impossible. Therefore, falling while top roping is a perceived risk. On the other hand, what are the actual risks of rock climbing? Perhaps the most prominent risk is human error.

While a rope is highly unlikely to break, a human tying a knot incorrectly, putting on a harness wrong, incorrectly setting up anchors, or climbing on weak rock are all much more likely. These are actual risks, but often we are less likely to think of them because we can become fixated on perceived risks.

What People Tend to be Afraid of on Longs Peak

Those who are hesitant to climb Longs and those who injure themselves or die on Longs are actually extremely similar in that they both tend to fixate on the perceived risk of ascending the mountain while ignoring the actual risk.

On Longs, there are many exposed and steep sections that people obsess over because they are afraid of heights and think that they will fall off of the mountain. For example, one of my friends and Colorado native recently told me he would never climb Longs because he was afraid of the Narrows section.

The Narrows section is an exposed ledge that occurs around 6.5 miles into the hike. Once you are on the narrows, you will be completely exposed on the south side with a drop below you that could make anyone feel light headed. However, in spite of the Narrows’ reputation, it is actually a straightforward traverse across a ledge that is at least 5 feet wide, with plenty of hand holds and some rock protection on the exposed side.

When approaching the Narrows (or the Ledges, which is another exposed section) remember to keep your head about you. Take deep breaths, focus on your steps, and remind yourself that you control your footwork and that you are safe. If you can do this, then suddenly the risk of falling won’t feel like that much of a threat anymore.

Another perceived risk of hiking Longs is that one will accidentally go the wrong way. Longs is a class 3 fourteener, and oftentimes there are no trails leading to the top of class 3 fourteeners. Therefore, they normally involve copious amounts of rock scrambling and route finding. Going the wrong way for a short amount of time is a rule rather than an exception when one gets into more difficult mountain climbing.

However, Longs is no ordinary class 3 fourteener. For the first six miles, there is a clear, dirt trail that leads you directly to the boulder field just before the Keyhole. From the Keyhole, you only have a mile left of scrambling before you reach the top. Although there is no trail through the rocks, the entire route contains very obvious yellow and orange bullseyes that will direct you towards the safest and fastest route to the top.

Honestly, you would have to be completely oblivious to get lost on Longs. 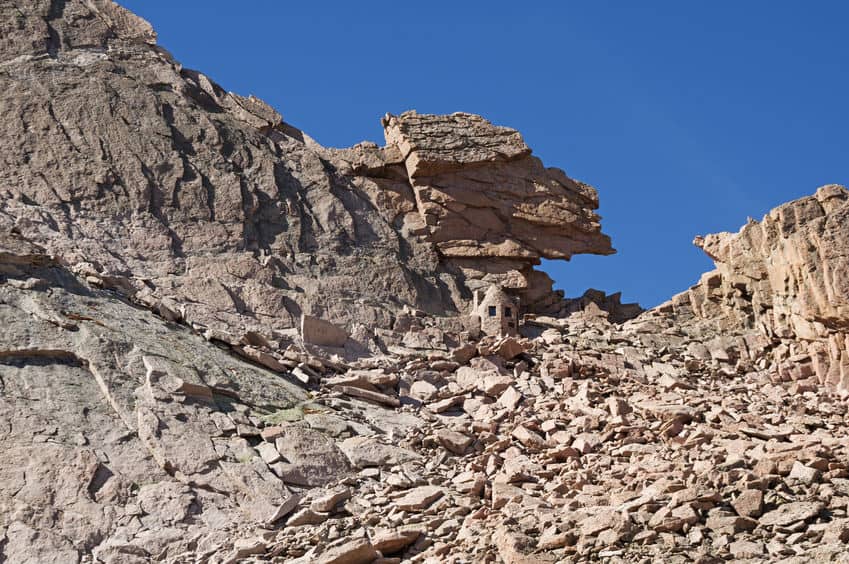 What People Actually Need to Be Aware of on Longs Peak

In spite of the fact that many people end up worrying about problems on Longs that most likely won’t lead to their death, there have been many deaths on Longs. In fact, as of January 2018, 67 deaths have been recorded on Longs Peak, according to data collected by Rocky Mountain National Park.

If you are trying to stay safe while up on the most popular and deadly fourteener in Colorado, the essential question to ask is: What is the cause of these deaths?

Many of the deaths are the result of falling, lightning, hypothermia, and exhaustion. Upon reading this, it can be easy to blame the deaths on perceived risk: heights (of course), weather, and length of the route. However, this puts the blame on external forces, when, in fact, the cause of human death is just that: it is most often human error.

I would like to make the argument that death occurs on Longs Peak due to overpopulation, under preparedness, and overconfidence. These are the real risks of the mountain. The factors are human, they are internal. Let us explore this concept.

People are falling off Longs Peak. But why are they falling? Perhaps because they are fatigued, meaning that they weren’t properly prepared for the fourteen mile hike to begin with. Or, maybe they got blown off of the mountain due to extreme winds (yes, this does happen). That means that they either didn’t read the weather report (under prepared) or they continued to try to summit in spite of what the weather was saying to them: TURN AROUND (overconfidence).

People are dying from lightning and hypothermia. These factors seem to be completely external. And yet, they are totally preventable. An under prepared or overconfident person doesn’t look at the weather report the night before and the morning of. They also are unwilling to turn back, even though a giant storm cloud is looming in the distance or the wind is literally bowling them over.

This stubbornness is cause for consequence, and all of it comes to a head when the mountain is overpopulated and the route gets bottlenecked. A crowded mountain alongside weather continually increasing is a dangerous situation.

I want to make it clear that I am not saying everyone who has died on Longs was there during an overpopulated situation, under prepared, or overconfident. There are freak accidents that occur all the time in the outdoors. However, the fact that deaths on Longs have become way too common is no accident. Longs isn’t the cursed fourteener, or something like that. There has to be a pattern to the deaths, and the most logical answer is human behavior.

So You Want to Climb Longs…

Don’t climb a mountain unless you are ready. If you are ready, that means you are overcoming the three main problems of overpopulation, under preparedness, and overconfidence. How do you ready yourself to overcome these human faults, you ask?

This one is easy. All you need to do is climb Longs on a weekday or in late fall. Always, always, always get up early to hike Longs. I like to camp nearby and wake up by 2 am in order to avoid the crowds on the way up. If you manage this, you are way more likely to mitigate the danger of a cluster on the mountain, which could lead to a dangerous situation.

There are so many factors that go into preparing oneself for a mountain like Longs. Here is what you need to do to go into the mountain with stability:

Train for the hike. Longs is, well, long. The fourteen miles can feel like a lot, especially when rock scrambling is involved near the summit. Make sure that you are not only used to the mileage, but also the altitude. It is a good idea to do some easier fourteeners (like Grays and Torreys) before trying Longs.

Check the weather daily, up to a week before you climb and the morning of. Look for patterns in the current weather and changes in the weather predictions. The day of, make sure you are observing the temperature, and watching the horizon for dark storm clouds.

Be ready to wake up early the morning of the climb. I generally try to camp near the mountain and wake up around 2 AM, so I am on trail around 3-3:30 am. This ensures that I am beating crowds and getting up to the summit before noon, which is a general rule of thumb when climbing fourteeners in order to avoid lightning storms.

Pack the appropriate gear in order to avoid hypothermia, exhaustion, and injury. This is what you need to bring: 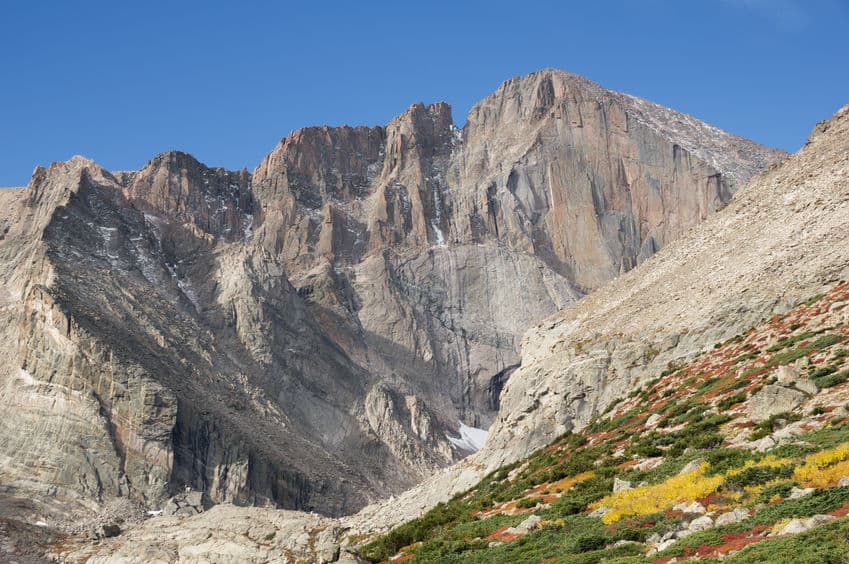 One of the most dangerous things a person can carry with them on a mountain is overconfidence. It arguably leads to the largest amount of human error and consequential death in the outdoor industry. Make sure you know what you are doing, prepare for the worst, and most importantly: be ready to turn around.

Your goal should not be to summit, it should be to have a rewarding experience and simultaneously stay safe. If, for any reason, something indicates that you should turn around, you need to do so. If the weather starts to go south, if you get injured, if it gets too late in the day, if there are too many people, or if you can’t find the route, turn around.

If you have a bad feeling in your stomach that you can’t shake, turn around. When you are in the mountains, it is better to be safe than sorry. Your ego is not worth your life.

In Conclusion – Longs Peak is a Colorado classic. It is totally worth the trek. However, too many people do Longs without having any clue what they are doing, and they end up experiencing irrational fear while not preparing properly for that which can actually cause them harm. When you face Longs, whether it is for the first time for the hundredth time, be sure to avoid the crowds, come prepared, and check yourself before you wreck yourself.