So, you want to hike the Appalachian Trail? Or wait, is it the Pacific Crest Trail? Both trails have their tall tales, making it tricky to know which one is more difficult. Is the PCT harder than the AT, or is it the other way around?

First off, here is what these two trails have in common: They are long. They bring their own set of challenges. Both are very popular if you’re hiking northbound and solitary if you’re hiking southbound. And that is basically where their similarities end.

One important thing to note is this: Hiking the length of the country is never easy. Regardless of which trail you choose to thru-hike first, both trails are difficult and will deliver their own challenges. Plenty of people quit their thru-hikes on both the AT and PCT. Why? Because they are both difficult endeavors that you can only truly prepare for by actually hiking them.

Here are a few things you should consider when trying to decide which trail is best for you and which trail might be more difficult.

The AT stretches along the eastern United States from Georgia to Maine, going through 14 states. It’s approximately 2,189 miles long, give or take. The Pacific Crest Trail goes through three states – California, Oregon, Washington – and is close to 2,660 miles long. Both are very, very, very long.

The AT on average takes anywhere from 4 to 6 months to thru-hike. The PCT typically takes 3 to 5 months. Despite those time periods somewhat overlapping, your experience during those months on the AT will probably be more physically demanding than the PCT. Why? See below.

The AT has a tendency to skirt its way around mountain summits, taking a million switchbacks to get there. The PCT goes straight up to that summit. You will very likely hike more miles per day on the PCT than the AT. How many? By the time most thru-hikers have gotten their trail legs, they are hiking around 15 to 22 miles per day on the AT.

Sometimes more, but sometimes less than even 15 miles, because New Hampshire and Maine deliver some gnarly hiking. On the PCT it’s usually around 20 to 25 miles per day. It’s also not uncommon on this trail to hear of thru-hikers hiking 30+ miles. But anyone who has hiked both of these trails will tell you that one mile on the AT is significantly more difficult than one mile on the PCT.

Leading to the next topic: Terrain.

The AT is rocky. The PCT is a roller coaster. The AT is rugged. The PCT is cruisey. I thru-hiked the PCT in 2015 and the AT in 2013 and I can say from personal experience, the PCT was significantly easier on my body. The AT has points along the trail where you are using your hands to hike up rocks, where trekking poles serve zero purpose.

My joints were throbbing on the AT. The trail on the PCT is mainly just dirt with minimal rocks. It’s much more comfortable physically.

If you’re used to rugged terrain or you just prefer it, then you will probably love the terrain on the AT. But if when you read the words “rugged” and “rocky” you aren’t sure what to picture in your mind…then you might be in for a real surprise of what hiking can be like out east.

Are you the type of hiker who loves to be rewarded with a view at the end of each climb? If so, the PCT might have your name on it. Most of the PCT is completely open so you’re seeing beautiful views of the valley below your entire day. The views and scenery on the PCT are bliss.

The AT, on the other hand, is a little different when it comes to views. You are primarily hiking under tree coverage. This changes towards the end of the trail, but don’t expect to get summit views after every climb.

Black bears. Mountain lions. Rattlesnakes. These are all on the PCT and you’ll probably see one of the three, if not all three. The AT has more black bears than you can count (seriously, you’ll stop counting after a while). I’ve woken up in the middle of the night on both trails to the sound of a black bear stomping around my tent.

The AT also tends to have a tick issue. Not to say the PCT doesn’t have ticks, but…the wet climate out east makes for a breeding zone for ticks. If you thru-hike the AT, you’ll be including some type of tick repellent in your gear list. 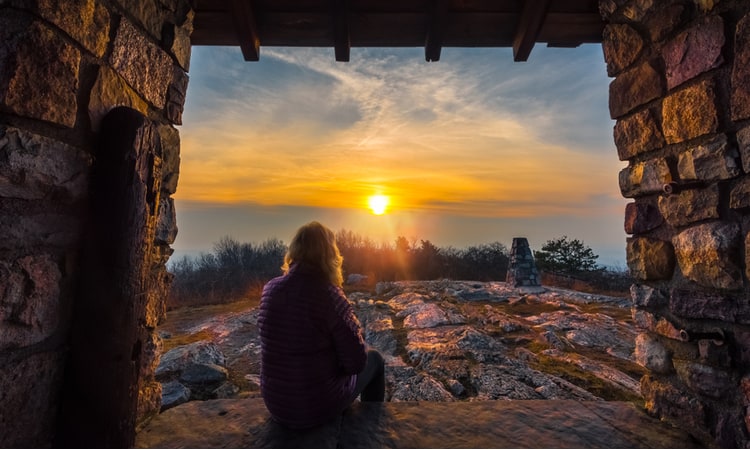 Watching the sunset on the Appalachian Trail in Stokes State Forest, New Jersey

When I thru-hiked the AT, it rained A LOT. And I mean, multiple days per week, back-to-back-to-back. At times it seemed to never end. And the rain is relentless when it pours down, raining for hours and hours. Luckily, there are road crossings pretty frequently on the AT, so you can almost always stick out the cold, wet weather for a day and find yourself in a warm motel room that night.

Also read: How to Waterproof a Hiking Backpack: The Complete Guide

The PCT? Not so much. It’s wilderness out there. And not the “100-mile wilderness” in Maine on that AT. You are actually out there for days without seeing a road. The weather on the PCT depends greatly on which state you are in – You could get rained on in Washington every single day. You could hike the entire PCT without ever seeing any rain.

Or, you could get hailed on in the Mojave desert with 60 mph winds. Hint: Do not be that person who sends home your rain gear in the desert.

While rain isn’t so much of an issue on the PCT, the heat in the desert can be. Those first 700 miles might very well give you 100+ degree heat, with no shade. It is no joke out there.

Because it’s in the west (hence, dry terrain), the PCT often has wildfires nearby or on the trail, which then ultimately closes sections of the trail. On this trail, you have to be willing to keep an open mind about your hike and let go of trying to control mother nature. There might be times when a fire closes a trail and you’re forced to skip a section.

That’s not to say the AT never has trail closures – it has due to hurricanes and flooding – but it’s not nearly as common as on the PCT.

Both trails are gaining more popularity each year. In 2018, the Pacific Crest Trail Association issued almost 5,000 thru-hiking permits and the Appalachian Trail Conservancy reported more than 4,000 people attempted a thru-hike.

In my personal experience, the AT has a pretty strong party culture in the early parts of the trail. This might be in part because the AT crosses a lot of roads. This means a few things: It means you will probably encounter people “drifting” along the trail since many sections of it are accessible via car.

It also means don’t be surprised if you show up to a campsite in those first few weeks on the AT and there are more than 20 thru-hikers setting up camp. Eventually, on both trails, the less-committed hikers will fade away.

During both my thru-hikes, practically everyone was very friendly and there was a strong sense of community.

The work that goes into a long trail means more than just the time spent actually on that trail thru-hiking. Resupply boxes are not necessary for the AT – meaning, you can buy food along the trail rather than shipping it ahead to yourself.

To answer the question, is the PCT harder than the AT? Short answer, no. But like with so many things, what it really comes down to is how you choose to see it. It comes down to your outlook. In my experience, I found the AT to be significantly more physically challenging, primarily because of the reasons listed above.

Yet despite this, my hardest days ever on trail were actually on the PCT, even though hiking along that trail was much easier for me than the AT. Why? One word: Mindset.

Is Hiking Alone Safe? The Complete Guide For A Solo Hike

The pct has the switchbacks. The at goes straight up anything in front of you.

"The AT has a tendency to skirt its way around mountain summits, taking a million switchbacks to get there. The PCT goes straight up to that summit. You will very likely hike more miles per day on the PCT than the AT. How many? By the time most thru-hikers have gotten their trail legs, they are hiking around 15 to 22 miles per day on the AT. "