Before we got married, my husband and I always knew wanted to take time off to travel the United States. Our relationship started after backpacking the Grand Canyon, and we have shared a passion for the outdoors since. After our son was born, we started reflecting where we were at in our lives. Michigan was not where we wanted to live forever, and we did not love ours jobs.

Since my son would eventually start school we knew that we had limited time to find where we would permanently live. The main problem is we only have ideas of where we would like to end up. After much debate, we decided if we were going to quit our jobs and travel that we should in the next few years. While on the road we can take advantage of our time and try to figure out  where we want to live.

Before we could do anything, we had to remember that living on the road was not free. We still had bills to pay, buy groceries, pay for gas, and be ready for unexpected expenses (like if our car broke down or we had a medical emergency).

Not only did we have to take in account of our everyday expenses and bills, we had to consider the time and money it would take for us to find a job and a place after our trip. We evaluated our bank accounts and realized in 9 months we would have enough money to be unemployed for a year with a couple months room to settle down.

There are many options for campers out there. Some cost as much as a home! We wanted to purchase a vehicle/home that fit our budget but also fit our needs for the trip. At most we would spend a year in our new home, so we didn’t need to spend an outrageous amount on a huge RV.

My husband and I evaluated where we would be going and what we wanted to explore. Our vehicle needed to give us access to remote areas and trail heads. Four wheel drive and the ability to offload was a necessity. This meant that the camper vans and trailers were out. We started to focus on vehicles that had four wheel drive and were reliable.

After much research we ended up choosing a 1996 F350 with 7.3L Power Stroke diesel. Not only was this affordable, but it has a crew cab and long bed so we had enough space.  The engine is reliable and can run 500,000 miles if properly maintained. The F350 is also a heavy duty vehicle that can handle carrying a truck camper constantly without effecting fuel efficiency. 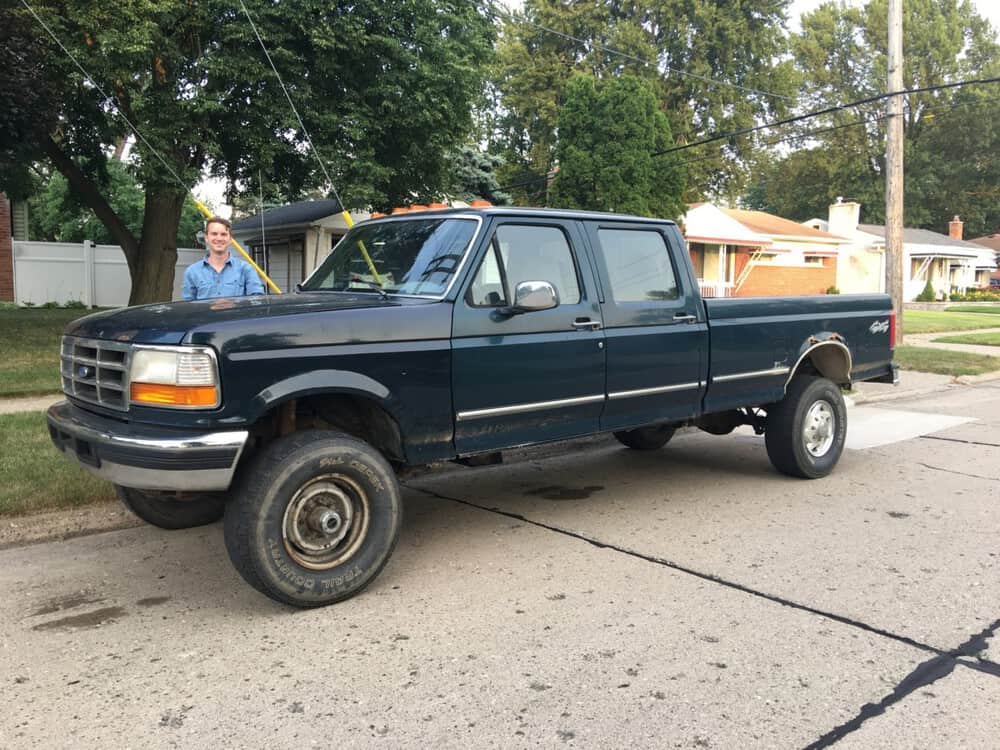 We were able to purchase the F350 for $3,600.00. The truck was previously owned by a diesel mechanic, so it was in good shape besides the usual rust (which is common in the Midwest due to snow and salt).

Subsequently we were able to look for a camper that would go into the bed of the truck. We ended up 1997 Palomino B1200 pop-up camper for $1800.00. We wanted the pop-up because it was lighter weight, had a lower center of gravity, and better clearance. All those points are good for off roading and fuel efficiency.

Other Affordable Overland Vehicles We Considered

The Ford Excursion was another option we considered. They are as long and wide as a F350 but in SUV form. The problem was we would have to convert the back into a living space, there is no head space, and less storage. The fuel efficiency would have been about the same as the F350 with a pop-up camper in the bed. There was no sizable advantage to going with the Excursion.

Another option were smaller cars with a trailer. The problem that we kept running into was not being able to off road. Also puling a camper is less fuel efficient. Altogether the car and trailer would be a longer rig which would have been more difficult to maneuver.

The van conversion, you would have build out yourself and we did not want to get stuck with a bunch of expenses. Most are not four wheel drive so it would be costly to convert it. Typically the vans are not reliable either.

All in all we were able to make an affordable purchase by only spending $5,400.00 on the truck and pop-up truck camper. The main reason why we kept our costs down because we bought a used camper and truck. Minimal work would need to be done on both so that they would be more updated and fit our needs for while we lived on the road.

We made some small upgrades and changes to our truck and truck camper. First off, the camper had a broken table and old cushions. I was able to recover the cushions for $32.00 and replace the dinette for $20.00. Knowing that we would eventually be living in the camper for a year, we purchased items to maximize our storage. The modifications were inexpensive and improved the aesthetics.

Knowing that we would be in off grid and in remote areas, we wanted some sort of power source for items like the furnace to run. We added 200 amp hours of deep cycle batteries, 325 watts of solar panels, and a solar charge controller. 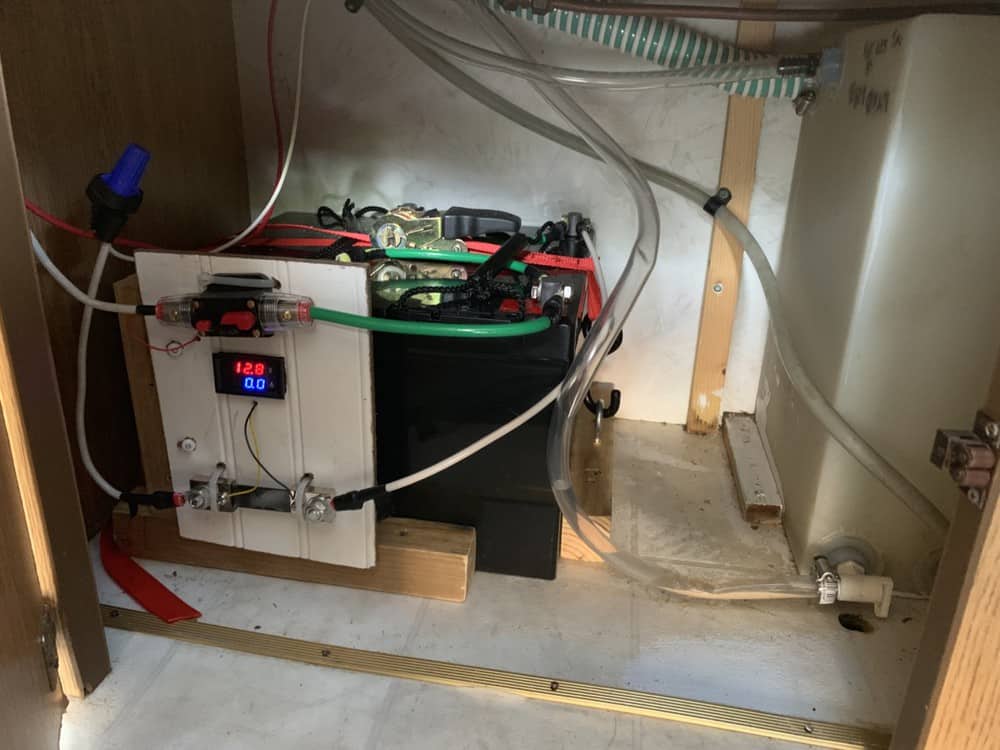 We chose solar panels over a generator because of space, noise, the requirement to carry around gasoline, and price. Power would be needed mainly for the furnace, lights, and overhead vent fan. Generally we could run all those for two days without any sun. Except you usually would not run the fan at the same time of the year as the furnace. Really, we do not need a huge power source that generators provide.

When it came to the solar panel, there are a lot of options to buy kits. Instead we built our own set up. This involved buying a panel, cabling, connectors, circuit breakers, fuses, solar charge controllers all separately. Creating our own kit allowed us to save $300 in solar panels because we purchased one commercial solar panel instead of three small 100 watt panels.. There are many resources online on how to put it all together.

Other than those upgrades and changes, we really just had to re-caulk and seal some areas of the truck camper’s exterior to prevent leaks. We purchased new all terrain tires. The changes we made were affordable and allowed us to still stay in our budget for our vehicle/home. 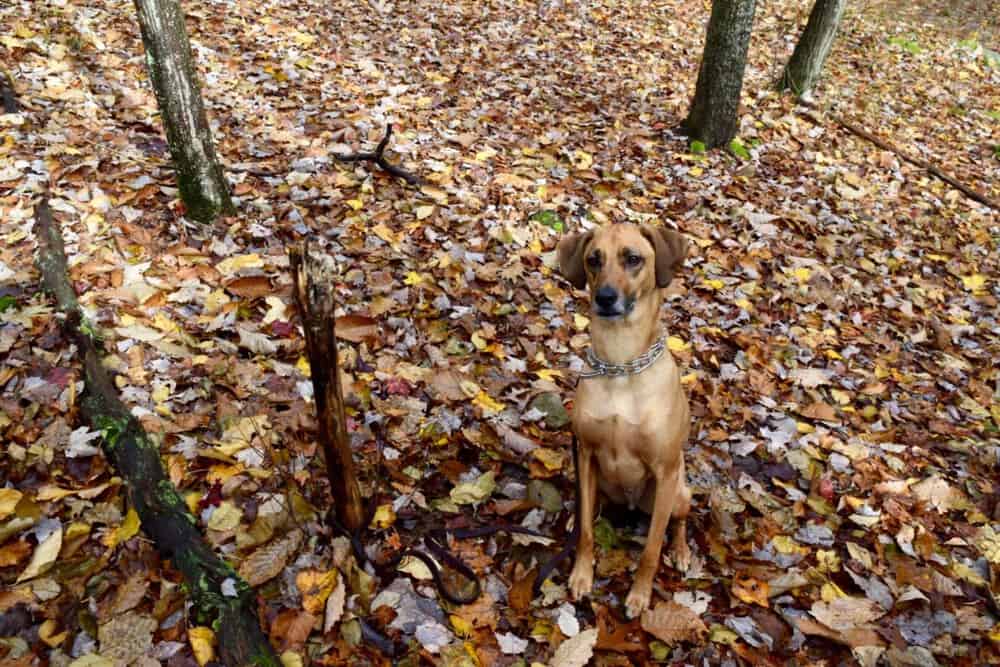 Not only would it be my husband and I, but our dog and son would be joining us on this year long adventure. If it were just us two, we would have backpacked and lived out of a car. We knew that with a child we would need more space.

We have taken smaller trips as trial runs for our year in the camper and realized quickly that the weather sometimes forces you to spend long days in the camper. Activities and space dedicated for my son are essential. The refrigerator has a chalkboard covering, and there is a nook to store books and toys. We have gone on trips more recently, and this has helped out tremendously.

As for our dog, we put in the vent fan mainly for him. Some of the areas we plan to visit will be hot, and we needed some sort of cooling system so he/we did not get overheated and dehydrated. 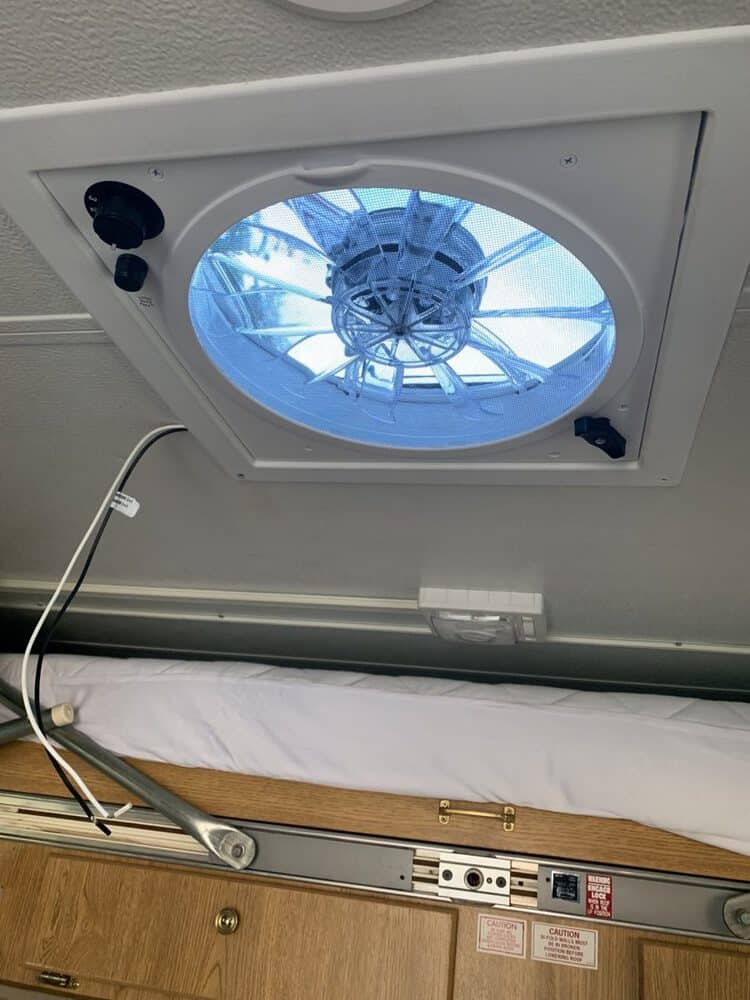 Most of our time will hopefully be spent outdoors, so we just need a place to shield us from unfortunate weather and a bed to sleep in. So far our setup has worked really well on our weekend and week long trips. As we have gone out, we have come back and made adjustments. We realized that being on the road requires flexibility.

So, where do we plan to go for a year?

We set off in September 2019 and decided we should stay near the Midwest until Christmas (or the family will be disappointed). First we head to the Virginias, Carolinas, and everywhere else south of Indiana.

After Christmas we are going to follow the weather. We will head to the Southwest of the United States and make our way up through Utah, Colorado, Nevada, Idaho, and Montana as the weather starts to warm up. Then we will make our way back  south through Washington, Oregon, and California.

We have many stops and points of interests, like national parks and state parks, that we plan to see. Our main goal is to take our time. With work, we have been rushed in the past by only spending a week at destinations like Zion, Tahoe, Yellowstone, and the cities/towns that surround them. A google map is ready to go with  all the points of interests, towns, restaurants, breweries, etc that we would like to visit. We will never have an excuse of not knowing what to do.

Along the way we hope to find an area that  we can eventually call home. We want to live somewhere we can spend our days off work outdoors without having to fly across the county to our favorite destinations. By taking our time, and travelling the United States we believe we will find the right home for us.

Our 1996 F350 and 1997 Palomino Pop-up truck camper is allowing us to affordably turn our dream into reality. Yeah, pitching a tent would be a lot more affordable but the choices that we have made fit into our budget and are reliable.

Related content: How Much Does a Bus Conversion Cost?

Maddie- you and your hubby are my new hero’s. Best of luck this coming year and be sure to keep us all posted. Some day Theo and my great Elliot need to meet—-same age and both adorable!!