Henry David Thoreau is one of the most iconic American essayists, philosophers, and poets. Born in 1817 in Concord, Massachusetts, Thoreau was a Transcendentalist, and focused much of his writing on human relationships with ourselves, nature, society, and the universe itself. His two most famous works are his book Walden, and his essay, “Civil Disobedience.”

Some of Thoreau’s writings have become staple sayings and quotes in modern culture. Many have spoken his most famous line, without realizing they were quoting Thoreau. His words have transcended time, and have immortalized his passions and beliefs.

Thoreau’s words still resonate with humans today as they did for the man who sat at the edge of a pond, contemplating the mere act of living.

Below are a list of 25 of Thoreau’s greatest quotes:

1. “If a man does not keep pace with his companions, perhaps it is because he hears a different drummer. Let him step to the music which he hears, however measured or far away.”

2. “Rather than love, than money, than fame, give me truth.”

3. “Not till we are lost, in other words not till we have lost the world, do we begin to find ourselves, and realize where we are and the infinite extent of our relations.”

4. “How vain it is to sit down to write when you have not stood up to live.”

5. “When it comes time to die, let us not discover that we have never lived.”

6. “I make myself rich by making my wants few.”

8. “You must live in the present, launch yourself on every wave, find your eternity in each moment. Fools stand on their island of opportunities and look toward another land. There is no other land; there is no other life but this.”

10. “We need the tonic of wildness…At the same time that we are earnest to explore and learn all things, we require that all things be mysterious and unexplorable, that land and sea be indefinitely wild, unsurveyed and unfathomed by us because unfathomable. We can never have enough of nature.” 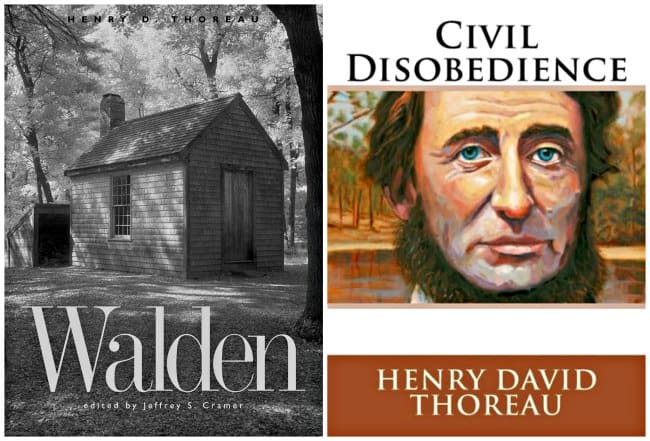 11. “Live in each season as it passes; breathe the air, drink the drink, taste the fruit, and resign yourself to the influence of the earth.”

12. “Heaven is under our feet as well as over our heads.”

14. “A man is rich in proportion to the number of things which he can afford to let alone.”

15. “What is the use of a house if you haven’t got a tolerable planet to put it on?”

16. “This world is but a canvas to our imaginations.”

17. “I went to the woods because I wished to live deliberately, to front only the essential facts of life, and see if I could not learn what it had to teach, and not, when I came to die, discover that I had not lived. I did not wish to live what was not life, living is so dear; nor did I wish to practice resignation, unless it was quite necessary. I wanted to live deep and suck out all the marrow of life, to live so sturdily and Spartan-like as to put to rout all that was not life, to cut a broad swath and shave close, to drive life into a corner, and reduce it to its lowest terms…”

18. “However mean your life is, meet it and live it; do not shun it and call it hard names. It is not so bad as you are. It looks poorest when you are richest. The fault-finder will find faults even in paradise. Love your life, poor as it is. You may perhaps have some pleasant, thrilling, glorious hours, even in a poorhouse. The setting sun is reflected from the windows of the almshouse as brightly as from the rich man’s abode; the snow melts before its door as early in the spring. I do not see but a quiet mind may live as contentedly there, and have as cheering thoughts, as in a palace.”

19. “I can alter my life by altering my attitude. He who would have nothing to do with thorns must never attempt to gather flowers.”

21. “If a man walks in the woods for love of them half of each day, he is in danger of being regarded as a loafer. But if he spends his days as a speculator, shearing off those woods and making the earth bald before her time, he is deemed an industrious and enterprising citizen.”

22. “The greatest compliment that was ever paid me was when one asked me what I thought, and attended to my answer.”

23. “If the day and the night are such that you greet them with joy, and life emits a fragrance like flowers and sweet-scented herbs, is more elastic, more starry, more immortal,—that is your success.”

24. “The true harvest of my life is intangible – a little star dust caught, a portion of the rainbow I have clutched.”

25. “Go confidently in the direction of your dreams. Live the life you have imagined.”

The above quotes are 25 of the most influential and famous Thoreau quotes. However, one of, if not the most, well known and quoted statements, is this:

“The mass of men lead lives of quiet desperation. What is called resignation is confirmed desperation. From the desperate city you go into the desperate country, and have to console yourself with the bravery of minks and muskrats. A stereotyped but unconscious despair is concealed even under what are called the games and amusements of mankind. There is no play in them, for this comes after work. But it is a characteristic of wisdom not to do desperate things.”

So, what does Thoreau mean by “quiet desperation?”

I feel as though it would be rather arrogant to assume I could truly interpret the depth of Thoreau’s statement. To interpret anything is to apply its original truth to the context of our own lives and world views.

The string of inspirations that resonated with Thoreau might never have been plucked in my own life, while the mindset with which I approach my life vastly affects the way in which I understand any human interpretation of life.

Let’s take the phrase “quiet desperation.” Thoreau believes we are all quietly desperate. Desperate for change, for truth, for the raw transformative moments molded from unpredictability and connection. When humans seek this but struggle to find it, they resign themselves to an acceptance.

In essence, they write their resignation letter to life. A letter stating that it is not for them. That since they have not yet experienced this sense of overwhelming movement and power within life’s forces, that they must not be destined to feel it at all. That, perhaps, in the back of their minds, they know that the only solution to escape such desperation rests in boldness.

However, boldness can be terrifying, To throw away the embrace of routine for the adventure of life. It sounds glorious written on paper, but daunting to make into a reality.

Though his words may seem negative, I believe Thoreau’s idea of quiet desperation is quite optimistic.

For if resignation is not truly resignation, but merely a deep longing encased by a doubt of how to pursue it, then we as humans are far more drawn to our true states of being than we give ourselves credit for. Which means that if we allow ourselves to immerse yourself in our natural place of being, in these wild environments, that there is never lost hope for connecting with our true selves.

A desert sunrise, when the golden rays permeate through the dusty ambiance of the unkempt horizon. A ripple on a lake, slowly twirling in place until it gracefully curtsies outward with a controlled chaos. The reflection of a deer’s leg in the eye of a mountain lion, traipsing through terrain familiarized by generations of a similar hunt.

A whisper of wind shifting within a forested canopy, chasing itself from leaf to leaf as though it were a small schoolgirl, giggling from the excitement of a summer day.

These are the moments of stillness, of quietness. They are not weak. In these moments, Thoreau discovered inspiration. It is this quietness where he found creativity, power, and joy. Therefore, to hear that he finds this power of quietness in mankind is reassuring, and a reminder that we are all able to escape a life of quiet desperation, if we simply give ourselves the permission to pursue truth.