The Toyota Tundra is basically the bigger, beefier brother of one of the most popular overlanding vehicles, the Toyota Tacoma. In this article, we’ll weigh some of the pros and cons of the Tundra as well as hear from current Tundra owners.

One of the biggest advantages of Tundras is that they are full-size trucks, so they can hold a lot of people and gear. I talked with Seth of @theoverland5 and as his username aptly implies, he uses his Tundra for overlanding with his family of five.

When I asked how he decided on a Tundra, Seth cited the dependability, capability, and the size of the truck as main factors. He and his family also tow an overland trailer, so the extra horsepower and towing capacity were important pros for them as well.

Eugene of @geek.rig overlands with two kids, so the roominess of the cab as well as the storage capacity of the bed were high on his list of pros, in order to comfortably seat his family and have room for all the winter layers, toys, and so forth that traveling with a family entails.

Also on Eugene’s list of pros was the fact that Tundras come with an off-road suspension from the factory, which meant that he didn’t have to rebuild it right away in order to start overlanding. But, he was also pleased with the number of aftermarket parts available for Tundras, so he had plenty of options for upgrades.

Like Seth, Eugene also cited the dependability of Tundras and Toyota vehicles in general as a big factor in his family’s decision.

Danny of tacorunnertravels.com upgraded to a Tundra from a 4Runner that had an RTT (roof top tent) and a custom interior storage and sleeping platform. He knew that he wanted more space to be able to stand up and be more comfortable living and camping out of his vehicle, so he considered both a Tundra and a Sprinter van. He ultimately chose the Tundra because it could get him places that a Sprinter could not.

A final pro of the Tundra is that, when compared to the ever-popular Tacoma, the price range isn’t all that different. The MSRP range for a 2019 Tacoma is about $25,000 to $45,000, while for a 2019 Tundra it’s about $31,000 to $50,000. However, when it comes to used vehicles, Tacomas are often already modded and marked up significantly due to the high demand and so can be more expensive than Tundras.

The only major con with Tundras is that as a full-size truck, it isn’t the most capable offroad vehicle out there. Some gnarlier offroad trails might not be doable in a Tundra because of the hairpin turns and generally narrow paths. However, Seth explained the trade off well:

“I have owned 4Runners, Jeeps, and some other offroad trucks. While this is not as capable offroad as some of those other vehicles, it fits our need very well. We are willing to sacrifice the hardcore offroad capability for the room, comfort, and power. Most of what we do is considered mild offroading so that isn’t a big issue for us in the Tundra.”

This can make a big difference in yearly fuel costs, and many of the popular modifications can have a detrimental effect on the already not great fuel mileage of the Tundra.

Lastly, while we are still comparing Tundras and Tacomas, the Tacoma is much better suited to offroading and overlanding straight out of the factory, as it includes extra technology like Multi-Terrain Select mode, Crawl Control, and a locking rear differential.

The 2019 Tacoma also has an optional fender-mounted desert air intake, which means the air intake is up higher and out of the dust so the engine can “breathe” more effectively in dusty conditions. The Tundra does not come with this option from the factory, although of course, nearly everything can be upgraded with aftermarket parts.

The possibilities are endless when it comes to customizing Toyota Tundras for overlanding. I asked Seth, Eugene, and Danny to share a little bit about the modifications and accessories they have chosen for their vehicles.

Seth and his family have an awesome blacked out 2010 Tundra, CrewMax Platinum Edition. He mentioned that while a lot of these modifications were for aesthetic purposes, the truck is still quite capable. It has an 8-inch ReadyLift and a 3-inch DayStar Body Lift, with FOX 2.5 Coilover Reservoir Shocks as well as custom ATLAS leaf springs. On the ground, they’ve got Cooper STT Pro tires (38 x 15.5 x 20) on 20 x 12 -44 Fuel Vapor wheels. 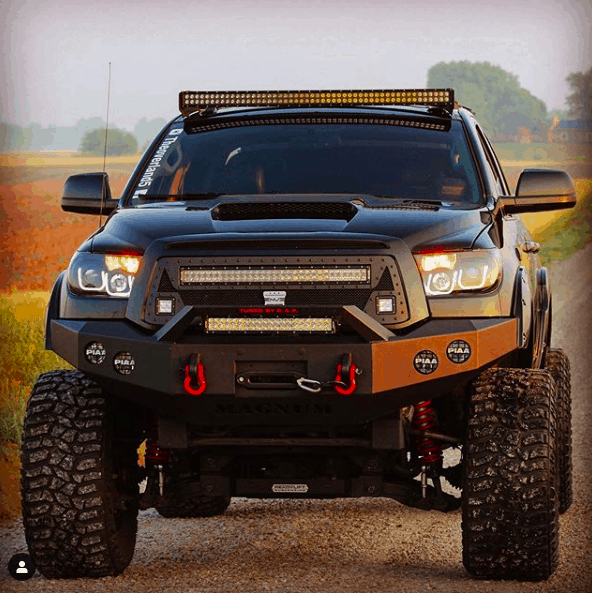 They’ve also got an RK Sport Fiberglass Ram Air Hood, Anzo U-bar Headlights, KC HiLites (M Rack) roof rack with a 50-inch light bar and area lighting, Magnum RT front and rear bumpers, and an Enve Grille with lights and a lightbar. In the back, they’ve added a LEER 100XQ Bed Cap, a Dometic fridge/freezer and drawer system that includes a stove compartment on a bedslide. 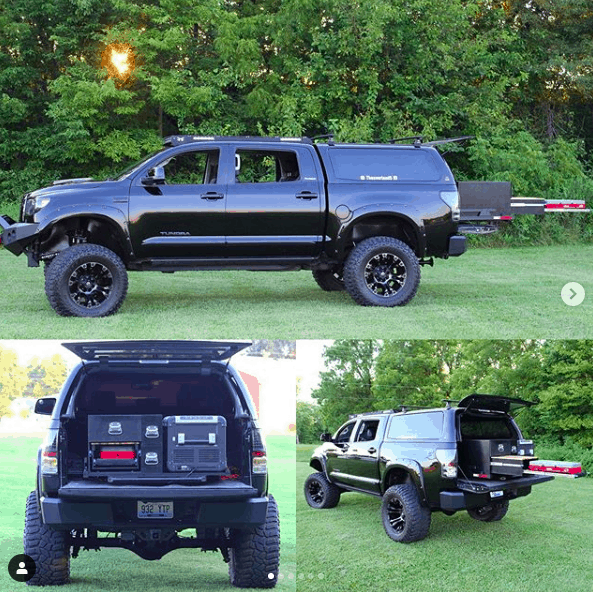 Finally, Seth also has a 1968 M101a1 Overland Trailer that he can tow behind the Tundra for extra hauling space. Naturally, the trailer is just as awesome as the truck, with all kinds of custom elements and upgrades to make it as capable of overlanding as the Tundra. The trailer even has a bike rack on the back!

For an exhaustive list of all the features and modifications of this truck and trailer combo, you can head over to their website, theoverland5.wordpress.com.

Eugene and his family have a 2016 Tundra TRD Pro, and they’ve been through several iterations of the truck setup. Currently, they have an A.R.E. CX HD camper shell, an iKamper roof top tent, and a RhinoRack Pioneer platform over the cab that carries a gas can, recovery panels, a shovel, and some antennas.

The heavy duty camper shell provides security for the truck bed cargo, which includes a custom drawer system and an electric fridge/freezer. In the spirit of “never leave the dogs behind,” Eugene has removed one of the rear passenger seats and replaced it with a dog crate that is permanently mounted.

Eugene added some armor underneath to protect the engine, gas tank, and transfer case, and he also added some rock sliders as well as a winch that’s hidden behind the stock bumper. Since they’ve added quite a bit of weight to the truck, he also had to swap out the rear leaf springs for a heavy duty version. For wheels, he’s running Toyo Open Country AT2 295/70r18.

Danny had some foundational work done to his Tundra by Tactical Application Vehicles (TAV). As Danny says, they turned his truck into an “insane expedition vehicle” that is capable of going anywhere in any types of conditions.

Danny also has C4 armor on the front and back bumpers, which can handle anything that might be thrown at them. He chose these because the quality, aesthetics, and functionality that the C4 team puts into their bumpers are unparalleled, and they look very natural and like they belong on the Tundra.

On the back of his Tundra, Danny has installed a Vagabond Nomad Camper. It weighs nearly 400 pounds and has a sleeping platform that adjusts from 6.5 feet to 9 feet. He says he has slept in this camper in all weather conditions without issues, including torrential rain, hail storms, extreme heat, wind, and dust.

The tent windows have a bug net, clear vinyl, and canvas layers so you can be comfortable in nearly any conditions. Danny says this aluminum-framed camper has performed flawlessly for him, and he can set up his camp in about one and a half minutes.

He also has an Off Grid Engineering dual battery system, so he can run all of his accessories on the secondary battery without having to worry about killing his starter battery. However, if the starter battery is low, he can combine the two batteries to create one large one and get his truck started that way.

He uses this system to power his fridge, camper, and other lights, which include several Baja Designs elements. You can see a full list of his modifications here.

As you can see, there are so many ways that a Tundra can be customized for exactly your needs and preferences. All of these trucks are so unique.

I asked these guys if they had any advice or words of wisdom for those considering purchasing a Tundra for the purpose of overlanding, and here is what they had to say.

“My advice is that you don’t have to have a fancy rig to get out and explore. Start with what you have and go from there. A lot of what we have learned is through trial and error. You can have the best laid plans but until you get off the couch and actually do it, you will never know what fits your needs the best!”

Eugene’s advice is along the same lines: “As I’ve mentioned, we went through several iterations in the configuration of the truck. I think it’s important not to get focused on parts and mods, but just travel more and through experience figure out what’s important for you specifically. Electric fridge might be an awesome trip quality improver for me and my family, but it doesn’t mean it would be of the same value for you.”

Danny hammered this same sentiment home, saying, “There is no vehicle out there that is perfect for you. Your wants and needs will change, they always do. Case in point, my desire to build a sprinter van now for a better living experience. Don’t be discouraged by other people building out these huge vehicles when you can only afford an RTT or basic suspension.

The entire purpose is to get outside and enjoy the outdoors responsibly. There’s going to be plenty of times that you realize you should have done something differently. Grow, adapt and learn to find what works best for YOU!”

If you plan to overland with a family, if you have lots of gear to haul, or if you will be living out of your truck, a Toyota Tundra could be the perfect truck for you. These full-sized beasts can tow, haul campers and big crews, and navigate nearly any obstacle. However, if you plan to navigate narrow trails and extremely rough terrain or if gas mileage is super important to you, you may want to choose a smaller truck.

The Tundra is the oldest full-sized truck on the market, which should give you some peace of mind about the durability and longevity of these trucks.

I truly enjoyed your article. I own a 2017 tundra platinum. I was wondering if you could get Eugene to list where he got his snorkel for his vehicle. I have not had any luck in searching one that would fit my Tundra. Again nice article thanks for writing be safe out there.

I've got the ARB Safari Snorkel. It's a well known brand and fit is perfect.