Runners always say that it’s best to run with a buddy. Forgoing solo runs is not only more fun, but also motivating to push yourself when you may not have felt so inclined to do so alone. There’s strength in numbers, and the numbers don’t necessarily have to be human.

Taking your dog out for a run is beneficial for the both of you. Aside from the obvious health benefits, your dog views you as their world – so any time spent active together is time you and you dog can forge a stronger bond. Letting your dog join you on your lunch break run also allows them (and you!) to let off steam, meaning a much happier pup day in and day out. 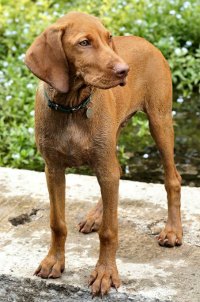 Perhaps one of the most energetic breeds out there, these dogs are for the highly active. They require a minimum of one hour of daily exercise.

If you’re only running 2-3 miles at a time, that won’t be enough exercise for a Vizsla.They’re great for short sprints, longer distances, and can run on pavement and trails (be careful on pavement, especially when the temperature starts to rise).

On a few forums I’ve researched from Vizsla owners, some run their dogs up to 50 miles a week. That’s a fit dog.

One thing I read in my research was that Vizslas may struggle with leash running. Many owners stated they ran their dogs sans leash, opting to only train them in areas that allowed this to happen.

That’s not to say leash running is impossible, rather Vizslas like to control the pace and may not release their boundless energy when leashed. If leash-free runs are not a possibility for you, make sure to take them to a dog park and let them run free. 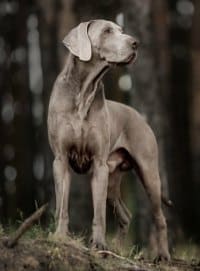 Juggling between going on a short, fast workout for your run or for slogging six miles? Weimaraners are your go-to running buddy here.

They’re known for not only being a ball of energy (one that, much like the Vizsla, requires daily exercise), but also for being able to go on any kind of run with ease.

Their loyalty to you means they may be more inclined to stick by your side as you run together. However, their loyalty may translate to territorial behavior, and they are prone to barking and stubbornness.

Obedience training and socializing will be crucial in their early stages of life. Slacking in this area will result in a difficult dog to run with, no matter how bad they want to be by your side. 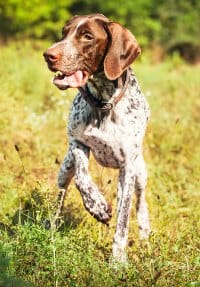 Any hunting dog is a dog worthy of making your running buddy, and German Shorthaired Pointers top this list. Their short coat, build, and vast amounts of energy make them great running partners.

If you don’t know much about hunting dogs, they love to chase after and try to eat small animals. That doesn’t mean GSPs will do such a thing, but their more prone to distractions because of this innate desire.

Proper obedience training and patience will be required so that you avoid having your GSP drag you into a nearby pond because they saw a duck. 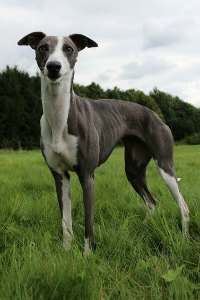 If you’ve ever seen a greyhound and a cheetah, you may have noticed (or not noticed, this detail isn’t typically on anybody’s radar) that their bodies look very similar: a massive ribcage to fit large lungs and a heart, a narrow, lithe body otherwise.

These bodies are built for speed, and Greyhounds are known for their speed.

However, if you’re looking for a buddy to go the distance, a Greyhound will not be the one for you. While they require substantial exercise and regular walks, short sprints are more of their go-to.

I’d still recommend this breed as a running partner– if you’ve been looking to start incorporating hard workouts into your routine, or if you’re looking to no longer be alone, consider a Greyhound! 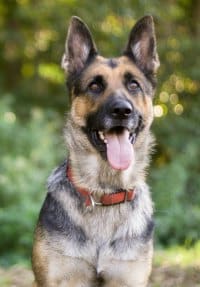 These powerful dogs were originally bred to herd sheep— it’s in their blood to run for long periods of time and for short bursts. Their eagerness to please also contributes to their ability to be your running companion, as long as you’re dedicated to training them consistently.

If you live in a warmer climate, significant runs may not be in the cards for German Shepherds. Their thick coat disallows them to get in those longs runs on a warm day.

Colder climates will suit them better. And always be sure to bring some water and a collapsible bowl on your runs, and take frequent breaks on warmer days for your dog to be able to drink and regulate their temperature. 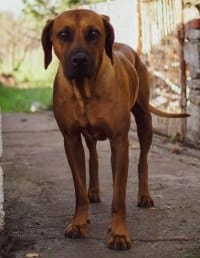 This lesser-known breed was bred to be hunters, much like the GSPs, but they didn’t assist hunters with small foul back in the day– rather, they assisted hunters by chasing lions until the hunter was able to kill them.

They’ve got long-distance running in their DNA.Their short, breathable coats allow them to run in hot temperatures, as well.

Rhodesian Ridgebacks are strong-willed and can be domineering if not properly trained. They’re not recommended for new dog owners, and this strong will may make it difficult for them to behave on a run. With time and dedication, these dogs will make great running buddies for you. 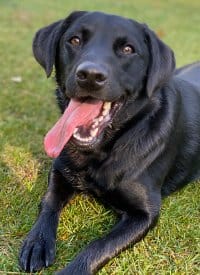 What makes Labs such a popular breed is their friendliness and eagerness to please. They’re perfect family and hunting dogs and are still incredibly active, making them perfect running and all-around companions.

Both the American Labrador and English Labrador are suited toward long distances, despite English labradors’ stockier and more muscular build.

Their playful and curious nature means they may struggle on a leash. In addition to this, they aren’t able to go as far as the dogs listed above, so don’t anticipate taking them along your entire 50-mile training week. 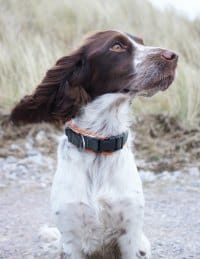 Looking for a smaller running companion? The Brittany is the one for you. Small but rugged, these dogs are perfect for trail runs, as they were bred to retrieve birds for hunters whilst navigating difficult terrain.

Their trainability is akin to a Labrador, and they’re all around great outdoorsy dogs.

The Brittany may be prone to hyper-sensitivity, but as long as you train them and exercise them vigorously for at least one hour a day, they should be okay. 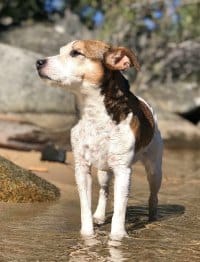 Looking for an even smaller running companion? Yep, you guessed it– Jack Russell Terrier. In spite of their small size, their boundless energy make them the exception in a suitable running companion, according to animal behaviorists.

They’re better suited to shorter, faster runs, and you’ll be glad to take them on such runs– otherwise, they can get feisty.

Jack Russells are known for being crazy. Their hyperactivity and aggression toward dogs and sometimes small children may have owners struggling to be patient, but keeping them on a regular exercise routine and practicing consistent discipline and socializing will generally calm this feisty side down. 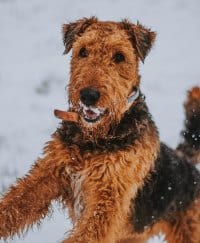 Last but not least, Airedales complete the list as a fun and energetic running companion. Their wirey coats help keep them cooler on warmer days, and they love to run (I know so– my rancher grandparents only owned airedales because they knew they would appreciate the land they owned by running for miles each day!).

An Airedale’s high energy can lend to mischief. Leash running will be tough in the beginning, and these dogs cannot run much longer than six miles at a time. They’re more suited to faster runs.

Appropriate distance and time of day for your breed – Not all dogs are suited for your daily jaunts on the streets or trails. Some breeds can barely make it half a mile before calling it quits. And some breeds cannot handle certain elements. For example, I wouldn’t recommend taking a burly St. Bernard for an afternoon run in mid-August heat of the day.

Ease them into running – It’s also important to note that all dog breeds, much like us humans, need to ease in to runs and be properly trained to do so. While many dogs are energetic all throughout their lives, puppies’ still-developing bone structures can’t handle the stress of running. Avoid taking your dog on a run with you entirely in their first 1-2 years of life, only easing them into walks that grow increasingly longer.

Don’t throw your dog into a 5-mile run for their first day. Start small with 2-3 miles at an easy pace, taking breaks as needed. Once they seem comfortable, increase your runs by 15% – around a half-mile. Allow them to acclimate much like you allowed yourself to acclimate to running.

Reward good  behavior – Reward them after each run with lots of love (avoid treats for an hour or two after runs to allow their stomach to settle). And make sure that, in the beginning, you are giving them enough rest days!

Stay patient – Puppies and new dogs to the running scene will have a harder time focusing, so you will have to be patient with their curiosity and sometimes feisty personalities. Teach them to stay by your side and avoid other runners, pedestrians, dogs, etc. Be persistent– it’s no fun to be flowing through your run only to get your arm nearly popped out of it’s socket because your dog smelled an old McDonald’s wrapper on the curb and decided on a whim to go eat it.

Have fun running with your four-legged friend!

Up Next In Running:

Compression Socks for Running: How To Choose

What is a Recovery Run? (Benefits and FAQs)