Vanlife is awesome if you want to travel full-time. However, one of the most frustrating parts about living in a van is the fact that you often can’t stand fully upright inside like you would if you were in a house.

This might not seem like a big deal, but if you’re planning on living year-round in a vehicle, having to crouch all the time can get pretty annoying.

While being able to stand upright in a van is most important for the taller folks among us, it’s still worth keeping in mind, even if you’re not the tallest person that you know. In fact, many standard-height passenger vans offer under 60″ (152.cm) of headspace, so they’re not even high enough to accommodate someone that’s 5 feet (154cm) tall.

Thankfully, there are plenty of great van options out there today that do allow you to stand fully upright so you can be comfortable at all times in your home on wheels. Up next, here are our favorite high-roof van options to choose from.

4 cargo vans you can stand up in and are ideal for vanlife: 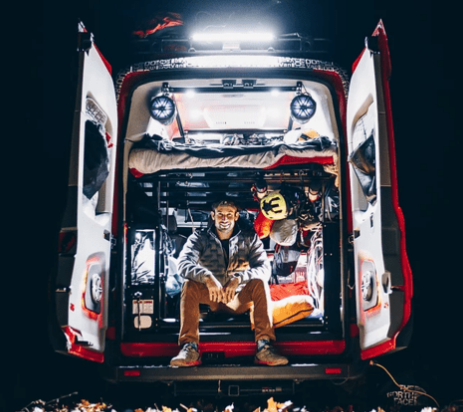 Ever since it was first introduced to the US market, the Ford Transit has been a popular choice for vanlifers. This is partially because they tend to be more budget-friendly than the other full-sized vans available, though, as we’ll see there, are some slightly more affordable options to choose from.

Plus, one of the biggest benefits of a Ford Transit is that it’s easy to drive. In many ways, these vans drive more like a large minivan than an actual full-sized van.

As far as headspace goes, Ford offers a few different “high top” models of their Transit Cargo Van. In particular, the Ford Transit Cargo Van Long EL has an interior height of 81.5″ (207cm). Therefore, it’s a great option for anyone that’s up to 6’6″ (198cm) tall.

The Ford Transit is also one of the most livable options on the market, thanks to its ample interior space. Moreover, the Transit’s square-ish shape makes it much easier to custom-build cabinetry if you’re going for a DIY approach.

If you would rather buy a ready-made van or hire someone else to do the customization, there are plenty of companies that are willing to convert Transits. For example, Sportsmobile offers stock and custom Transits while VanDOit has two different modular set-ups you can choose from for your van.

The downside of the Ford Transit? Its gas mileage is between 15-18 mpg, which isn’t fantastic. There are also no 4×4 options available, nor is a Transit really a great choice if you’re looking to do a lot of towing while on the road due to its low towing capacity. 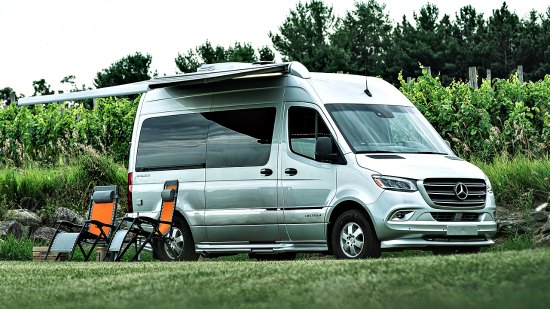 When it comes to living on the road, the Mercedes Sprinter is the veritable jewel in the crown of campervans. These vans are popular around the world, and they’re known for their great mix of quality and functionality.

There are actually quite a few different models of Mercedes Sprinters, but if you’re looking for one with a high roof, the Cargo Van 2500 is the best option. This version offers 79.1″ (200.9cm) of internal headroom, which means it can happily accommodate campers up to about 6’4″ (193cm), once you account for overhead paneling installed during the conversion process.

While many would-be vanlifers shy away from Sprinters because they come with a pretty hefty price tag, they offer a lot in terms of quality and livability. Although they’re slightly shorter than the high-roof version of the Ford Transit, Sprinters provide a lot of interior space and fairly straight walls, which make conversions easy.

They also get pretty good gas mileage for a van this size (20+ mpg) and are available in a factory stock 4×4, which is ideal for use in more rugged environments. Additionally, companies, like Airstream and Van Craft sell converted Sprinters that are ready to roll right out of the factory.

Like any van, Sprinters have their downsides, of course. The main issue vanlifers tend to have with Sprinters is that they have a complex computer system, which means that many mechanics refuse to repair them. Therefore, you often have to take Sprinters directly to a Mercedes dealer, which can be expensive and problematic if you’re in a remote area.

However, the Sprinter is often considered to be one of the most reliable vans out there, especially if you go with a diesel model, which can run for hundreds of thousands of miles.

As far as vans go, the RAM Promaster is actually quite new to the US market. However, it’s been around for years in Europe as the Fiat Ducato and is more or less the same thing in a North American-centric package (with a speedometer in miles, of course!).

Within North America, the Promaster has become a popular choice among vanlifers because it offers a reasonable starting price for what you get in terms of value. Moreover, RAM and Dodge dealerships tend to offer service at more affordable rates than what you’d get at a Mercedes dealer for a Sprinter.

The “high roof” model of the Promaster is called the “window van” and it comes with a 77″ (195.6cm) interior height. This is less than both the Transit and the Sprinter, but not by much. It still offers enough space for someone that’s about 6’1″ (185cm) to comfortably move around, regardless of any modifications you might do.

Additionally, the other main advantage of the Promaster is that it’s wide. In fact, if you’re deciding between a Sprinter, Transit, and a Promaster, the RAM’s van is the only one wide enough to fit a full-size bed from side-to-side, rather than from front-to-back.

When it was first introduced, it was somewhat tricky to find companies that sold converted RAM Promasters or that offered conversion packages. These days, however, Winnebago and Glampervan both have solid options that you can choose from.

Finally, there’s the Nissan NV. While not as well-known as the first three options on our list, this van is becoming more popular each year it’s on the market, thanks to its affordable price point.

When it comes to livability, the Nissan NV does have a fairly short wheelbase, so it’s not going to offer as much floor space as the Transit or Promaster. However, it does have a lot of storage space available above the front cab seats, which is awesome for storing things you might not need to use all that often.

Plus, the Nissan NV isn’t as popular as other options for #vanlife, so it’s easier to stealth camp in urban environments. This is particularly true as these vans have become commonplace among electricians, plumbers, and other contractors, so most people will mistake them for a service vehicle.

If you’re planning on doing the conversion yourself, the Nissan NV’s layout and straight-ish wall really simplify the process. With that in mind, since it is a fairly new vehicle to the vanlife scene, there are relatively few companies out there that offer standard packages for the NV, with ContraVans being a notable exception.

As far as downsides go, the Nissan NV’s longer nose makes it slightly trickier to maneuver, and its rear-wheel-drive isn’t ideal in lots of snow. However, this van is built well and is made to last, so it’s a nice choice for long-term use.

Sometimes, these high-roof vans just won’t cut it. If you’re over 6’6″ (198cm) or have a special fondness for high ceilings, here are two other options to consider: 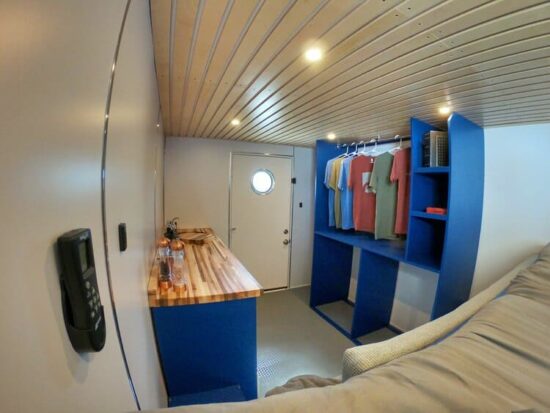 Box trucks aren’t yet super popular in the vanlife world, but they probably will rise to prominence once people realize how much they have to offer. Depending on the exact model you get, most 20′ box trucks offer a staggering 96″ (243.8cm) of interior height, which is tall enough to accommodate anyone under 8′ (243.8cm).

While the major drawback of a box truck is that they have few windows (though you can certainly create some if you want), they do offer plenty of interior space and perfectly straight-sided walls. This makes them easy to convert, and you can even hire a company like ContraVans to do it for you if you’re not feeling like taking on a DIY project.

You can also buy box trucks used for some pretty good prices (check out Penske for a good deal). Thankfully, you generally don’t need a CDL to drive a box truck if the maximum load is under 26,000 lbs. But, keep in mind that it takes practice to get good at driving a box truck and that they some not-so-good gas mileage, especially when compared to some of the vans on our list.

Cargo Van With A Pop Top 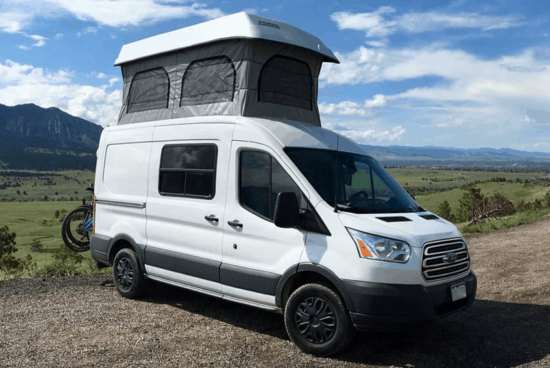 If you like the amount of interior height you get with a box truck but would rather stick with a van, there are some conversion companies out there that will provide you with a pop top roof for added headroom.

Colorado Camper Van, in particular, has a conversion option where they can install a pop top with a telescoping floor. That way, you can pop the top when you park, for over 96″+ (243.8cm) of interior height as you hang out and relax and then convert the pop top space into a sleeping suite at night.

The benefit of this option is that the pop top doesn’t affect your driving. However, some people do find climbing into a pop top bed area to be a bit inconvenient each night.

As someone who’s 5’6″ (167.6cm), I don’t have to worry too much about bumping my head every time I stand upright in a van. That being said, even though I’m not that tall compared to all the folks that block my view of the screen when I go to the movies, I’d still choose the Ford Transit as my number one pick for interior livability.

The Transit takes the cake in terms of interior height (not counting the box truck or pop top option) and offers plenty of interior space for lounging and living. While I wish the Transit came in a 4×4 option, its drivability, affordability, and decent gas mileage make it a nice choice. Plus, it’s fairly easy to convert, thanks to its straight-sided walls, so it’s a solid option for DIY vanlifers.

Up Next In Camper Van Conversions:

What is the Least Expensive Camper Van? (8 Affordable Options)

What Are The Best Vans To Live In? (9 Full-Timer Favorites)