All over the world, people are raving about their Mercedes-Benz Sprinter van conversions. From full time vanlifers living and working on the road, to outdoor lovers that use their Sprinter for weekend visits to the mountains, no one can seem to get enough of this model.

The traditional buzz around the VW campervan has given way to a wave of love for the Mercedes Sprinter which came seemingly out of nowhere but may well be here to stay. With a constant stream of Sprinter van conversions popping up on my social media pages, I decided to investigate what the hype is all about.

Why choose a Sprinter camper van? There are plenty of reasons! The Sprinter van is so popular for a camping van conversion primarily because of their reliability, driveability and spacious interiors with plenty of standing room. The superior engineering and industry awards help put them at the top of most buyer’s lists.

Here’s a deeper look at the reasons why they are so popular – and stay tuned, below we ask several owners why they chose a Sprinter and give you a glimpse into their thought process…

The Sprinter has a global reputation for its reliability. For people who are investing their life savings into building a home inside a vehicle, the last thing you’d want is for that vehicle to break down on you. This is especially true for vanlifers who seek out isolated, off-grid locations to enjoy the hidden corners of great outdoors.

The German engine of the Sprinter is well known for its reliability, staying strong and steady over the decades, even after covering vast distances. Its turbo-diesel engine also makes it incredibly fuel efficient and they tend to have a pretty impressive towing capacity.

The Sprinter has won the ‘most reliable van’ category of the prestigious FN50 awards for 5 years running as well as the ‘van of the year’ award at the most recent Motor Awards. This excellent reputation makes the reselling of a Sprinter van a relatively easy and hassle-free experience, with plenty of adventurous people dying to get their hands on this popular vehicle.

Sprinter owners swear by the driveability of this vehicle, constantly telling me that it feels just like driving a car. Although the Sprinter is the largest van that Mercedes-Benz has to offer, it is still much easier to maneuver than a larger RV and can cover steeper and more challenging terrain.

Its highly responsive steering and Crosswind Assist feature allow a safe and comfortable drive, with brakes applying to each individual wheel. This has a stabilising affect, making it safer and easier to drive in severe weather conditions.

The Sprinter is taller than the average van which can make it more difficult to handle compared to smaller vehicles, but that very feature is what makes it such a popular camping van conversion.

Sprinter vans come in a range of lengths and heights, depending on the specific year and model of the vehicle. However, they have a longer wheelbase and taller ceiling than the average van, making them perfect for taller people who are sick of stooping over in their camping vehicle.

The extra space means that vanlifers can choose to have a fixed bed that they do not have to rearrange into a seating area every day and is especially important for people that are planning to spend long periods living in their vehicle.

People that travel with their animals are always thankful for as much space as they can get and for those who want to bring their mountain bikes, climbing gear or snowboards along for the journey, the extra space can go a seriously long way.

All the sprinter owners that I spoke to seemed genuinely delighted with their vehicle choice and told me they would make the same decision in a heartbeat. However, I managed to get a few begrudging home truths about potential drawbacks of the vehicle.

Charlie and Dale (@climbingvan) converted their Long Wheelbase (LWB) Sprinter into a tiny home on wheels that would make their awesome climbing adventures even more accessible. They were attracted to the long-life span of the vehicle and the roomy interior of the LWB meant they could have a comfortable fixed that was long enough for Dale, without taking up too much of the living space.

‘A Sprinter can do up to 500K miles, so we knew if we invested a lot of time and effort into converting it, it would last us a long time!’ 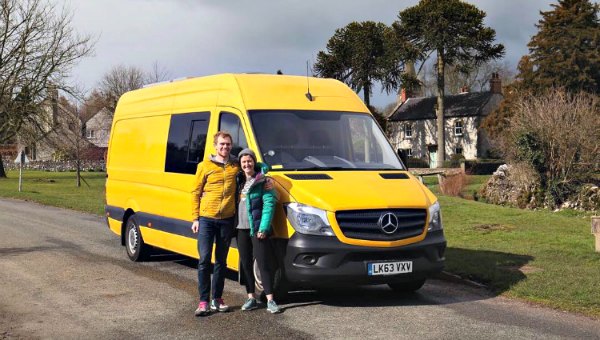 Emily and John (@eandjcampingadventures) love the driveability of their Sprinter and are hoping to lift the vehicle to make driving on dirt tracks up to mountain trails a little bit less of a headache.

They say that the sprinter is extremely versatile and can easily be fitted out for off grid living with all the affordable accessories that are on the market. Emily particularly appreciates the LWB because it gave them enough room to install a decent shower.

‘The van drives like a car, we have a bi turbo 315 which has plenty of power. As long as you keep it serviced with regular oil changes, they will go on forever.’ 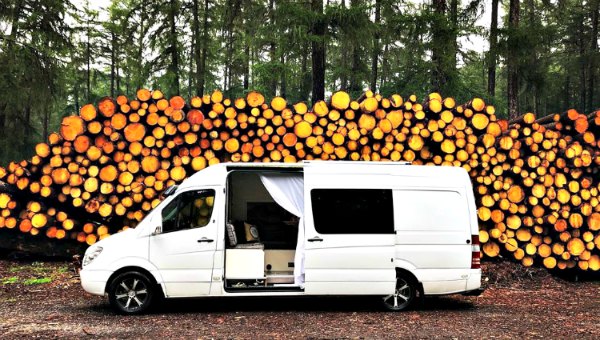 Pete (@whitevanfamily) certainly did not expect to end up with a Sprinter, having no idea that his budget would stretch that far. However, by a stroke of luck the perfect vehicle came on the market just 10 minutes down the road and the offer was too good to be refused.

He knew that  the Sprinter would hold much better value than similar models in the long run. Pete does point out that the complicated computer system can be a little confused when parking in dusty or sandy environments, which can be a big worry if you are not close to a Mercedes garage to get checked out.

However, everything has always worked out Ok in the end and the Sprinter has been the perfect van to set up home with his young family.

‘It’s been a fantastic van! Incredibly spacious and a pleasure to drive! Being a popular vehicle to convert you can easily find vehicle specific conversion parts like swivel seat bases.’ 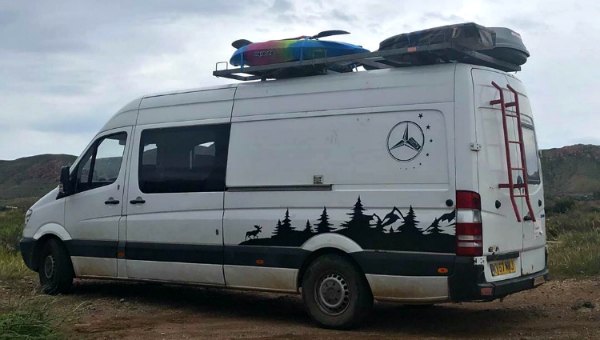 Alan (@theloveengineer) has worked for a VW dealer in the past, so he had enough connections and experience to be clever about his van choice. The experience made him realize that the hype was bigger than the reality when it came to VWs, and he was determined to get a more reliable vehicle for himself. Despite the notoriously complex computer system of the Sprinter, he is happy with his decision.

‘I went for the Sprinter because of the XLWB chassis and chain driven engine, plus I could use my connections for any technical information I might need, though I haven’t needed this so far.’

Timo and Alima (@_sprintour_ featured image top of post) are full time vanlifers who did a lot of research before deciding to invest in the sprinter. After reading up on countless test reports, they have put their confidence in the quality and technology of Mercedes-Benz.

‘We didn’t have an Instagram account when we bought the van so we didn’t actually notice any of the hype. We are both engineers and know what to look for.’

Bryce and Kenzie (@bryce_and_kenzie) have recently bought their 2010 Mercedes Sprinter with a 144” Wheelbase. Like so many fellow vanlifers, they were tempted by the long-lasting German engine that Mercedes is so famous for. The van is big enough to bring their 2 lovely dogs along for the adventure, whilst still being highly maneuverable and easy to park.

‘One drawback of the Sprinter is that most repairs must be done by a Mercedes mechanic, whereas say the Ford Transits can be worked on by most mechanics. All-in-all, we are extremely happy with our choice.’

Andy (@boatvanman) is particularly pleased with the fuel efficiency of his Sprinter conversion, saving him a tonne of money when he is on the road. He also appreciates the extra head room, being a taller than average guy, and agrees that the Sprinter is an extremely comfortable drive.

‘I got an ex delivery van as I wanted the air con in the cab plus I left the bulk head sliding door in so I’m pretty secure inside and can drive off without getting out. So far so good!’ 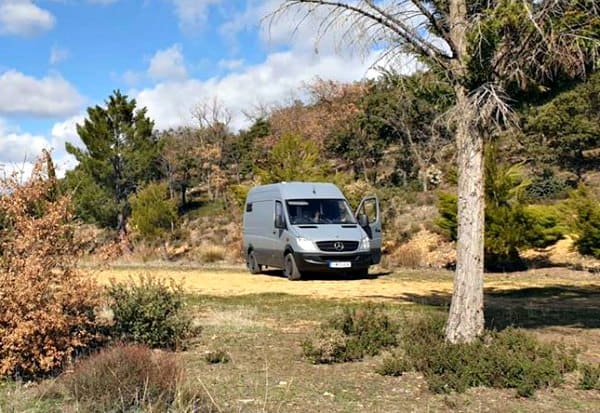 Dan (@murphythemerc) has always wanted a sprinter to convert, largely due to the countless layout possibilities that the spacious interior allows for. The extra space afforded by the LWB high top means that he has plenty of storage space without having to sacrifice a comfortable living area.

‘The Sprinter allows us the space for a garage in the back where we can keep our mountain bikes and climbing equipment. We had a couple of T5s previously but would never downsize again now.’ 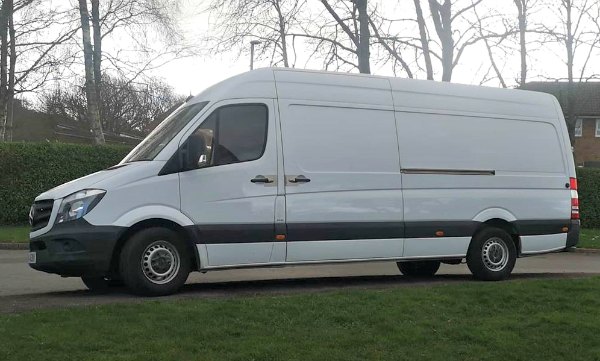 Matt has had his Sprinter for 10 years and it’s still going strong after driving an impressive 250,000 miles.

‘To be honest, I went for a Sprinter conversion because I already owned it! It was by work van before I converted it, but I’ve had transits and ivecos in the past and prefer how the sprinter drives.’

The unique combination of reliability, driveability and spacious interior means that the Mercedes-Benz Sprinter ticks an awful lot of boxes as a van conversion candidate. Its well-earned reputation as a long-lasting engine has seen it win an accolade of international awards as well as earning it the trust of the vanlifer community.

However, that popularity comes at a price and Sprinters are undoubtedly one of the more expensive van models that you could choose to buy, even when they are purchased second hand. Owners insist that the extra price is worth it when it comes to a vehicle that will last for longer and won’t fail to start up after you’ve invested your precious time and money into perfecting the interior.

For taller people, for those travelling with animals or for adventure lovers that have a lot of outdoor kit to store, the extra space is worth every cent.

Up Next In VanLife:

How Long Does it Take to Convert a Van Into a Campervan?

Saving for Vanlife (How Much You’ll Need)