So, why do hikers use trail names? Trail names are simply fun nicknames typically given to fellow hikers on a long distance trek or thru-hike. They are a fun way to “break the ice” when meeting others out on the same strenuous journey.

What is a Trail Name?

A trail name is simpler than first names since there are too many people who have similar names when talking to other hikers. A trail name is more or less a nickname that is often unique, authentic or an experience that happened to them on the trail. Most hikers will use these nicknames instead and they will just let their real name go.

Trail names originated on the Appalachian Trail back in 1948 where there’s a lot of people during peak season. Most of these names are usually acquired during day one of your hiking adventure. There is a time that a trail name is based on a place you love or where you come from. Many times, it is based on the gear that someone is carrying.

For example, someone brought a lot of cheese during their hike so they will be called Cheese throughout their adventure. Another scenario that one would acquire a trail name is basing on their personality trait or physical trait. There are a lot of people who like using trail names but there are also a number of people who choose to use their real during their hikes.

However, it is not mandatory for you to have a trail name during your hike. It is also nice to take the time to know what your trail name would be. Some people get their name on their first week of hiking or even after a thousand miles. Trail names are also great conversation starters most especially in long-distance hikes.

There is also a downside when owning and using a trail name. If a person arrives late on a certain destination, it may be hard for those who are searching for the lost hiker. It may be hard to get reliable information since they only know their trail names. You should not rush into getting a trail name just to get one. It should be unique and best reflect yourself. Either way, you should enjoy your time on the trail as well as your chosen name during your adventure.

The practice of trail names adds to the culture and the adventure of your journey. When you are in the trails you don’t talk about your daily lives like your jobs, trails name is an interesting topic during hikes. Most hikers take the trail name of their home state or how far they were headed that day.

During my research, I have found these four most common trail names that are being used during hikes:

Stretch – This might have been given to a person who usually starts their hike stretching. It is sort of a warm up before starting a long-distance trail.

Doc – The reason why a person might choose this or give this name is that they may be the ‘healer’ within a certain group. They may also mean literally since this is their profession.

Sherpa – These are dedicated to the people to carry a lot of things on their backpack.

Hobbit – Well this name explains itself.

Now, the number one trail name that is used all around is Moose. This name had been used for more than a decade along the Appalachian Trail which is carried by 15 successful hikers! 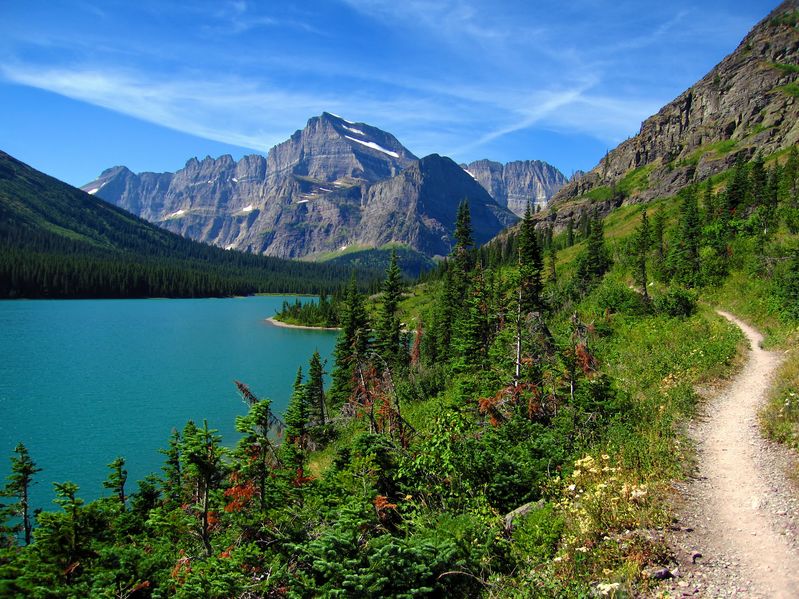 Famous Trail Names on the Triple Crown of Hiking

Since trail names are founded in the Appalachian Trail, this is one of the best trails to visit. The Appalachian Trail is more than just a footpath, it has an awesome view with plants and animals where people are dedicated to protecting its beauty. The trail is about 2,200 miles long, however, the exact length of the trail may change over time because of re-routes.

A lot of hikers attempt to hike the entire trail for a single season and many have succeeded. The very first person to finish the trail is Earl Shaffer whose trail name is The Crazy One and eventually became The Original Crazy One. Another great trail is the Continental Divide Trail also known as CDT and it runs 3,000 miles between Mexico and Canada.

This trail runs along the Rocky Mountains and transverse five states which are Montana, Idaho, Wyoming, Colorado, and New Mexico. This trail is a combination of dedicated trails and small roads that are considered to be 70% completed. There are portions that are still uncompleted and the hikers must travel by road walking on dirt or paved roads. Only about two hundred people a year attempt to hike this entire trail.

David Maceyka and the others from the Rocky Mountain Trails Association were the first ones to walk and mark the trail. However, David does not have a trail name during his hike on the CDT.

The last trail that we have is the Pacific Crest Trail which is a long-distance trail that is closely aligned to with the highest portion of the Sierra Nevada and Cascade mountain ranges. The trail is 2,653 miles and ranges in elevation from just above sea level at the Oregon and Washington border. Eric Ryback is the very first person to finish the Pacific Crest Trail back on October 16, 1970. He was an 18-year-old boy when he finished this trail. He too did not have a trail name when he finished the hike back in the day.

These three trails are known as the Triple Crown of Hiking where the total length of the trail is about 7,900 miles. You can visit a total of 22 states if you complete the entire trail. The very first person to hike the entire trail is Eric Ryback as a 16-year-old. However, the youngest person to finish the hike is Reed Gjonnes which had a trail name of Sunshine.

When 2018 came Christian Geiger, who was an 8-year-old took over the title of the youngest person to finish the Triple Crown of Hiking. His was known by his trail name as Buddy Backpacker and he was accompanied by his stepfather.

Another great hiker who completed this trail is Elyse Walker who was known by her trail name Chardonnay. She was the first black woman to finish the back in 2017. In order to complete the entire, the Triple Crown in one year, all parts have to be finished between March 1 and until the end of the year.

Can my dog have a trail name?

The answer is yes! A lot of hikers loves bringing their fur buddy during their hiking adventure. Why not let your dogs join in the fun of having a trail name, right? You might think that it may be confusing for your dog since they are trained to answer their original name. With the proper training, your dog will eventually get used to their trail name.

Just like your own trail name, you can base it on the personality of your dog or something that he/she has done during your adventure on the trail. Like what I mentioned in the article, you might not want to focus so much on trail names but enjoy your adventure with your little friend and the people around you.

Is it hard to pick a trail name?

However, you should not overthink what your name should be, instead, you should just enjoy your hike. Make sure that you enjoy the view that while you hike and appreciate what nature has to offer. Do not dwell too much on the trail name that you should use but enjoy every moment you have on the trail.

To summarize, trail names are used by hikers who are hiking long distance trails. These are usually given by your friends, yourself, or it is based on your behavior on the trail. It is part of the culture in having a trail name when you’re hiking. Always remember that you should not dwell on your trail name for too long, just enjoy the adventure that you will be having during your hike.

Can You Hike 20 Miles a Day? (Backpacking FAQs)

How To Mentally Prepare For a Thru-Hike: Tips, Tricks and Advice