We’ve all heard horror stories of people getting terribly sick from unsafe drinking water, sometimes even after they tried to filter or purify it. The good news is, as technology and science has progressed, humans have continued to advance water purifying methods.

So, filtering and purifying water while backpacking from a natural source is quite safe and isn’t as scary as it sounds. There are dozens of products on the market that promise to filter and purify the water you collect to drink. Luckily, they are heavily regulated and approved by the U.S. Environmental Protection Agency.

It is important to do some research before relying solely on backcountry water sources to learn how to best combat the parasites, bacteria, and viruses that can be in unfiltered water.

The Biggest Threats of Untreated Water

The CDC has put us at ease by noting that viruses pose less of a threat in the North American wilderness than other parts of the world. Viruses only travel between same species typically. So, in the backcountry, you and others you’re with are the only carriers of viruses that can affect you. Most of these viruses spread via human fecal matter.

The viruses most prevalent in North American water sources include Hepatitis A, Norovirus, and Rotavirus.

Norovirus and Rotavirus induce severe vomiting, diarrhea, and fevers which can lead to severe dehydration. These viruses are not life-threatening to adults if you are able to rehydrate. This can be problematic if you have to use the same water source that infected you. While bailing on your plans is not necessary, vomiting and diarrhea is definitely not ideal in the backcountry.

If a child is infected with either of these, evacuation is necessary as their immune systems are much more sensitive.

Hepatitis A can only be identified by tests run by a doctor, and symptoms are different in everyone. A person can have it and not even show symptoms of it before it runs its course. In extreme cases, it can damage a person’s liver enough to be life-threatening. Hepatitis A can take 2-4 weeks to even present any symptoms and will typically last 1 week in healthy adults.

Hospitalization is not necessary in most cases, but blood tests are the only way to positively identify it.

Luckily, the more life-threatening bacteria that can be found in backcountry water sources are large enough to be caught by water filters. Such bacteria include big names such as E. coli, Salmonella, and Cholera. As with viruses, human fecal matter can carry these bacteria.

It is so important to dispose of human waste responsibly to avoid infecting the surrounding environment with human viruses and bacteria. Follow Leave No Trace (LNT) principles, and either dig a cat hole 6 inches deep and 200 feet away from any water, or by packing it out entirely. In desert environments, it is best and usually required to pack out all human waste to eliminate this threat.

“Human fecal matter can take decades to fully decompose in the desert soil.”

Something you don’t typically think of while in the backcountry but will help eliminate infecting your water and food is washing your hands! Always wash your hands after going to the bathroom and before treating any water or making food. Follow LNT practices, and find soap that is safe to use in the backcountry, such as CampSuds.

What’s the Difference Between Filtering and Purifying?

Filtering is your first step to getting safe drinking water. In most areas in the Northern American Wilderness, this will be enough to ensure safe water. Filters simply filter microorganisms and other biomass and particulates out of the water.

They do not sterilize or kill organisms too small to be caught by the filter. Such organisms include viruses. Viruses are much smaller than bacteria and parasites, so filtering will not get rid of these nasty threats.

As mentioned earlier, if your surroundings suggest improper disposal of human waste near any water source, you will need to purify that water.

Purifying means to kill any organisms that may be in the water after filtering via UV light, heat, or chemicals. There are several purifiers on the market today, but if you run into a questionable water source only equipped with a filter, you can purify the water by boiling it at a rolling boil for at least 1 minute.

This is probably the cheapest method of purifying water, since you won’t have to purchase anything. While there are some bacteria in the world that can survive boiling, they are mostly food-borne bacteria, and they are big enough to be caught by filters.

How to Choose the Best Filter and Purifier

Since water treatment is a literal life saver, many people are very loyal and opinionated about their favorite devices and systems. But how do you know it will work for you? It can be scary to put all of your trust into water filters and purifiers since the consequences will be so uncomfortable.

There are several Ultralight filters, one of the most popular is the LifeStraw. This is a great device for drinking water in a pinch, but you cannot collect water for cooking or water you will need when you won’t be near a water source. However, it is cheap and weighs a mere 2oz.

One of the best systems on the market is a gravity filtering system. Many brands make a similar system, but they all work the same. There is a reservoir that can be filled with water and hung from a tree. A tube at the bottom of the bladder is connected to a filter.

There is usually another tube that goes from the filter into another bladder usually labeled as the Clean water reservoir. Here is an example of one that I personally prefer. I don’t bring this one while backpacking because it takes up quite a bit of space, but I love it for multi-day river trips. 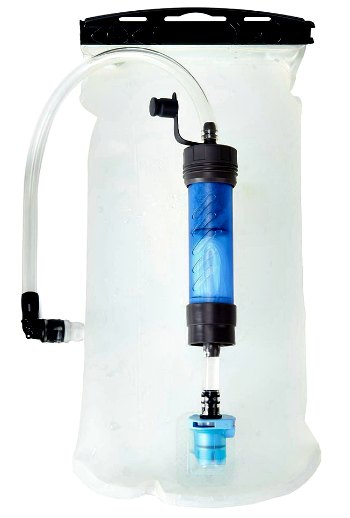 is one of my favorite devices to use for backpacking because it is collapsible, lightweight, and can be used in various ways.

You can use it as a water bottle, drinking straight from the filter like the LifeStraw mentioned above, or you can rig it into a Gravity filtering system.

The filter detaches so you can use it the same way as the original LifeStraw and drink straight from a water source. It is not terribly expensive and is totally worth the cost for all that it does.

UV light purifiers are very popular but can be pricey. The SteriPen is loved by many of its users. This method of purifying water is preferred by a lot of people because, unlike chemical tablets that kill microorganisms, they do not make the water taste like chemicals. Iodine Tablets might be the cheapest option for water purification.

As mentioned before, boiling water at a rolling boil for at least 1 minute will purify water after filtering. Since filtering water usually takes a good amount of time, the downside to boiling the water is that it is the slowest method of purification.

If you are currently on the trail while collecting drinking water, it is way easier to plop an iodine tablet into the water than to get your camp kitchen out of your pack to boil the water.

There are a few identifiers in natural water sources that give you an idea of how clean or dirty the water is before attempting to filter and purify it. It is important to take all of these factors into account before gathering any water.

Why put yourself at risk more than you have to?

By gathering water that may be cleaner to begin with can save your water filter some life and will (usually) taste better. It is helpful to know that filtering and purifying, unless using chemical tablets, will not change the flavor of the water.

Things to Pay Attention to:

When it comes to collecting water from a natural source, be prepared and knowledgeable about what to look for and how to combat threats. Don’t drink anything you don’t feel comfortable drinking! If you are with someone who trusts some crazy looking water and wants you to drink it too, use your own judgement and instincts. Don’t be afraid to say “no.”

Related content: How Much Water Should I Carry Backpacking?