When you think of China you probably think first of the Great Wall, one of the countless magical wonders of the world. Images of the majestic piece of medieval architecture are probably quickly followed by images of China’s millions of people and crowded streets. When you combine the two, it makes for an unpleasant experience as a tourist.

When I found myself with the opportunity to take advantage of Beijing’s 144-hour visa free transit period, I knew this was my chance to experience the wall for myself. After spending a day seeing the downtown sights and being overwhelmed by Beijing’s population of 21.54 million, I knew I had to do my research and find a way to experience the wall without the tourists.

After a few hours spent scouring the Internet for day-tripable options, I discovered a section of the wall located in JinShanLing. Placed 125km north east of Beijing, JinShanLing requires a little more effort to reach than the more popular options of Badaling and Mutianyu however, because of this, it’s lack of visitors are well worth the effort!

After gathering bits and pieces of rough info from various blogs, I put together a plan and early the next morning, my friend, Kelly, and I set off.

Public Transport Options Out of Beijing

During peak season, there is a direct tourist bus leaving in the morning and returning in the afternoon. However, as it was the end of February when I found myself here, it was very much off season, leaving me having to find an alternative.

Transport = Around 3 hours each way

Leave early to ensure you have enough time to get there and back whilst comfortably enjoying the walk, there’s nothing worse than feeling rushed in order to make the bus home or risk being stranded!

Take exit D out of the metro station, cross the road and you will soon stumble upon the ram-shakle bus station

This bus runs all year although it is worth asking your accommodation to check the times when you arrive in Beijing. The times below are what I found online and seemed to be roughly accurate for my trip in February. We aimed for the 8am bus.

On our way we were actually approached by a woman advertising a direct transfer to the wall. In the confusion of trying to find the bus station and knowing we had just missed a bus, we chose to take her offer over waiting another hour to leave. She assured us it was much faster and we could return with their transfer so this seemed like a good option, given at this point we were unsure about how to get back independently.

We paid the driver 55 CNY each, crammed into the back of the rickety van and waited in anticipation as it filled with locals before leaving. Driving through the outer suburbs of Beijing gave us an interesting insight into how the real Beijingers lived. Away from the near pristine, tourist filled center of Beijing, we saw grimy streets, local markets and crumbling yet inhabited homes.

As the drive continued, we could see the terrain becoming quite mountainous, quite quickly, my excitement growing parallel to their heights.

Somewhere along the way, the driver stopped on the highway, got out, placed shower caps over his number plates and continued on. After passing some sort of checkpoint, he then again, stopped, removed the shower caps and continued as if nothing out of the ordinary.

As no one else seemed to batter an eyelid, Kelly and I wondered where all these people were going, they defiantly didn’t seem like tourists. Shortly after this, our confusion mounted when we pulled into a deserted parking lot and were told this was our stop. All eyes starred as we got out of the van, we were the only ones.

The driver then slammed the door and drove off without a word… I guess we aren’t getting picked back up later! This “direct shuttle” took around 2 hours and cost 55 RMB vs the 2.5 hour, 32 RMB local bus. The option is up to you however, in my option, the van was not worth the extra yuan. 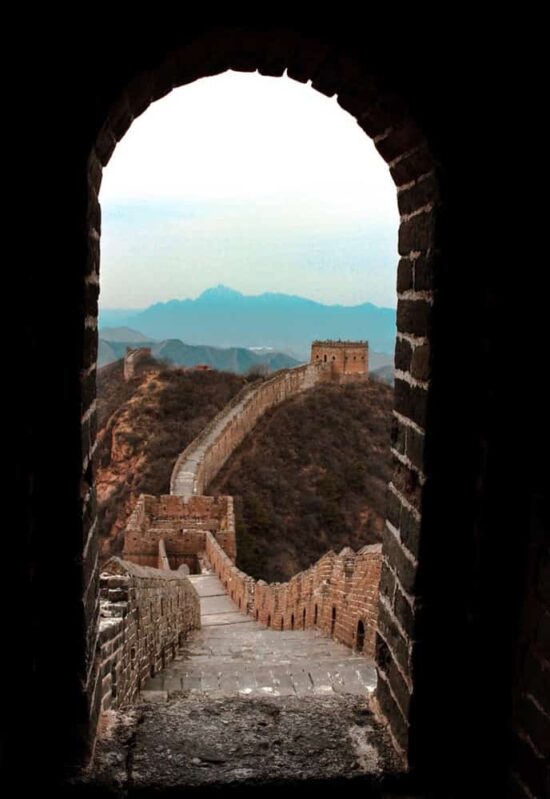 How Much Time to Budget at The Wall

Allow 2-6 hours to fully enjoy the wall, depending on how far you would like to walk and how many photos you want to take! Leaving early is really worth it to experience it properly and with less people.

Now what you’ve all been waiting for, the secret to having the Great Wall of China all to yourself is to start early, and from the EAST entrance of JinShanLing!

Seeing as you have gone to the effort to get here yourself, you deserve this! There are some expensive tours that bring tourist to and from the JinShanLing section of the wall however these tours drop off at the West gate.

Because of the time it takes to walk this section, few people make the whole distance. Thus, the only people you should come across coming the other way will be later in the afternoon.

After being dropped in the eerily, empty parking lot, we managed to find the ticket booth and purchase tickets. Entering through the turnstile we found a 40 min climb to the wall itself. Speakers announcing the rules, reminding us to stay on the path and not to litter, occasionally broke the foggy silence as we could see the ridge coming closer and closer.

We wondered if someone in a far off office, was watching us huff and puff from the periodically places cameras.

Stepping onto the wall itself we did encounter one other soul, the lovely lady trying desperately to sell us her souvenirs. Be careful, if you’re not firm in your refusal, she will try and walk with you until you buy a magnet, even if you insist you don’t have a fridge to put it on! 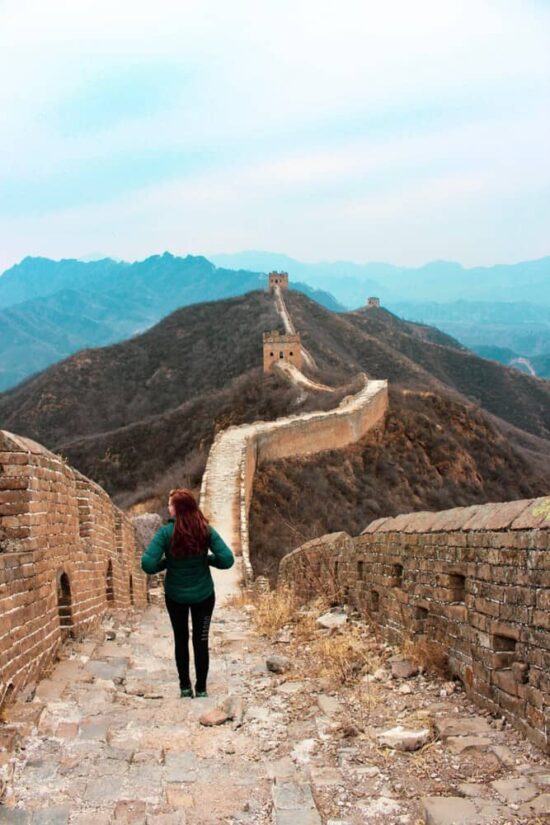 Regardless of whether or not you intend to walk all the way to the other gate, you should first turn left and take a walk across one of the few original un-restored parts of the wall accessible to the public.

It is amazing to see the crumbling façade in its raw original state. Standing on top of these blocks, puzzle pieces that were placed in this very spot hundreds of years ago, in a totally different world, and knowing how much these walls have seen over that time is incredible.

Looking out into the distance at the 21,196 Km of wall, snaking it’s way up and around the mountains, its hard not to think of the millions of people that put their lives into this fortress. 2,000 years of history, a wall that was built, eroded, extended and rebuilt over and over, now stood in ruins at my feet.

As you are only allowed to walk a few hundred meters in this direction, shortly after you climb through the second tower you will find a very bored security guard. Luckily, he seemed like taking our photo was the highlight of his day (and he actually took some pretty decent photos).

After you are turned around, return past the souvenir seller and continue onto the partially restored section leading to the west gate.

If you would like to hike the length of the wall between the gates it is approximately 7km/4hrs. Don’t let the restoration lull you into a false sense of security. A lot of the walk is comprised of crazy steep slopes and well-worn, high steps. You’ll defiantly up your step count for the day!

Kelly and I decided to walk down this way for a while before returning to our start point at the east gate, as we were unsure of bus times at this point. 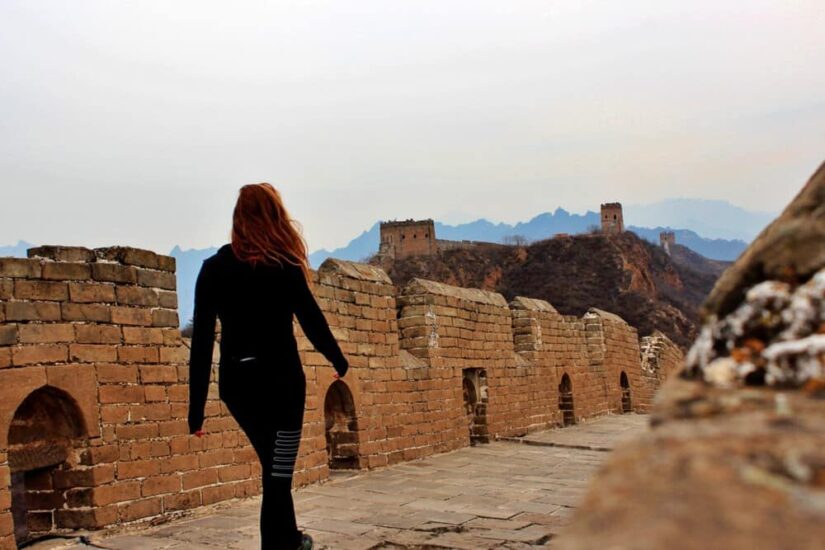 If returning by the public bus it is vital to make sure you allow plenty of time to reach the petrol station. Don’t forget about the 40 min walk from the wall to the entrance and the 20 min walk to the station.

Having been dropped directly at the gate with no orientation, we now had to find our way back to the service station. Having asked the woman in the information con (who spoke no English), we vaguely knew it was down the hill and through the tunnel.

As we began our walk, a friendly dog joined us. As he ran along the road we continually tried to send him home, fearing for his safety. The dog persisted, walking ahead and waiting patiently for us to catch up.

As our path ran out and we were left slightly confused on the side of a highway, our new canine friend really took charge. Following him blindly, he actually led us all the way to the service station and deposited us at the door of the convenience store!

What’s even more miraculous is that some friends of ours followed my directions a few days later, and they too, were led by the very same friendly guide dog! So, if you happen to stumble upon a medium sized stray, with hazelnut colored legs and a black back, you can trust this highly proficient guide.

The last bus returning to Beijing leaves around 4:30pm however my research told me that up until the 3:30pm, you must have a prior reservation. I advise that you aim to take the 3:30 bus at the latest, the last bus at 4:30 can not be booked and may be full by the time it arrives in JinShanLing Service station however can still be used for a plan B. 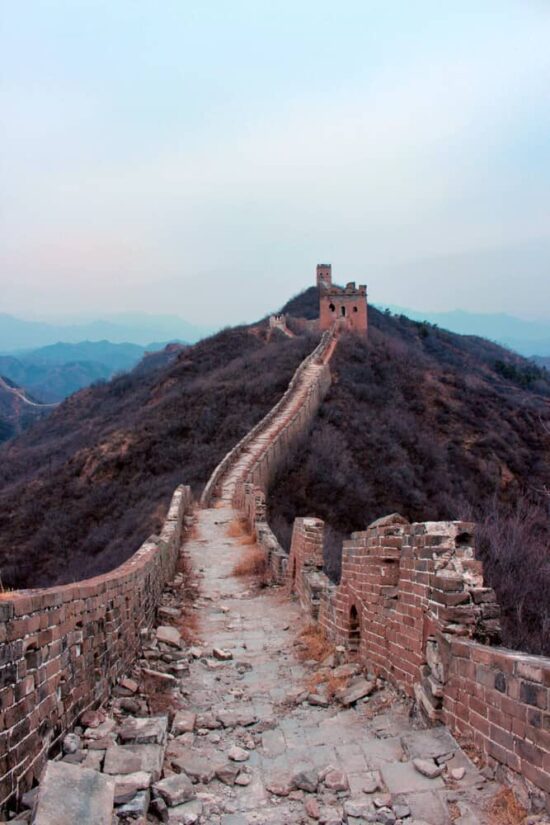 Reservations can be made by the bus company representative who will be sitting inside the convenience store at the service station. When looking at the collection of buildings, enter the far right shop. You will find an L shaped counter on your right and a woman in a blue and yellow jacket, sitting in the corner.

She will most likely be playing her phone however without looking up, she will call ahead and book your seats when requested. You must arrive at 3pm at the latest so you are able to book seats before the bus leaves its starting terminal.

Expense Breakdown For The Day…

So there you have it, an adventure to the Great Wall of China, without millions of tourists!

How Much Does It Cost to Go to The Antarctic?