Not every bikepacking endeavor need be a multi-week epic, nor does every weekend trip need to be a ho-hum ‘that was… fun’ that doesn’t get out into the boonies. There is compromise to be had! Look no further than the Butte Batholith route in southern Montana! An achievable long-weekend singletrack ride from Bozeman commands gorgeous, open high country along the Continental Divide.

The route is beautiful. Wild and fun and classically Montana. I was lucky enough to ride (most) of it in 2017. And it was wonderful. Montana’s motto is “Big Sky Country”, which I’ve always thought was pretty dumb. The observed horizon line is determined by your relief from the landscape around you. The Sky is Big no matter where you are, you just can’t see all of it. But here I stand, corrected.

Even in small valleys, the world stretches on forever. The vastness feels yawning. Maybe because it is so blessedly devoid of people, Montana is big.

Churning through forgiving dirt among the purple wildflowers and silver-fox deadfall from the last fire, the world evaporated. Shimmering afternoon light filtered through that particularly densely needled Montanan pine tree. Each ridge brought a new world, full of beauty and complexity. Everything is gnarled, or made of granite, or both.

Bear spray in hand, I found one of those perfect, high-elevation, aesthetic campsites that are themselves worth a journey. A warm breeze wafted through, just enough to remind me that being outside is distilled joy, but not enough to make me think otherwise.

Bike propped, tarp erect, dinner consumed, I relaxed for the sunset, but my phone buzzed. 2 bars of LTE. Some days you just can’t get a break. The sun relaxed into the cradle of the hills around me, the sky dimming to a dark violet.

After a drafty night – my tarp lacks walls or a door – and a hypnotically revolting and gelatinous concoction of oatmeal, peanut butter, protein powder and instant coffee, it was time to embrace the not-quite-crisp summer morning and ride my bike. Off I went. I found more valleys and beautiful, contorted husks of trees. 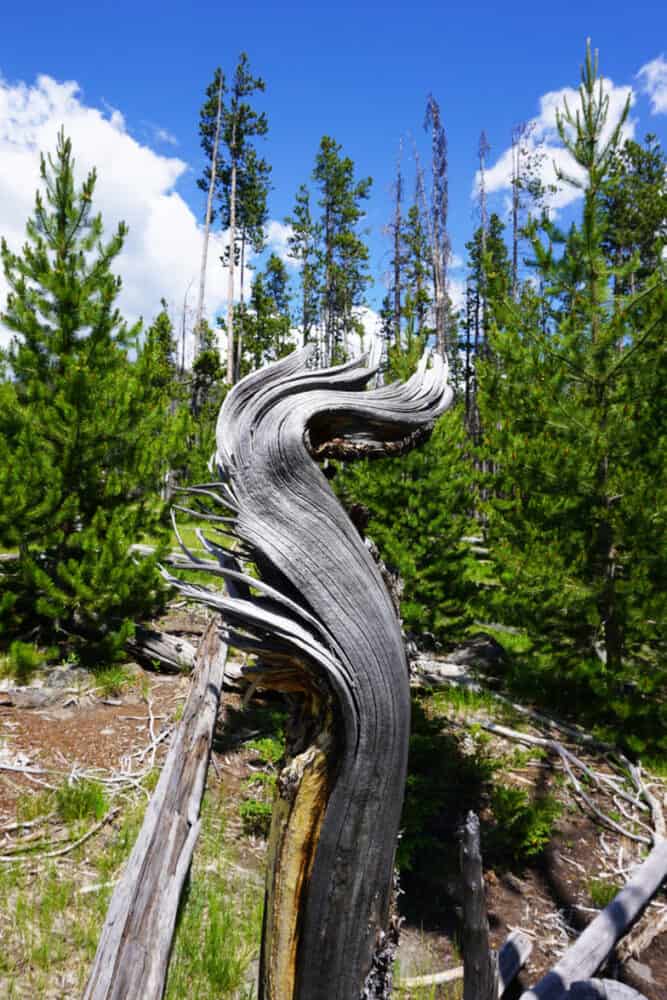 Melted, blown glass that used to grow leaves every spring, but now stands in permanent monument to the chemical energy the forest squirrels away. Twisted and gnarled in perfect stasis, these trees stand in the middle of a windstorm only they can remember.

A few buttery-smooth river pebbles are sprinkled throughout the skeleton forest, casting shadows over my bike as I wind my way along the trail and between them.

Perhaps this is the land of endless sky. The valleys go on because they are indistinguishable from one another. These rolling hills, blanketed in pine and dotted with boulders, hint at just enough difference that you might know the difference between them, if you were cunning. They all look enough the same to me.

I would bet the sky isn’t all that much bigger than Kansas’, but I’m also not one to pick nits. In Montana, the sky is big enough to blanket the earth and leave some for later. Ceaseless blue above and interminable green below left me beyond the reach of cell towers and highways and real estate listings.

And I began to roll again, the soothing, sifting crunch of dry dirt beneath me was a rough speedometer. The rustle of the trail and the pines quietly filled my little slice of this big sky. I glided and undulated through the forest, dodging boulders and peaks and bears. Time is hard to a keep a hold of in this place.

Until, that is, the freehub exploded. While exploded is perhaps a strong term for the phenomenon, I can say with surety that it no longer connected the cassette to the wheel. So there I sat, along a ridge, with a newly downhill-only bike. Thankfully, the route is a figure eight and I was almost done with the first loop, so I was able to coast back to the center point and trailhead.

That is only one of the nifty aspects of the route. Riders are able to be ‘out there’ without having to be terribly terribly far from the security of pavement.

Sitting along a desolate fence line, I was 20 minutes of pushing and a 2000’ downhill away from my car, even though I had been riding for a day and a half. While that can compromise the true backcountry feeling of the route, it does make a rowdier, backcountry singletrack ride a little more approachable to the newer bike mechanic or singletrack rider.

The costly mistakes that can make your trip spiral become a little less costly with such proximity. I will say that I still felt far away. Maybe it was the terrain – rolling hills and fir forest – that helped that feeling, but it certainly didn’t feel like a backyard ride. Of course, the western edge of the northern loop overlooks Butte directly, but at least it’s from a distance.

For the accomplished mountain biker, the riding is not technically hard. It can be occasionally root-y and rocky, but the majority of the riding is smooth, open and easy on even a rigid 29er. What does make the endeavor challenging is the 14,000’ of climbing, chopped up into many small climbs.

I personally found a fair portion of the climbing quite a high grade for my 36t rear cog. With a heavier setup or older drivetrain, definitely prepare for slow climbing. Very little of the up is a gimme – that perfectly graded, smooth dirt road we all imagine ourselves crushing – but rather a panting, sweaty sometimes desperate venture.

Again, all of this depends on your background. Coming from a gravel background, I struggled with the harder climbing, but real mountain bikers would find it far easier than I did.

The total length and water sources make the route rather forgiving as well. No water carries are realistically longer than a day, but carrying four liters of water over a full day of singletrack is not to be underestimated. 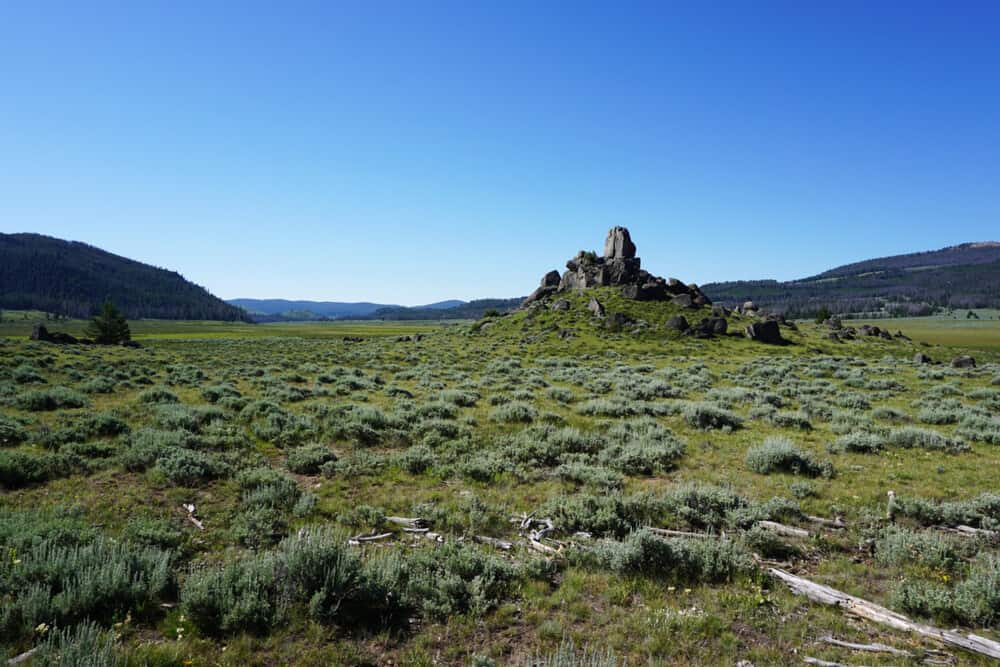 Being a double loop route, the planning could not be more forgiving, as I amply road-tested. I think at the longest a rider will be 40 miles from I-90 and their car. For food beforehand, Thompson offers a small handful of very last-minute resources, but Butte or Bozeman, depending on where you’re coming from, are the best before and after stops.

Both are endowed with large bike shops, so you could find, say, a new freehub, if you needed one.

Either loop could alternatively be run as a single day loop returning to a car parked at the Homestead Trailhead. This would speed up the process, but the high country camping is well worth lugging a sleep system for.

Hard to stress this one, but this route is in the high country of Southwest Montana. There will be snow in May. There will probably be snow in June. There might even be a bit in July, or October. I found all marked water sources wet in July at my last attempt. The temperatures were sometimes a tad higher than ‘ideal riding conditions’ but far from prohibitive.

Later than early October would be cold, and an early season storm certainly wouldn’t be out of the question.

High summer is best in terms of route condition and water sources, but it also affords riders the truly stunning wildflower bloom that seems to pull me to Montana most summers. The flowers are worth not passing up. That is hard to overstate, but Montana in July is an alpine heaven.

The camping, thankfully, is unorganized. Relish the endless pine needles and gnarled blowdown while you can. Sleeping the night before or after in Bozeman or Butte – again depending on location of origin – would be very reasonable. The trailhead is maybe 90 minutes from Bozeman, and far closer to Butte. Bozeman, however, is the much nicer city, and closer to better mountain biking! 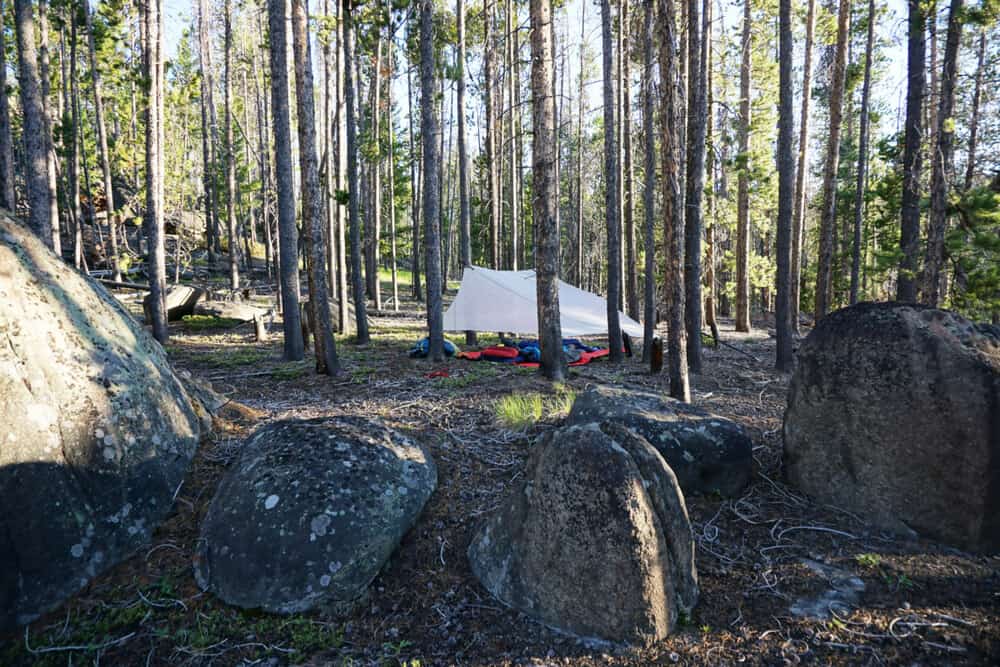 Is this route worth driving from Topeka for? Unless you love granite outcrops and pine forest, probably not. But, if you’re within a day’s drive, it might be worth bailing on mother-in-law plans. This trip will sell you on Montana, so it might be in your best interest to pack up your apartment before you ride, as you’ll probably be looking into the housing market in Gallatin County.