Humans love to be challenged. We thrive on the possibility of our own failure– if failure is not a possibility, then the task isn’t worth working toward in our eyes. That’s why as things become easier, we find ways to make the task harder– making puzzles more and more complex, lowering the World Athletics Championships time qualification standards, and creating increasingly difficult ultramarathons.

Ultramarathons are a fantastic way to lay ourselves on the line and present ourselves with the possibility of failure. For some, however, a simple ultramarathon is not enough. Some seek to test their limits even further– facing harsh weather, steep elevation gains, a lack of aid stations, brutal cutoff times, etc.

I like to call these people ‘admirably crazy.’ ‘Admirably’ because even having the desire to test your limits in this way is impressive– who wants to do this, and why? To knowingly throw yourself into this great big unknown, with the possibility of failure, the certainty of long-lasting physical and mental pain, and the rewards in sight is downright respectable.  And ‘crazy’ because, like I said before, who wants to do this? And why?

For all of you admirably crazy runners out there, or aspiring admirably crazy runners, or for just you curious athlete wondering about how hard a race can get, I compiled a list of the 15 hardest ultramarathons in the world for you to read about. And in all honesty, just researching these ultras made me tired. Warning: they may make you tired, too. Proceed with caution.

What is the hardest ultramarathon? Here’s our top 15 picks:

What Makes it Tough: Participants get to run, bike, or ski along the same iconic Iditarod trail, all while dealing with gale force winds and sub-zero temperatures as far below as -50 degrees Fahrenheit. However, not just anyone can enter– to compete in the 1,000 mile race, you have to first successfully finish the 350 mile race and prove your winter survival skills. Tough.

What Makes it Tough: You may have heard about this race, or seen the documentary about it that used to be on Netflix. There are five loops, and each loop is about the distance of a full marathon. Runners will have no access to GPS, and the course is unmarked (except for checkpoints in which participants take a page of a book placed at each checkpoint that corresponds to their bib number) and only ⅓ on trails, so runners have to mark their own maps the day before the race starts– which is at an ambiguous time within a 12-hour time frame.

Runners have 60 hours to complete the race, and will have to ascend and descend a total of 120,000 feet– that is, if they finish all five loops. Only a small handful have ever done it.

What Makes it Tough: Here’s another cold ultra that’ll have you battling against heavy winds and sub-zero temperatures. The course is hilly and mostly runs north of the Arctic Circle, but features beautifully barren panoramic views. And when they say the race will be windy, they mean windy enough to overturn large trucks onto their sides.

What Makes it Tough: Runners have under 72 hours to complete this grueling ultramarathon that runs through the gorgeous Indian Himalayas. However, runners will also have to run through three 5,000 meter mountain passes. The altitude change can become so extreme, that altitude sickness and a lack of oxygen is a high possibility.

Race organizers suggest taking these passes slow enough to not shock your body– that means, no sprinting up and down these hills in order to catch somebody. Death is a possible outcome from severe altitude sickness.

What Makes it Tough: Apart from the fact that you have to run 3,100 miles?! You’d have to complete this distance on a static course in 52 days– that’s averaging at least 59.6 miles a day (though you can run more in a day if you’d like/are able to). And you can only run from 6 am to 12 am each day.

This run has been heralded as ‘the Mt. Everest of Ultramarathons’ by The New York Times. Only a few people finish each year.

What Makes it Tough: Participants have to traverse through rugged forests and grasslands using a GPS within 120 hours (with some elites finishing in 80 hours). There are five aide villages where you can stop along the way, however, it’s best to carry your own pack full of extra clothes, food, and hydration. The constantly changing terrain, all at 6,500 feet of elevation, makes this race incredibly tough.

What Makes it Tough: I heard about this race a long time ago, and I remember specifically hearing that if you don’t run along the white line on the roads during the heat of the day, you run the risk of the soles of your shoes melting off.

With the gun going off in early July, at the lowest elevation point in the United States, this race is known for the brutal heat and extreme elevation change, starting at -280 feet and ending at 8,300 feet on the trailhead to Mt. Whitney. Overall, runners will experience over 14,000 feet of total ascent.

What Makes it Tough: This is more of an adventure ultramarathon that tests not only your endurance, but your wilderness intelligence and survival skills. Runners have to cross rivers, traverse through dense jungle, and will come across mosquitoes, snakes, leeches, and even larger prey like jaguars. This ultramarathon is not for someone with a deathly fear of insects or spiders.

What Makes it Tough: There’s about 10,000 meters of ascent to complete in this race. However, it’s not just the ascent that’s daunting– there are many steep drops on volcanic rock that’s said to induce vertigo, so those prone/sensitive to vertigo should not attempt this race. Along with the extreme ascent and descent comes extreme weather patterns, making this the ultramarathon that checks all the boxes.

What Makes it Tough: This is an entirely trail-less, trackless race– don’t expect any pathways showing you the route as you traverse through this ~196 mile course. Runners’ navigation skills, on top of their endurance and sheer will, are put to the test here. Since the race runs along the “spine” of Wales, the terrain will be uneven and the ascents nearing a total of 15,000 meters.

This opens up the door for some seriously off-kilter weather patterns.

What Makes it Tough: Ever run an ultra almost entirely on rock and soft sand? Well, now’s your chance. With difficult terrain and sharp inclines and declines, the Grand to Grand is not for the faint of heart. This race features a total of 18,000 feet of ascent, and is a six stage race.

While the views may not be panoramic, running through slot canyons in the Grand Canyon is surely something most other ultramarathons cannot compete with.

What Makes it Tough: Was the Grand to Grand not sandy enough for you? I found another ultra that will make the soft sand of the Grand to Grand feel like playing in a sandbox. Running through the Sahara Desert, this ultra covers six stages, with one rest day mixed in, and forces runners to carry their own food on their packs.

Basically, runners are not only running 150 miles in the heat of the desert, they’re doing so with a around ⅓ of their body weight on their backs. 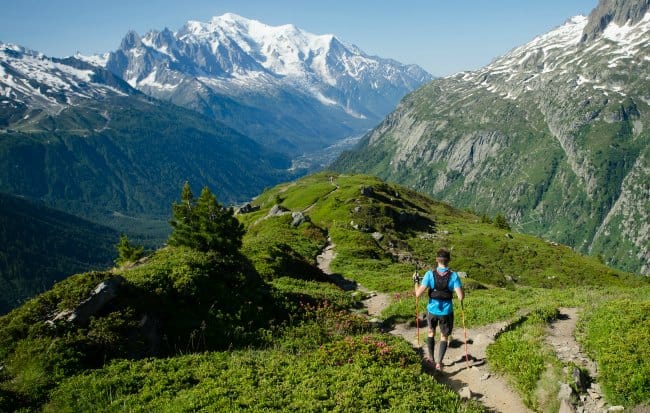 Tor de Géants is one of the hardest ultramarathons with over 24,000 meters of vertical gain/loss.

What Makes it Tough: There are 25 mountain passes in this race. 25. And if that wasn’t enough for you, the total amount of ascent is around 24,000 meters. And if that’s still having you rolling your eyes, runners are faced with extreme weather conditions and temperatures as they go. But the stunning views may be worth it!

What Makes it Tough: Want an ultramarathon so cold you could easily risk hypothermia and/or frostbite? Look no further than this ultra. Temperatures regularly run well below zero degrees, so planning accordingly is a must. Runners also are required to not only bring along their extra gear and necessary food and hydration, they also have to do so by pulling it all on a sled. Basically the Iditarod without the dogs.

What Makes it Tough: Strict and difficult cutoff times makes this race from Athens to Sparta incredibly difficult– runners have only 36 hours to complete the race. Less than half of participants finish the race– either they dropped out or missed the cutoff time. This race is steeped in history, and is considered one of the toughest races in the world.

Closing thoughts – If any of you readers are now considering entering any of these races after this article, then all I have to say is… you’re welcome? But above all, good luck. You may need it.

And if any of you have already competed in any of these races, or have a more difficult ultra in mind that isn’t included in the list, let me know in the comments and I’ll be sure to remind you how admirably crazy you are (that is, if you’ve competed in them).

See you on the trails!

Trail Running Hydration Packs: What The Pros are Wearing

What Breed Of Dog Is Best For Running?