Pehaps the most well-known hiking trail in Zion National Park, Angels Landing is an exciting day hiking opportunity for anyone on a trip to one of the United States’ most popular national parks. The hike gains some 1,488 feet (453m) over 2.7 miles (4.2km) of strenuous uphill climbing providing hikers with some of the bests views in Zion National Park.

Angels Landing starts at the base of Zion Canyon and follows a narrow, highly exposed ridge to a summit with panoramic views. The hike is so steep that hikers almost always need to use their hands and feet to scramble up to the summit.

While a chain anchored to the ground offers hikers a good hand hold for the steepest and most narrow section of the climb, anyone who looks at the hike has to wonder: Has anyone died hiking Angels Landing?

Unfortunately, it is true that people have died hiking Angels Landing. In fact, the National Parks Service has recorded a total of eight deaths on Angels Landing since 2004, with all of them as a result of falling off the trail’s steep cliffs.

Coming up, we’ll talk about the dangers of Angels Landing and the hike’s history of accidents. We’ll even give you some information on the hike so you can decide if Angels Landing is right for you! Here we go.

Here are some of the stories of falls on Angels Landing:

One of the most recent deaths on Angels Landing happened in February of 2018, when the body of a 13 year old girl from Southern Utah was found in Refrigerator Canyon, near the West Rim Trail. Park Rangers and investigators believe that she died from a fall from Angels Landing.

The girl, who was hiking with her extended family in Zion, continued on a day hike up the trail alone after her family decided to turn back. Beyond that, investigators know little about the circumstances surrounding her death. 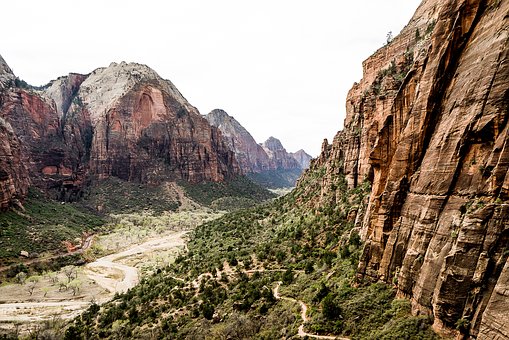 The view of the Virgin River from Angels Landing

While the death toll on Angels Landing is enough to instill fear in the hearts of any would-be hiker, the Park Service maintains that the trail itself is suitable for experienced hikers with a good head for heights. Although the trail is steep, with plenty of exposure to the canyon floor below, conservative and skilled hikers can make their way up the 1,500 foot ascent to the top of Angels Landing with minimal issue.

Of course, while anything can happen in the backcountry and no hike, especially one like Angels Landing is without risk, the National Park Service has taken large measures to help ensure the safety of hikers on Angels Landing. This includes installing chains as a hand rail for hikers on the steepest and most exposed section of the trail, some half mile from the top.

However, overcrowding on the trail, foul weather, inadequate footwear, and exceeding one’s own abilities can put a hiker at risk of injury or death on Angels Landing. If you’re looking to hike Angels Landing, here are our top tips for minimizing your risk: 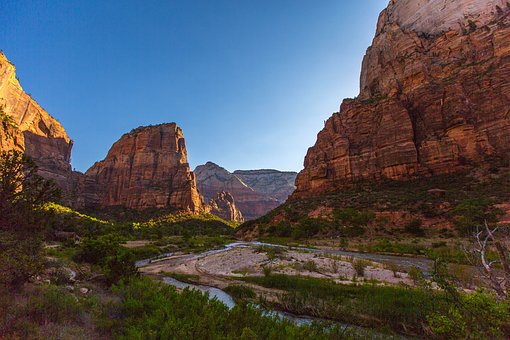 Angels Landing in the distance

How long does it take to hike Angels Landing?

Angels Landing gains 1,488 feet (453m) of elevation over 2.7 miles (4.2km) one way, making it one of the most strenuous trails in Zion National Park. Due to the elevation gain, the narrow path, and overcrowding, don’t expect to run up to the top of Angels Landing for a quick hike. For most people, a hike up Angles Landing takes about 3-6 hours roundtrip, so be sure to factor that in when planning your hike.

Can you hike Angels Landing in the rain?

While you can hike Angels Landing in the rain, it’s not really recommended. Due to the trail’s steepness and exposure, you don’t really want to add an additional hazard to your hike. A slippery foothold can be bad news when you’re almost 1500 feet above the canyon floor, so if you’re considering hiking Angels Landing in the rain, you should ask yourself: Is this worth it?

That being said, rain isn’t the only potential hazard on Angels Landing. Even in the desert, trails can get covered in snow and ice, which poses yet another danger to hikers, especially when on Angels Landing. So, if you’re planning a hike up Angels Landing, check the weather and trail conditions before you go.

How many people hike Angels Landing a year?

Although the National Park Service doesn’t keep records of precisely how many people hike Angels Landing each year out of the 4.3 million annual visitors to Zion National Park, tens of thousands attempt to hike the trail. As one of the most popular hikes in Zion, you won’t find peace and solitude on Angels Landing, in fact, your hike will likely be far from a serene getaway from the crowds.

Interestingly enough, however, the vast majority of people who attempt Angels Landing never make it to the summit. While many people turn back early on because of exhaustion or discomfort with the exposure, many hikers stop at Scout’s Lookout, which is a nice viewpoint before the steepest section the trail. 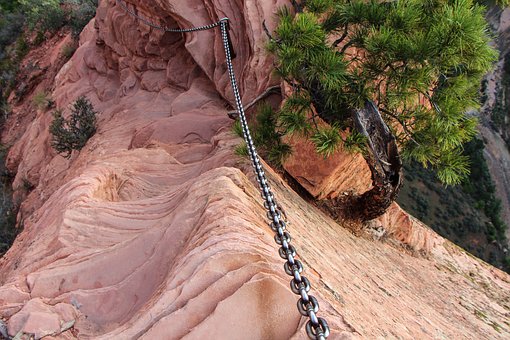 While introducing your kids to the great outdoors has innumerable benefits, Angels Landing is probably not the place to do it. Due to the steepness of the trail and its exposure, Angles Landing is not a family-friendly adventure.

Indeed, unless you’re sure and stable on your feet, comfortable with heights, in good physical shape, and an experienced hiker, Angles Landing really isn’t right for most adults, let alone young kids. For the most part, we wouldn’t recommend taking young children up Angles Landing because the risk of them running around out of control on a steep section of the trail is just too high.

If you’re considering bringing your kid on Angles Landing, they should probably already be an experienced hiker with plenty of trail  and scrambling experience. They should be able to keep a cool head while scrambling through exposed terrain and should be focused and determined enough to listen to what you say and take the hike seriously.

Generally speaking, we wouldn’t even consider bringing anyone younger than a teenager on this hike, but that’s a decision every hiking family needs to make for themselves.

Hiking Angels Landing can be an exhilarating experience for any outdoor adventurer. However, the hike is steep, exposed, and has a history of fatal accidents, so it’s not to be taken lightly.

As with any committing hike, you should feel sure on your feet, comfortable with heights, and be willing to assume the risk of injury or even death when setting out to hike Angles Landing. Be wary of hiking at crowded peak times, wear the right footwear, and check the weather before you go. But, above all, don’t forget to enjoy the adventure and the views! Happy trails!

Up Next In Dangerous Hikes:

Is Hiking Half Dome Dangerous?

Is Longs Peak Hard to Climb?

My Solo Ascent of Mont Blanc from Les Bettieres

What is the Most Dangerous Hike in America? (Top 10)