Until recently I had never heard the phrase “feral humans in National Parks.” However, what you do hear are the headlines stating “Woman Missing in Blank Park” or “Search continues for hiker/runner/camper/tourist who disappeared without a trace.” And you’re likely one of the thousands who feel for the family but blame an accident, weather, or animals on the tragic disappearance and move on.

But lately there have been other theories. A growing theory on TikTok and Reddit is spreading, perhaps these disappearances could be blamed on something else – feral humans.

The short answer: No. The claims of feral people in National Parks have not been proven or substantiated in any way.

The official definition of a “feral” is; “Wild, untamed, especially of domesticated animals having returned to the wild.” Or when used as an adjective to describe a person “contemptible, unruly, misbehaved.”

What most people are picturing is mentally insane, wild people living in the woods barefoot. Kidnapping and potentially eating the thousands of missing people. Let’s see if we can clarify the reality of what’s going on and why these myths are being perpetuated.

“At least 1,600 people, and perhaps many times that number, remain missing on public lands under circumstances that defy easy explanation,” said Jon Billman, a journalist who investigates disappearances, wrote for Outside Magazine.

It’s estimated that there are 640 million acres of federal land, this would include national parks, national forests, and Bureau of Land Management property. Each type of land is monitored and maintained in very different ways; some not at all.

For those who go in an don’t come out, it’s a very concerning issue, particularly as there is no way of knowing exactly how many people go missing. Reporting a missing person is voluntary in 40 of the 50 States, and law-enforcement participation is also voluntary.

The resources of law enforcement in each area also greatly varies. If you disappear in a national park, there are way more resources in terms of people, horses, and helicopters versus a Bureau property which would have the local country sheriff to head up the search. The state bureau of investigation or the FBI don’t get involved unless foul play is suspected and the case is likely to be a criminal one.

There was an attempt in the early 2000’s to create a database to track law enforcement cases in the lands ran by the National Park Service, Bureau of Land Management, U.S. Fish and Wildlife Service, and Bureau of Indian Affairs. But the Incident Management Analysis and Reporting System is not utilized and so flawed many branches won’t use it.

According to Outside; “only 14 percent of the several hundred reportable incidents were entered into it.”

So, what does happen to the majority of these missing people?

The majority of missing persons who are found are ruled accidents and have nothing to do with feral humans in National Parks; many die of exposure, falling, or in rare cases, animal attacks. One of the final stages of hypothermia is feeling hot, so bodies are often found in the cold with less clothing than they had on. Lost people try to climb to a high point to get their bearings and results in fatal falls.

But many people are found in previously searched areas. Kids are found extremely long distances from where they were last seen.

A popular story that is told in whispers around the campfire is that of Dennis Martin. Many years ago, on June 14, 1969, six-year-old Dennis disappeared in Great Smoky Mountains National Park in Tennessee.

He went into a bush to playfully scare his family but didn’t return. They had 1,400 people, including the National Guard and Special Forces searching for Dennis. Sadly, they never found him.

What they did find was two sets of footprints, one matching Martin’s shoes and the other barefoot. This footprint helped spark rumors that Martin didn’t die from exposure or animal attack but was kidnapped by a feral person.

When murders are committed, the news spreads far and wide. Like the fatal stabbing of Ronald Sanchez Jr. in 2019 while hiking the Appalachian Trail. I don’t think there was a single American who wasn’t invested in the hunt for Gabby Petito’s killer/boyfriend who left her body in Grand Teton National Park.

Sadly, it’s easy to Google and begin reading articles of murdered people in parks and federal lands, but one must look at this on a broader scale. Roughly 3 million people hike the Appalachian Trail each year. And in 2019, the National Census counted 140,000 people living out of vans or RV’s. That number has likely doubled since the pandemic.

Which National Park Has the Most Disappearances?

According to Strange Outdoors, statistics show that Grand Canyon, Lake Mead, Rocky Mountain, and Yosemite National parks have the highest rates of Search and Rescue (SAR). These parks are the perfect storm of having the greatest number of visitors and/or having more dangerous terrain/water. 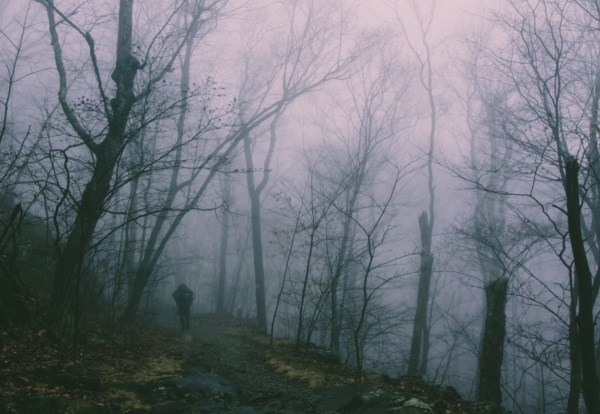 We humans love dark entertainment, as long as we are watching or watching from the safety of our homes. It’s why there are so many criminal forensic tv shows, and podcasts and documentaries dedicated to murders and other grisly acts. The idea of feral people would fall right into that fascination with the dark and unexplained.

Missing 411 is a documentary series based on the book series from David Paulides. It investigated the unsolved yet eerily similar disappearances of five children in the wilds of North America across multiple decades.

With a 6.4/10 rating on IMBD, Missing 411 is a sad, beautifully shot documentary. Many users say the connections used between the cases is more of a stretch than an “aha!”

Missing 411 – The Hunted is a similar documentary, this time focused on hunters who have disappeared. This documentary present stories and cases from hundred of years to try and explain what’s happening in the woods of North America.

IMBD users rate this documentary a 7.1/10, higher than the original film, but the reviews are more critical. Many say the premise of the documentary is a stretch, that it loses direction, and is only for the gullible.

Wild Child is a 60 Minutes Australia exclusive looking into a feral toddler raised by dogs. The little girl was abandoned and made her home with the dogs in the farmyard kennels for six years. The dogs protected her, fed her, and likely loved her. She began acting like her canine family. Eventually doctors tried to teach her to be a normal child. This special digs into this story and talk about the nature versus nurture debate.

Social media has a lot of great attributes, but all it takes is one post for rumors to spread like wildfire. In the case of feral humans in national parks, this viral post by TikTok user @jaybaebae96 made this a topic of discussion.

“In 2021, there are feral people that are cannibals living in our national parks,” said @jaybae96. “Since I learned this I have not stopped thinking about it … I will probably never go to a national park for the rest of my life because I am absolutely terrified of being eaten by a feral person.”

@heyjaybae96 #stitch with @wes.tm it might be illogical but I can’t stop #FindYourCore #SourPatchPrankFund #fyp ♬ Blade Runner 2049 – Synthwave Goose

With that post, videos are being shared all over the platform with people sharing their own experiences.

@chroniclesofolivia shared her experience at Lena Lake in Washington State, claiming she found hundreds of what she described as “humanoid footsteps”, at the top of a mountain. She did file an official report but no conclusive evidence was found. Her videos describing this experience were deleted from TikTok, but you can see them on her YouTube channel.

@thepresentbeliever claimed to hear blood curdling screams in Big Bend National Park in Brewster County, Texas. While camping with family, Ariele heard multiple people screaming in the woods, yelling things like “we’re gonna die!”, “call a ranger,” and “I love you, just know that.” Ariele and her family reported it to park rangers and police, but nothing further was found.

It’s not all doom and gloom on TikTok. There are many others speaking out asking others not to stereotype those who live off the grid or remotely. @thegarbagequeen asked that people stop spreading fear and stereotypes about people who live in the mountains.

Many of these claims have been deleted, but the rumor is out there. And since TikTok doesn’t allow links in posts, someone would have to leave the app to research and verify a claim they see. Something many users don’t do.

And let’s face it, in today’s overly civilized world, the idea of feral humans in National Parks is pretty interesting!

Do National Parks Have Cannibals?

While it makes for a thrilling story, the online chatter is humorous at best. The viral videos about cannibals and feral people in National Parks is next to impossible.

With trail cams, annual counts, and other Park measures to monitor wildlife and vegetation, there would be a lot of evidence showing images or traces of humans squatting in our national parks. If they will fine a lost tourist for eating squirrels, it’s pretty safe to bet they would seek out and find cannibals.

Federal lands have a slightly different story. Forest reserves and other large swaths of government owned lands don’t have the budget, the monitoring, or the incentive to control these large wild pieces of America. It would be a lot easier to live under the radar on federal land without dedicated rangers, administration, or large operating budgets.

We as human beings don’t like anything to be left open ended. As a society, we have improved criminal investigation methods to a point that we think everything should be solved. The fact that the dozens of crime shows and movies always end resolved doesn’t help our unrealistic expectation.

We have been so far removed from nature that we can’t accept that nature can conquer us. To try and make sense of disappearance in wild spaces, this folklore of feral humans in National Parks has taken foot because our brains want an answer to our questions. It’s time that we accept that nature still has power over us.

What really needs to happen is a better tracking and monitoring system of missing persons needs to be established. Search and Rescue methods are always pursuing improvement and we’re seeing a reduction in human errors. But its funding and information that’s needed most.

If a proper database was created, perhaps it could help others avoid catastrophe. Think about it. If you were visiting a national park and there was a website where you could see where people took a wrong turn and got lost, went off trail and fell off a cliff, ran into a bear’s den, you would be able to ensure you didn’t repeat those exact same tragedies.

Next time you’re making hiking or camping plans and a friend tells you they don’t want to go because of feral people. Tell them to put down their phone, and get outside – they certainly need it!

Is Hiking Alone Safe? The Complete Guide For A Solo Hike

Is it Dangerous to Hike at Night? (13 Safety Tips)

Has Anyone Died Hiking Angels Landing?