Nissan NV high roof vans are, on the whole, some of the least commonly converted cargo vans, especially when compared to Ford Transits, RAM ProMasters, and Mercedes Sprinters. The rather strange appearance with a smaller cargo space, less-than-vertical walls, and large engine compartment turn some people off from converting these vans.

However, that’s not to say that it can’t or shouldn’t be done! In fact, some may argue that the NV is often erroneously overlooked and that it makes a great camper van conversion vehicle. Additionally, due to lower overall demand, the price of these vans (new and used) has not been inflated the same way that other cargo van prices have in recent years.

I spoke with three different Nissan NV owners about how their camper van conversion cost, and here’s what they shared… 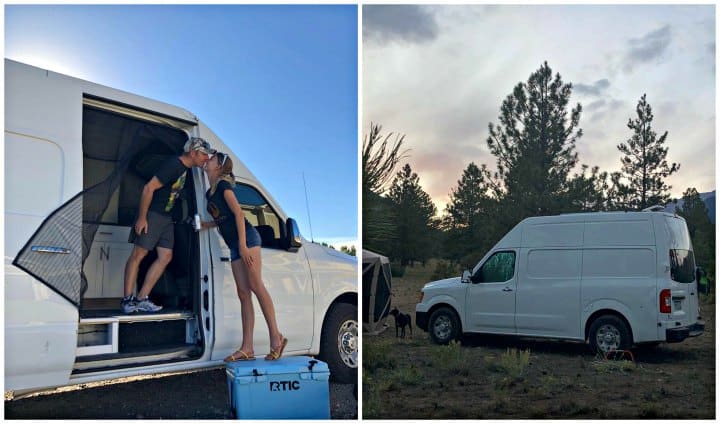 Kenzi and Jonathan (@powerline_van) did a DIY conversion of their Nissan NV named Powerline.

How did you choose to go with the NV high roof?

“The NV is really tall and often overlooked as an option when people are building out vans, so they are not in as high of demand.”

“We love that the NV is basically the size of a larger truck so we fit in regular size parking spaces and can parallel park in the city without total terror! The living space is smaller than the other high roof van options so that can be a negative. It’s also not as square as the ProMaster, making building it out more of a challenge. 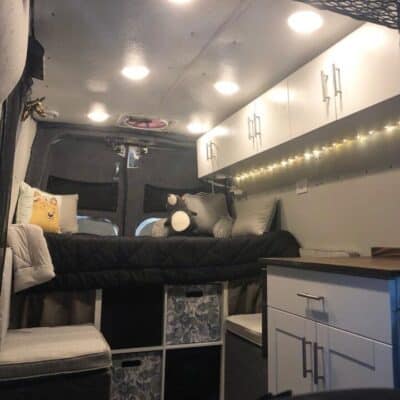 We love that it’s reliable mechanically and we’ve had no major issues with it. We’re almost at 200k miles now so Powerline has gotten around. The cab of the NV is extremely comfortable and roomy – love that. I think it’s the comfiest cab of any of the vans which is a big plus. It’s gasoline which is nice when you’re in Baja where diesel is limited and expensive.

If we did it again we would probably go with the ProMaster to have a little more living space in the back.”

“We’ve loved our Nissan NV and have been really happy with it as a van build!” 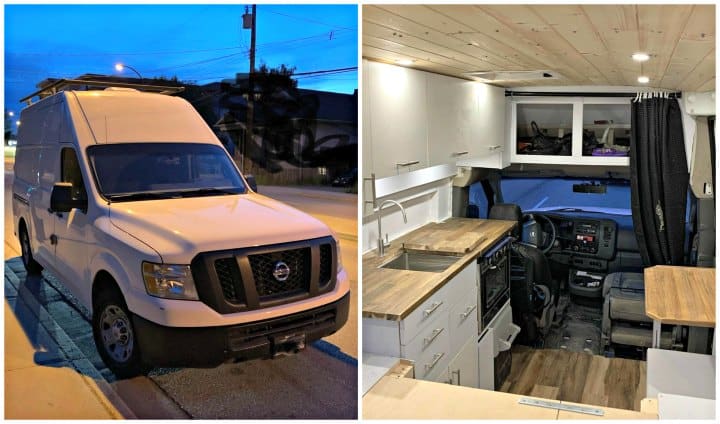 I also spoke with Seán (@sean.cau) about his experience converting a Nissan NV in British Columbia.

How did you choose to go with the NV high roof and to do a DIY conversion?

“We chose the NV high top because it was the only high top van we could afford. Used NVs are a fraction of the cost of Sprinters, and ProMasters and Transits have only been around for a few years and were out of our budget.

We chose a DIY conversion as it is always something I wanted to do and I wanted to know all the intricacies of the build, not inherit someone else’s mistakes.  We were planning a big road trip in 2020 so I had 6 months to complete the build to our needs.”

“Pros – similar size to the 144” Sprinter but a fraction of the cost. Big V8 engine is reliable and extremely easy to work on since it shares parts with the Nissan Titan. Good ground clearance, very decent on dirt roads (ours came with A/T tires which helped).

Cons – fuel consumption is an issue but it’s not as bad as we had thought. We get 15.5 mpg on longer trips, but it’s much worse in the city. We ran the numbers and expected to pay an extra $1,000 in gas per 20k km ($760 USD per 12,500 miles) when we were buying the NV versus a ProMaster or Sprinter, although this gap may have closed slightly as gas prices have come down.

We are assuming maintenance costs will be much lower than a Sprinter, but so far we’ve had no mechanical issues. Another con is that there are just not that many NVs out there, so it was hard to find ‘how to’ guides specific to NVs – there are hundreds of YouTube videos on Sprinters, ProMasters, Transits, etc. that you can follow but we often had to figure stuff out for ourselves on the NV.

There are also off-the-shelf adapters, brackets, etc. for those other models which aren’t always available for the NV.”

“I don’t think the NV should be compared directly to Sprinters, ProMasters, and Transits because they are all out of the price range of the NV (except really old Sprinters, we saw 2004 models with over 300k km for $10k). For the price we paid we would have been looking at similar-year Chevy Express-type low-roof vans.” 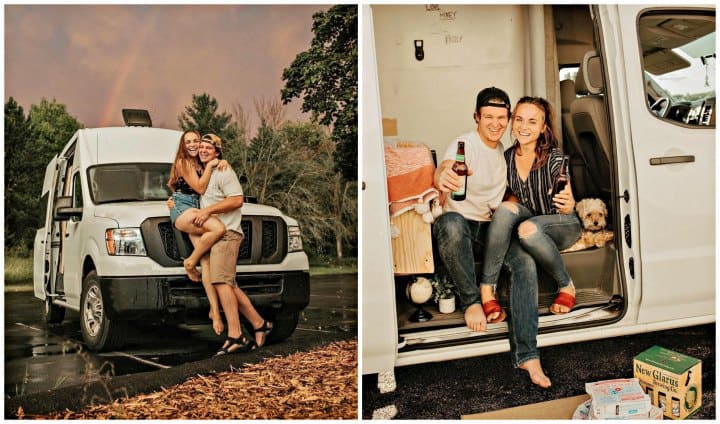 Lastly, I spoke with Brittany and Alex (@elenoratheexplora) about their NV conversion (featured photo top of article too!). They run a wedding photography business (@chasingsunsetsllc) out of their van, and here’s what they had to share:

“Our van conversion cost us around $37,000. We were lucky enough to get a loan from a credit union for the $30k van and paid for the rest out of pocket. Basic breakdown of costs: $3,000 for solar set up (batteries, panels, wires, inverter, and outlets).

The rest of the investment went to the toilet, fridge, building materials (including the hella expensive and adorable butcher block), stove top, and kitchen sink.”

How did you choose to go with the NV high roof and to do a DIY conversion?

“We started in a Honda Element and fell in love with life on the road. We knew the freedom to roam and create would forever be an integral part of our lifestyle. Why not live small so you can dream big?! Because the costs of living in a home or renting an apartment haven’t been eating away our income, we’ve been able to successfully fund a photography business.

We researched vans for over a year and were lucky enough to find this one in Dallas, TX. We are both Midwest babies and know the dangers of rust issues. She also had low miles (8,000 miles) and the three windows so we were STOKED.

We booked a one-way flight (bold choice, I know) two days later and purchased Elenora. Alex was a CHAMPION and drove her back that very same day. We knew it was VITAL to be able to stand up within whatever vehicle we would live in. The Honda Element taught us that real quick.

Doing the build on our own was a no-brainer because of Alex’s background in renovating houses with his family. He had to do intense research about the solar energy system but after countless hours on forums and within the darkest shadows of YouTube, and after massive amounts of critical thinking, he brought our dreams to life. I am eternally grateful and proud of his capacity to learn.”

“The pros are price point and engine space. It is a truck nose van so there is more room to work if mechanical situations ever arise. The price point for a five year $30,000 loan put us at payments of $550 each month. We giggle and call it our rent for the month. But, $550?! Totally manageable living costs. Especially when you consider in most lifestyles, you have a mortgage/rent AND a car payment.

The cons are space. You feel sad about sacrificing the extra space in the living space for the engine compartment. We would not choose an NV again. We would opt for a ProMaster with a wider wheel base or a Sprinter for the 4×4. When living in a van, a little bit of space goes a long way for design features. We are grateful for Elenora though, she was exactly what she was meant to be for this chapter of our lives.”

“What we would do differently is go with a higher capacity for amp hours in our batteries. We have six 125Ah batteries and would love to have more electricity freedom on overcast days. We are grateful the NV comes with a locking center console and an inverter.

This allows us to offset our electrical needs while we are running the vehicle. Also, in the next van, I would add a slider RV screened window. This would allow us to have more of a breeze on the summer nights.”

The main differences between the three classes of NVs are the engine options and payload capacity, as well as some differences in interior finishes and accessories. Only the 2500 and 3500 models have the high roof option available, while the 1500 comes only in the standard roof height which could work for a conversion, but you wouldn’t be able to stand up.

As Kenzi and Jonathan mentioned, the NVs are all gas engines with no diesel option available.

What is the MPG on the Nissan NV high roof?

You can expect to get between 10-15 mpg with an NV 3500 V8 high roof. These vans are several hundred pounds heavier than their competitors, which takes a toll on gas mileage and also increases stopping distance.

Additionally, remember that adding a bunch of weight over the course of a conversion will further reduce the overall gas mileage and increase the stopping distance. Things like road surface condition, road grade, wind, and so forth can also affect mileage over long trips in larger vehicles like a cargo van.

However, the big heavy engine does give it some oomph on the road, and unloaded it can go 0-60 mph in 7.5 seconds.

There is some controversy over the reliability of the NV. Kenzi and Jonathan as well as Seán have had no issues with theirs, but there have been reports of NVs having significant and serious problems in the event that they do break down. Then again, there are lovers and haters of almost every van out there. Plus, repairing an NV is likely to be much less expensive than if you had to take a Mercedes Sprinter to the shop.

Can you stand up in a Nissan NV high roof van?

Yes, as long as you are less than 6’5” tall. Keep in mind that adding flooring and ceiling materials as well as insulation will take away some interior height.

Up Next In Camper Van Conversion Costs:

How Much Does a RAM ProMaster Conversion Cost?

How Much is a Ford Transit Camper Van? (New, Used and DIY)

How Much Does it Cost to Put a Pop Top on a Van?

Well written and informative article. I like how you had each give pros and cons along with if they would convert a Nissan NV again.