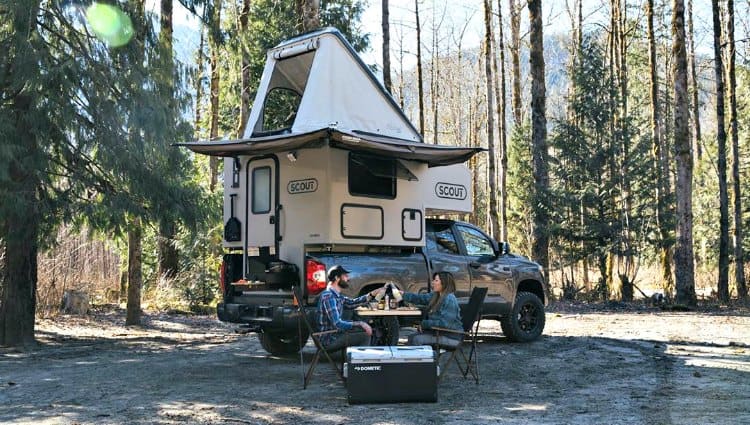 Unless you’ve been hiding off-grid for the past few years, you’ve probably noticed the van life trend taking over social media all around the world. I absolutely get it, who wouldn’t want to live a life where you can explore new places all around the world and take your home with you?

It’s certainly something that I am aiming for in the near future. However, if you’re anything like me, you might also see the limitations of van life for those looking to get off the beaten path and on to roads less traveled. If that’s you as well – a truck camper could be your solution to living the van life without giving up your off-road, 4×4 capability!

Newer to the market in this category is Scout Campers. The creators have spent A LOT of time meticulously designing this innovative truck camper to stand out from the crowd. They are unique in a number of ways including being extremely lightweight, totally off-grid, extremely adaptable with removable parts, built to last with no-rot technology and comfortable for living through all 4 seasons.

So, where’s all the Scout truck camper reviews? You may be wondering how you’ve never heard of them before but don’t worry, Scout is so new that there isn’t much talk online about them yet. If you would like to check them out in action, follow them on Instagram.

As I have mentioned, Scout does truck campers differently. They are actually manufactured by the same brains behind another top camper brand – Adventurer, meaning they know their stuff.

The aim when building Scout was to develop something totally unique, this means that while the comforts included in the camper are just as optimal as other truck top campers they may simply be a little less luxurious as weight and durability are the top priorities of Scout.

That being said, there are a number of areas where Scout soars above its competition…

The Scout Truck Campers were specifically designed with weight in mind. The original model (Olympic) weighs just 1,133 lbs while the second version (Yoho) weighs in at just 913 lbs, making it the lightest hard-walled truck camper on the market today!

Another stand out point and possibly my favourite thing about Scout truck campers is the thought that has gone into making as much of the camper as multi-functioning as possible. Components such as the table, power station, fridge, stove top and much more are built to be removable and usable outdoors. So, say no to buying multiple sets of gear for different camping scenarios.

No wood, No Rot

There is absolutely no wood used in the construction of Scout Campers and this is because they are built to last. The materials used in constructing the camper are of marine grade meaning they are the best of the best in terms of durability. Mold and rot are common problems encountered by many truck campers and RV-ers… even at the most high-end prices.

If these issues are ignored, the problems can end up in an un-usable product. With Scout, you can rest easy knowing your investment will last a long, long time.

A lot of other top truck campers rely on shore power or simply old fashioned torchlight. Scout includes a built in 160w solar panel and lithium power station and multiple outlets around the camper. This means you can enjoy all the comforts of a typical RV wherever you are.

Another neat feature is the gravity-fed water system – meaning you won’t waste that precious power on washing dishes and can instead charge you phones and cameras without fear of draining the batteries.

Sleeps Up to 6 People

While all Scout Campers’ models can comfortably sleep 4 people with their extra-large permanent bed and dinette to double bed conversion, the Olympic model comes with the option to purchase an additional pop up tent to add another double bed. This means you can easily sleep up to 6 people in the Scout Truck Camper which is one of the highest numbers of occupancy for standard truck campers.

So far, Scout has released 2 models ready for order whilst plans for a 3rd larger, more upmarket truck camper are coming soon. Each of the models come with standard features for a set base price but are fully customisable with additional extras which I will talk about later on in the article. So let’s have a look at each of the base models in more detail… 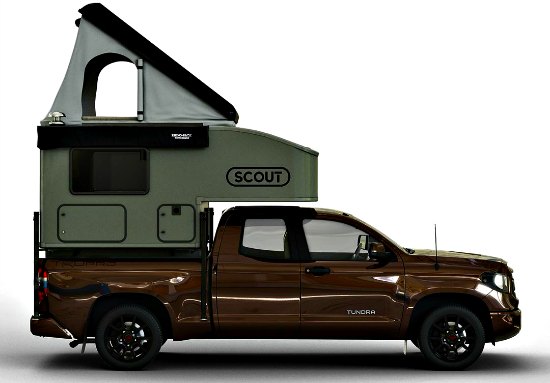 For the base price of an Olympic Scout, you will get a number of included features such as a portable table which converts into a 34” x 70” bed, 4.9 gallon water storage with filtration system, a 54” x 80” XL bed, 160w Solar panel, lithium battery station, propane tanks, moonroof and a 5 cubic foot lockable storage compartment. 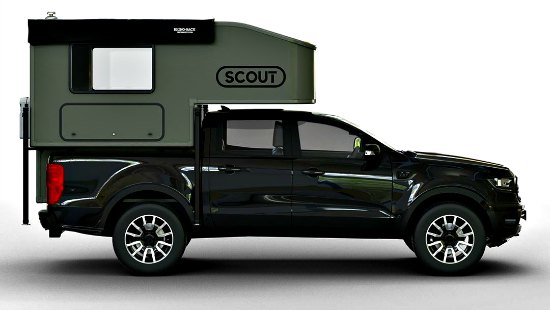 The Scout Yoho model is designed for smaller/ mid-sized trucks meaning whilst it has the same concept of comfort and off-grid capabilities, the Yoho compromises a little on a few features in order to fit a smaller case.

Retailing at $19,240, Yoho is suited to smaller trucks such as the Toyota Tacoma, GMC Canyon, Chevy Colorado, Nissan Frontier and at just 913 lbs it is the lightest hard-walled camper on the market today.

Whilst the Yoho boasts many of the same features of Olympic, due to its smaller size you will have a slightly reduced living area and smaller beds. This is not to say that they aren’t still big enough, the built-in stationary bed is still 54” x 72” whilst the convertible table to bed is 23.4” x 66.75”. The Yoho, however, isn’t compatible with the pop-up tent which I previously mentioned meaning it can sleep up to 4 people.

The largest and most spacious Scout Camper, Kenai hasn’t quite hit the market yet, however, it is going to be aimed at full-sized, half-ton trucks.

Scout hasn’t released the full specs yet but what we do know is that along with all the standard features found in their other campers, the Kenai will include a full bathroom and wardrobe plus extra exterior storage whilst keeping the weight down and utilities multi-functional.

The basic models available from Scout Campers are enough to get you on the road, however, when designing your camper it is good to seriously consider the optional extras that may make your camper even more livable. The following features are able to be added to either the Olympic or Yoho campers:

NOTE: The larger Olympic option also has the option of adding a portable heater for $488 or pop up rooftop tent for $4,680. If you chose to include all of the additional extras it will cost you around an extra $10,000 and 551 lbs in weight.

Starting at just under $20,000 may seem a little expensive at first, however, if you think of it as an investment, I believe that it is actually extremely affordable. As I have mentioned, Scout Campers are built to last with marine-grade materials and durability in extreme environments.

This means that with one upfront payment, you shouldn’t need to spend much if any more money on your camper going forward. Another thing to take into consideration is the fact that the additional extras that are pretty essential such as the cooktop are quite expensive.

If you choose to purchase the official additions remember that you can use them in many different scenarios outside of the camper meaning you won’t need to purchase doubles of things like you would if they were fixed in. Another thing to think about is that you can easily source your own lower-cost versions of the extra appliances to bring along on your camper adventure.

At the moment Scout campers are being made to order meaning there will be a wait time between ordering and receiving your camper but it also means that you can work with the team to design your perfect camper and have it customised to your truck and needs.

The campers are available for purchase through dealerships, however, if you can’t find one near you, simply contact them via their website to organise a purchase. Not in the USA? Don’t worry, Scout Campers ship worldwide!

Any Downsides of Scout Campers?

With anything lightweight, there is going to be some downsides. I honestly believe that the pros far outweigh the cons for Scout Campers. However, here are some things to consider…

If you are looking at the cost of a truck camper compared to the amount of space you get it is quite expensive. But remember, you’re also paying for the innovative design and Scout definitely uses the space to its full capacity.

This is generally not a problem if you are in totally remote places where it’s safe to dump your greywater directly onto the ground. But, if you are looking for a camper to live in full time this could be a huge problem. Remember, that in most places you can’t empty greywater straight onto the road for example.

Although the campers are extremely light for what they are, it will still add quite a lot of height to your truck. This means that if you intend to leave the camper installed at all times, you will be restricted from some spots such as low hanging trees or underground car parks.

Since your tray is now taken over by the camper, you are left with a limited amount of space to store your adventure toys. Whilst it does have an exterior storage box and of course, you can leave your gear inside the camper whilst you drive, this isn’t ideal as a long term solution if you have a lot of things.

My final thoughts and Verdict…

I honestly believe that the Scout Truck Camper is an incredible new product and a perfect solution for those who want comfort without sacrificing their off-road, off-grid capacity.

From a price perspective, Scout truck campers are most suited to those who are looking to make an investment without having to take out a mortgage. However, some of the additions such as the fridge with wifi and gas fireplace are a little over the top for me.

I feel that whilst the older RV community might not particularly enjoy it, it’s a great option for younger adventurous millennials or even families and I can’t wait to see Scout Campers help more people getting involved in the outdoor world!

Up Next In Truck Top Campers:

What is the Lightest Pop-Up Truck Camper? (8 Must-See Options)

Can You Live Full Time in a Truck Camper?