If you are new to trail running, then you may be wondering about the difference between trail and mountain running. For the longest time I thought they were the same thing and the descriptors were simply being used interchangeably.

However, there is actually some key differences between the two that are important to point out. Below, we’ll dive deeper into the subtleties of these two similar but different activities.

What is the Difference Between Trail and Mountain Running?

Trail running and mountain running stand independent of each other as separate racing activities. Trail running races include everything from a 5k race at the local park all the way to 100+ mile ultra marathons taking place primarily on hiking trails. Mountain running, on the other hand, has an internationally recognized sanctioning body that governs races taking place on iconic mountains around the world. The races hold to a specific format of primarily uphill or uphill combined with downhill.

Trail running is an activity enjoyed by people that appreciate the beauty of the wilderness. Single track, gravel roads, and any other unpaved surfaces make up trail running. As long as it is an unpaved road, the course is considered a trail run.

Most races are on manicured and established trails that are marked so runners can easily find their way. The terrain varies on the location of the race. There are technical, rocky, sandy, flat, and many other types of terrain where trail running can exist.

Mountain running has a percentage of the course that is on trails but rarely follows smooth trails; furthermore, many races are very technical. Mountain races usually happen on rocky terrain that has loose rocks, making it very difficult to run on. Most elite runners will be found walking or hiking at some point during a race. Quick reactions and strong ankles are necessary for the unstable footing involved.

Trail running has varying elevation changes depending on the course and location of the race. There are no rules or regulations to courses, so difficulty of races really depend on distance and the elevation. Race profiles can be flat, hilly, uphill, downhill, and anything in between. Most elevation profiles allow for runnable courses with some hiking.

Power hiking is a vital technique involving short, quick strides as runners put their hands on the knees. As the grade increases the strides become shorter and quicker allowing for the movement to take less of a toll on the body.

Races in alpine regions can occur at ski resorts where ski-lifts will transport runners down; therefore, these races are considered ‘uphill only’ When a race finishes where it starts, it is considered an ‘uphill/downhill’ race.

Trail races vary anywhere from a 5k to over 200 miles. There are multi-day and adventure races that split up these large numbers into multiple days as well. If there is a trail, there can be a race.

Many participants even notice that races are not always the exact distance expressed on the race website. As a trail runner, you learn to expect the distance to be somewhat close, your Garmin to usually be wrong, and distances provided are the same for all genders.

Trail running, requires some gear as you get into distances above a marathon. When participating in ultramarathons, runners will not only have their trail running shoes but also some sort of hydration pack or belt, spot trackers, or trekking poles. Depending on the distance, some races will require runners to have specific gear.

Mountain runners are not allowed equipment during an event, such as bags, sticks, ropes, or compasses. All the courses are designed and clearly marked to eliminate danger and focus on speed, so gear and equipment are not necessary.

The one piece that is important to mountain runners are the shoes. Just any pair of trails running shoes, will not work for mountain running. Shoes are vital due to the rocky terrain that can destroy people’s feet. Mountain runners need to find the right pair of shoes for the specific terrain of the race. That means practicing in shoes, and only using certain shoes for individual terrain. 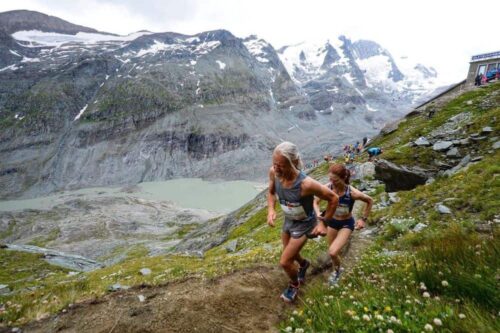 This differentiates the sport from not only trail running by sky running as well.

Currently, more than 40 nations perform at the Mountain World Championships, originally the “World Trophy,” when WMRA started in 1984. There are four continental championships in North America, South America, Europe, and Africa every year with master’s and youth events included. 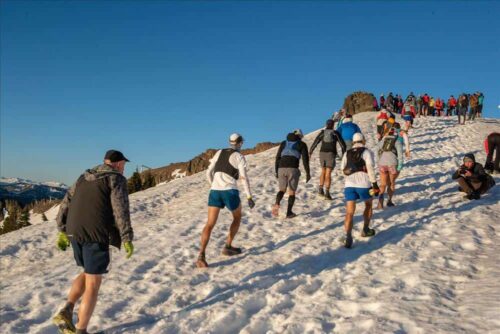 One of the most well-known trail races in the world is the Western States Endurance Run in June. This race is nearly impossible to get into and considered rugged for trail running. Participants have 30 hours to run along the Western States Trail from Olympic Valley, California to Auburn, California.

The trail has 18,090 ft in climbing and 22,970 ft of descent. The course goes through high mountains, deep canyons, and river crossings. The temperature can range anywhere from 20 to 110 degrees Fahrenheit, which means sometimes snow is on the course.

The race is considered difficult compared to other trail events due to not only the 100 miles but because of the terrain. The elevation change and varying weather conditions can shift the difficulty and can present new challenges faced by runners each year. Runners are able to run a lot of parts of the course, but power hiking is still involved even for the elite athletes. 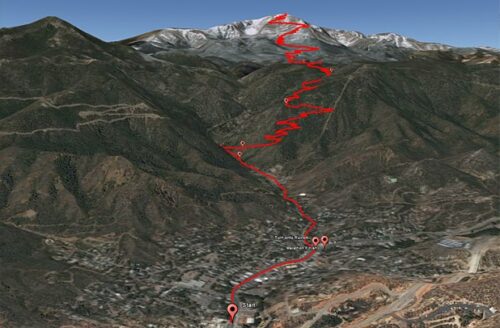 In August, the Pikes Peak Ascent and Marathon takes place. Elite runners around the world face each other each year for the coveted event. Participants summit Pikes Peak running 7,815 ft in elevation gain to an elevation of 14,115 ft.

The Ascent is 13.32 miles while the Marathon is 26.21 miles. Runners doing the marathon run to the summit and turn back how they came for a difficult descent. Racers have a maximum of 4 hours and 30 minutes to finish the Ascent and 6 hours and 15 minutes to finish the marathon. The course is tough, and the race has hard cut-off times making difficult for many runners.

There are different waves, allowing for the serious runners to start ahead for the prize money awarded to the top five finishers for each gender. With the relentless uphill, runners not only run but need to walk with intention.

Power hiking is an important skill to have uphill while the downhill also requires practice to avoid over-striding. Even though uphill might seem tougher, downhill is much more demanding on the body and over-striding can increase the stress on lower joints.

Trail running and mountain running are significantly different even though both are challenging in distinct ways. Trail running is an activity enjoyed by people that love the wilderness and has various terrains and distances. Mountain running has more procedures and regulations since it is recognized by the IAAF.

Even though the sports are separate from each other, many athletes enjoy both. Many runners that participate in mountain running also compete in trail runs. At the end of the day, both are a demanding sports that get you into the outdoors but require different skills to get you to the finish line.

What is the Difference Between Fell and Trail Running?

Why is My Running Pace Getting Slower? (top 10 reasons…)

What is a Good Trail Running Pace?