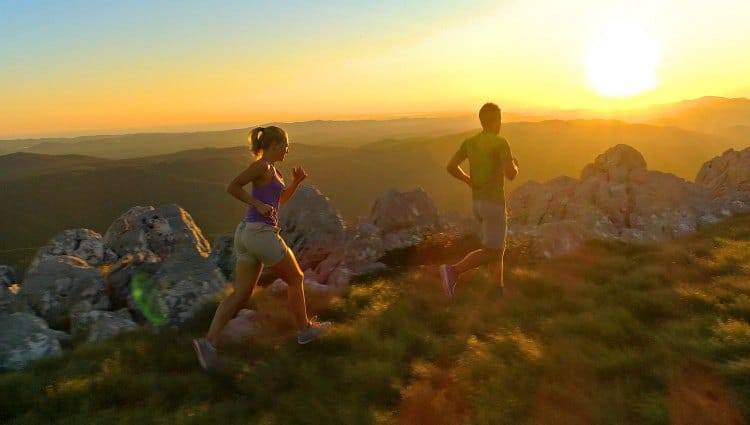 If you thought the term “running” was good enough to cover all forms of the sport – then guess again. We have sprints, marathons, road running, cross country, trail and fell running, the last two of which are similar undertakings.

So, just exactly what is the difference between fell and trail running? Trail running is normally done on existing hiking trails, and can range from fairly easy to extremely difficult undertakings. Fell running involves getting off the beaten trail, running over hills, through bogs and scrambling over scree. Fell running – which is a term more widely used in Britain – is normally done over rougher terrain than trail running and involves a lot of hill climbing.

As soon as you leave the path, you are fell running. Through bogs, heather and waist-length grass, scrambling over boulders and scree fields. In fell races, there are checkpoints that the competitors must gain, but there is no set path for them to get there. They must find their own way to the checkpoints and finishing line, sometimes involving the use of map and compass.

Trail running involves adhering to a set path, track or hiking trail, whereas fell running offers the complete freedom to explore with no set path. The reality of the situation is that there is likely to be a bit of overlap between the two different types of running.

You may begin your run on a trail before going “bush wacking” for a while, before returning to the path once more. Likewise, sometimes when fell running, it is impossible to continue without having to return to a road or path for a while (unless you are really remote).

The history of “fell” running

The word “fell”, although dated, literally means hill or high place. The first race in recorded human history was held in Braemar, Scotland.  In 1040 King Malcolm Canmore was on the lookout for a swift messenger that could move quickly on foot. In order to find him, he unwittingly invented the fell race. And then he gave the winner a great big sword, belt and purse full of gold to go with it.

Records then begin to emerge from the 19th century, in which fell running was included as a competition in local community fairs alongside other sports like wrestling and throwing the hammer (especially in Scotland).

The sport branched into two parties; the professional guides race and amateur fell racing. Today they are managed under the umbrella of the British Open Fell Runners Association.

Fell running is popular in Scotland and northern England. This is due to the fact that the sport was founded in this part of the world and because they have sufficient mountainous and rolling-hill terrain for the sport to take place.

Northern England boasts its fair share of hills, and places like the Lake District and the Yorkshire Dales are popular fell-running locations that provide stunning backdrops for your adventure.

Northern Wales boasts Snowdonia National Park and 15 peaks higher than 3,000 feet, making it another popular place to get off the trail and explore the hill tops.

This is the UK’s largest national park, and arguably the running capital of Britain. There are many paths for the trail running enthusiast to drool over, and there is plenty for the fell running fiends as well.

Under a land act introduced in 2005, the Scottish people have been given the “freedom to roam” their own country. This means that unless specific circumstances (such as public health and safety) prevent access to certain isolated areas, you can go pretty much anywhere you want to in Scotland. This is excellent news for fell runners.

Renowned for its beauty and famed for being so close to Glasgow, Scotland’s largest city, this beautiful part of the world is a fell runners paradise. There are more hills than you can count, and more running trails than you ever thought possible. There are also some awesome fell runs that connect the various hiking trails in the region. (lochlomond-trossachs.org)

As stated earlier, there tends to be some overlap between trail running and fell running, and it is no different for this excellent run from Ambleside, in the heart of the Lake District National Park. It joins roads and tracks, before heading off onto the fell over 11 miles of challenging terrain. This spectacular run involves 3,200 feet of ascents, and is a must-do if you are in the area.

To the west of the Lake District awaits this epic 11-mile route over 9 different peaceful fells. But do not take this run lightly. It involves a whopping 5,600 feet of vertical climbing, over terrain that varies between bogs, fells and grassy ridges. (ukhillwalking.com)

This is known as one of the most challenging races in Britain, taking in 7 summits with nearly 7,800 feet worth of climbing. The 17.4 mile race will take place this year in May, and competitors must carry with them a map of the race area, a whistle, compass, waterproof jacket and trousers, hat, gloves and emergency rations.

If the competitors do not have even one of these items on their person at all times, then they will be disqualified from the race, showing the kinds of conditions and areas that the runners can head out into.

The fastest ever time was recorded in 2017 by Finlay Wild, who completed the race in 3 hours and 5 minutes.

Every year on the last weekend of April, runners compete in the Yorkshire Dales over 23 miles of varying terrain. Affectionately dubbed “The Marathon with Mountains”, the Three Peaks Race has been run every year since 1954 at the oddly named Horton in Ribblesdale.

It includes 5,279 feet of ascents as runners round up the three peaks of Yorkshire:

The Bob Graham Round

This is a legendary challenge within the world of fell running. It is a 66-mile event that takes in 42 fells, involving a dizzying 26,900 feet of ascents. This is the equivalent of climbing Cho Oyu, the world’s sixth highest mountain.

The traverse of the Lakeland Fells was first completed in a 24-hour period by Bob Graham in 1932, and hence the name of the route. It has since only been completed by 2000 people – testament to how difficult an undertaking this run is.

Bob Graham’s record stood for 28 years, before being bettered in 1960 by Alan Heaton in 22 hours and 18 minutes.

If we think of people that have simply dominated their chosen sport, then names like Cristiano Ronaldo, LeBron James, Roger Federer and Tiger Woods all jump out. Kilian Jornet is that name in trail running. He has won some of the most prestigious long-distance races on earth, and holds more than a handful of world records that span a range of different sports.

In 2018 he smashed (by over an hour) Billy Bland’s record that had stood for 36 years, and was considered by many to be unbeatable. He completed the 42 fells in just 12 hours and 52 minutes, almost halving the time that Bob Graham completed the route in all those years ago.

How do you train for fell running?

If you are new to running, then it is a good idea to get in shape before attempting your first fell run. Start by running in the park before you even consider heading off-trail into the hills.

Once you are able to run for 3 miles consecutively on the road without too much difficulty, then it is time to progress to trail running. As well as the cardio training you will gain from running, it is necessary to add leg strengthening exercises to your regime. Consider including things like lunges and squats in your program, while yoga, stretching and foam rolling are all useful recovery tools as well.

Once the smaller muscles in your feet and legs have become accustomed to the extra balance and agility required, then you can attempt some trail runs until these become routine. Then, and only then, should you even consider attempting fell running.

If you are looking for a good pair of shoes for fell running, then you will probably want a pair of trail running shoes. These offer longer, thicker lugs on the outsoles which provide superior traction on a variety of slippery surfaces.

The midsoles are stiffer to provide the runner with more stability of steeper slopes. The uppers shoe be made of fairly sturdy materials to stop foreign objects from penetrating the shoe and injuring your foot. Examples of good shoes for fell running would be the Salomon Speedcross 5 and the Hoka One One Challenger ATR 5.

Trail Running Hydration Packs: What The Pros are Wearing

What is a Recovery Run? (Benefits and FAQs)