The term “flip flop” hiking is thrown around a lot in the thru-hiking community, especially on the Appalachian Trail. It can apply to any thru-hike that you do. And no, it does not mean that you hike the trail in your flip-flops, though, I’m sure someone has hiked the AT that way before.

What is a flip flop thru-hike? A flip flop thru-hike is when a hiker starts their hike at a less conventional spot to then return to complete the remainder of the trail. So, on the Appalachian Trail, instead of starting in Georgia or Maine, you could start somewhere in the middle to head north. Then, flip back to your starting point to finish the trail southbound. Flip flop hiking has been proven to offer hikers milder weather, prevent overcrowding, and makes you more likely to complete the trek.

While flip flop hiking may be deemed unconventional to some, it has a myriad of benefits. You can flip flop hike on any thru-hiking trail such as the Pacific Crest Trail and Continental Divide Trail, and we will detail those options briefly. The main focus of this article will be on flip-flopping the AT, general flip flop hiking benefits, and some frequently asked questions.

How to Flip Flop Thru-Hike the Appalachian Trail

There are a lot of great reasons to flip flop hike the AT, and one of the best is that you can start almost anywhere you like. With that, you have an infinite number of options for a flip flop hike. We will only detail four specific starting points that tend to be more efficient. Each route option will have distinct advantages, so play to your strong suites for hiking success.

We are starting with one of the most popular flip flop route options. Starting at Harpers Ferry, WV, you can either head North to Katahdin or South to Springer.

The best time to start when hiking this route is either mid-April or May. This starting time allows many hikers that had to do a late start enough time to complete the trail. Starting at Harpers Ferry also gives flip-floppers the longest window of mild weather during their thru-hike.

It is not recommended to start a northbound flip flop thru-hike from Harpers Ferry before April 15th due to unfavorable weather conditions. If you are a fast hiker, you may need to start later or further south than Harpers Ferry to avoid Vermont’s mud season, which is throughout May.

Slower hikers will want to return to Harpers Ferry to finish the southern half of the trail as soon as possible. Although the Southern part of the trail may seem like it would be warmer, there are cold weather conditions in the high mountain sections. You’ll have to endure a few weeks of hot, humid weather in Virginia, but it is worth it to skip cold weather in the mountains.

Although it is not encouraged, there is the Harpers Ferry route option that heads south first. This is most often referred to as the Southbound Circuit. Be warned that it can lead to overcrowding in some areas during the time you will pass through northbound hiking groups.

Another April start allows more hikers to finish the trail. The Shenandoah flip flop starts in the National Park with the option to either go north to Katahdin or south to Springer. Starting here, you have a more mild hiking section to start on, but you should be equipped for cold weather conditions.

When you start on this route may be determined by the National Park’s accessibility. You should wait until the park’s facilities are fully operational for resupply opportunities.

The only real downside of this route is that the first two weeks of April can see below-freezing temperatures and the occasional snow flurry. Most of the snow will have passed by the end of March, so if it does snow, it won’t stay long. Still, hikers should be well prepared to encounter winter conditions the first few weeks of their trek. 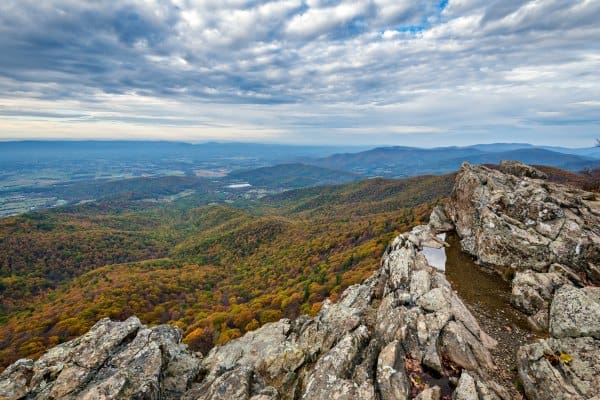 The Georgia late start flip-flop still will give you some relief from the crowds of thru-hikers if you start after April 15th. The best part about this option is that you will avoid the worst weather conditions traveling both ways. You can ensure that you won’t hit harsh winter weather or snow during the hike, and you’ll skip the worst heat and humidity of the mid-Atlantic.

It may seem weird to flip up to Katahdin, but by doing so, you give yourself the guarantee that you’ll be able to hike that section and not be snowed out.

Starting your flip flop thru-hike as far north as New York gives for one of the latest starts available. The best time to set out from Pawling, NY, is in June. You will start on a difficult section of the trail, so be prepared to get your trail legs early. The good news is that if you head north on this route, you will end the trail following the fall colors to the south.

When you are choosing a flip flop hike, you not only have to select your starting point, but you will also have to pick the direction you travel. It is most common to start the flip flop heading north. The flip flop trail routes that begin south often involve more than one flip on the trail and are best for hikers seeking more solitude.

Other than overcrowding, heading north first gives you a guarantee that you’ll be able to reach Katahdin without encountering winter weather. Although the southern sections have mountains, they will not get cold temperatures as early in the season.

Most flip flop routes heading north first give you the best of the weather and help you to avoid large groups of thru-hikers.

Where you start your flip flop AT hike will determine the best starting date. Most flip flop hikes have the advantage of starting a bit later than the traditional north bounders. For most popular starting points, you will likely begin the hike in April.

There are a few options that allow you to start your hike as late as June, though. So, flip flop hiking gives you a bit more flexibility with your start date as you can jump to different sections in different seasons.

Some hikers may not feel that they are “true” thru-hikers by choosing a flip flop hiking route. This is not at all the case. Many flip flop hikers find they’ve chosen the best possible option and the best route for successful completion of the entire hike.

The AT hiking community has embraced flip flop hiking over the years as it helps to keep the trail in better shape for the long term. They even have an annual festival for flip flop hikers now.

You see, when everyone starts the hike at the same time and in the same place, that puts a lot of stress on the trail system. With the trail being maintained primarily by volunteers, that makes it hard to keep up. So, by choosing a flip flop hike, you not only get to avoid overcrowded camping situations, but you are helping to preserve the trail as well.

Another significant benefit of flip flop hiking is the often mild weather conditions. For many of the route options, you will get to skip cold weather in the north, guaranteeing you’ll get to hike Katahdin. Plus, you won’t have to slug your way through the heat in the south, either. You will also likely miss the worst sections of bugs.

While flip flop hiking seems to be more widely accepted in the AT thru-hiking community, it has begun to gain popularity on other famous trails like the Pacific Crest Trail and the Continental Divide Trail. As a focus of trail restoration and preservation is coming into focus with the larger influx of hikers each year, it is no wonder more flip flop hiking options are arising.

The most popular way to flip flop the PCT is to start in the Sierra Nevada mountains of California. Just this year (2020), there were new PCT permit regulations released that somewhat limit hiker’s ability to flip flop in the Sierras, and you may need to reapply to continue hiking. For permits on the PCT following unusual itineraries like a flip flop, you will have to call the permit office for more detailed information.

The CDT has a much easier flip flop culture to fall into than the PCT. Most CDT hikers choose a flip flop thru-hike to avoid as much snow travel as possible. There are three popular ways to flip flop on the CDT.

Here’s a video showing what you can look forward to at Cumbres Pass:

How Crowded is the Appalachian Trail?

According to the Appalachian Trail Conservancy, the AT sees an average of three million visitors per year. Most of these numbers account for day hikers and backpackers on short treks. For thru-hikers, the southern section of the trail will be the busiest when you start. There were an estimated 3,300 thru-hikers that started at Springer Mountain, Georgia, in 2019.

What Does NOBO/SOBO Mean in Hiking?

What Does “Thru-Hiker” Mean?

Sometimes referred to as end-to-end hiking, thru-hiking is when a hiker completes an established end-to-end trail or long-distance trail with continuous footsteps in one direction. The Appalachian Trail Conservancy defines a thru-hiker as anyone that completes the AT within 12 months.

What is the Thru-hiking Triple Crown?