The Appalachian Trail twists and turns for 2,190 miles through 14 states from Georgia to Maine. And it has become so popular that 3 million people a year step foot on it, in some form or another. But just how dangerous is hiking the Appalachian Trail, and what are those potential dangers? In this article we look at the risks involved in undertaking the most famous thru hike on the planet.

There is an element of risk involved every single time you head outdoors for an adventurous activity. It does not matter what it is. Although relatively safe, the same is true for hiking the Appalachian Trail. We will cover the various animals you are likely to encounter on the trail below, and the likelihood of one of them harming you.

So, just how dangerous is hiking the Appalachian Trail?

First, we should cover ticks – as tick-borne diseases pose the largest risk to human health while hiking the Appalachian Trail. There are numerous species of tick in every single state the trail passes through, and the most common disease they carry is Lyme disease. You can minimize the chances of succumbing to this disease by wearing clothing that has been treated with permethrin, or by carrying an insect repellent with around 30% deet.

Other potential dangers on the trail come from getting lost, lightning strikes and from falling trees.

The most difficult sections of the Appalachian Trail

This is a bit of a subjective one, based upon different hikers, their experience and prevailing conditions at the time of the hike. For instance, a steep section in good, dry weather may not be too difficult. Another hiker on another day may attempt the same section in atrocious, wet and slippery conditions, meaning that their perception of that section will be different.

That aside, there are some definite sections worth mentioning for their difficulty, no matter the conditions on the day. The White Mountains fit the brief, and the weather can be notoriously difficult to predict here as well. The trail takes in the 6,289-foot summit of Mount Washington, heading up and down for about 100 miles of tricky, steep and rocky terrain.

Another tricky section appears in the form of Baxter State Park and the ascent of Katahdin, the longest continual ascent on the whole trail. You will also be forced onto some not-so-hot sections of eroded trail with high exposure. A simple slip here can mean the difference between finishing your hike or having to take a medical evacuation chopper.

Murders on the Appalachian Trail

There has been a total of 12 murders on the Appalachian Trail since it was formed over 80 years ago. The first did not occur until 1974, when a man was killed in the Chattahoochee National Forest in Georgia.

The latest killing happened on the 11th of May, 2019, when a deranged man attacked a group of four hikers with a knife. One man was killed, a woman was near-fatally injured while the other two escaped unharmed.

There are also the rumors of feral people in National Parks. However, most missing people are due to accidents and not murders.

Dangerous animals in the Appalachian Mountains

The chances are good that you are going to stumble across a black bear or two while on the Appalachian Trail. You are going to pass through some areas (particularly in Georgia, Pennsylvania and New Jersey) where there are large black bear populations.

While these species of bear are generally timid around humans and tend to avoid confrontation, there are some things you should be aware of for your own safety.

Do not move through the forest in ninja stealth mode. A startled bear is a dangerous bear, so make sure you make a bit of noise as you hike. Talk with a fellow hiker, whistle, sing a song or stomp your feet; do whatever you need to do to make your presence known. If you come across the mother bear with a cub, then calmly get the heck out of there.

Black bears will generally want to eat your food. Not you. So, avoid any possible confrontation by storing your food properly. This can be in bear canisters or in the storage lockers provided – or by hanging a bag properly in a tree.

If you are still being kept awake by the prospect of a bear attack, then maybe it is time to invest in some bear spray. We covered everything you need to know about bear spray here.

Although you may hear a pack of coyotes calling at night (accompanied by horrified tingles down your spine), they do not represent any threat to humans and will keep to themselves. You should be far more concerned with snakes.

Also read: What To Do If You See A Coyote While on the trail

Although snake bits are exceedingly rare in the US (and death by snake bite is even rarer still), it is still important to know what to do in case you come across one of the lethal species. Snakes will normally only attack a human if they are provoked. So, if you see a snake, leave it alone and it will go away by itself.

Another common cause of snake bite is human unawareness. If you are mindful of your surroundings at all times, then you will be more likely to notice a snake crossing your path. If you are in rattlesnake country, then it could be a good idea to remove your earphones. That rattle is a warning that you have gotten too close. It is not a good thing if you fail to hear it.

Are there grizzly bears on the Appalachian Trail?

There are no grizzly bears on the Appalachian Trail. Even before the arrival of humans in America, grizzly bears did not populate the eastern side of the continent. Even in the late 19th century, the furthest east the grizzly bears were found were the present-day states of North and South Dakota, Nebraska and Kansas.

Can I carry a gun on the Appalachian Trail?

You are only able to carry a gun on the Appalachian Trail if you have all the correct paperwork with you for the relevant jurisdictions. This includes concealed weapon permits that are valid or recognized in all the 14 states through which the trail passes. Then to make things even harder, you will need to be aware of the different federal gun regulations relating to the different national parks.

So, it can be very confusing about whether or not you are fully cleared to carry your firearm on the trail with you. As we have already mentioned, the AT tends to be a lot safer than inner-city environments, and you will likely not need to take a weapon with you. Even the Appalachian Trail Conservatory implore you not to take a gun when thru hiking the AT.

As well as being against the ‘spirit’ of hiking, carrying a gun can alienate you from your fellow hikers. It adds extra weight to your pack, and as a thru-hiker, you are going to be scrutinizing every single ounce you take with you.

Should you hike the Appalachian Trail alone?

As long as you are competent and confident in your own abilities, there is no reason at all why you shouldn’t hike the Appalachian Trail alone. It can be an incredibly rewarding experience, completing a thru-hike, knowing that you have done it all by yourself, under your own steam.

Sometimes the completion of such an undertaking can be a life-changing experience, giving people the confidence to go about their lives in a more determined manner.

You may also find it quite difficult to find a partner for a thru-hike. It involves being off the grid for months at a time. It can take up to 7 months of your life to complete the Appalachian Trail, and there are not a whole lot of people out there willing to sacrifice that much of their lives to a hike. It may not be a case of: should you do it alone. You may not end up with much of a say in the matter.

It is almost impossible not to make friends on the trail. You will spend time hiking with people you have met, and there will be other groups around the place. If you naturally gravitate toward these people because it feels safer, then by all means do so.

If you meet someone that makes you feel uncomfortable on the trail, avoid engaging them if possible. Be polite if you have no choice, and then put as much distance between them and you as possible. If you feel threatened, try to connect with another group of hikers as quickly as possible. Be vigilant, and do not share your plans openly with strangers. 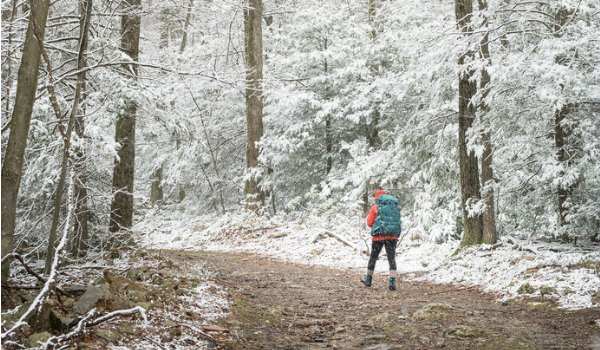 Is it safe for a woman to hike the Appalachian Trail alone?

The answer to this question is similar to the one above. As long as you are competent and confident in your own abilities, there is no reason why a woman should not hike the Appalachian Trail alone. Both women and men will be subject to the exact same dangers out on the trail, and their ability to deal with such things is not determined by a hiker’s gender.

Often the biggest hurdle a female hiker has to overcome is mental. It is an old perception that it is not safe for women to be alone, but there are countless adventurous women who hit the trails everyday as solo travelers. If you read some of their stories, it just may inspire you to do something similar.

Final thoughts on thru-hiking and safety…

As long as you are careful, there is little danger associated with animals on the Appalachian Trail. The odds of being killed by another human is far less than in metropolitan areas. The biggest dangers on the trail are associated with a hikers (limited) ability, or in their absence of preparation.

To be out on the trail without navigational equipment or expertise, and to be inadequately prepared for rapid changes in weather are the biggest dangers you will face (along with ticks, although preparation takes care of them as well!).

Up Next In Appalachian Trail and Thru-Hiking:

How Long Does it Take to Walk the Appalachian Trail?