Running a marathon is no easy feat. Long held as the gold standard in distance running, completing a marathon is a must-do on most runner’s bucket list. But, if you’ve never run a marathon before, the idea of covering 26.2 miles in one go can be daunting, to say the least.

Okay, first things first, how long does it take the average runner to complete a marathon? It turns out that your general fit runner can usually complete a marathon within four and a half hours (4:30:00). Of course, this finishing time varies tremendously based on the runner’s fitness level and age, but that time is a good benchmark for most runners.

What is a respectable time for a marathon?

When it comes to running a marathon, any finishing time is a good one. Everyone who tries and completes the race has made a significant accomplishment, but as racers, we understand that you want to be competitive and do your best.

In general, the most elite marathon runners finish between 2:02-2:10 for men and 2:15-2:25 for women. As you can see, this is over two hours faster than the average finishing time, so it’s not really realistic for most of us.

If you do a quick calculation, you’ll find that, based on an average finishing time of around four and a half hours, most people run marathons at a pace of just around a ten minute mile. A ten minute mile is a pace of about 6 miles an hour (approximately 9.65kph), which is pretty steady going for a 26.2 mile race. As with race finishing times, your personal marathon pace will vary greatly based on your own fitness levels.

For the most part, people’s marathon times slow down as they age. Somewhat unsurprisingly, the fastest finishing age group on average is the 0-19 year olds who tend to finish in just under four hours and twenty minutes (4:20:00).

However, it’s worth noting that the 40-49 age group is the most popular and largest group which means it has more of a likelihood for outliers that can sway the average. Here are the average times by age group:

However, it’s important to note that one’s marathon finishing time usually improves the more you compete. Since much of the challenge is mental for first time runners, the confidence to know that you can, indeed, run 26.2 miles makes a difference for your finishing time. So, don’t be discouraged if you don’t run your fastest during your first marathon – you can always run again!

As runners, we love to know about world records, so here are a few to get you inspired for your next race…

The world record for the fastest marathon time on a record-eligible race course is currently held by Eliud Kipchoge of Kenya for his 2:01:39 finish at the 2018 Berlin Marathon. If you’ve got your calculator handy, you’ll know that Eliud ran an average pace of 4:38.4 per mile for the entirety of the race.

Oh, and just so you don’t think Eliud ran away with that world record, the second fastest men’s time is held by Kenenisa Bekele, who ran for a time of 2:01:41 in the 2019 Berlin Marathon. Kenenisa’s pace was just 0:00:01 slower than Eliud’s record. That’s cutting it close!

The current women’s record is 2:15:25, a time that was set at the 2003 London Marathon by Paula Radcliffe of Great Britain. Paula ran an astonishing 5:09.9 average pace for the duration of the race to take home that coveted title, which has stood uncontested for over a decade and a half.

If you’re worried that you’ll be the slowest person to ever finish a marathon, you’ve got some stiff competition. Shizo Kanakuri currently holds the world record for the slowest ever Olympic marathon, completing the race after 54 years, eight months, six days, 5 hours, and 32 minutes.

While Shizo didn’t run for that entire 54 year period, he did collapse during the 1912 Olympics, which were the first time that any Asian nation had ever sent athletes to compete. The race itself was held on an incredibly hot day and runners collapsed at an unbelievable rate.

Out of the 68 runners who started the race, only half finished that day – one, Franciso Lazaro, even died as a result of the race. But, unlike all of the other runners who didn’t finish the race that day, Kanakuri never reported his DNF to the officials and was instead listed as “missing.”

After Swedish authorities discovered that Kanakuri was indeed alive some 50 years later in 1967, they invited him back to finish the race at the age of 75. 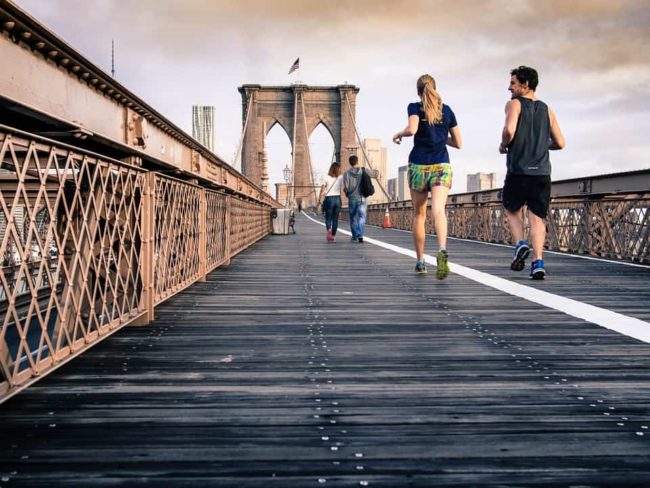 How long does it take to train for a marathon?

Training for a marathon is no easy feat. Running such a long distance takes a lot of practice to avoid overuse injuries and burnout. However, most people who set their minds to it and commit to training can, indeed, run a marathon.

For the most part, experts recommend that you train for upwards of 3-5 months before the race you’re looking to run. However, most marathon training plans assume some base level of running fitness, so if you’re new to running, you’ll want to get a few months of three-to-five times per week base mileage under your belt before you commit.

After about 6 months, even a beginner runner can be ready to run a marathon and get a respectable time. Of course, the more time and effort you put into your training – and the more dedicated you are – the better your results will be!

Estimating a marathon pace is pretty tricky, especially because of the mental aspects of running for so long. But, there are a number of calculators out there on the internet that can extrapolate your running pace over 26.2 miles by using previous finishing times from 10km and similar length races.

These won’t be as accurate as the real deal, but they offer a good baseline. This one from Runner’s World is one of our favorites.

Up Next In Running:

How Many Hours of Sleep Should A Runner Get?