When you are buying a new recreational vehicle the future costs of owning it can depend a lot on the fuel it uses. So, what type of gas does a RV use is a question you should have answered and understood.

The gas-powered RVs use unleaded gasoline or ethanol mixes, depending on the engine. Manufacturers’ recommendations can vary and it is very important that you follow them.

So, let’s get into more of the details, and matters such as the advantages and disadvantages of all gasoline types.

What Type Of Gas Does A RV Use?

RVs can practically run on any type of gasoline, the exact type is depending on the particular design of the engine and its manufacturer’s recommendation.

Because it is mandated that all gasoline sold in the US must be unleaded type, it can be said that the gas-powered motorhomes run on it. Though they can also run on ethanol mixes.

The most important thing is that you pour the proper gas in your tank, and proper is the one that the manufacturer recommends.

How To Find Out What Gas My RV Uses?

To find out which gas your motorhome uses you just need to look up where it is written. The spec sheet of your motorhome and user manual is where you can look it up. 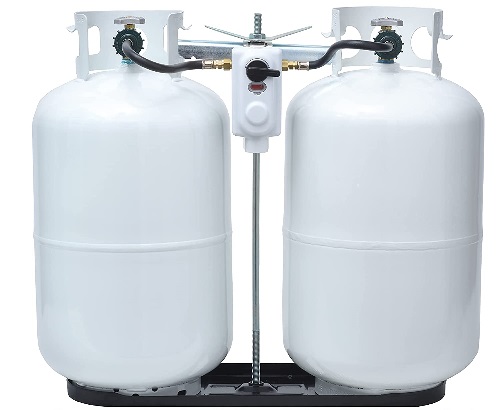 But, the easiest way is to check at the spot you must look at every time when refueling, the inside of the gas tank cover.

There are three types of gasoline according to their octane number. This number describes how much is some fuel resistant to self-igniting due to pressure.

Regular gasoline has the octane number 87, and it is the most common and most widely available type of unleaded gasoline. It is appropriate for all older RVs, and the vast majority of the newer ones.

But, it is not good enough for some engines that have high compression ratios, and using it can lead to engine knocking.

These are rather uncommon gasoline, but you can see a pump that has from time to time. It most often has 89 octanes, but it can range from 88 to 90 octanes. It is more resistant to self-detonation when compressed than the regular.

Using premium gases is required for some newer RVs, because of the high compression ratios their engines have. Lower octane gas can easily cause engine knocking which will damage it.

Besides the unadulterated gasoline, on the market, you can find several gas types that are mixtures with different concentrations of ethanol.

This allows for the fuel to burn at higher temperatures, making it more complete and thus producing lower emissions. Depending on the type, either some or all RVs can use these types of gasoline.

Depending on the concentration of the ethanol, this type of gas can lead to issues with some older engines. 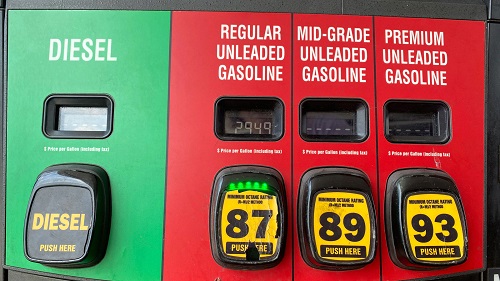 Ethanol is a relatively strong diluent, so it can literally dissolve various gaskets on older RVs because they are not made of resistant materials.

You should never use ethanol mix with higher than recommended concentration, but lower can sometimes be safe.

Despite popular belief, E10 gasoline does not contain exactly 10% of ethanol. Instead, it can have anywhere between 6% and 10%. All of the RVs manufactured from 2001 and later can use this gas with no problems and do not require any modifications.

The E15 can have an ethanol concentration between 11% and 15%, which is where problems with the engine and fuel system can start if various parts, gaskets, and O-rings are not made of resistant material.

Many new motorhomes have engines that can use it, which can also use the E10 too.

The motorhomes that can run on this gas always have the so-called Flex-Fuel engines, which can also run on pure gas and E10.

RVs that come with a gas engine have some advantages over other types of fuel. First is the lower upfront price, gas engines are cheaper to manufacture.

But also repairs cost less than other engine types. Gasoline engines have always been more popular, so replacement parts are more available. And for the same reason, the gas has higher availability at pumps.

But, if the gas were a perfect fuel other types wouldn’t have to exist, and these engines have some drawbacks.

The first is lower torque than comparable diesel engines, which in turn means that higher RPMs are needed for the same work. And higher RPMs produce a higher fuel consumption.

Also, ethanol mixed types of gasoline are bad for some older engines, unless they are modified for it. Using higher than recommended concentration will damage engine and fuel system components. While using lower can lead to knocking.

Besides the gas-powered motorhomes, there are two more gas types. The first is diesel-powered, they are the most common alternative.

These are generally more expensive engines, which can be seen on the price tag of the RV, but have better fuel economy which is often negated by a higher price in the US, in the rest of the world diesel is cheaper than gas.

Diesel engines also have higher torque, so motorhomes with them can be bigger.

RVs can be equipped with LPG-powered engines, which are for all intents and purposes just converted gas engines.

This is the same propane as in your propane bottles, but though it is popular in the rest of the world, it is not in the states. Also in the US, it is more expensive than gas, which makes it even less economical than just lower fuel economy does.

What type of gas does a RV use can have some implications on your choice of a motorhome. But to have the best RVing experience and lowest expenses and avoid problems caused by improper fuel, you should always use the manufacture’s recommended gasoline type.

What is LP Gas in an RV?

What Class-B RV gets the Best Gas Mileage? (Top 4 Picks)

What does RV hookup mean?