If you are looking for suggestions on when and where to hit the road this coming summer – the answer is simple: Anytime. Anywhere!

The US and Canada are wide open to RV travel adventures of all kinds. From two-week trips where you hit a few parks, to three-month excursions across the continent. There is much to see and each region is unique in its offerings. And while serendipity is half the fun on any adventure, a little planning ahead of time will help you identify places you won’t want to miss. Here are some suggestions.

Planning Where to RV during Summertime

As an avid hiker, I don’t leave home without a map, a compass, and a bona fide trip plan. However, I give my wife credit for plotting our epic adventure route. She used several online route planning sites, which recommended things like the “Best route to see all 48 states”, or “How to see all the National Parks”.

The options are numerous, and if you’re into seeing the largest ball of twine in every state, there’s likely a route for that too.

Begin by asking yourselves: how much time do we have and what do we want to see? Make a top 100 list for each of you (kids too), then get together and see where it aligns and where you might have to choose.

Plot your “must-see” sites on a map and link them together with a fun route. Mix it up with natural areas, historical sites, and unique destinations.

We adapted our chosen route based on the states we had not seen, parks we had not visited, family we hoped to see, and a few unique destinations we each chose. As an Architect, I chose Fallingwater in Western PA, while my Engineer wife requested the Houston Space Flight Center and Napa. (We loved them all, but if you’re in Northern California, definitely take time to sip the grapes!)

The kids wanted to surf in Malibu. I mean, who wouldn’t!? Spoiler alert- Malibu was fun, but the weather and surf did not cooperate. So, the next day we stayed in Pismo Beach and had a great surfing experience in a lovely, small coastal town. CA surfing: Check!

We made a loop of the entire country beginning in the top right corner where we live in Coastal Maine.

We tried to touch every state, but had to make some concessions.

Thus, we missed some central states like Missouri, Kansas, Oklahoma and Kentucky. In the end, our route looked like a bagel with a bite taken out of the top. (That pesky North Dakota!)

Starting in southern Maine we followed the Appalachian Mountains south through NY, PA, MD, VA, and TN. We then wound our way to Atlanta, Memphis, Little Rock, Natchez, and New Orleans, before turning west through Texas, New Mexico, Arizona, southern Colorado, Utah, Nevada and into California.

We drove up the west coast from LA to Seattle, sidestepping to see Yosemite and Sequoia. From Seattle we headed back east through Idaho, Montana, Wyoming, South Dakota, Minnesota, Wisconsin and Michigan, dipping into Colorado, Nebraska and Iowa. We then completed the journey beneath the Great Lakes and up into Vermont, New Hampshire and finally, home in coastal Maine. Whew!

For planning purposes, we had a basic route/timeframe and made our reservations about a week in advance for each site. This gave us the flexibility to adjust our plans, but also meant we did not have prime campsite choices and were always staying outside of the National Parks. 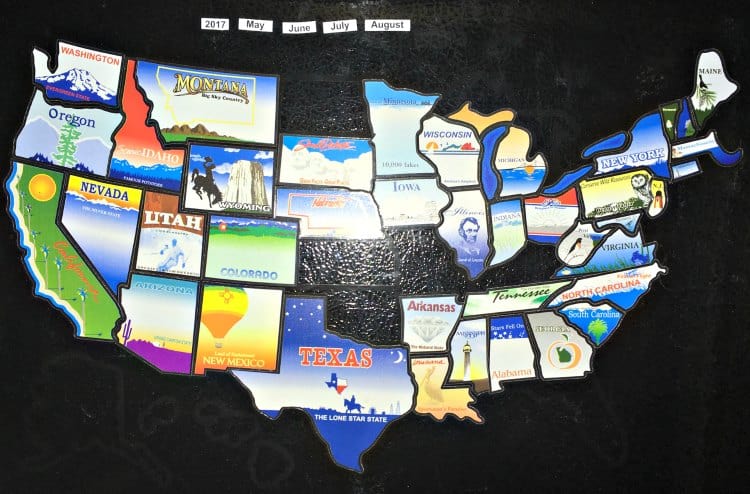 All the states visited on our grand adventure!

This was our trade-off. You never know when you want to stay an extra day or two in a special place, which will have a ripple effect on your future reservations. However, if you are set on staying inside a particular Park- make that reservation months in advance and work around it. Some Parks, like Yellowstone, are huge to begin with, so staying inside can save valuable time, especially with eager kiddos in the back seat.

(Note: Many NPs limit the size of RVs inside the parks.)

Also, how long are we willing to stay in each place? We did what RVers call “sprinting”, where we tried to cover a lot of ground, spending only a couple of days in each place. The advantage is you get to sample the entire country, but if you find a magical place you may need to crop your schedule to spend more time there.

You’re also beholden to the weather, so if it’s pouring in Yellowstone and those are your only three days, that kind of stinks (especially for kiddos). However, the bison don’t care if it’s raining, neither does Old Faithful, so pull on the wet weather gear and make the most of it.

Only have two weeks?

No problem! Here are some really awesome routes to consider.

Glacier-Yellowstone: It’s a long but beautiful drive between these two epic parks. Make time for the Tetons, too. You won’t regret it.

Rocky Mountains: This can be its own trip, or combined with southern CO parks. Or if you’re heading north, Yellowstone/Teton.

Northwest: Rainier, Olympic, North Cascades. Swing by Seattle for great vibes and coffee. If you have time, zip up into Victoria, British Columbia. (Bring passports!)

Great Smoky Mountains-Blue Ridge: Consider driving through the Smoky Mountains, then up the Blue Ridge Parkway into Shenandoah. Gorgeous driving and hiking. Sidestep into any of the historic southern towns for history, culture and great food.

Northeast Mountains: Great place to explore the outdoors! Acadia NP (one of the Country’s most visited) is a candy land of outdoor activity, right on Maine’s picturesque rocky coast. Afterwards, head over to the White Mtns of NH, the Green Mtns of VT, or NY’s Adirondacks. You won’t regret it. If you like hiking above tree line, make reservations in the famed AMC huts on the Presidential Range.

Highlights from Our Trip

In addition to the major National Parks and sites, here are some of our personal favorites: 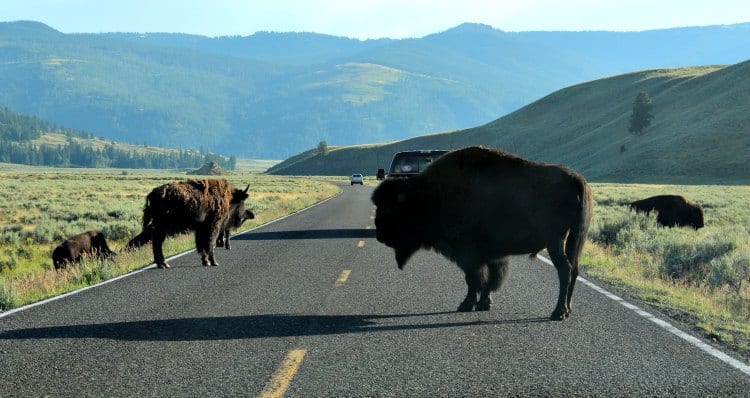 This depends on your available time frame and your destination(s). Summer is the prime time for RV travel, and just a great time to be outdoors. The kids are out of school and the weather is amenable to camping (ranging from warm in the north to brutally hot in the south/southwest.)

National Parks and tourist sites will be fully up and running in summer, however, you will deal with more crowds. (Reserve your RV/campsites early and often!)

We traveled from late May to mid-August, taking our kids out of school (more on this in a moment) and returning before the next school year began. We started in the Northeast (Maine) and made our way south and to the southwest by late June. We spent July on the west coast and returned across the top of the US by mid-August.

This approach gave us cooler months in the south (less humid), which was nice, but we still found Texas and New Mexico surprisingly hot by Mid-June. I hadn’t felt heat like that since serving in Iraq! But not to worry, the depths of Carlsbad Caverns will greet you like an oasis.

You could choose to follow the weather, too. The shoulder seasons like Spring and Fall are great, you will see fewer crowds and most Parks are fully staffed by May and well into October. Spring in the south/southwest is a lovely time.

Start in the southwest and work your way through the south before it’s too hot, then turn north later in the season. Likewise, fall in the northern latitudes is just gorgeous. Great foliage colors and excellent sleeping weather, and it’s still warm enough to enjoy the outdoors without too much trouble.

Keep in mind, if you are starting in spring, some of the northern parks may still have snow/ice in the higher elevations, so seeing them later in your trip works well.

Taking the Kids out of School

If you’re trip eclipses the school year, don’t let that stop you. In the spring of 2017, we took our two children out of school and set out on a three-month trip around the country. We spoke with our teachers and administrators well in advance and got both their blessings and advice. They saw the educational value of such a trip and were very supportive.

We were advised to miss the end of the school year (May-June), rather than the beginning (Sept) when students are reviewing past material and establishing routines. And if your school year happens to start in August – just leave earlier!

Wherever you go, and for however long, you will have an amazing experience. And when you roll safely into your driveway weeks or months later, it will be bittersweet. Despite all the ups and downs of long-distance travel, when our tears dried, we all agreed: Let’s go again. And someday we will.

Up Next In Adventure Vehicles:

What are the Smallest Class C RVs?

Exploring New Zealand in a Campervan – What You Need To Know