Millions of tourists visit our country’s national parks from all over the nation and the world. Most people venture out during the spring and summer months. Not nearly as many people visit these parks during the winter, but there are many reasons to make the time to. The winter adds an extra magic to these special places. When draped in white, landscapes and wildlife appear more majestic.

There is so much to learn about our world during the winter, just as there is during other times of the year. Take advantage of the visitor’s centers, ranger programs, and even become a junior ranger (a program for individuals of all ages) while learning about the beauty of our national parks in the winter. Some parks even offer classes in geology, natural history, photography, and even fly-fishing.

Here’s our list of the best national parks to visit during the winter:

Sequoia and Kings Canyon National Parks border each other, and it is impossible to visit one of these parks and not the other. With more than a million acres to explore of the southern Sierra Nevada east of the San Joaquin Valley, there are vistas, historic sites, short hikes, longer hikes into the parks’ depth, and many treasures to see.

Treasures include the sheer size, beauty, and diversity of the mountains, foothills, canyons, caverns, and forests at elevations ranging from 1,270 feet to 14,494 feet.

Sequoia National Park is the second oldest national park in the United States (Yellowstone National Park being the country’s first designated national park). It was established in 1980 and rightfully so. Many of the grandiose trees were just saplings in B.C. These trees are thousands of years old. They are unbelievable in size, both height and width, but are the largest in the world by volume.

A winter visit here provides undisturbed winter views and some solitude with General Sherman Tree (the largest tree on earth). And a gorgeous opportunity to gaze at the winter night sky, with absolutely no light pollution. 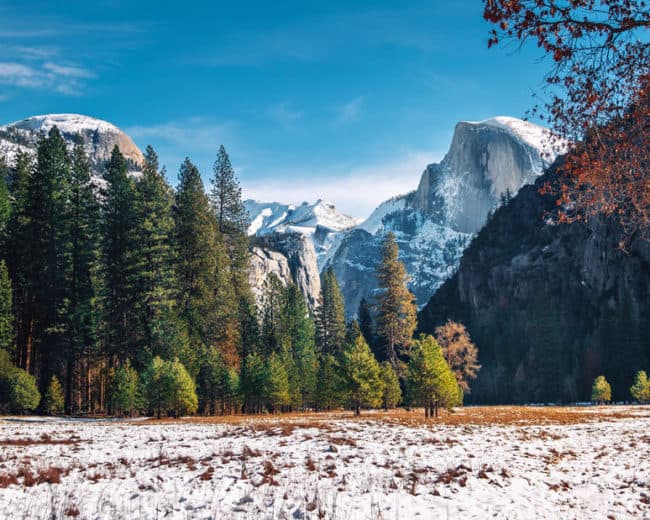 Yosemite National Park is a must-see park at all times of the year. In winter especially, the contrast of the grey and brown rock faces with the pristine white snow, icy waterfalls, and frozen streams are breathtaking. The park offers deep valleys, grand meadows, and ancient giant sequoias.

Experience the towering Half Dome, Inspiration Point, and Bridalveil Fall during a cool winter morning. Hike the trails, fish at the Merced River, and enjoy your time in Wawona and Yosemite Valley. In the late spring, before the crowds hit, take advantage of the empty roads and tour the winter park on bicycle.

Also read: How Do I Spend a Day In Yosemite?

Make time to visit Yosemite Ski and Snowboard Area to ski, snowboard, cross-country ski, and tube on California’s oldest downhill skiing area. The valley is a timeless imprint of the power of glaciers. It is unforgettable to witness the tranquility of the High Sierra.

Death Valley National Park is one of the largest national parks in the country. It is most commonly visited during the winter, as it is too hot during the summer months. Temperatures easily reach 120 degrees in the summer months and it holds the record for the world’s highest air temperature at 134 degrees.

It is the hottest, lowest (the basin is below sea level), and driest (due to a steady drought) location on Earth. Because the parks peak season is the winter, the best time to visit will be November and December. Activities to do in the park include hiking, canyoneering, and legendary stargazing under one of the biggest skies in the country.

The park is home to ecosystems ranging from snow-covered peaks to sand dunes. The rare winter rainstorms encourage the famous wildflowers to come into bloom between mid-February and mid-April. Experience lush oases, which are home to tiny fish and provides a refuge for resident wildlife. This is a must-see park.

Note: Rangers have closed Scotty’s Castle until the fall of 2021 due to flooding in the Grapevine Canyon from a severe thunderstorm.

The Carlsbad Caverns National Park is a unique experience to see high ancient sea ledges, deep rocky canyons, flowering cactus, and desert wildlife. The park consists of more than 119 caves full of stalactites, lily pads, and cave pools formed when sulfuric acid dissolved limestone which left behind these caverns of all shapes and sizes.

The internal temperature of the caves stays constant at 56 degrees throughout the year, even while the winter temperatures drop. This park is home to the largest single cave chamber by volume in North America called the Big Room. Visiting caverns is a unique experience and a view into the world under the Earths’ surface.

For those who have never experienced it, this is a great park to have high on the visit list, anytime of the year. 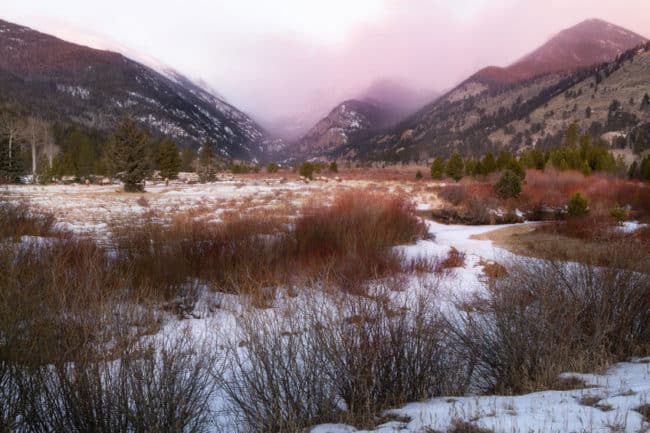 The drive into the Rocky Mountain National Park alone provides views of snowcapped mountains, resident elk herds, and possibly a moose. This park has some of the highest elevations in the country with dramatic views of towering peaks – 60 snowcapped mountains above 12,000 feet.

Bring your snowshoes, cross-country skis, and sleds for some winter time touring. Take a winter hike along the well-established trails to the bottom of a cirque and skate across the frozen alpine lakes. Sprague Lake and Bear lake are great for those visitors who are more into a leisurely winter’s walk than a hike. Be sure to bring warm layers and a camera.

The park attracts people from all over the world to venture into the depths of the mountains to go ice climbing, backcountry skiing and snowboarding, and winter mountaineering Backcountry skiers and snowboarders will find great powder turns in Hidden Valley, an old, discontinued ski resort with plenty of mellow slopes for skiers and riders of all abilities.

Colorado snowpack is known for its instability, make sure to stay clear of avalanche-prone areas unless properly equipped with avalanche gear. 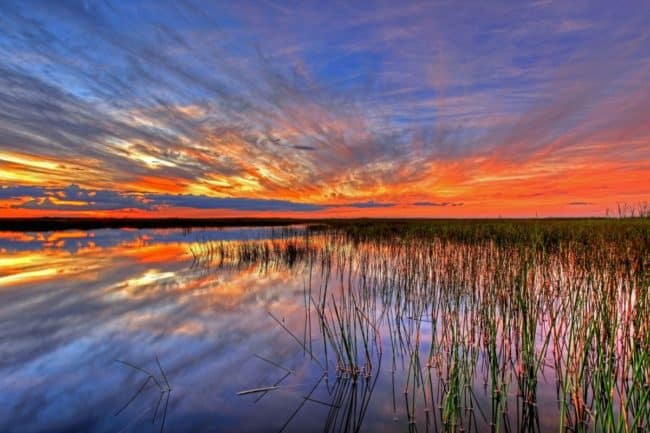 The Everglades National Park is the largest subtropical wilderness in the country, a World Heritage Site, an International Biosphere Reserve, a Wetland of International Importance, and a specially protected area under the Cartagena Treaty.

Winter provides ample opportunity to view wildlife, crocodiles and alligators, manatees, gray fox, hundreds of fish species, and a variety of bird species. Migratory birds settle in here for the winter season and this park becomes a bird watching hotspot. If you are extremely likely, you may be gifted with the sighting of a Florida panther.

The other great advantage of visiting in the dry winter is the mild temperatures (70-80 degrees), the low humidity, and the lower water levels which make it easier to spot wildlife. Take a stroll through the park along their established trails. Canoe through coastal mangroves, sawgrass marshes, and pine flatwoods.

The park is home to ecosystems and wildlife unique to this region of the country. Fall and winter are the best seasons to visit the park.

The Grand Canyon National Park is one of the most visited parks in the United States (about 5 million visitors annually) and one of the Seven Natural Wonder of the World, for a good reason. The canyon is 277 river miles (446 km) long, up to 18 (29 km) miles wide, and 1 mile (1.5 km) deep.

Observe the serenity of the early morning fog and the energy of sunny afternoons. The canyons fantastic warm colors draped in white snow all against the winter grey sky is a sight not to be missed. Not to mention, the stargazing here is world class.

The North Rim is closed during the winter months (October to May), the South Rim is open year-round. Temperatures on the South Rim are generally cold, but the canyon floor on any winter day is warmer reaching to 60 degrees. The winter and fall bring the best temperatures to visit the park and only 10 percent of the visitors. 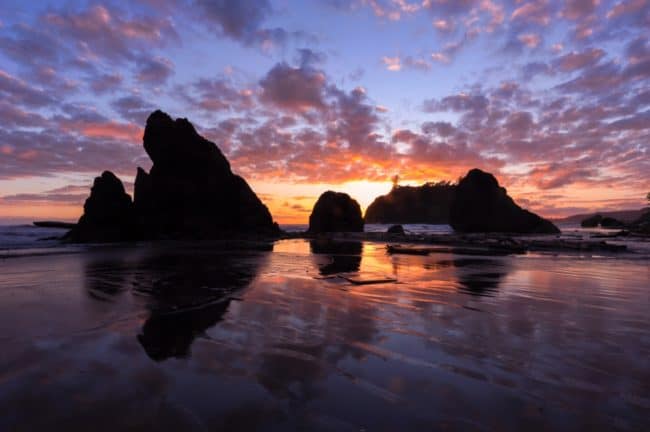 Olympic National Park during the winter months offers a variety of diverse and landscapes and ecosystems. Between the precipitation and elevation of the region, winter in the park provides breathtaking contrasting colors.

The park is almost a million acres. Explore this winter wonderland’s temperate rain forests, breathe the fresh ocean air while walking along 70 miles of cool ocean beaches through the maritime snowpack, and take in the endless views of snow-covered and glacier peaks. These high mountain peaks are set on a beautiful peninsula stage.

Avalanches are common in the winter, so be snow aware or keep your visit to the lower milder elevations.

Olympic National Park is one of three national parks that hosts a full ski area. Hurricane Ridge Ski and Snowboard Area has one lift and two rope tows and runs from December to March (snow dependent). 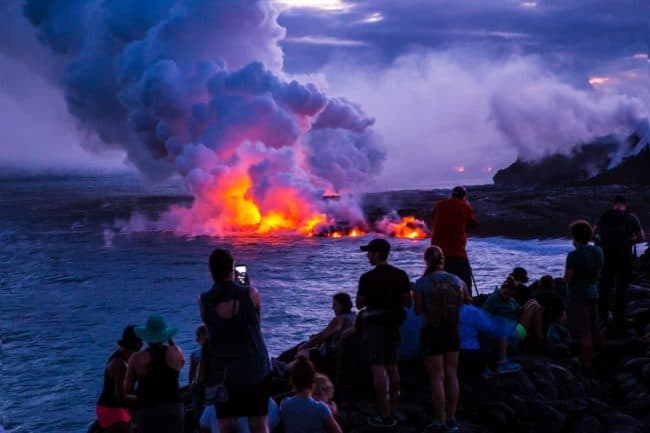 Hawaii Volcanoes National Park is a great winter destination, especially if you are seeking the warmer vacation temperatures. Although winter is the rainy season in the region, the temperatures are in the low 80’s. The park protects geological, biological, and cultural landscapes extending from the sea level to the 13,677 feet.

The tropical beauty alone is enough to convince anyone to visit, but this park is also home to Earth’s most active volcanoes, Kilauea and Mauna Loa. Take a hike to the edge of Kilauea and get a close-up view of the active lava flows. Visitors can see flowing lava and observe its unique movement. The park provides a glimpse into 70 million years of volcanism and evolution of the Hawaiian Island chain.

Big Bend National Park is located in one of Texas’ most remote regions and because of that it is one of the least visited parks in the country. As one of the largest national parks in the United States, it encompasses over 800,000 acres. It is most appealing to visit Big Bend during the winter months as the temperatures stay near 60 degrees. In the summer, the temperatures can reach an uncomfortable 100 degrees or more.

Big Bend serves as a border between the United States and Mexico and only by rowboat can you cross between the two counties. The park is also the largest protected area in Texas. Hundreds of bird species find winter refuge in the mountain ranges and deserts.

With almost 200 miles of hiking and mountain biking trails through desert, riverside, and mountains, this is one of the best winter vacation parks to explore. The Rio Grande, the only Wild & Scenic River in the state, borders more than 100 miles of the park, so take advantage of the opportunity to float it in a canoe. Or soak in the hot springs along the river’s edge.

Visitors enjoy observing the Native American petroglyphs, hiking the Chisos (the only mountain range completely located within the national park), rafting the river, camping, and stargazing.

Visit Our National Parks All Year Round

The National Park Service, of the Department of the Interior, serves to preserve the biodiversity, sustain and recover populations of endangered and threatened species, and maintain and monitor the facilities and human activity within the park. Protecting biodiversity is vital to our cultures, spiritual and aesthetic values, and intrinsic value of species and ecosystems.

By visiting our parks all year round, we are supporting our Earth in a deep and meaningful way.