For the majority of the Pacific Crest Trail (PCT) hikers find themselves firmly in black bear country. In the last 150 years, only one person has been killed by a bear in the PCT states of California, Oregon and Washington in the wild. So, you would be just as likely to die by falling over and landing on a turnip. It happened. At least once.

Historically, grizzly bears roamed the majority of the United States and were even to be found in Mexico, nowadays their population is mostly confined to Canada and Alaska.

There has not been a single death caused by a grizzly bear in Washington, let alone the death of a hiker. The only death by bear in Washington in the wild occurred in Glenwood in 1974, when poor little 4-year-old Victoria Valdez was mauled by a black bear.

As well as the aforementioned grizzly bears in the North Cascades, they can also be found in isolated areas of the Selkirk Mountains. Along the northern border of Washington State in some remote and sheltered spots.

Just to demonstrate how rare these creatures are on the PCT, the last confirmed sighting of a grizzly bear happened in October, 2010. At a location 100 miles north east of Seattle. A hiker in the North Cascades captured photographs of the bear, which was then confirmed as a grizzly by a panel of experts. However, you would need to go back another 50 years to find another photographed grizzly in this area.

The other most recent confirmed sighting was in 1996 by a bear biologist, so it is possible that the grizzlies have retreated north of the border, although there are currently investigation teams out in the wild trying to prove that the bears remain. Prior to that in relatively recent history, there have only been grizzly footprints photographed and confirmed by experts in 1989 and then again in 1991.

How do you not get eaten by a bear?

There is a lot of garbage out there written about how to not get eaten by a bear. Some people say to stare them dead in the eye, while others say not to make eye contact under any circumstances. Some say to play dead, while others recommend acting like that crazy guy in the park pushing a trolley who screams out at the top of his lungs all day long.

The fact of the matter is, you are better to avoid bears if you do not want to attract their wrath. And for goodness sake, do not startle them! If you are heading through an area of reputed bear activity, then it is better to make a bit of noise; sing a song, chat with a fellow hiker, whack a stick on the occasional boulder.

Oh, and traveling with other people is a good thing to do as well. I cannot recall one instance of a bear attacking a group of people.

People love eating tasty, fragrant food. And so do bears. However, bears are believed to have the best sense of smell of any animal on earth, roughly 2,100 times stronger than that of a human. In fact, a black bear was once seen travelling 18 miles in a straight line toward a source of food.

Grizzly bears can smell food even if it is submerged in water, and just to hammer the point home, polar bears can smell seals through the Arctic ice sheet. Of course, this means they can also smell the stuff in your bag from a long way away. Combine this with their curious nature and some improperly stored food, and you could have an unwelcome visitor ruin your hike. 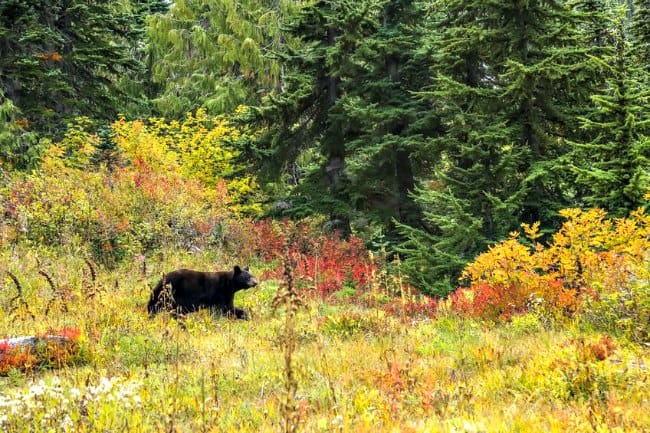 What To Do If You See A Cougar While Hiking

Along certain parts of the PCT it is compulsory to carry with you a bear canister. The roughly 300-mile section between Sonora Pass and Kennedy Meadows is one of those parts, as is a bear-heavy section in Lassen Volcanic National Park.

These canisters do not actually stop the bears from smelling your food, just from being able to devour it. They are designed to protect the bears from consumption of human food, because you know the saying: a fed bear is a dead bear.

What this means for you, is that you should camp somewhere different to where you store your food for the night, and maybe you should store that food downwind of your tent. Also, some sections of the hike include food storage lockers. It would be wise to use them when available.

What else? Do not linger around carcasses (because that would be weird and could also be a bear’s brunch), try to hike in daylight hours, do not bring your stinky cooking clothes into your tent and do not use fruit flavored soaps, shampoos or deodorants. Oh, and never, ever, ever get between a mother and her cub. And carry with you…

This stuff may just save your life. It is very similar to mace or the pepper spray that can be used against other humans. It contains up to 2% capsaicin (the maximum amount permitted by the EPA, who also include a 7.9 ounce volume limit) which is the stuff that makes chilies hot.

When you hold down the trigger of industry leading products (more details below), the aerosol propellant launches the spray up to a whopping 40 feet, and can last anywhere between 4 – 9 seconds.

You should aim for the face of a bear, as the spray will affect the mouth, nose, eyes and lungs. It has been reported that over 90% of bear attacks that involve bear spray have resulted in no injuries to humans whatsoever. When firearms are concerned, that rate drops to about 60%, as firearms are more likely to injure and anger a bear, whereas the spray temporarily incapacitates them.

Sabre Frontiersman Bear Spray – While I do not condone animal testing, I do believe I can make an exception with this spray from Sabre. It has been field tested on actual charging bears by the Elmendorf Air Force Base, and the testers came out on top. It has a range that exceeds 35 feet, and it contains the maximum allowed amount of capsaicinoids.

The manufacturers recommend that you keep the spray on your person at all times, “given that an 800-pound bear charges at a rate of 50 feet per second”. Their spray comes in hip belt and chest belt options that do not contain any Velcro straps (because apparently bears hate the noise of Velcro straps). Also read: The Top 5 Best Bear Sprays

Are black bear attacks on the PCT common?

There have been almost no reported black bear attacks on the PCT. In June 2018 a woman phoned authorities to report a bear attack in California’s Vasquez Rocks Park. She alleged that as the bear approached, she had time to remove a pocket knife from her backpack, unsheathe the blade and stab the bear in the shoulder.

There were no witnesses apart from the woman herself, who suffered a small scratch on the wrist. I am not saying it did not happen. I am just saying that authorities did not find a knife, blood or any bear tracks in the area, which does sound a little bit fishy to me.

Other dangerous animals you may encounter on the PCT

The most dangerous thing you are likely to encounter on the PCT is a snake. Or a rattlesnake to be precise.

The great news is that they will give you some kind of audible warning if you come too close, namely, they will make a rattling noise with their tails. If you see or hear one of these guys, it is seriously best to avoid them.

If they are on the path and you can give them a wide berth, then go around, or wait until it goes away. Do not try to touch them or to fling them away with your trekking pole. Snakes do not take kindly to that. Nor do they enjoy having rocks flung at them.

It is also a better idea to wear long pants, and I would not be caught dead in a pair of hiking sandals in snake country. It is snake-proof boots for me, thank you very much.

The “Must See” Sections of the Pacific Crest Trail