The world we live in today has long been crisscrossed on foot by trails walked on since well before the industrial revolution. Some of these trails even existed before the rise and fall of the Roman Empire. Therefore, there are many hiking trails throughout the world that are extremely long, continuous, and thankfully are still used and maintained by groups dedicated to that trail today.

Some of these longest hiking trails in the world traverse thousands of miles and can go over very harsh terrain. When undertaken, these trails will leave you hiking for the better part of many months and through all types of weather conditions and biospheres.

All of these trails are also still widely used and traversed today so you should have no problem finding them and getting out there to hike. Because these trails are all varying lengths, they are in no particular order for this list.

What is the longest hiking trail in the world? Here’s the top 10:

The American Discovery Trail is a system of trails (and some roads) that connects the continental United States from the Atlantic to the Pacific ocean. There are two different routs that can be taken.

The northern route goes through Chicago which is about 4,834 miles in length, and the southern route that takes hikers through St. Louis is about 5,057 miles. The trail starts in Delaware on the Delmarva Peninsula and ends in northern California at the coast of the Pacific Ocean.

Throughout the American Discovery Trail, hikers will traverse over the Appalachian Mountains, across the Great Plains, through the Rocky Mountains, and finally the Sierra Nevada Mountains until they hit the west coast. If you truly want to see what America is like, hiking this trail will give you a complete overview of the different places that it takes hikers through.

This trail is also pretty cool because it in the only non-motorized coast to coast trail and it can be traversed almost fully on horseback.

The Grand Italian Trail is a trail through Italy that spans the country and is about 3,831 miles long. It takes hikers from Trieste in northern Italy, across the entire Alpine Arc, across the entire Apennine mountain chain, through Sicily and Sardinia, and finally ends at Santa Teresa Gallura in Sardinia.

This trail was only recently revived for use from around 1983 to 1995 when a collection of mountaineers and the Italian Alpine Club (who sponsored the trail) were able to make the first official trek through the Sentiero Italia. It took them eight months to complete this journey. Thankfully, this trail is also broken up into 368 individual legs for everyday use. I

The Pacific Crest Trail is one of the more well known long distance trails in the world especially for thru hikers. It spans the length of the west coast of the United States of America and is about 2,653 miles long. It starts on the U.S and Mexico border just south of Campo, California and ends at the U.S and Canadian border at Manning Park in British Columbia. 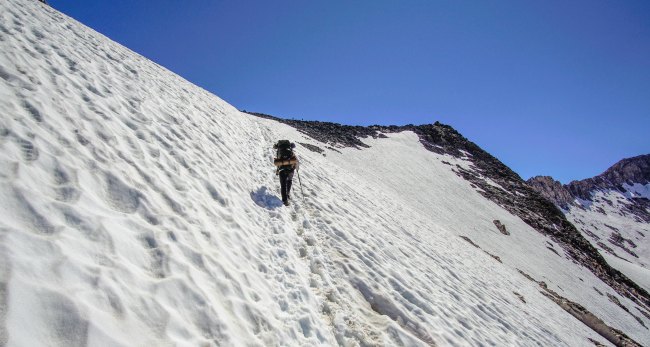 A thru-hiker on one of the longest hiking trails in America – The PCT.

The Trans Canada Trail was officially renamed as The Great Trail in 2016 but was started in 1992 shortly after the Canada 125 celebrations. The Great Trail runs across Canada from east to west and extends for nearly 15,000 miles. It is the longest recreational multi-use trail network in the world.

Many miles of the Great Trail come from a rail to trail program where old freight lines are converted into walking and biking trails. Although The Great Trail is funded primarily through a non-profit group called Trans Canada Trail, each individual section of the trail is owned and operated at the local level.

Currently, The Great Trail is being updated and added on to by replacing interim roadways, adding green-ways next to dangerous road sections, repairing sections of the trail and new trail sections are also being incorporated. There are more than 400 different community trails that are a part of The Great Trail each kept up by local conservation groups and governments.

The Hokkaido Nature Trail sits on the main northern island of Japan and is about 2,900 miles long. It will take hikers through amazing and remote landscape including glaciers, volcanoes, forests, and lakes. The Hokkaido Nature Trail links many of the countries national parks together as well as spots that are of cultural interest to visitors. Beyond that, much of the land traveled over is actively volcanic so watch out.

Unfortunately, there is not as much information on this trail in English so speak with a local or a guide company if you want to attempt to tackle this amazing trail. However, if you know how to read in Japanese, there is some good information online about the Hokkaido Nature Trail.

The Appalachian National Scenic Trail, or more commonly the Appalachian Trail for short, spans about 2,200 miles. It stretches vertically in the United States from Springer Mountain in Georgia to Mount Katahdin in Maine. It is thought to be the longest hiking-only trail in the entire world and approximately 2 million people every year hike on some part of the Appalachian Trail.

There is also an International Appalachian Trail that continues further north across Maine, up into Canada, and continues into Greenland. There are even sections of the International Appalachian Trail that are in Europe and Morocco. To the south, there are sections of trail that go through Alabama and then into Florida creating what is commonly known as the Eastern Continental Trail.

The idea for the trail was conceived around 1921 and the trail was completed in 1937. Since then, it has been managed collectively by the National Park Service, the United States Forest Service, and a non-profit called the Appalachian Trail Conservancy. The trail passes through 14 different states on it’s route along the Appalachian Mountain Range.

Te Araroa Trail is better known as The Long Pathway and was officially opened in December of 2011. It spans New Zealand’s largest two islands along their coast’s from Cape Reinga to Bluff and is about 1,900 miles long. The trail itself is made up of a mixture between older railway tracks, walkways, new tracks, and some of it is linked by roads.

Related article: Tongariro Crossing: One of the Best Day Hikes On Earth?

There are plans to eventually reduce the road sections to less than 5% of the entire trail. The Te Araroa Trail takes hikers from high volcano’s all the way down to beautiful beaches along the coast. The trail is broken up into 300 different individual sections ranging from 1 hour of walking to a 9 day section.

If you have ever wanted to explore New Zealand completely, check out the Te Araroa Trail even if you only have time to hike one section. 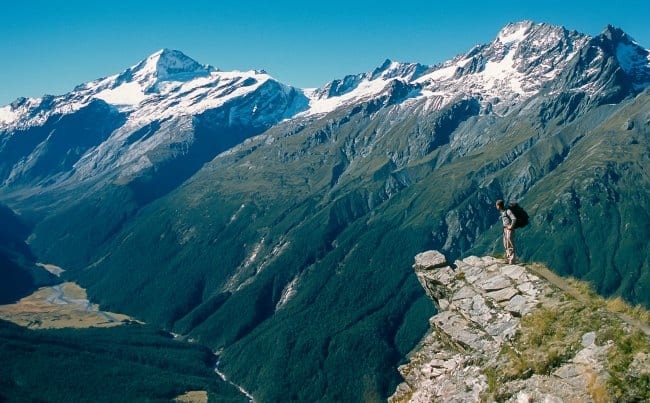 The Camino de Santiago, better known in English as the Way of St. James, is a network of paths and trails that people have used for thousands of years to make a pilgrimage to the shrine of the apostle Saint James the Great. They go there because of the cathedral of Santiago de Compostela in Galicia in northwest Spain. This is where the remains of the saint are buried and people travel to worship.

There are routes leading to this cathedral from all over Europe but some of the most popular starting points in France include Paris, Arley, and Le Puy. There are also starts in Lisbon, Oviedo, and many other places throughout Europe all leading at this same cathedral.

The South West Coast Path National Trail is the longest continuous trail in England. It stretches across the country on the coast for about 630 miles from Minehead in Somerset all the way to Poole Harbor in Dorset. Originally the trail was used for the Coastguard to walk from lighthouse to lighthouse to catch smugglers so the trail itself is very close to the coast.

It also has a lot of elevation gain. In fact, there is so much elevation gain on this trail that it is about 4 times that of climbing Mount Everest.

The Continental Divide Trail splits the United States of America and run for 3,100 miles from the New-Mexico and Mexico border till Glacier National Park where hikers then reach the Canadian Border. It runs through New Mexico, Colorado, Wyoming, Montana and Idaho and follows along the nations Continental Divide.

Also read: How Much Does It Cost to Hike the Continental Divide Trail?

This is the point at which if you are facing north on the divide, water to your right would flow to The Gulf of Mexico and water to your left would flow out of the Pacific Ocean. The trail itself is basically 70% complete with the other 30% of the trail either being worked on actively or is roads or dirt roads that need to be hiked along to reach the next section of true trail.

Thru hikers love to attempt and complete these three trails all in the same calendar year in order complete the Triple Crown.

Here is a short list of other notable long trails. These trails were not included in the list because they are either unconnected or incomplete in some way. However, they are being worked on and can be hiked with extra planing and careful preparation for the journey.

If you are planning on trying to hike or backpack any of these trails continuously, make sure you are well prepared. Know the starting and ending points of the trail as well as where you will be able to camp, get clean drinking water, and restock your food supplies.

Also, knowing where aid stations are and where town and cities are located along the route could be the difference between spending a few days going hungry and being able to restock at the perfect time.

Finally, because of the distance that these long trails encompass, starting your trip at the exact right time will let you hike through spring and all the way into fall. If you start too early or late, you will potentially be forced to hike through harsh conditions like sleet and snow or be forced to stop before the end of your journey.

These trails are also typically sectioned out into individual sections ( aka section hikes) for day hikes so if you are interested in hiking on one of these trails, do some of your own research and you will probably be able to find where these sections begin and end. For those that just want to hike the trail for a day, a weekend, or a week or two you will be able to find good sections of these trails to spend time on.

Up Next In Thru-Hiking and Trekking:

How To Mentally Prepare For a Thru-Hike: Tips, Tricks and Advice

I was surprised by some of the choices you made, especially the lack of the long distance trails in Western Europe. The Camino is really not the best choice. I personally hike the GR10, a 600 miles trail going from the Atlantic coast to the Mediteranée coast across the Pyrenées. It is spectacular as most of it is above treeline. There are many refuges along it and you may even do the entire trail without a tent! Relatively few people do it. During my hike I only met 3 Americans. Also in the Pyrenées there are 2 other options: The GR11 in Spain and the High Road. These 3 trails cross the Pyrennées in the East-West direction. Another very long trail is the E5 going from the Netherlands to the Mediterranean coast. The second half from Geneva to Menton (after called GR5) is spectacular too. I think you should look at them, you will be surprised. I enjoyed your article.