Have you heard about that Blue City, hidden by the Rif Mountains in the north of Morocco? That place with the seemingly-difficult-to-pronounce name of Chefchaouen (but is actually so much fun to say, and just rolls off the tongue – think a cooking chef, the Shah of Iran and when, as in, when the heck is he going to get on with it?! And you have something like: Chef-Shah-when. See? Fun.

There really is something quite magical about beginning a hike of the Rif Mountains from Chefchaouen, the city first painted blue by the Jewish refugees that fled there in the 15th century following persecution in the Spanish Reconquista.

Start by winding up through the old sky-blue city, climbing over cobbled staircases while ducking between narrow alleyways concealing bustling souks and market-stalls.

The beautiful blue of the architecture throws unrivaled contrasts to every single color around; from the red, yellow and green of the pot plants hanging from the blue walls to the purple and pink flowers that climb from inside, everywhere you look is a feast for the eyes.

“..from the summit I could see all the way across the Mediterranean Sea to Spain, and up to the snow-capped peaks of Granada’s Sierra Nevada.”

Chefchaouen is built on a mountain, and to get anywhere you have to climb. So the beginning of the hike is a breathless ascent out of the medina. Yet, over the tops of the blue houses appears a green pine-clad forest, that leads to the peak of Jebel El Kelaa, standing high above the town, sandwiched by blue between the city and sky.

Then imagine looking up at the distant peak of Jebel El Kelaa, with all that beauty in between, and imagining not wanting to climb it. What, are you crazy or something? 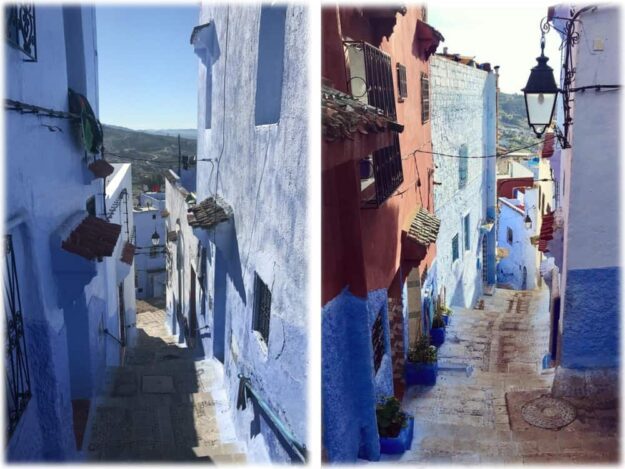 The sky-blue houses of Chefchaouen. On the climb out of the city..

The web is littered with tales of hopeful summiteers setting off early from Chefchaouen, only to lose the trail completely, leaving them no option but to head back down, usually recounting stories of being spooked by packs of roaming dogs. I read that one blogger attempted the climb on four different occasions, only to return defeated every time.

So I will confess two things early in this article, the first being that without the help of the app MapsMe, I probably wouldn’t have found the way to the summit. The second, is that I met a pack of dogs on the way up. And they were not the friendliest (but I will tell you how to deal with those guys a little bit later!).

It may add a mile or two, but I would highly recommend beginning this hike through a small pine forest right on the edge of the city. If you punch Hotel Atlas Chaouen into your gadgets, it should take you this way. Once at the top of a short-yet-breathless climb, head around the football field, turn left onto the road, and then right at the roundabout and make your way diagonally through the park.

Follow your nose uphill toward the dense forest above, and you will find an unmistakable path that heads up through it. Take a right turn (Route de Tisemlale) and gently climb up a wide gravel road until the path joins the steeper trail that climbs up from the other side of town.

This is the way that I chose to climb, but at the time (end of 2018) there was a tricky, exposed section to negotiate, with an airy drop-off to the right if you are not careful.

This steeper section can be taken, instead of climbing into the pine forest, by following the wall around the top of the city toward the waterfalls. There is a path that veers up and off into a ravine.

That is your path. I am not putting you off this route, it is spectacular, with steep views back down over Chefchaouen, but be prepared. Wear good hiking boots with excellent traction, because you will need to use every single lug on your sole to stay upright.

The path levels off for a while. Enjoy the crazy rock formations that appear to the left. One of them kind of looks like a dinosaur. Kinda. What do you think? 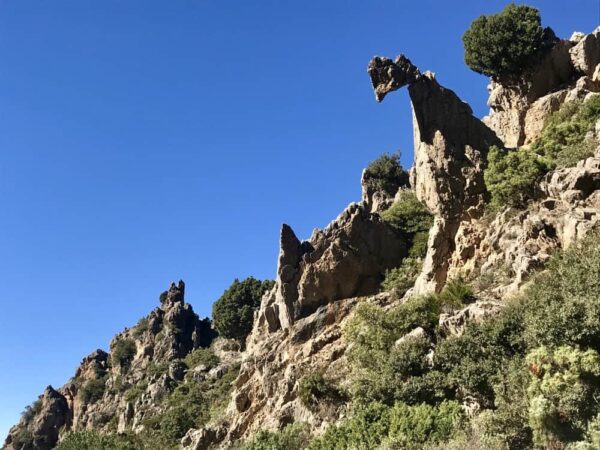 Yep.. definitely seeing a dinosaur there… what about you?

If I gave you a blow-by-blow account of the way to the top, this would be a book, not a blog post, so download MapsMe if you haven’t already, because you will find it invaluable on this hike.

And it is unbelievably rewarding. The final scramble to the top is nothing short of fun, and from the summit I could see all the way across the Mediterranean Sea to Spain, and up to the snow-capped peaks of Granada’s Sierra Nevada.

It is a sight worthy of a pew and good long while of appreciation. Oh, and I had this hike all to myself. The whole day.

How Difficult Is Hiking in the Rif Mountains

The absolute most difficult part of this trek is the navigational aspect. Without one clear well-worn path, no signs and nothing in the way of useful maps, you have to rely on the interpretation of a mobile phone app. It does a pretty good job, but at times you will find yourself retracing your steps as you look for a better path.

If you do manage to stay on the path, this can be classed as a moderate-grade hike. But. But, if you do stray from the best path, as you most assuredly will, prepare for a bit of scrambling.

At one point I found myself the smallest distance from the MapsMe marker, yet to get back on it involved a near-vertical climb up a slope that required my hands just as much as my feet. It wasn’t easy. So for that reason I have to say that without a guide, this is a moderate to difficult grade of hike.

At certain times of the year you will be wandering through huge marijuana fields, but do not let this put you off. This is the largest hashish-producing region in the entire world, so it would be a little bit strange if there were no plantations. It is the norm here, and nothing to be worried about. It would be safer than walking through a wheat field in Kansas.

I mentioned at the beginning that I was accosted by a pack of dogs. And it was a little unnerving at first. But I soon realised that the barking was all for show. Whenever I waved my trekking pole through the air their confidence waned. So I picked up a big rock and they bolted with their tails between their legs.

Shout, wave your trekking poles and throw rocks, and these dogs won’t come anywhere near you. If you’re still freaked out, hire a guide from Chefchaouen. Every single man, woman or child will either want to take you, or know someone who can.

Bring plenty of water. You are hiking in a dry, desert-like environment. Temperatures in summer climb comfortably into the 90s – sometimes more – so be prepared. Hiking shoes are necessary over the lunar-like landscape, littered with football-sized rocks and scree. 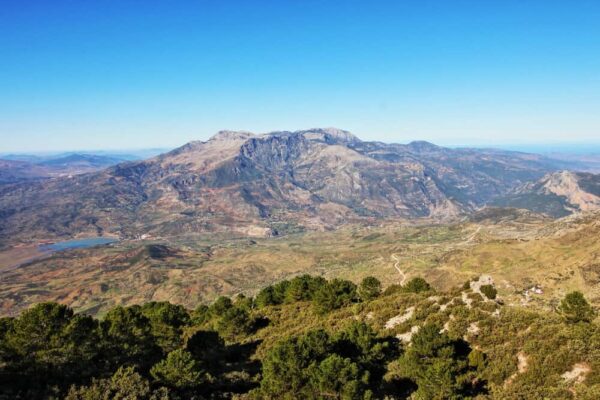 View from the summit of Jebel El Kelaa

Most people traveling to see Chefchaouen will fly into Tangier, and from there your options are limited. I had travelled a long way to get there and I was exhausted, and so negotiated at taxi from the airport to take me the 75 miles, or a little over two hours.

This is easily the most convenient way, although prepare to pay about US $70 for the privilege. Much has been written on the public grand taxis of Morocco. And I have read of many people successfully getting to Chefchaouen in these shared taxis, however there were none at the airport when I arrived, and I therefore cannot weigh-in on this one.

You can take a taxi to the bus station and get the bus to Chefchaouen. Being the cheapest option, it is of course the slowest and most dangerous, although the roads up the mountains have been widened and you would have to be pretty unlucky to be involved in an incident.

If you find yourself in Fes, you can also get a bus from here to Chefchaouen.

Best Time Of Year To Hike The Rif Mountains

The spring months of March to May and the autumn months of September to November are the most popular times to visit the region. And it will feel a lot like paradise during these months. If the heat does not bother you, don’t be shy of visiting in the summer months as, being up in the mountains, Chefchaouen is a lot cooler than other parts of Morocco. It is for this reason that the town remains busy from June to August.

It does get cold in the Rif Mountains in winter, but that being said, my visit was in the first two weeks of December, and I don’t believe I saw a single cloud the entire time. It was just perfect, while the crowds had all left for the year. 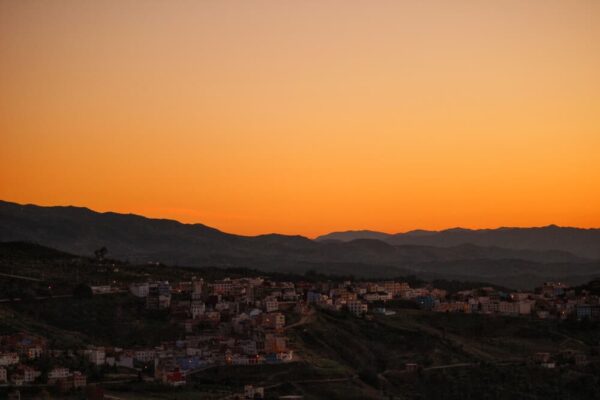 Sunset over the Rif Mountains, and the end of a long day..

Where to stay in Chefchaouen

There are an abundance of hotels, guesthouses and hostels in the Blue City, so it really depends on what you are looking for. I stayed at Pension Souika when I arrived, but was annoyed by the 6am cleaning policy (and my alarm clock: the mop bucket sliding noisily over tiles), so I moved to the well-reviewed Riad Baraka, and I am so happy that I did.

My double en suite room in the hostel/ guesthouse was beautifully decorated, the staff were wonderful and loved answering questions, while the stairs led to a lovely little open roof-top terrace with drool-inducing views over the city and the Rif Mountains: Riad-Baraka.net

Up Next In Trekking:

Which Sunscreen is Best for Trekking?

Should I Carry One Trekking Pole or Two?